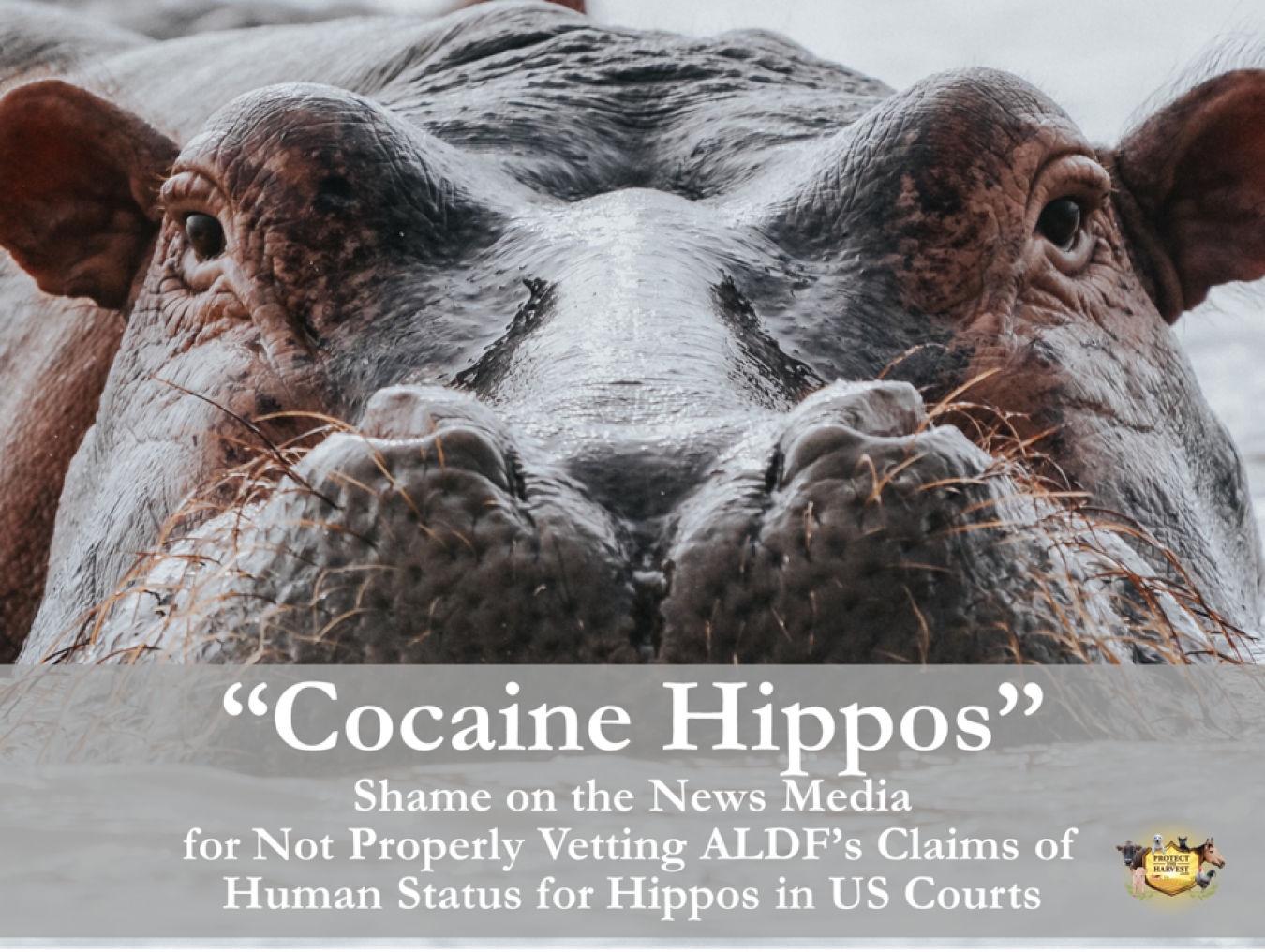 Expert animal law attorney Michelle Pardo, calls out the Animal Legal Defense Fund's false claims (and many press releases) about Hippos being recognized as human in US Court.
Just another example of how far radical animal extremist ideologues will go to push their agenda.

Shame on the ALDF - they know better but obviously will throw ethics to the wind in order to create a narrative of their liking. They pushed out disinformation on purpose.

Shame on international news outlets for pushing out the story without properly vetting the ALDF's claims.

Keep in mind that the goal of animal extremist groups is to classify animals as people in order to remove them from human care. 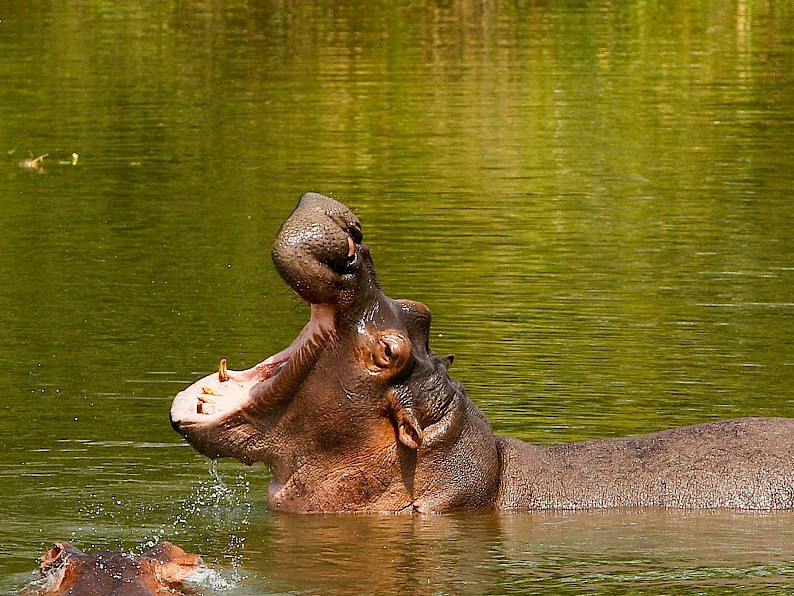 "In the past several days, the internet has been aflutter with reports that a U.S. court had declared infamous drug lord Pablo Escobar’s hippopotamuses to be “people.”

There were at least 19 such reports. These reports seem to stem from an October 20, 2021 post on the website of the Animal Legal Defense Fund (ALDF) concerning a ruling by a federal district court in Ohio on an application for domestic discovery in aid of a foreign proceeding. ALDF entitled its post, “Animals Recognized as Legal Persons for the First Time in U.S. Court.” Calling this ruling a “critical milestone,” ALDF proclaimed that the court had “recognized animals as legal persons for the first time in the United States.”

Notably, ALDF’s post had no link to the actual ruling of the court. Nor did any of the other internet articles that we could locate. A further examination of the docket revealed the nature of this limited matter and the perfunctory decision.

The case, captioned Community of Hippopotamuses Living in the Magdalena River, Applicant, To Issue Subpoenas For The Taking of Depositions Pursuant to 28 U.S.C. § 1782, No. 1:21-mc-00023-TSB-KLL (S.D. Ohio), was an application by an ALDF lawyer and another lawyer under 28 U.S.C. § 1782 for an order to take the testimony of two U.S. witnesses for a case pending in Colombia. The Colombian lawsuit in question is an action to restrain the Colombian government from using lethal methods to control a population of hippos that emanated from Escobar’s private menagerie, that escaped, and that now live in the Magdalena River Basin. The application seeks the testimony of two U.S. witnesses who apparently have knowledge of ways to control animal populations with non-lethal birth control methods.

Under section 1782(a), an “interested person” can seek an order from a federal court allowing discovery to be taken in support of a foreign proceeding. Contrary to the implications of its internet posting, ALDF did not argue that the hippos are “persons” and therefore covered by section 1782(a). Instead, they argued that because Colombian law permits animals to sue, the hippos were parties to a foreign lawsuit and, on that basis, were to be considered “interested persons.” Indeed, ALDF effectively recognized that the hippos were not persons under U.S. law. They argued that because the hippos were considered to be litigants in Colombia, they must be recognized as “interested persons” under section 1782(a) “even if they would not be recognized as persons in our domestic legal system for other purposes….” Application, p. 8 (emphasis added.)

As ALDF also knows from its own litigation in the U.S., an animal will be considered a “person” only if the legislature says so. Section 1782 does not have its own definition of “person,” so one must look to the Dictionary Act, 1 U.S.C. § 1 which provides that “unless the context indicates otherwise … ‘person’ … include[s] corporations, companies, associations, firms partnerships, societies and joint stock companies, as well as individuals.” Animals are not mentioned. And animals aren’t “individuals” because the ordinary meaning of that term is “human being.” All of this was established in ALDF v. USDA, 933 F.3d 1088 (9th Cir. 2019), where ALDF tried unsuccessfully to argue that a Bengal tiger is an “individual” within the meaning of the Freedom of Information Act.

ALDF’s application was ex parte – which means that no one was there from the other side in the Colombian case to oppose it. The entire case was over and done with in a single day: October 15, 2021.

It is also important to note that, contrary to the implications of ALDF’s internet post, the court made no finding that hippos are “legal persons” or people, or anything close to that. In fact, the order makes no findings at all. All the court did was sign the order in the form that the applicant’s lawyers drafted. The entirety of the court’s order is posted below: 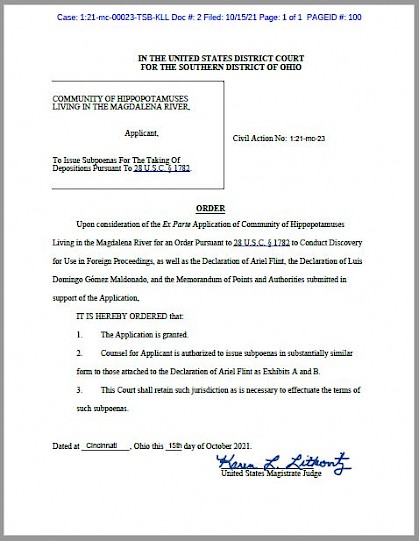 So, despite commentary on the internet, hippos have not been declared to be people in the U.S. Hippos can get discovery in the U.S. (at least in the Southern District of Ohio) for cases they bring in Colombia but that is the extent of it. They are not “legal persons” under U.S. law."

Michelle Pardo is a Protect The Harvest Advisory Committee Member