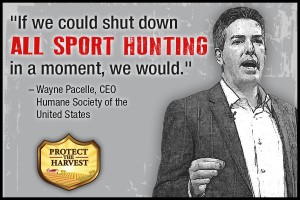 Starting off the 2013 year, the Humane Society of the United States (HSUS) is hard at work, forcing its extreme animal rights agenda on California sportsmen. Hunters and fishermen in California have been a target of HSUS' anti-hunting ideologies and legislative policies for several years. One of the first attempts made by HSUS was through a failed 2003 proposal that would have eliminated the use of all hound dogs for hunters. Although it failed, HSUS' agenda hasn't altered one iota. In 2012, under the pressures of HSUS, California lawmakers voted to approve a ban on the use of hounds while hunting bears and bobcats, and lawmakers continued receiving advice from HSUS, by renaming California's State Department of Game & Fish - to 'Game & Wildlife.' Now, fast forward to the year 2013 and HSUS is still on the prowl. This Friday, HSUS and fellow animal rights groups are expected to release a proposed bill that would eliminate the use of lead ammunition for ALL hunters in California. Eliminating lead ammunition drives up costs for sportsmen and in turn, places additional unnecessary burdens on hunters statewide.

"These people want to ban hunting. Go to their cocktail parties and snuggle up to them, and that's what they'll tell you," said Don Saba, a member of the NRA board of directors

In 2007, HSUS influenced California Gov. Schwarzenegger to sign a bill that banned lead ammunition for a specific portion of central California. Leaders within HSUS have lifelong goals to see the rights of California hunters stripped away and this attempt for an all encompassing lead ammunition ban doesn't come as a surprise to us:

“We are going to use the ballot box and the democratic process to stop all hunting in the United States ... We will take it species by species until all hunting is stopped in California. Then we will take it state by state.” - Wayne Pacelle, CEO & President of HSUS

California sportsmen will continue to be under the scrutiny of HSUS' radical agenda until 'all hunting is stopped in California.' HSUS' successful efforts come from several years of work, slowly chipping away the traditional rights and freedoms of California hunters. They continually say one thing and mislead you into another. Don't be deceived by this attempt to ban lead ammunition, it's nothing more than a skillful ploy to further their agenda to eliminate ALL rights for California sportsmen.
Prev Article
The Largest Lake Trout Ever Caught Through the Ice
Next Article
Missouri Right to Farm Amendment Clears First Hurdle With Ease