Preliminary Federal Election Commission (FEC) filing reports for the Humane Society Legislative Fund (HSLF), also known as the political arm for the Humane Society of the United States (HSUS) were recently compiled by OpenSecrets.org. In 2012, HSUS increased campaign spending by doubling amounts from 2010. HSUS' 2012 FEC filings indicate they spent more than $1.45 million attacking American farmers and ranchers. Now that the elections are over, HSLF celebrates their "endorsed candidates" winning percentages of 83.3% for U.S. Senate candidates and 92% for U.S. House candidates. They claim money was used for "aggressive direct mail, phone banking, and grassroots outreach." That may be true. But, they forgot to take into account their losses on this year's investments. HSUS spent $1.45 million spreading an animal rights agenda and $1.16 million of that came as a loss. They wasted $1.16 million either supporting candidates who lost or attacking candidates who won. Despite HSLF spending $750,000 attacking Congressman Steve King, he still won. We were able to run our own TV ad against HSUS: That brings over 80% of their total budget returning as a bad investment. A far cry from their claimed victories of 80 and 90%. The big lie rests in the fact that they continue to misled their donors. They essentially lost $1.16 million in the course of a few months and neglect to inform donors how much they lost. Wonder how long it takes for them to fundraise that same amount? Year after year, HSUS continues to spend more and more promoting their anti-agriculture, anti-sportsmen, vegan agenda through the "democratic process." In 2010, HSUS spent $750k. In 2012, they spent $1.45 million. HSUS is on a mission to destroy American Agriculture and they have the checks to prove it. 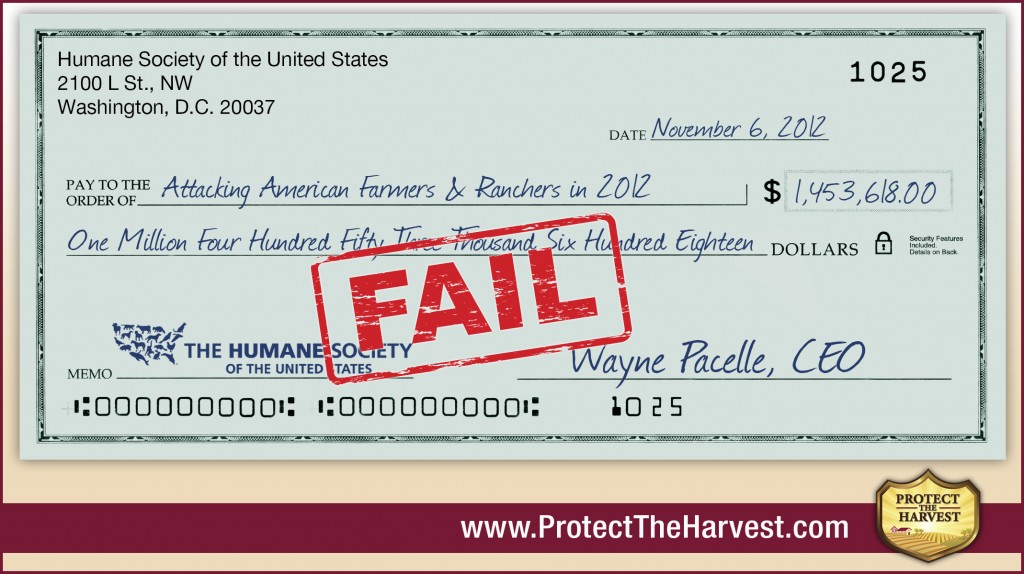 More FEC filings are yet to come, we will keep you posted for updated figures.