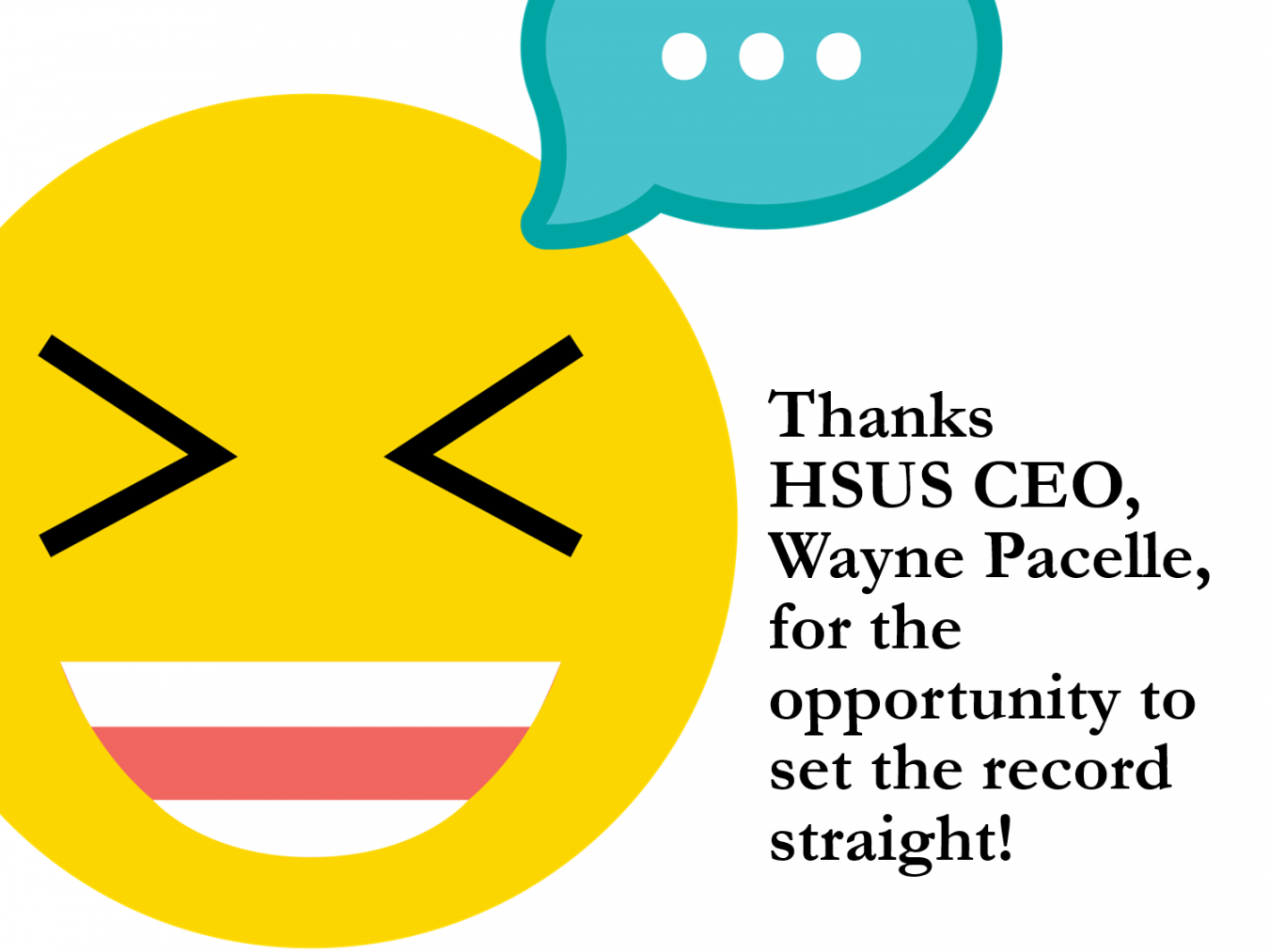 Wayne Pacelle CEO and President of the Humane Society of the United States latest blog post regarding the USDA’s consideration of third-party inspections is interesting, and frankly quite humorous for those of us who know his true agenda. He has clearly exposed his hypocrisy. There is no doubt that he would be “all in” if the HSUS and other affiliated animal rights extremist organizations were given the third-party authority to conduct inspections.

Pacelle’s false accusations and deliberate misrepresentation of Protect The Harvest shows his mind set and that he’s basically having a temper-tantrum because he is not getting his way. He is losing control and the influence the HSUS has spent millions and millions trying to develop in order to push their animal rights agenda. Even though he has made false and misleading accusations, we want to thank him for making his followers aware of Protect The Harvest. He has provided us with an excellent opportunity to set the record straight because we know there are many animal lovers that have been mislead by the HSUS:

The HSUS and other animal rights extremist groups are incensed that the USDA database was modified because they were using it to target and attack innocent USDA License Holders. This modification is not something new. This change was in the works with the previous administration (at least six years). The changes made to the database was not a surprise for Pacelle, he was aware that it was coming but has selective recall in order to fit his narrative. We know that there are some commercial breeders that would like to have more information available to the public and understand their reasons. However, we believe that the safety and well-being of those who work with animals is important to protect. That is why we support and understand the modification of information available on the USDA website.

Wayne Pacelle is referencing Proposition B in Missouri which was on the Ballot in 2010, when he is making his claims that we don’t care about the well-being of dogs. Prop B was given a title designed to hit people in the gut and whip up emotions. HSUS referred to Missouri as the “Puppymill” State. It was launched by a letter from Wayne Pacelle, to the Missouri State Legislature. The HSUS spent millions of dollars on this deceitful campaign. There were hidden provisions that reached far past the name of the proposition. One of the key issues is that the word “pet” was used, which in the Missouri Constitution, is anything that can live within 15 feet of a home. Prop B threatened the state’s entire agricultural industry.

The way the proposition was originally written, it would have done absolutely nothing to improve the well-being of animals. Instead, it would have added excessive expenses to responsible breeders. Animal Rights groups are looking for inroads to further push their agenda. When considering the initiatives the animal rights extremist groups are writing, supporting and funding, it is important to keep in mind their end goal. Their goal is to eliminate ALL pet ownership.

We do support animal ownership, animal agriculture and dog breeders. We support responsible animal ownership and breeding with measures that are scientifically sound. We make absolutely no apologies for opposing Proposition B even though the HSUS has used the title against us for years in their smear campaigns.

Most of us at Protect The Harvest have pets, and many of us own, show and breed livestock. Additionally, some on our team have spent many years working in the veterinary industry. Animal Welfare is very important to us. We have not fought against “any and all animal welfare standards” as Pacelle rants. We have done just the opposite. We educate the public about unnecessary legislation and regulations where there are already protections in place for animals. We also educate about legislation and regulations that have far-reaching consequences and that will impact animal owners, whether they simply have pets, raise and show livestock, or are involved in animal agriculture.

The HSUS has mastered the art of deceptive advertising and marketing. They propose legislation and regulations that on the surface can sound like a good idea, especially to those who love animals. Animal rights extremist groups that are heavily involved in legislation, like the HSUS and their affiliate the Humane Legislative Fund, count on the fact that often the general public will only pay attention to their cleverly crafted sound-bites and not take the time to read the language or consider the far-reaching consequences.

Animal welfare is so important to us that we have not been afraid to stand up and address the reality of sensitive and emotional issues. Over the years we have been working hard to find solutions to the horse over-population crises on our American range lands. Our Wild Spayed Filly Futurity program is a testament to our commitment. The goal of the Wild Spayed Filly Futurity is to showcase the significance and abilities of these resilient, tough and beautiful horses. It will also demonstrate their trainability and hopefully encourage more people to consider a horse from our American range lands. A second and very important goal of the program is to help find economical, safe solutions in controlling the numbers of horses on American range lands which will allow people to appreciate them in a healthy, balanced environment in the wild.

We usually don’t share the HSUS’s information directly because we don’t want to support them in any way. However, in this case, we are going to make an exception. Obviously, we are starting to make an impact in our efforts to push back against Pacelle’s agenda and the activities of animal rights extremist groups and we are proud of that. Here’s a link to Pacelle’s post so you can read it for yourself: https://blog.humanesociety.org/wayne/2018/01/usda-ponders-disastrous-plan-eliminate-government-inspections-licensed-breeders-zoos-researchers-allow-self-policing-third-parties.html

Prev Article
Why is the news media helping PETA push their agenda?
Next Article
Why Are Animal Rights Extremist Groups Allowed to Get Away with False Accusations?