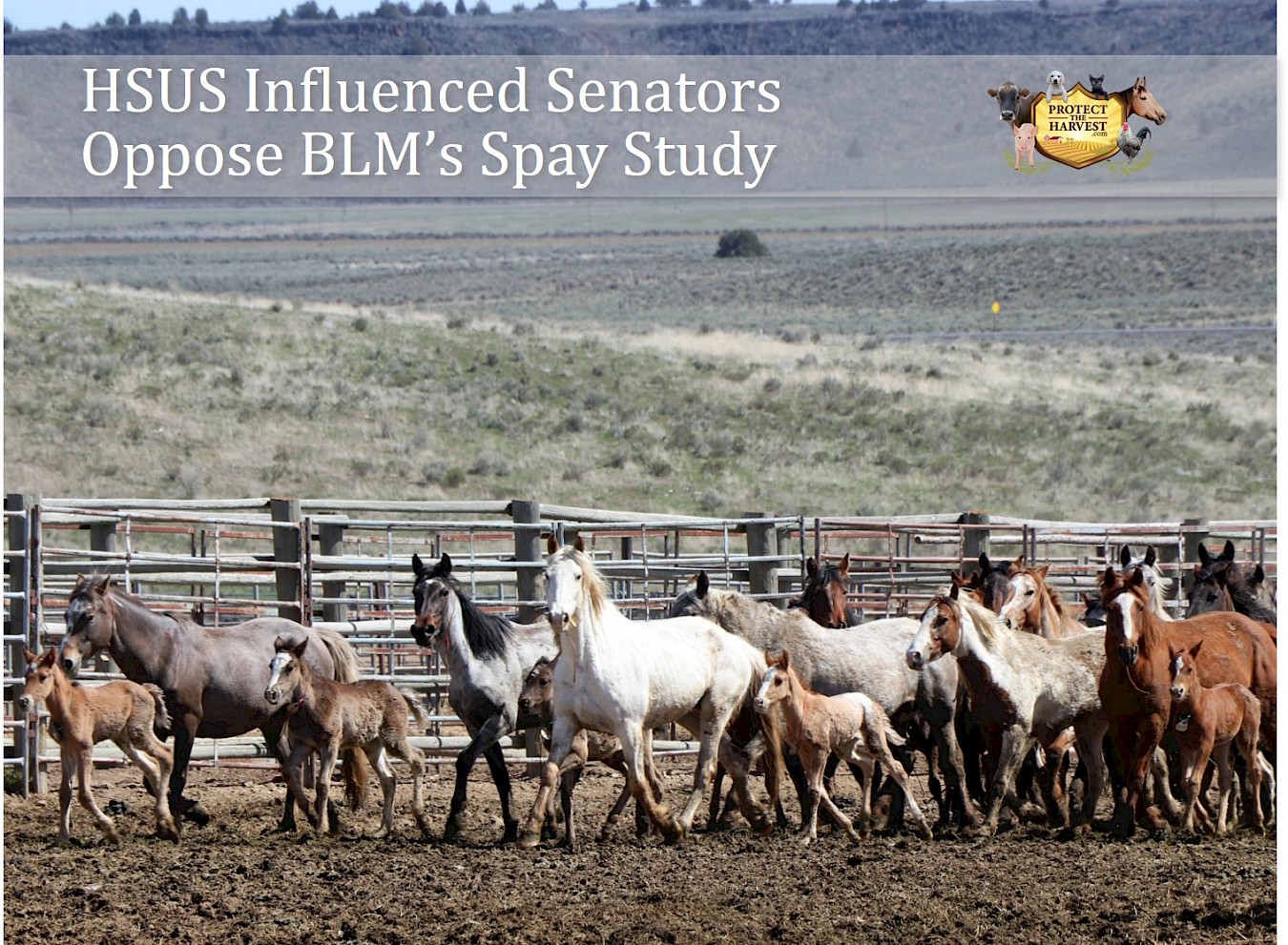 What They Are Opposing - Background on Spay Feasibility Study
On July 17th, 2019 eight Democratic U.S. senators signed and submitted an opposition letter to the Bureau of Land Management in regard to their spay feasibility study. The study’s intent is to test the viability of spaying as a tool for herd management and population control. The mares are sourced from the Warm Springs Herd Management Area (HMA) and will be monitored not only to ensure their wellbeing after the procedure but for years afterward, once released back onto the range. This will provide further insight as to whether spaying effects herd behavior and dynamics. According to the BLM website: “This project is part of the BLM’s effort to achieve long term sustainable populations on the range in a humane manner.” This assessment is to begin towards the end of this year.
For additional information about the Warm Springs Spay Feasibility Study click HERE.

Why These Senators Oppose Spaying – They Are Animal Rights “Award Winners”
The Humane Society of the United States (HSUS) is an Animal Rights organization that works to influence legislation and lawmakers via their Humane Legislative Fund. Their Humane Legislative fund provides “awards” to lawmakers, along with that a lot of free public relations work and of course campaign donations. Therefore, it is no surprise to learn that every one of the eight opposing senators has received the HSUS “Humane Legislator of the Year” award. Sen. Cory Booker was even awarded their “Humanitarian of the Year” award in 2017.

The Senators Are Certainly Not Horse Experts or Veterinary Experts
While these senators may be experts in pushing the animal rights movement, they are certainly not well-versed in animal husbandry, especially when it pertains to horses. We argue that all of the information they have received about this issue is sourced by the groups like the HSUS, which only offer a skewed version of the story. In contrast, the BLM has made the decision to move forward with incorporating spaying as a tool for herd management with the supervision and experience and professional opinions provided by veterinarians who are true animal welfare experts, range scientists, and wildlife biologists.

Most of the Senators Are Not Even Located on the West Coast
Five of the eight senators do not even live in a state dominated by federally administered rangeland or where wild horses reside. For example, Corey Booker (D-NJ), Ed Markey (D-Massachusetts), Richard Blumenthal (D-Connecticut), Robert Menendez (D-New Jersey), and Christopher Coons (D-Delaware) are from the east coast. This fact widens the disconnect between the politicians and this issue.

HSUS Endorsed Senators Endorse HSUS Patented Pesticide
The HSUS holds the patent for the PZP vaccine, which they offer is “broadly supported and poses significantly less risk” to the wild horses. While the former may be true, the latter is not. The public’s support of the PZP injection is based on a lack of knowledge of the vaccine itself, which is also classified by the EPA as a pesticide, and the other available options. Birth control injections make sense for humans but not for wild horses out on almost 33,000,000 million acres of rough, high desert terrain.
The HSUS has a vested interest in perpetuating the use of the PZP vaccine. Further, the HSUS endorsed senators that oppose this study have a vested interest in promoting the Humane Society of the United States’ projects. The PZP vaccine is not humane, not 100% effective, and is expensive and unwieldy to administer. Those that are truly concerned about animal welfare should be supporting solutions that are best for the wild horses who are facing overpopulation induced starvation on the range. Unchecked, the wild horse population will double every 4-5 years. There needs to be a comprehensive and cost conscious plan in place, not a plan that only benefits the owners of a patent.
Animal rights groups work very hard to discredit any mention of spaying wild horse mares. To combat their misinformation, we are sharing information on PZP and a different scientifically sound opinion as well as financial information on both.

Expensive and Requires Yearly Administration
Firstly, the PZP injection must be re-administered yearly and secondly, it’s extremely expensive. That cost raises quickly when you think of that cost multiplied by how many fertile years a mare may have in her life and include the cost of resources and labor involved in administering it annually. Locating and gathering the exact mares due for another dose of PZP alone is an immense challenge for logistics and safety. It is ironic that wild horse aficionados who generally oppose any gathering of wild horses would endorse the PZP vaccine, which requires annual gathering to effectively administer.
According to a 2018 report by Congressional Research Service, PZP costs about $3,000 per mare annually. This cost includes the gathering process, labor, the vaccine, and holding and feeding the animal until it is returned to the wild. Currently, there are over 81,000 horses on the rangelands. When you multiply this number by the number of mares needing to be vaccinated annually to cause real change, it multiplies quickly. For example, if only 20,000 mares are injected with PZP every year, that translates to an annual cost of $60,000,000.
In 2018 fiscal year, the BLM gathered about 11,000 horses from the range which costed approximately $4.2 million each time they gathered, and another $2 million for herd monitoring. Since the standing surgical spay is a one-time procedure and lasts the lifetime of the mare, it offers an opportunity to reduce the number of times horses need to be gathered. That way, the high expense of repeated gathers can be utilized elsewhere, for example developing more programs to help increase adoption numbers.
Additional information about these statistics can be found HERE.

Inhumane Results
The subject of whether or not the proposed methods of population control are humane or not has come up repeatedly. It is important for the public to know that there are serious considerations to make regarding the use of the PZP vaccine. Due to the nature of the vaccine, the way it prevents pregnancy is by not allowing the egg to be fertilized. Keep in mind it does not keep the mare from cycling. This means the mare cycles throughout the year as she normally would, but the pregnancy never “takes”. This means she is bred repeatedly as she continues to cycle. Repeated and ongoing breeding by stallions is detrimental to the mares, as well as the rest of the herd as fighting and general herd upset would continue for months longer than a standard rangeland breeding season.
Additionally, the vaccine only lasts between 8-12 months. This causes some mares to conceive outside the normal spring breeding season, causing foals being born at inopportune times like late fall or even in the winter. Obviously, there are higher mortality rates for those foals than ones born in spring and summer. For these reasons, we believe that the use of PZP is not a humane option.
Why Protect The Harvest Supports The Standing Surgical Spay
Our organization fully supports the BLM’s effort to effectively manage the wild horse herds for several reasons.
Herd Management is Essential to A Healthy Ecosystem
Herd management is essential to maintaining the health of the rangeland. According to the most recent data, there are 81,000 horses on public land, which is over three times the number that the land can support in “a thriving ecological balance” with other mandated multiple uses, which include native wildlife and domestic grazing.

Permanent Solution
The standing surgical spay procedure is permanent. The mares are gathered once, spayed and then turned back out. This will minimize the need to regather herds and spend precious resources on annual birth control that is both costly and ineffective.

Humane Procedure
If you agree with the principle behind spaying dogs and cats to control population numbers, the standing surgical spay is no different, except that it is less invasive than spaying a dog or cat. The standing surgical spay procedure has been proven to be safe and humane. By creating a small incision in the vaginal wall to remove the ovaries, there is less chance of infection because the incision is protected by the body. Some that are not familiar with surgical procedures or veterinary procedures performed on horses are not aware that keeping a mare in a standing sedation is preferred and less dangerous. Standing in a chute for a procedure reduces the complications that can occur when fully anesthetizing a horse and thus laying them down where they can injure themselves when recovering from the effects of anesthesia.
We have proven the standing surgical spay to be safe and effective with our program, the Wild Spayed Filly Futurity. The fillies recuperate quickly and go on to be successful performance horses afterwards.

Economical
The spay procedure itself costs between $250 -$300 per mare. This is a one-time cost, unlike the repeated PZP injections. While it will involve the mares needing to be gathered, that is a onetime cost as well. Compared to the alternative, the spay option reduces the cost drastically over the lifetime of the mare.

Educating Our Legislators and the Public
It is obvious that these 8 legislators have been influenced by the animal rights movement, the HSUS specifically. It is important to remember that senators work for the public, which means the public has a right to voice concern. Contacting your representatives is a key way to educate them on issues you feel strongly about and share your opinion on those matters. We, at Protect The Harvest, work diligently to educate the public on the tactics of animal rights organizations and a wide range of issues involving animal ownership, property rights, and rural lifestyles. We urge our followers to stay informed about the issues and to contact their public officials with any concerns.

Prev Article
Ranching In The West: Setting The Record Straight
Next Article
Big News This Week from Washington D.C.