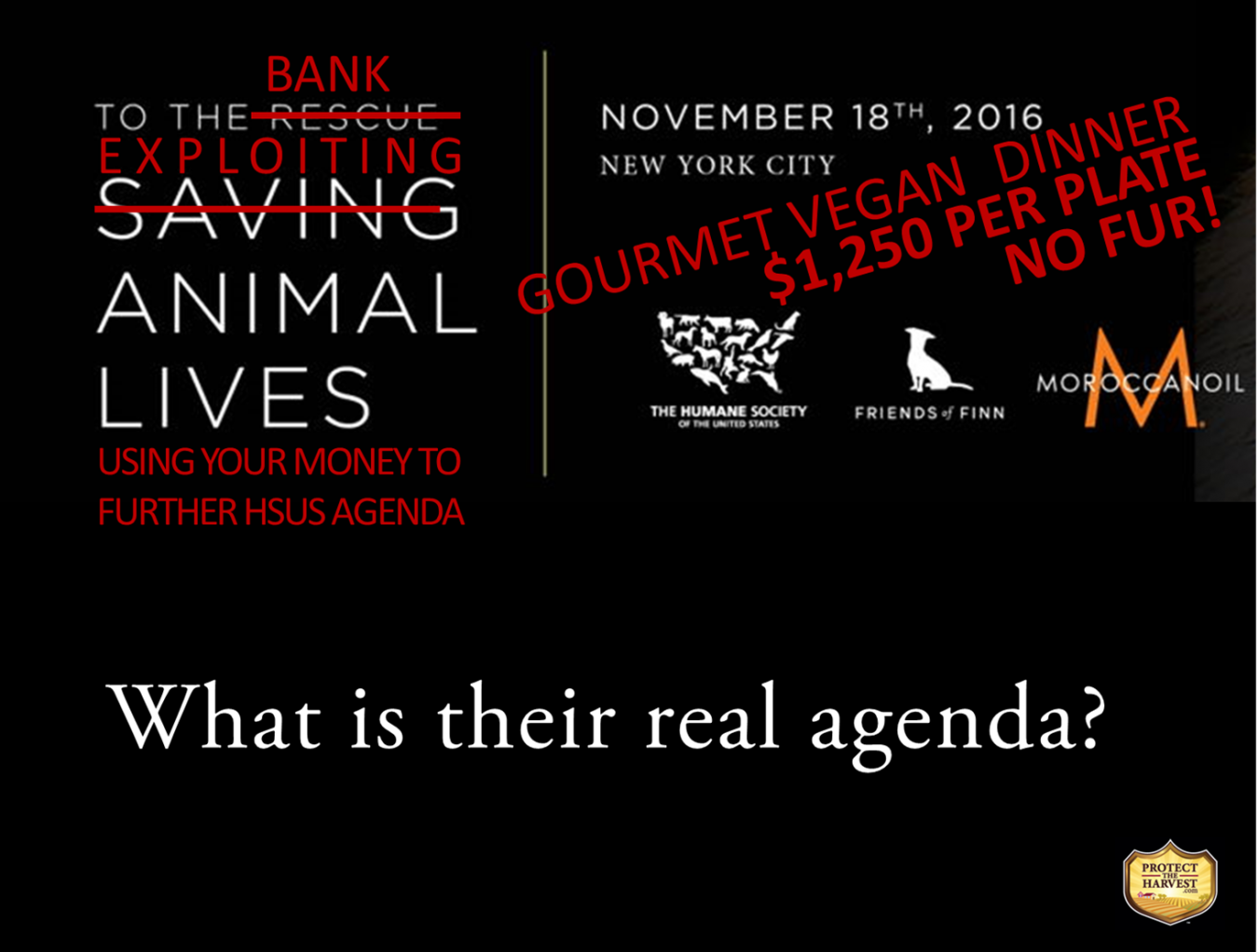 HSUS - TO THE RESCUE - WHAT IS THEIR REAL AGENDA?

Tonight, on November 18th, the HSUS is hosting their signature annual benefit, "To The Rescue". It is a black-tie optional event that has all the ingredients of a PETA type event. As long as you don’t show up wearing fur, you can pay $1,250 for a gourmet vegan dinner. This should not be a surprise since their 2014 IRS Form 990 shows $2,500 in awards to students working with faux fur at The New School (Design and Liberal Arts School) in New York. It gets better, if you read the event webpage, the $1,250 per plate is actually the low-rent deal. They are asking table sponsors to pay up to $50,000.00. Don’t worry if you can’t make it and are wishing you could have experienced what $1,250.00 vegetables taste like, we are sure some of the recipes will show up on their “Plant Based Recipes” posts that frequent their Facebook page.

The entire event is being billed as “To The Rescue”. Over the years the HSUS have duped many caring people into thinking that they have an honest and wonderful platform. According to their 2013 tax return only about 1% of their budget goes to helping animal shelters and rescue organizations (Read here: http://bit.ly/2g2h9qQ). Make no mistake, just because the animal shelter in your area calls itself a "humane society" that does not mean that they are affiliated with the HSUS or receive any support from them.

If you read through their 2014 IRS Form 990, to us, it sounds more like they are pulling on heart-strings in order to put money in their bank accounts and other investments. According to the latest information available on Charity Navigator and the most recent HSUS Form 990 (2014), the Humane Society of the United States has annual revenue of $135,499,050 and total net assets of $213,579,387. Their Form 990 also shows that at the end of 2014, they had $142,305,898 invested in publicly traded securities. Then there is this little detail; they have an Accrued Post-Retirement benefit obligation of $13,826,171 and an Accrued Severance Obligation of $1,415,008. Oh, and let’s not forget about their investments of $55,362,127 that just happen to be located in the Caribbean and Central America (page 41 of their IRS 990 Form – see link below).

In addition to this event, there is an after-party going on as well and they are asking for even more money to attend that one! This is interesting because just down a few streets you’ll find the EQUUS Film Festival. The very film festival where the HSUS donated a mere 0.82% , not even 1% (seems to be a recurring theme of theirs), of the total sponsorship we provided EQUUS. For that tiny sum the HSUS felt they deserved to have a say in who was able to also sponsor the event, and they objected to films that were not in line with theirs. When they couldn’t have their way, they pulled their sponsorship and their films.

What does all this mean? If you look at the numbers and read through their webpage, it is pretty clear.

Here’s a link to their Charity Navigator listing where you can search through several years of their filed IRS Form 990's: (https://www.charitynavigator.org/index.cfm?bay=search.summary&orgid=3848)