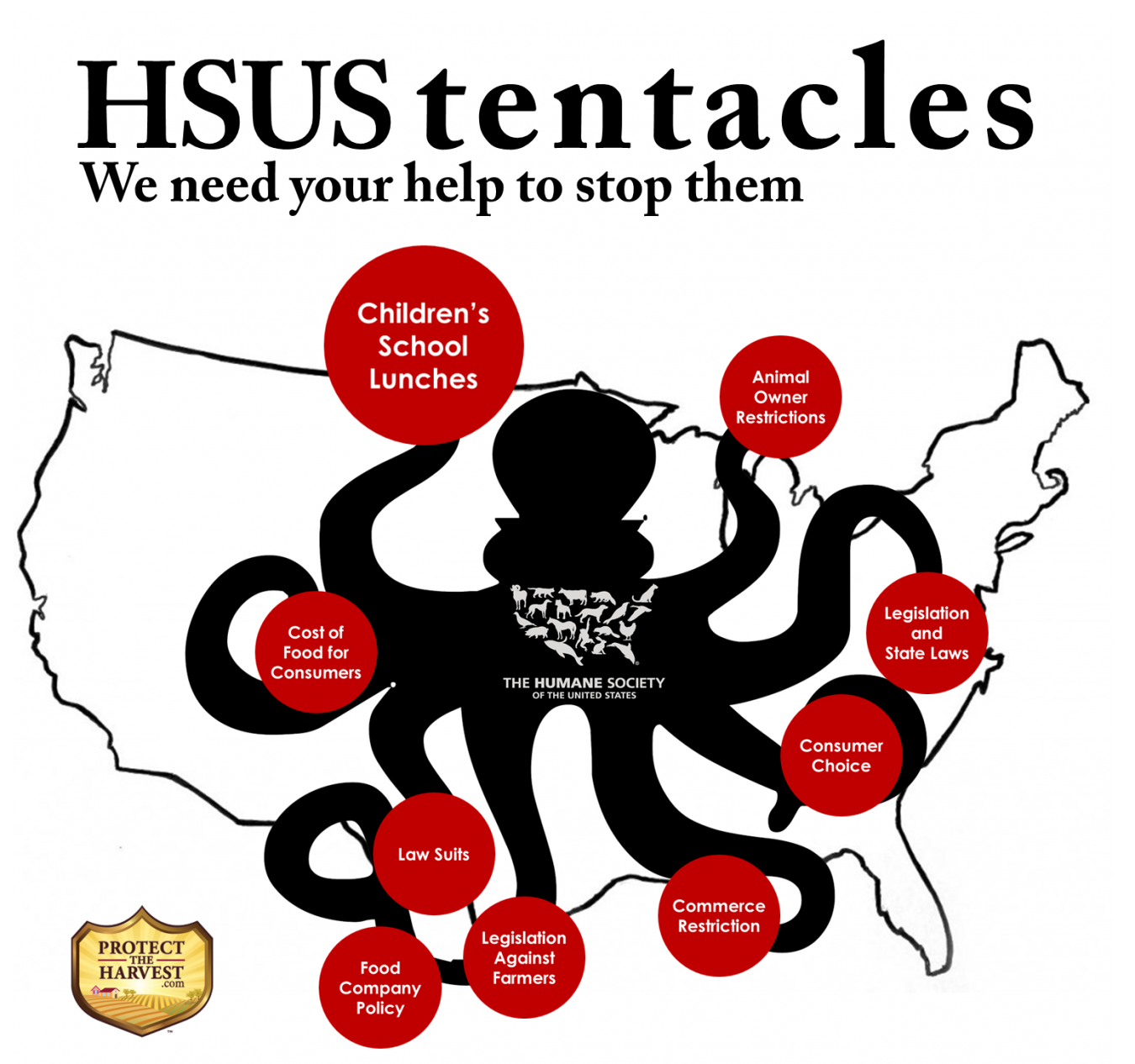 The HSUS tentacles are growing. They are invading everywhere. They are reaching far beyond their claim of "helping shelter animals". While they represent themselves as a non-profit that “rescues animals”, the truth is they are radical animal rights group diverting millions of your donation dollars. Dollars given under the premise of helping animal shelters, are instead going to radical and far-reaching legislation. We need to do more to stop them.

Wayne Pacelle, CEO and President of the Humane Society of the United States in his blog dated December 1st, 2016, talks about how they are influencing legislation. He states efforts have, “…affirmed our right to… make state law…”. The digital news publication Quartz, in its article about the vegan movement published this alarming commentary, “…the core of the pragmatic effort is the Humane Society of the United States, which has managed to consolidate enough political power to leave its fingerprints on public and corporate policy changes across the federal, state, and local levels.”

The HSUS is not going to stop unless we stop them. The same Quartz article gives us some insight into their plans:

“Fast-forward 16 years and that small group of pragmatists have built the movement they imagined.”, and “In the next few months, Shapiro (Paul Shapiro, the Humane Society’s vice president of farm animal welfare) says, the organization intends to hire an outside polling firm to survey cities across the US in order to pinpoint where a similar measure (Question 3 in Massachusetts, that HSUS helped write and fund - it passed) might find success in the next election cycle.” That’s not all of it either. In addition to proposing and funding legislation, they are influencing what America’s children are eating for lunch at our schools. Here’s a direct quote from Pacelle’s blog, “We persuaded 26 school districts, including Atlanta Public Schools, Baltimore City Public Schools, and Hillsborough County Schools in Florida (the eighth largest district in the United States), eight universities, five hospitals, several private schools, and the Head Start agency of the Monterey County school district in California, enact policies to reduce their meat purchases.”

Last time we checked, the HSUS are not experts in child development or nutrition.

We know that many Americans are unaware of what’s going on and that they have no idea the HSUS is not what they represent themselves to be. We are working hard to educate people about their activities and how their dogma is impacting our rights and freedoms. Please help us spread the word. You can get involved by volunteering, sharing our information (blog posts, and social media posts) or by donating.