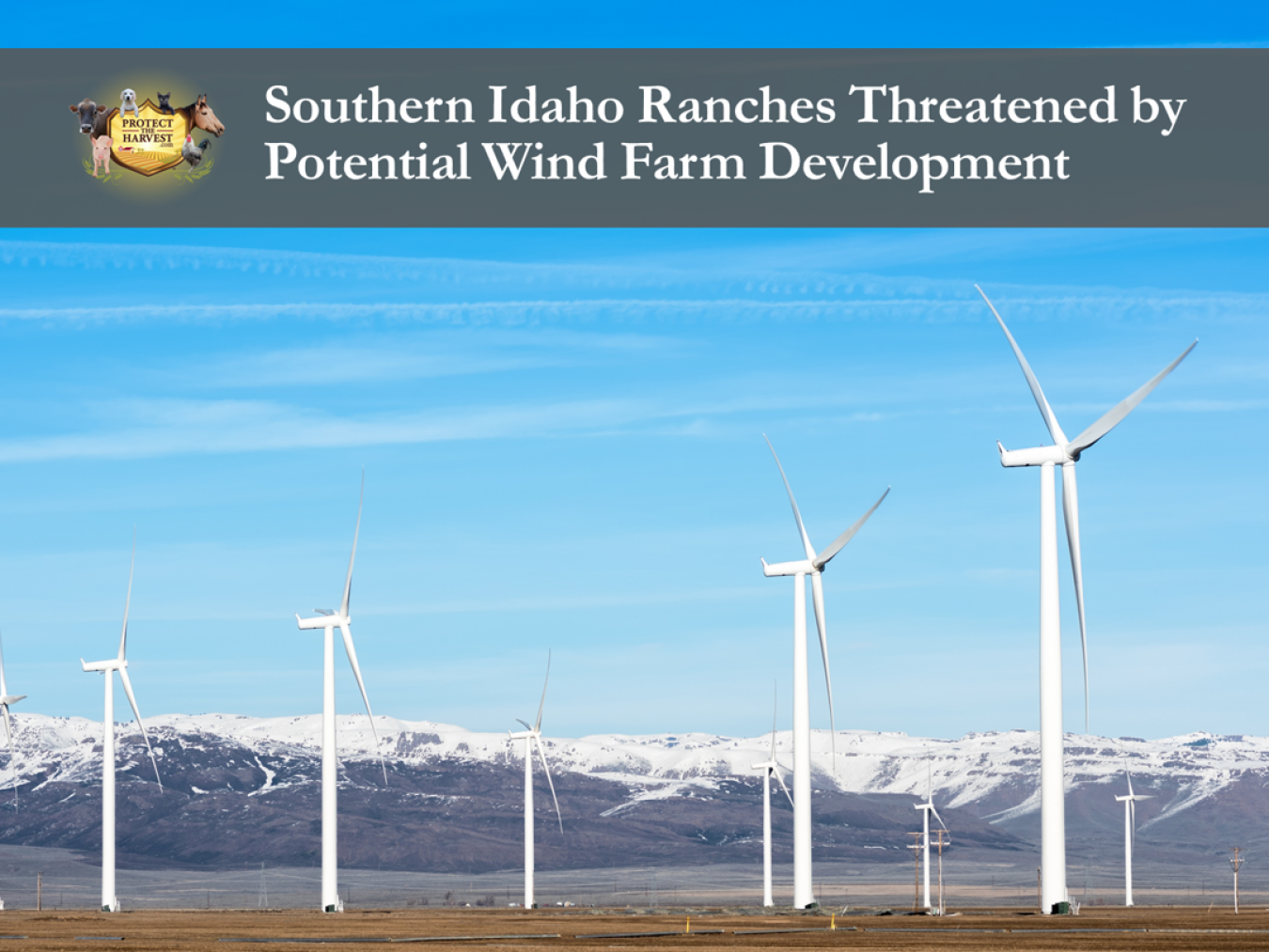 Renewable energy is all the rage in today’s political and investment circles. Aimed toward meeting President Biden’s national goal of net-zero carbon emissions by 2050, the current frenzy of development is a source of great concern for many ranchers in southern Idaho. Massive swaths of land managed by the Bureau of Land Management (BLM) are being targeted to become wind farms. Much of that land includes ranchers’ grazing allotments.
While grazing allotments would be affected by the wind farms themselves, numerous farms, ranches, and rural residences would also be affected by the power lines that would need to be constructed to transmit the energy. The vast majority of the power produced would be transmitted out of state. 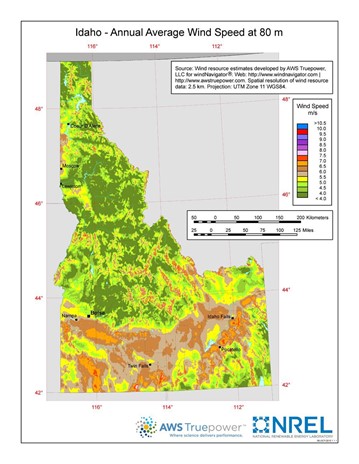 Idaho’s Snake River Plain is already home to over 500 wind turbines, most of which are between Hagerman and Mountain Home, with some south of Burley as well. According to the wind energy industry, the topography and weather patterns of Idaho’s Snake River Plain make it especially well-suited for wind farms. The area is also very favorable to agriculture; the towns and communities of the region have largely been built around farming and ranching.
The green, brown, and dark yellow on the graphic below illustrate the specific areas that are considered to be best for potential wind farm development.

There are a number of new projects currently being considered; some area residents say that the sheer number and scale of projects being proposed is simply overwhelming.
The three biggest projects are named Lava Ridge Wind, Salmon Falls Wind, and Taurus Wind. In differing stages of development, all three are being pursued by a group called Magic Valley Energy (MVE), which is a subsidiary of the behemoth New York private equity group, LS Power. Worth billions of dollars, LS Power was founded in 1990 and has since become one of the largest independent power and energy infrastructure developers in the United States.

The proposed Idaho projects would just amount to more notches in the energy giant’s proverbial belt, but could cause irreparable harm to the area’s ranches and farms, all for the sake of energy that won’t even be used in Idaho. 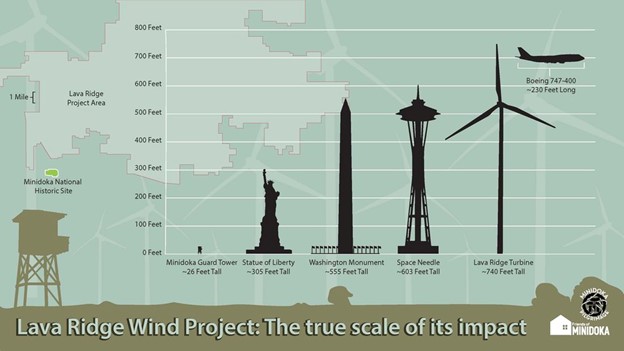 The Lava Ridge Wind Project would entail the installation of 400 wind turbines over 76,000 acres, including 3,000 acres of state land northeast of Twin Falls.
It would be by far the largest wind farm in Idaho, and the largest in the United States. In addition to the large amount of land area involved, the wind turbines themselves would be huge, much bigger than most of the existing turbines in Idaho.
Thus, the vast area that the project would cover, combined with the sheer size of the turbines, would create an indelible eyesore on the landscape. Understandably, there are numerous concerns about the project from environmental, historical, cultural, and recreational standpoints.

The BLM is currently in the process of completing the required environmental impact statement (EIS) for Lava Ridge.
The notice of intent to prepare the EIS states:
Preliminary issues of concern to be analyzed in the EIS include, but are not limited to:

The scoping report portion of the EIS has been concluded, which includes input from the public. Over 1,400 comments were received from a wide range of stakeholders; very few were in favor of the project. The final report is due to be released in August 2022, and a decision on whether or not the project is approved is expected to be announced in early 2023.
There is skepticism surrounding the EIS; some feel that it is merely a formality and that the project’s approval is pretty much a given.

According to Friends of Minidoka, a local historical preservation group, “In August 2021, Interior Secretary Deb Haaland announced the beginning of BLM's fast-track review of the Lava Ridge Project to meet President Biden’s renewable energy permitting goals. As required by the National Environmental Policy Act (NEPA), BLM has completed the scoping process. BLM plans to issue a draft environmental impact statement for public comment in the summer of 2022.”

If you are concerned about the Lava Ridge project, you can get involved by emailing BLM_ID_LavaRidge@blm.gov, or contacting Kasey Prestwich, Project Manager, BLM Shoshone Field Office, 400 West F Street, Shoshone, ID 83352, 208-732-7204, kprestwich@blm.gov.

The Salmon Falls Wind Project was announced in early March 2022 and is in the preliminary stages. It would involve 288 wind turbines over 70,000 acres southwest of Twin Falls. The Taurus Wind project is still in the very early stages but is projected to cover 58,000 acres between Gooding and Shoshone. Both projects will also require an EIS.

Magic Valley Energy project manager, Luke Papez, has expressed that the existing land uses such as grazing and recreation would not be disrupted by MVE projects. However, the BLM grazing rights holders in the area seem to be getting mixed messages.

A concerned citizen reached out to Protect The Harvest and stated that in invitation-only meetings, grazers have been vaguely told that they will be compensated financially for any losses resulting from wind projects during the construction phases, should the projects be approved. Actual dollar amounts and the types of losses that would be covered have not been disclosed.

In general, ranchers feel there are a lot of unknowns regarding the timeline and potential impact of the project. The plan of development created by MVE lists the construction period as approximately two years.
“We’re just kind of here twisting in the wind thinking ‘Well are we going to be off of here for two years or are we going to be disrupted for 10 years?’ We just don’t know,” one rancher was quoted as saying in a local newspaper.

These uncertainties are especially hard to bear considering the skyrocketing costs and volatile markets our nation’s food producers are currently facing.

There are a number of direct losses that ranching operations could incur, but not all of them can be proven and therefore rightfully compensated. Further, the long-term effects are difficult, if not impossible, to quantify. When ranchers are impacted the consequences are far-reaching. The cost of beef available for Americans to purchase at the grocery store could increase, as could the cost of items made with animal by products. Restaurants are a part of this equation as well.

Some examples of issues ranchers could face are:

• Not being able to turn out their usual number of cattle or having their allotted time on the range shortened, resulting in drastically increased costs for feed during an existing hay shortage, or having to sell cattle.
• Disturbance of soil and forage during construction, reducing feed quality and availability.
• Increased travel on newly built roads necessary for construction.
• Stress on livestock, resulting in weight loss, reduced conception rates, and late term abortion.
• Limited ability for fire suppression and predator control.

Ranchers fear that compensation amounts would be arbitrary and wouldn’t come close to alleviating the actual long-term impacts, but that they will be forced into a “take it or leave it” situation in the name of eminent domain.

Wind farming may be the industry du jour, but its true long-term practicality, productivity, and sustainability are yet to be seen.

After the hypothetical wind farm economic booms, after the energy has been funneled out of state, and after the monolithic turbines have been decommissioned and LS Power has moved on to their next conquest, we will still need ranchers and farmers.

Let’s hope and pray that they can weather the windstorm.