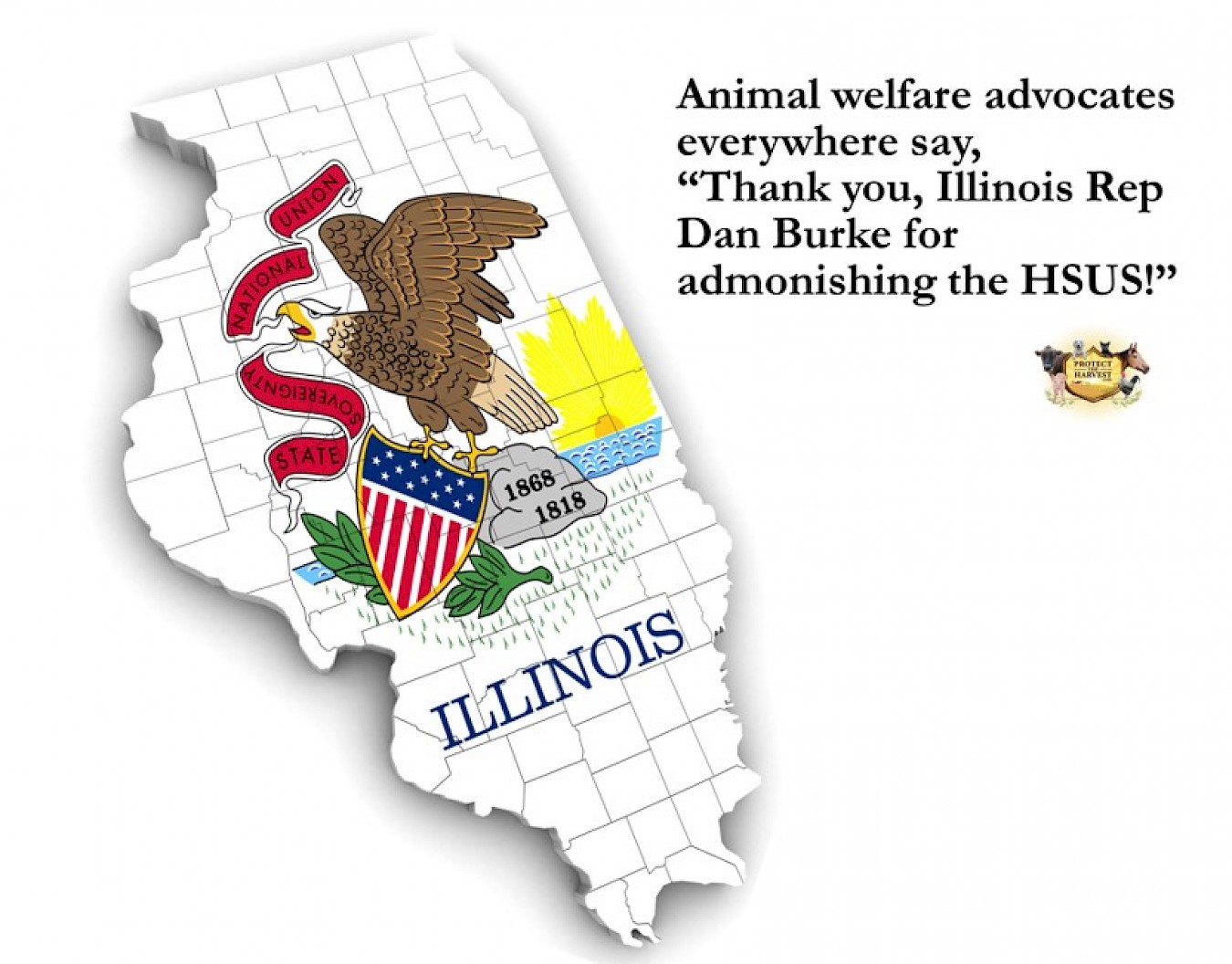 Tuesday, March 6th, 2018, Representative Dan Burke filed HR 0887 in the State of Illinois exposing the tactics and culture of the Humane Society of the United States ( HSUS ). The House Resolution was submitted to the Rules Committee today. We support Representative Burke and hope other Illinois Lawmakers will too.

the Humane Society of the United States

WHEREAS, According to the tax documents of the Humane Society of the United States, as well as other independent analyses, the national organization renowned for animal rights donated less than one percent of their $132 million budget to help care for actual animals in 2016; and WHEREAS, This information differs from the impression people are given by their late-night commercials, which depict animals in distress and in need of help; the end result is that people who want to help innocent animals are baited into donating their money, which in turn is used to help pay for the six-to-seven figure salaries of executives, and the frivolous law suits of local pet stores, zoos, and hardworking farmers; and WHEREAS, These financial revelations about the Humane Society of the United States, along with the allegations of sexual assault against their former CEO, bring into question whether the organization is truly living up to its mission, advocating for the rights of animals; and WHEREAS, Members of this chamber should be encouraging the residents of Illinois to research other local humane societies that are completely unaffiliated with the National organization; residents of Illinois will find that these independent humane societies do not receive many donations and rely primarily on dedicated volunteers to care for the animals; and WHEREAS, Unlike the Humane Society of the United States, local independent humane societies prioritize assisting animals in our own communities, especially those that are abused and neglected, and ending animal abuse; these local organizations are where we, as residents of Illinois, should donate our time and money; therefore, be it RESOLVED, BY THE HOUSE OF REPRESENTATIVES OF THE ONE HUNDREDTH GENERAL ASSEMBLY OF THE STATE OF ILLINOIS, that we admonish the Humane Society of the United States for their disrespectful work culture and lack of commitment to supporting animals; furthermore, we ask anyone who supports animal rights causes to support their local independent humane society instead.

Link to track the bill 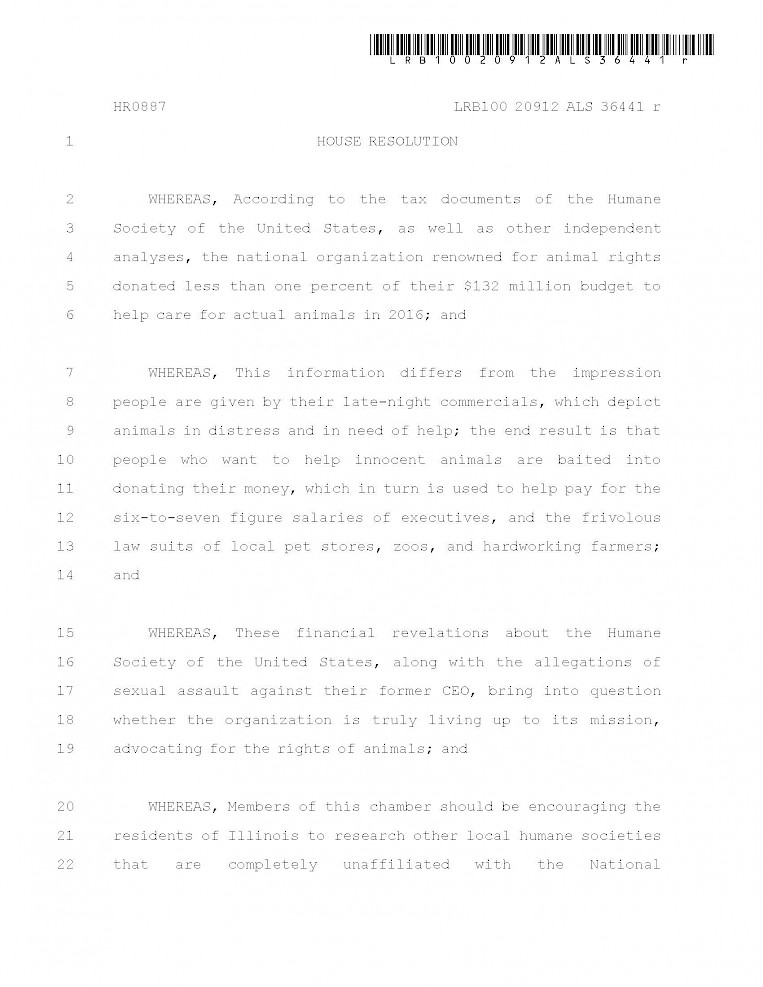 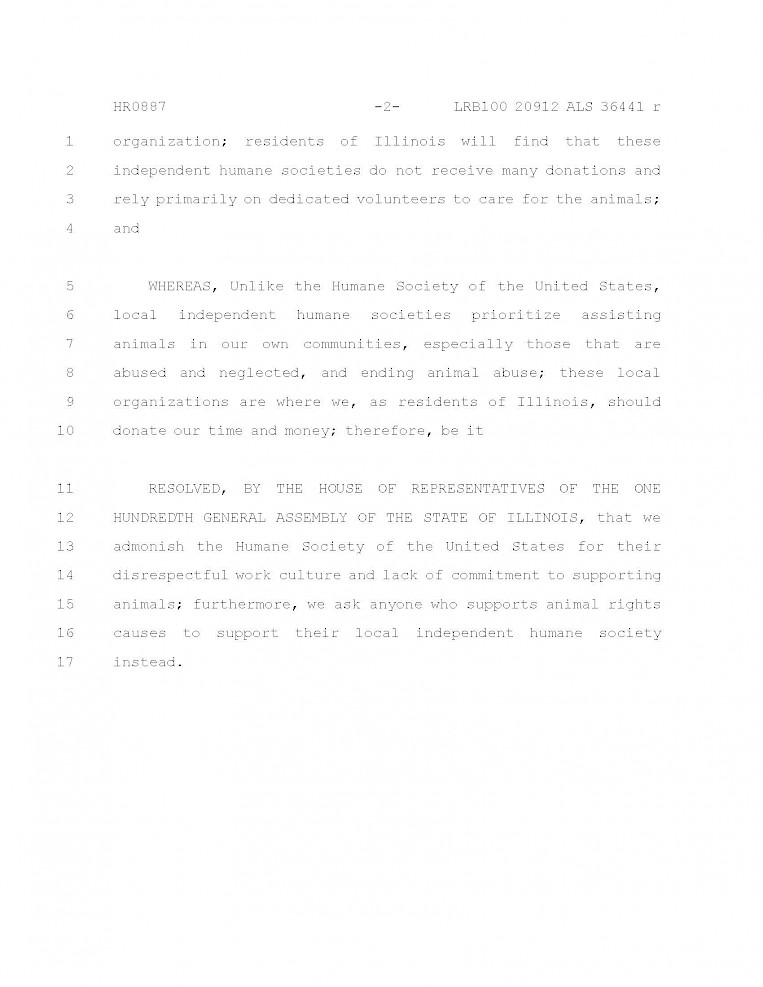