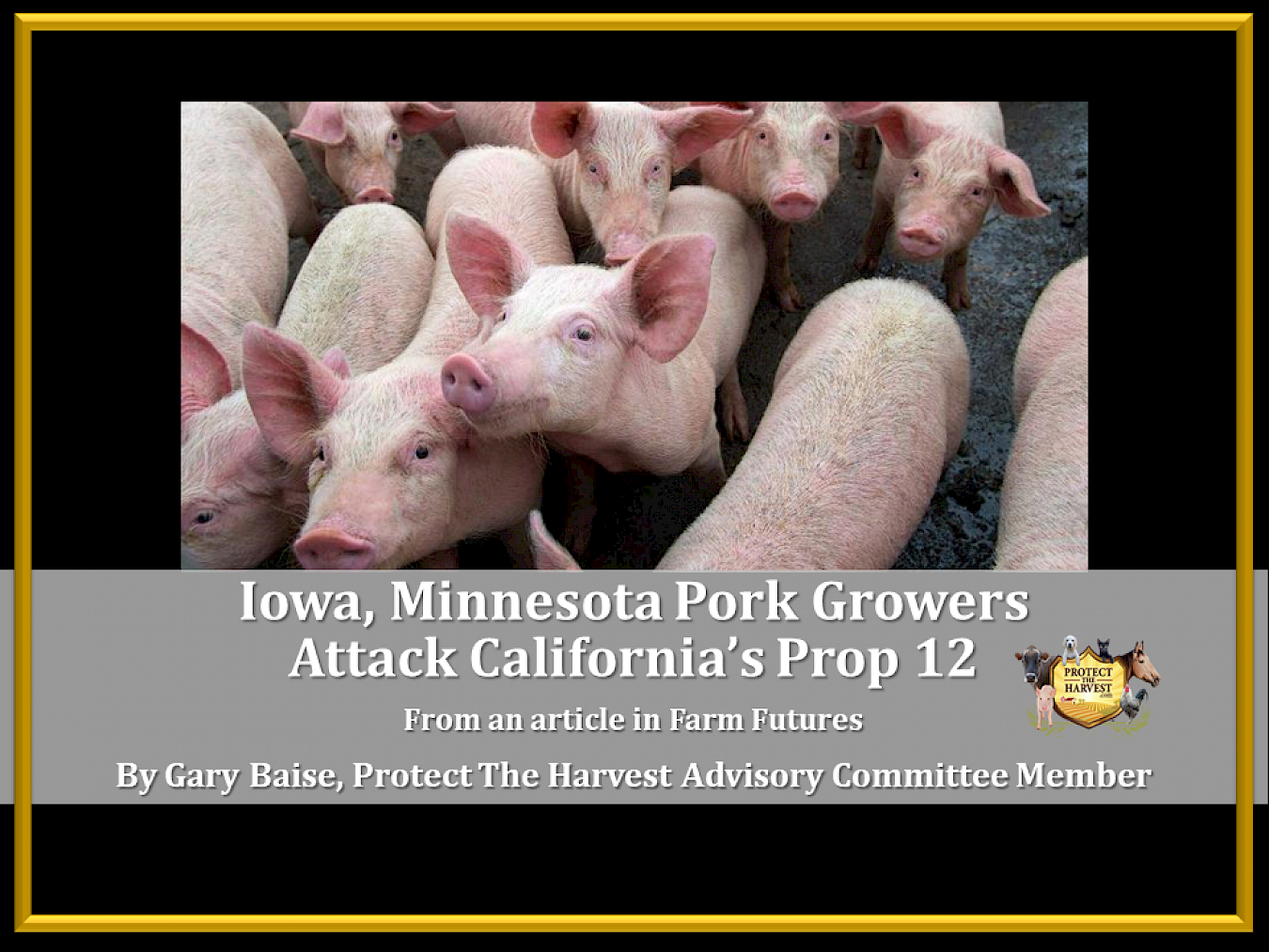 If the U.S. Supreme Court Does Not Intervene, Pork Farmers Could Have California ‘Inspectors’ Knocking at Their Doors.

From an article in Farm Futures by Gary Baise, Protect The Harvest Advisory Committee Member

Iowa is the largest hog producing state in the United States. Minnesota, with 9 million pigs, is the second-largest hog producing state. Therefore, these two states now advise the U.S. Supreme Court on California’s Proposition 12, a rule going into effect Jan. 1, 2022 that bans the sale of pork in California unless the sow from which it was derived was housed with space allowances that almost no U.S. farms satisfy.

Californians account for 13% of the nation’s pork consumption yet import 99.87% of pork consumed.

Proposition 12 will require pork producers located in Iowa, Minnesota and elsewhere to subject themselves to California’s inspectors, who will come to each state to determine that the sows have enough room based on California’s arbitrary standards.

The law has been tested and upheld in lower courts for several years. But in my opinion the lower courts’ decisions’ have been wrong as it relates to the U.S. Constitution’s Commerce Clause:

“…the Commerce Clause protects against inconsistent legislation arising from the projection of one state regulatory regime into the jurisdiction of another State.”

As pointed out in the brief, the Ninth Circuit Court’s decision conflicts with the Fourth, Sixth, and Seventh Circuits. As readers of this blog know, California’s Proposition 12 will place a substantial burden on interstate commerce. The judges and clerks that have looked at this issue are frankly blind when they do not see this substantial burden.

There are important constitutional questions presented by Iowa, Minnesota, and the National Pork Producers. Let us hope the Supreme Court understands not only the constitutional issues but also the practical impact Proposition 12 will have on pork production throughout the United States.

One State Rules All

The first argument in the brief is, “Though Proposition 12, California Projects Its Animal-Rights Regulatory Scheme into Other States and Extensively Regulates Commercial Transactions that Occur Entirely Outside of California.” This statement sums up what Proposition 12 does to pork producers across the country.

During the last 4 years, hog production is mostly created by large operations. The consumer has driven this demand, yet many refuse to accept this reality. And, most hogs in the United States are produced in the Midwest. A major reason for this is because the Midwest states are the largest producers of corn and soybeans, the two primary feedstuffs for hogs.

California’s Proposition 12 regulates production of pork within California and outside of California. Out-of-state pork producers will have to register with California and for distribution purposes the hog producer will have to maintain records “…that are sufficient for purposes of an audit trail.”

California’s regulatory tentacles are already a nightmare for California’s producers; now they will be a burden to pork farmers everywhere. The pork producer himself or herself will have to file an application with the State of California. In addition to these filings, the facility in any Midwestern state will be subject to …annual inspections by an agent of California.”

To add insult to injury the California Department of Food and Agriculture “…may require that additional inspections be performed by an accredited certifying agent [not necessarily the original certifying agent selected by the farmer] or the Department.” You will really like this!

The brief also states: “This could include radical animal rights activists who may become accredited by California as certified agents.”

This brazen scope from California’s Proposition 12 should have been stricken earlier by lower courts. This is an extreme animal rights regulatory program. Let’s hope the U.S. Supreme Court agrees.