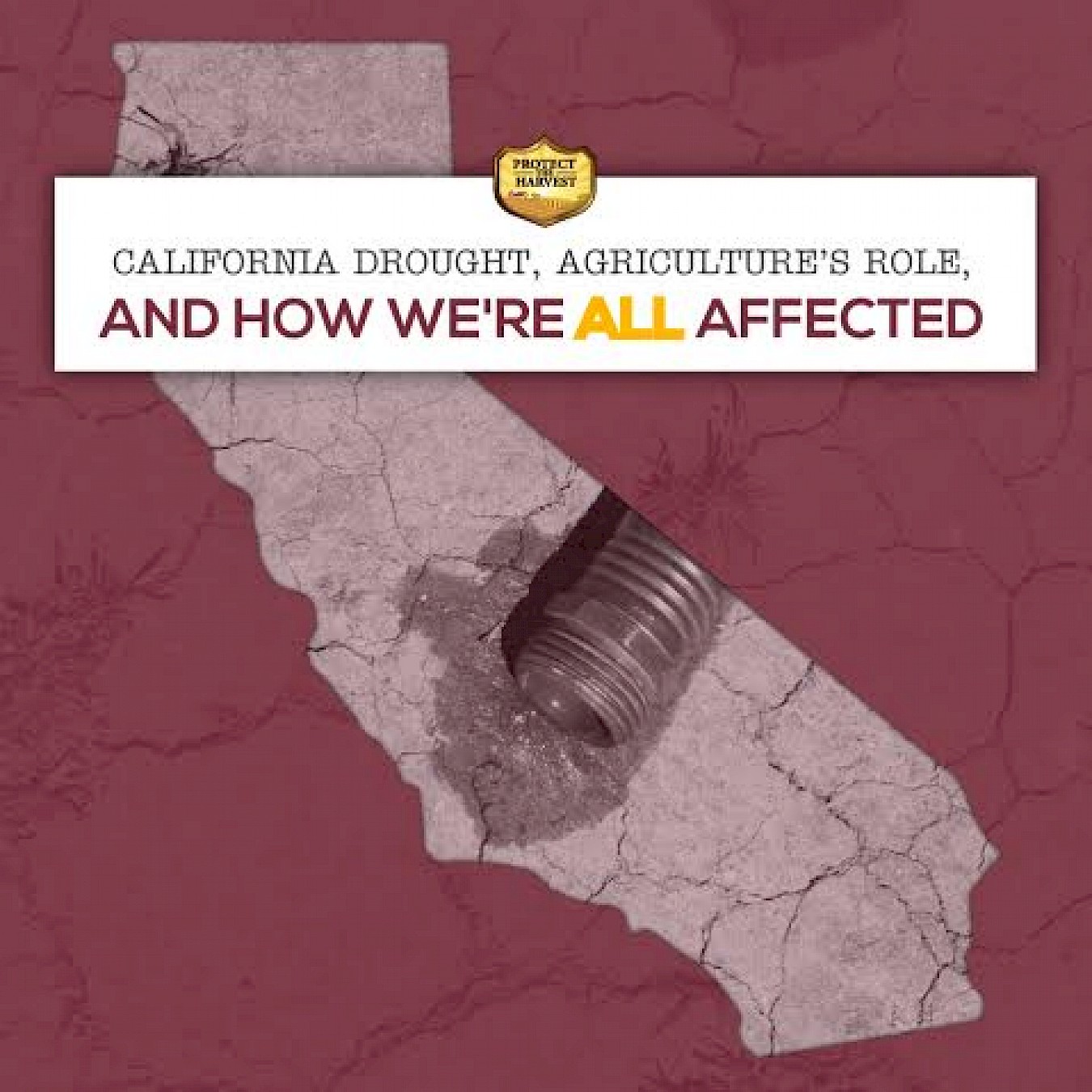 IT NEVER RAINS IN CALIFORNIA: THE GOLDEN STATE'S DROUGHT AND AGRICULTURE'S ROLE

A state clings to hope. Hope that someone, anyone, has a fix for its drought woes. California is currently in its 4th year of drought, the worst in its history, affecting some 37 million residents. This is no small matter. A state this massive in scale, containing a population greater than 160+ countries in the world, has enormous needs. Almost two weeks ago, Governor Jerry Brown announced that, for the first time in the state’s history, California would be under mandatory water restrictions. Cities and towns are being told to cut their water use by 25 percent. The state relies heavily on snowpack to resupply water streams and lakes. The resulting melt from this snowpack provides a critical source of fresh water, especially during the drier months. Unfortunately, the past few years have seen snowpack levels drop to all-time lows due to lack of winter storms and record high temperatures. Reservoirs are incredibly depleted. Jay Famiglietti, NASA’s top water scientist, estimates that California only has one year of water left in them. Blame has been passed around like a hot potato for awhile now. Everybody wants an answer to the problem, but few are offering answers to a solution. Agriculture receives an unhealthy dose of the blame for the water usage. The fact of the matter is, California Agriculture is a major producer for our country and the world. California produces a sizeable portion of our fruits, vegetables, and nuts. Try to imagine your diet without these three items - kind of difficult, isn’t it? This list includes: 99 percent of artichokes, 99 percent of almonds and walnuts, 95 percent of celery, 95 percent of garlic, 89 percent of cauliflower, 71 percent of spinach. It leads the nation in production of strawberries, grapes, asparagus, avocados, carrots, lemons, limes, onions, olives, and the list goes on and on. Add to that its booming dairy industry, and you can see why California’s situation is one that affects us all. Governor Brown, on ABC’s This Week, had this to say about those blaming agriculture for its role in the water shortage:

“Of course we could shut it off if you don’t want to produce any food and import it from some other place. Theoretically, you could do that, but that would displace hundreds of thousands of people…”

California agriculture is so vital to so many sources of food across the country as well as thousands of jobs in the state, yet its opponents want to stifle it in order to save water. The water crisis is one that is complex in nature, and focusing on only one area would be detrimental. Other ideas should be explored as well. The California Farm Bureau Federation President Paul Wenger staunchly defends agriculture, stating that its water supplies have already been cut severely. The low amounts of water California does receive are diverted away from farmland, because of environmentalist complaints involving its effect on a two-inch minnow called the Delta Smelt.     Why California officials would allow their citizens to suffer in order to save a small fish species is a sacrifice that is beyond logic. Jennifer Buckman, General Counsel for Friant Water Authority:

“What we got wasn’t managed very well. . . we got a small pie from Mother Nature, but to take half, or in this instance seven-eighths of that pie and throw it away on a use that doesn’t have good value, that’s a policy choice and it was just a bad one.”

Regardless, water usage is a comprehensive issue that each citizen is tasked with limiting. Most California cities require homes to have water meters installed that track this usage and charge customers accordingly. California officials expect each citizen to cooperate in this regard. Local water agencies can be fined greatly by the state for not complying with efforts to reduce usage. They’ve already reduced the number of days customers can water yards, including a 48 hour ban after measurable rainfall. Outdoor irrigation and pools account for a significant percentage of urban water use, and those numbers are expected to be curbed as well. Conditions are not improving in the near future; in fact, they are set to deteriorate further. California is facing one of its hottest years ever in 2015. “We are only 3 laps into a 12 lap race,” NOAA climatologist Jake Crouch wrote in March. Detractors claim that agriculture consumes far more than it needs to, often citing the statistic that farms use as much water as four times that of cities and towns. The validity of that statistic is in question, especially this year. For instance, Dave Puglia, senior vice president with the Western Growers Association, discussed the plight of farmers in the San Joaquin Valley:

“[They] have been the only ones to have their water actually completely cut off. . . I don’t know how you can ask farmers to conserve more than zero.”

The claim that agriculture uses 80 percent of the state’s water has gained a great deal of attention. That trumped-up statistic excludes water reserved for environmental purposes. That includes: water in rivers protected as 'wild and scenic' under federal and state laws, water required for maintaining habitat within streams, water that supports wetlands within wildlife preserves, and water needed to maintain water quality for agricultural and urban use.   [caption id="attachment_3360" align="aligncenter" width="500"]

Source - State of California[/caption]   Farming in California is almost impossible without irrigation, as the climate simply doesn’t allow for natural growth solely through precipitation. This irrigation is essential: the state’s agricultural industry contributes 2 percent of its $2 trillion economy - a number that seems relatively low until you realize that 2 percent resonates globally in its impact. Farmers, much like many others in the state, are frantically attempting to find any reasonable path to water conservation. The blame they shoulder from environmentalists and other activist groups is unreasonable, and it justifiably frustrates them. Mark Watte, a farmer in Visalia, California, laments this struggle:

"We do what the rest of the world can't do so well," Watte said. "We grow processing tomatoes. Almonds. Pistachios. Table grapes. Garlic and onions. All of these things that we supply a significant amount of the nation and the world's supply. What would they rather have us do with that water?"

This is not to say that farmers are entirely blameless - neither are most California citizens. This problem requires critical thinking that doesn't pass the buck to one particular group or entity. A change is necessary, this much is true. California's future is in the balance, and it will have to rely on the ingenuity of its people to fix this crisis.
Prev Article
Protect The Harvest Joins the Fight for Oklahoma's Right to Farm
Next Article
Right to Farm Passes in Oklahoma Senate Committee; Now Goes to Full Senate