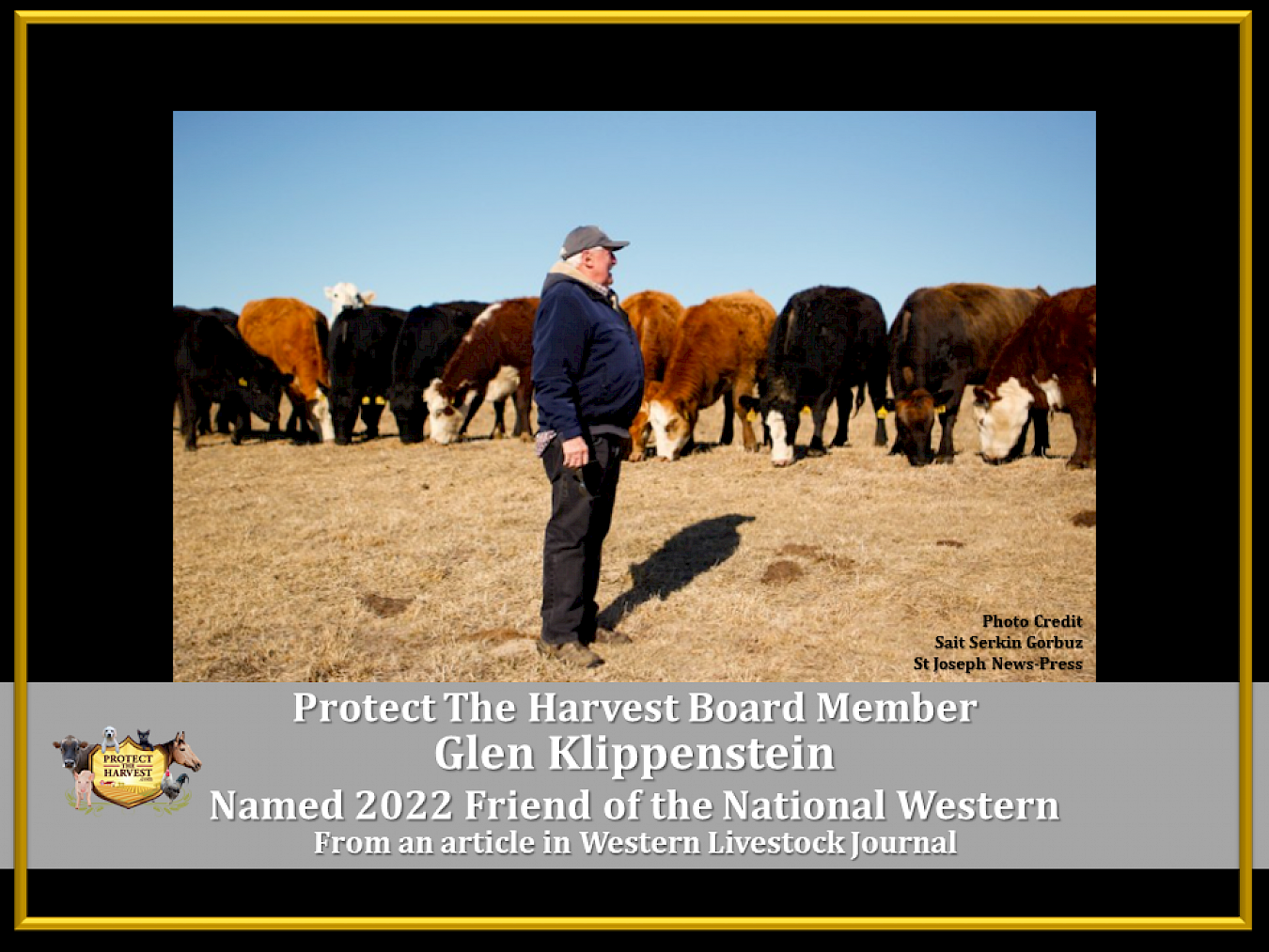 From an article in Western Livestock Journal 12/23/21

The National Western Stock Show (NWSS) is proud to announce industry icon Glen Klippenstein will be honored as the 2022 Friend of the National Western. Glen has been a constant at NWSS for over 50 years as an exhibitor, judge, intercollegiate contest official, breed executive and enthusiastic spectator. For Glen, NWSS is about friends, commerce and building a bridge to consumers.

He estimates through his attendance at NWSS, service to the National Cattlemen’s Beef Association (NCBA) and leadership on the Cattlemen’s Beef Board—all three of which are located in the Denver metroplex—he has spent about two years of his life in the Mile High City. For him, Denver is where the business of the cattle industry gets done!

The NWSS has been the launching pad for many domestic and international sales for Glen. In one year alone at the NWSS, Glen sold a $100,000 bull and tallied a total of $400,000 in cattle and semen sales. A NWSS accomplishment that may never be equaled occurred from 1971 to 1984, when Glenkirk Farms had the Grand and/or Reserve Champion Polled Hereford bull 12 times. In addition to his exploits at NWSS, other show ring accomplishments include 19 National Polled Hereford Grand and Reserve Champions and show ring wins in 39 states and Canada.

Glen was born on May 29, 1937, in Saskatchewan, Canada, on a diversified crop and livestock farm. However, his father valued an excellent education for his family, so in 1948, the family moved to Pennsylvania to have access to better schools. Once in Pennsylvania, Glen obtained U.S. citizenship with patriotism equaled by few.

He also excelled academically and in school activities during his secondary education, serving as president or captain of various clubs and teams, as well as president and valedictorian of his class. As the “farm kid” in his class, Glen started at an early age a lifelong passion for teaching and promoting agriculture and food production “to anyone who would listen,” a trait that anyone who sits beside him at an airport knows he continues with vigor to this day.

He continued to excel while an undergraduate at Pennsylvania State University, where he won practically every honor that could be bestowed on an ag student. What he valued most was the mentorship of professor Herman Purdy. It was through Purdy—who served as adviser to then-President Dwight D. Eisenhower and his Angus herd at Gettysburg Farm—that Klippenstein was able to visit Eisenhower and sit in on a multi-hour conversation between Purdy and Eisenhower, which Glen found “life-changing.”

Upon graduation, Glen had his choice of jobs, including managing Eisenhower’s farm, but his entrepreneurial spirit led him to strike out on his own. After several years farming in Pennsylvania, he made the strategic decision to move the operation to Missouri, where he would run a cow herd for the next 55 years. During his 28 years at Glenkirk Farms alone, Glen marketed over 14,000 bulls and females for a value of $42 million.

Glen quantifies whatever he can, including how best to advance his herd and the beef industry. With over 4 million ground miles traveled, he has positively impacted countless fellow breeders, executives, educators, students and consumers along the way. He was the one who convinced Walmart and Sam’s Club Owner Sam Walton to carry perishable products—the first necessary step to selling beef—as well as persuaded McDonald’s to spend millions promoting beef.

He was a Missouri state senator, prolific speaker and cattle judge with sales to most states and 22 other countries. He is credited with being one of several to lead the charge to a more profitable and respected cattle industry that joined the hands of cattle producers and consumers.

This energetic and enthusiastic mentor to many was chairman of a breed association, CEO of another, chairman of the National Beef Promotion and Research Board twice, chairman of the NCBA Membership Committee and vice chairman of the now $20 billion Federal Ag Mortgage Corporation, nominated by former President George W. Bush. Through it all, he always thought of Denver as his home base for promoting cattle and his herd of several breeds to best utilize the advantages of heterosis while educating consumers on the subjects of beef and ranching.

Glen’s positive impact has also gone far beyond U.S. shores. He has made multiple trips to Australia, South Africa, Argentina, Canada, Brazil, Zimbabwe, Uruguay, Guatemala, Mexico and New Zealand to promote U.S. cattle genetics, serve as a popular overseas speaker and judge numerous shows. His record in the five most populous Hereford countries—U.S., Canada, Australia, South Africa and Argentina—is unparalleled. He has judged the national shows in each of these countries, and in 1990, Glenkirk-sired cattle won Grand and/or Reserve National Champions in five countries.

Universally, Glen has been recognized as a tireless industry servant. He has traveled countless miles all over North America and the rest of the world in order to give a stellar speech or judge a show. It didn’t matter whether the event was large or small; he gave it his all. Such was his commitment to agriculture and the beef industry that he did this largely as an unpaid volunteer. He was always selfless in terms of putting the industry ahead of even his own business and the opportunity to sleep in his own bed. Glen estimates that during the peak of his career, he typically spent 200 nights away from home annually. He has had over 1,000 speaking engagements and judged over 400 shows within the U.S. and internationally.

Glen’s energy is infectious, his selflessness for the betterment of the industry is legendary, and his devotion to faith, family and country are unsurpassed. Most of all, his wife Linda and four children are his love and support team. NWSS is proud to recognize Glen Klippenstein as its 2022 Friend of the National Western.