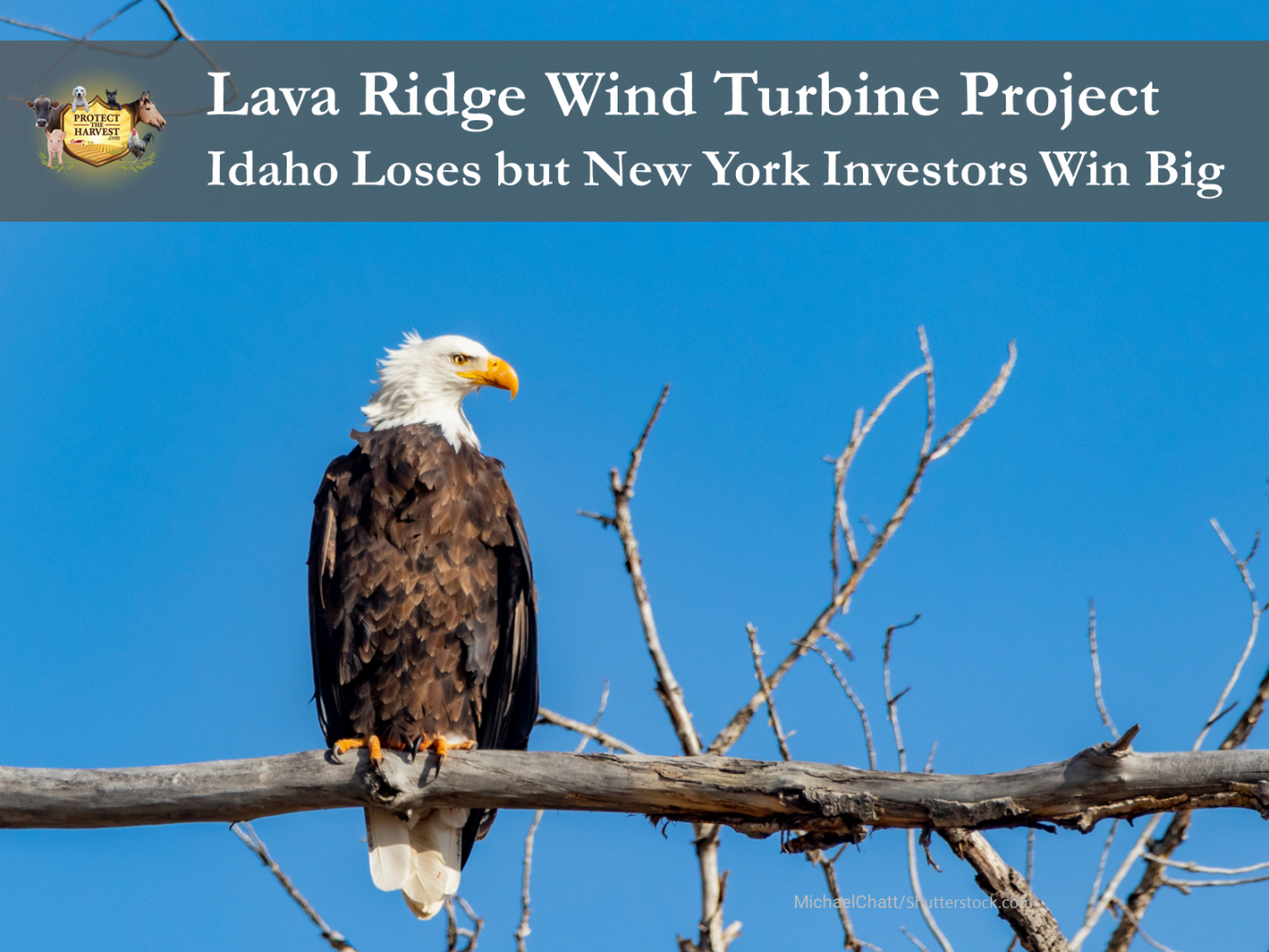 An Update on Lava Ridge: Who Wins, Who Loses

Submitted to Protect The Harvest by John Arkoosh

The Lava Ridge wind project has stirred up some controversy over the last couple of years here in Idaho. The plan is to install 400 wind turbines that are 740 feet tall over an area of 76,000 acres of public land here in southern Idaho. For reference, these turbines will be the height of a 74-story building or 130 feet taller than the space needle in Seattle, Washington. These will be more than twice as tall as any existing Idaho wind turbines. The plan of development calls for over 380 miles of new access roads, 280 miles of new power lines, and many more miles of underground power lines.

The big winner will be LS Power headquartered in New York City on the 35th floor of an office building on Broadway Avenue. Luke Papez, a spokesman for LS Power, stated the plan is to produce 1200 megawatts of power. He further said that LS Power will receive dollar-for-dollar production tax credits, per kilowatt hour, on all the production for the first ten years of operation.

These statements were made this summer before the Inflation Reduction Act sweetened the pot with even more taxpayer money. Now they may opt to receive investment tax credits for up to fifty percent of the construction costs. All of these tax credits are transferable and can be sold to the highest bidder. LS Power has stated in its information that renewable energy will be Idaho’s next great export.

California will be able to purchase “renewable green energy” without the mess, eyesore, and environmental destruction in its own backyard. This power generated in Idaho will be sold to California via the planned N-SWIP line (another LS Power Project) coming up from Southern California through Las Vegas to the midpoint substation south of Shoshone, Idaho. This will all be done on federal and state public lands in Idaho, so there will be no royalty fees for private landowners for wind turbine placements.

LS Power’s promotional ads pretend that Idaho Power may need its power and that it may stay in Idaho. The fact is they are a private company free to sell wherever they can get the best price. If Idaho buys their power, your bill is going up because they will have to outbid California and Las Vegas.

The last winner, if you can call them one, would be the federal government which will receive around $15 million a year in right-of-way fees for the project. However, that $15 million pales miserably in the face of the hundreds of millions of dollars they will pay out in dollar-for-dollar tax credits.

The state of Idaho will receive around $4 million per year in taxes according to LS Power. Now, $4 million is nothing to sneeze at if you’re a small business owner, but to the state of Idaho, it is a pittance compared to the enormity of this project and the permanent scar it will leave on our landscape and economy.

Jerome, Lincoln, and Minidoka counties are being told they will benefit from some construction jobs for a couple of years, but those jobs are slated to be filled by California union workers per the current administration’s Build Back Better program. After construction, they will have only twenty permanent jobs from this project.

They will also have county roads pummeled to gravel from the 2200 vehicles per day that LS Power says will traverse the site during the construction phase. Many of those vehicles will be extremely heavy overweight vehicles carrying construction equipment and power production equipment. These counties will receive very little tax benefit locally because the entire project is situated on public lands. If they were built on private land as they should be, state and local government could assess the proper tax and have meaningful oversight in the permitting. Your school districts, highway districts, etc. will suffer the consequences.

What Will the Farmers and Ranchers Lose?

The Star Lake Grazing Association has developed water and seedings which currently support one of the best grazing allotments in southern Idaho. These improvements include over 100 miles of pipelines and 45 water troughs. These ranchers are very concerned about their livelihoods. Those water systems will be damaged or destroyed by construction activities and heavy equipment. This could render the allotment useless, or at least severely disrupt grazing during the construction and rehab phase.

Two additional windmill projects planned for the immediate area of roughly the same size mean there will be no alternate feed source for these ranchers. At present, there are 11 wind, solar, or battery storage projects proposed for the lands administered by the Shoshone field office.

The Lava Ridge project alone will affect 42 different ranching operations involving 62,000 AUM’s according to comments from the BLM during the resource advisory committee tour of the project on June 15, 2022. If these family operators are pushed out during construction, many won’t make it back as they will likely be replaced by large corporate interests.

What Will the Land Lose?

Farmers and ranchers in the area have been stewards of the land for over 100 years taking care to preserve and protect the resource. Many have formed and are members of an RFPA and fight wildfires alongside local and federal firefighting agencies. They have adapted their water resources and offered their personal equipment to these efforts.

A key piece of the firefighting arsenal on these lands is the aerial attack on wildfires. This resource will likely be missing from this area in the future, leaving us to wonder how will we stop the fires post-construction. LS Power says not to worry, our network of 380 miles of roads will stop the fires.

A lightning-sparked fire on a hot summer afternoon with 40-mile-an-hour winds can jump any road in the state of Idaho. That is what happened on a hot July day in 2007. The Red Bridge fire was sparked by lightning in the northeastern toe of the Jerome Butte. This fire ran northeast in the first couple of hours jumping the Gooding Milner canal in several places and burned to the top of Wilson Butte before changing directions and running northwest. A few hours later it had burned everything from Wilson Butte back to Highway 93 and 24. It crossed both highways and burned down a barn at the Lincoln county fairgrounds on the outskirts of Shoshone. These fires can be devastating and a key piece of fighting them is a safe and effective aerial attack.

What Heritage Will the People Lose?

The Red Bridge Fire burned 45,000 acres in less than 24 hours. Part of the rehab plan was an archaeological study of the burned area. Workers formed a human chain and walked all 45,000 acres of the burn. This study discovered, cataloged, and replaced hundreds of ancient artifacts from previous inhabitants.

The Native American community has grave concerns about the destruction of their cultural heritage and archaeological sites as well as the loss of hunting opportunities. These sites have produced some of the oldest Native American artifacts on the continent.

The Japanese American community has strong ties to the area through the Minidoka internment camp which was operated during World War II incarcerating thousands of innocent Japanese Americans. Descendants and even former inhabitants come here often to reflect on what took place in the Idaho desert 80 years ago. The internment camp is now a National Monument, and The Friends of Minidoka are dedicated to preserving the landscape as it was then. Many of these brave Americans fought and died for our country while their families were incarcerated in the Idaho desert and other camps around the United States.

What Will the Animals Lose?

The project site is home to many species of big game deer, elk, and antelope, which live within the boundaries of the project. This area is an important migration corridor and winter range for big game. The Lava Ridge project will no doubt have negative impacts on these animals and in turn, will adversely affect sportsmen who contribute a lot of economic benefits to our local businesses.

Mark Doerr, former Idaho Fish and Game Commissioner stated that the project area hosts 400 different species of migrating and resident birds every year as well as eagles, hawks, owls, and many species of bats. They won’t fair well with many being directly slaughtered by the turbine blades.

Public Lands No Longer for the Public?

Off-road enthusiasts enjoy the many trails and unique landscapes and caves of this area. Will the same opportunities remain after this project is installed?

There are many more of these destructive projects on the horizon. Currently, there are two more wind projects proposed for the area. These projects will be nearly the same size as the Lava Ridge project. The Salmon Falls project is proposed south of Twin Falls between Castleford and Rogerson on public land. The Taurus project will be situated between Shoshone, Jerome, Wendell, and Gooding and even east of Shoshone nearly to Dietrich— all of which are on public land. Two solar projects are proposed south of Dietrich, and northeast of Jerome covering 11,000 acres of public land. There is no question that these solar projects will be single land-use with no other multiple-use opportunities available.

The list of losers is long. The point is these public lands are meant to be multiple use and although LS Power claims the multiple-use opportunities will still be available, no one knows to what extent or if it all. We are not averse to LS Power making money. We are not averse to them collecting hundreds of millions of dollars in taxpayer-funded renewable energy subsidies. The problem is that placing the project on public lands is going a bit too far on the backs of American taxpayers and especially on the backs of Idaho citizens.

The citizens of Southern Idaho need to weigh the benefits and the costs of these projects and make an informed decision. Decide what you want to see and hear when you look up from the toils of your day, or when you are out walking your dog, or are trying to enjoy a horseback ride in the desert. Do you want to look out at a clear starlit nighttime sky or a sea of red flashing lights?

Right now, the federal government is trying to impose its will on the people of Idaho. We feel the cost will be high to our economy, our resources, and our way of life. It seems the green of this green energy deal is more about the green going into the pockets of large, out-of-state corporations than it is protecting our resources here in Idaho.