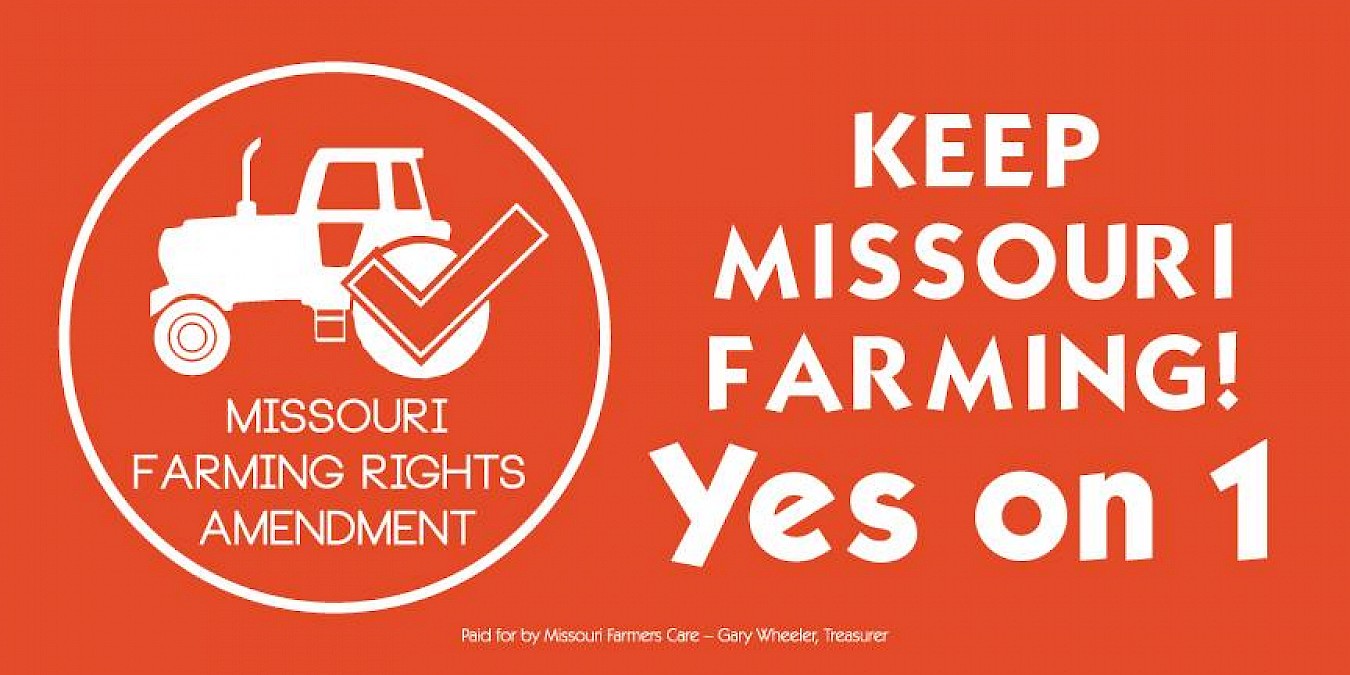 MISSOURI FARMING RIGHTS AMENDMENT - EVERYTHING YOU NEED TO KNOW

Amendment 1, also known as the Missouri Farming Rights Amendment, received strong bipartisan support by members of both the House and the Senate in 2013, leading to its inclusion on the 2014 ballot.

If approved by voters, the language would be added to Missouri’s constitution as such:

“That agriculture which provides food, energy, health benefits, and security is the foundation and stabilizing force of Missouri's economy. To protect this vital sector of Missouri's economy, the right of farmers and ranchers to engage in farming and ranching practices shall be forever guaranteed in this state, subject to duly authorized powers, if any, conferred by article VI of the Constitution of Missouri.”

The Missouri Farming Rights Amendment will create lasting legal safeguards for American farmers and ranchers. If adopted, it will ensure the personal rights and freedoms for every farmer, both big and small.

Amendment 1 will also protect the American consumer. Consumers need to know that their food supply will remain stable, healthy, safe, and affordable.

Why is it needed?

Amendment 1 is a proactive legal safeguard for ALL farmers and ranchers that will protect all of Missouri’s farm families from attacks made by out-of-state interest groups and unelected bureaucrats.

North Dakota became the first state to adopt a constitutional Right to Farm amendment in 2012, which voters passed overwhelmingly, 67% to 33%.

Several other states are considering similar legislation, including Indiana and Oklahoma.

When will the vote occur?

Voting will occur on the August 5th primary ballot.

False. - 97% of Missouri farms are family owned and operated. Amendment 1 extends protections to ALL farmers, including small and organic farms.

Myth #2: Amendment 1 is just a waste of time - it doesn’t actually accomplish anything.

False. - State constitutions are constructed entirely different than the Federal Constitution. States have been given the power and authority to create laws that are not covered in the federal constitution.

Myth #3: Why does farming get special treatment? Why shouldn’t other professions be given constitutional protections?

False. - Farming and ranching is less of a profession and more of a way of life. Amendment 1 is ultimately about protecting our food supply. Few other professions are actually in danger. The Missouri Farming Rights Amendment is in the best interest of protecting our economy from groups who are solely attacking one industry - agriculture. Besides, don’t journalists have constitutional protections? (i.e. the 1st Amendment)

We ask that if you are a Missouri resident, please register to vote and be there on August 5th to help Missouri’s farmers protect their rights, maintain the quality, affordable food supply that Missouri already enjoys, and help protect Missouri’s future!