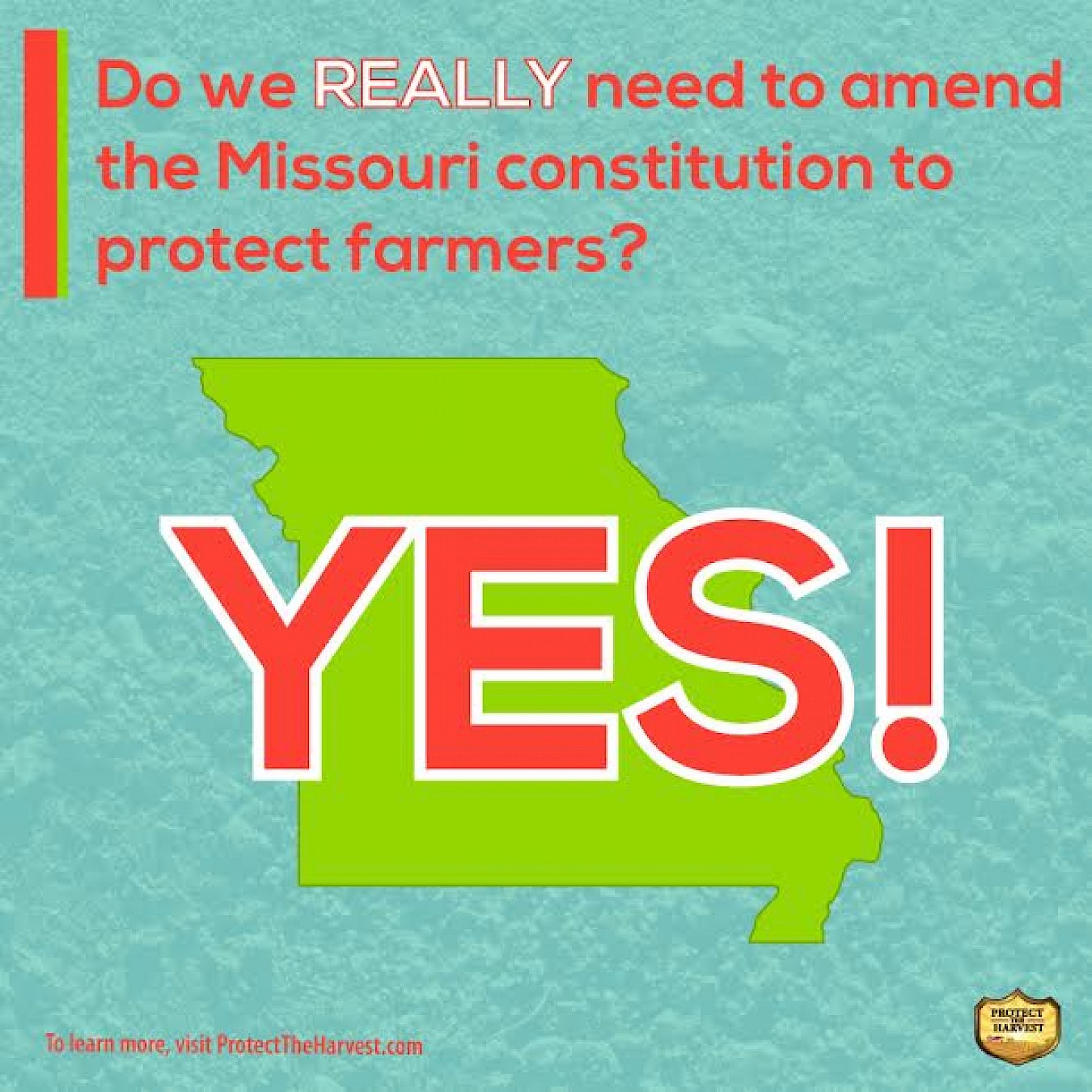 DOES MISSOURI REALLY NEED TO AMEND ITS CONSTITUTION TO PROTECT FARMING?

On August 5th, Missouri voters will decide whether to adopt Amendment 1, also known as the Missouri Farming Rights Amendment, which will protect the state’s family farms and ranches.

But is this really necessary? Does the state actually have to go so far as to amend their constitution to protect what the overwhelming majority of people see as a natural, God-given right?

The answer is a resounding: YES!

The Missouri Farming Rights Amendment (AKA Amendment 1) will add a new section to Article 1 of the Missouri Constitution which will read as follows:

“That agriculture which provides food, energy, health benefits, and security is the foundation and stabilizing force of Missouri’s economy. To protect this vital sector or Missouri’s economy, the right of farmers and ranchers to engage in farming and ranching practices shall be forever guaranteed in this state, subject to duly authorized powers, if any, conferred by article VI of the Constitution of Missouri.”

On Election Day, voters will see the following summary on their ballots (this is the question they will actually be answering Yes or NO to):

“Shall the Missouri Constitution be amended to ensure that the right of Missouri citizens to engage in agricultural production and ranching practices shall not be infringed?”

It can’t be any more straightforward than that. Amendment 1 clearly protects the right of Missourians to farm and ranch.

But why is this needed now? There are three reasons.

Reason 1: Agriculture Is Vital To Missouri

The overwhelming majority (over 97% in fact) of Missouri’s farms are family owned and operated. Those farm families support over 300,000 jobs in the Show-Me State.

On top of that, Missouri farmers and ranchers continue to provide some of the world’s safest, most affordable and abundant sources of food to consumers, while using fewer resources, less land, less water and less energy.

Estimates show that by 2050, agriculture will be required to increase its productive capability no less than 70 percent to feed the growing world population and avoid widespread famine.

By protecting farmers and ranchers, Missouri will preserve its most important economic sector, while ensuring that our families have access to the fresh, nutritious foods they need...at prices they can actually afford.

Reason 2: Agriculture Is Under Attack

Not only do these men and women face the daily challenges that farm life brings, but oddly they find themselves in constant defense against enemies that want to change their way of life and put many of them out of business.

Animal rights and environmental extremists have systematically targeted Missouri’s farming community in an effort to bury them under a mountain of ridiculous, misguided and crippling red-tape.

The current administration in Washington has been all too willing to help. The EPA tried to pass a rule which would have banned dust on farms. The National Labor Relations Board tried to make it illegal for kids to help out on the family farm. Activists in Congress even tried to hijack the farm bill and add in dangerous, hidden restrictions that would have decimated animal agriculture.

Our rights don’t come from government. They are God-given freedoms that come with our humanity. However, bureaucrats and activist judges have made it clear that they will not respect those rights unless they are codified in statutes or constitutions.

This is why the US Bill of Rights was an essential element of the Constitution. Without it, our rights to free speech, assembly, free religious expression and even our right to bear arms would be trampled on by an over-zealous government. Those are all God-given rights too, but they only receive the highest level of protection because they are written down in a way that the courts cannot ignore.

It’s hard to believe that in today’s day and age we have a need to reaffirm the rights and freedoms of Missouri agriculture producers and property owners. Due to the extreme lengths activist groups and their partners in government go to in order to restrict and control Missouri’s food-providing community, it’s necessary to amend the state constitution to add clarification and protection for Missouri farm families.

Missouri’s Constitution was originally adopted in 1821 and has been through four revisions, with the latest version having been adopted in 1945. Since then, Missouri’s constitution has been amended 34 times to reinforce traditional conservative values and limited use of government.

The broad scope of Amendment 1 is intended to provide the highest level of legal protections for the future generations of family farmers in Missouri.

Amendment 1 is a vital, essential step in the fight to protect the Missouri farm families who grow our economy, steward our land and resources and provide our families access to fresh, nutritious food, for generations to come.

For more in-depth information on the impact of the Missouri Farming Rights Amendment, we encourage you to visit Missouri Farmers Care.