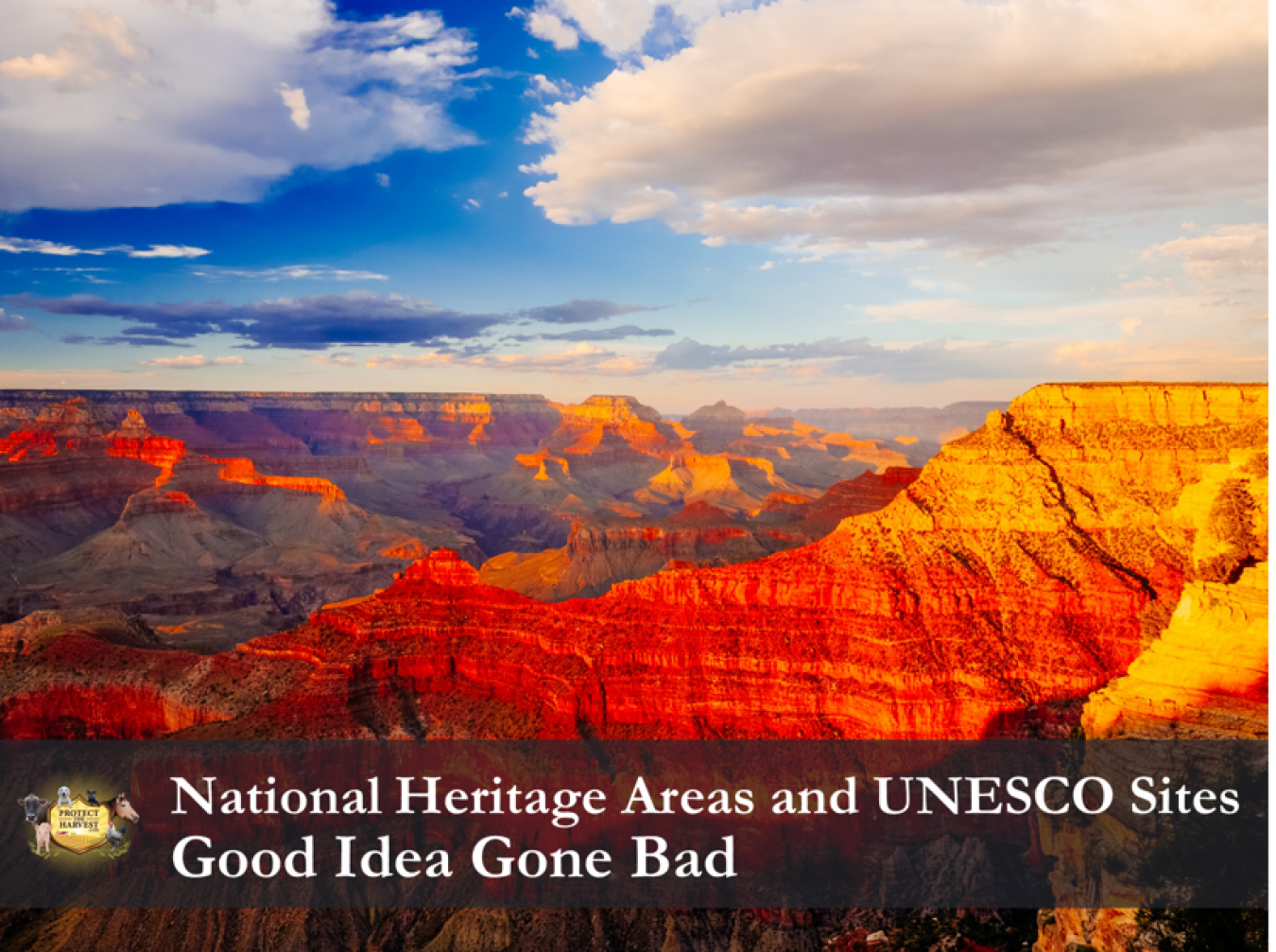 Federal Land Grab or Protection of Areas of National Interest?

Supporters of NHAs say that they protect lands and traditions and promote tourism and community revitalization. Opponents contend that they are a threat to personal property rights and lead to federal control over nonfederal lands. Opponents also argue that NHAs may be burdensome or costly to the federal government, which is already struggling to manage national debt.
According to H.R.1049, the National Heritage Act of 2020, passed by the House of Representatives on
December 3, 2020, there is protection against personal property loss. As with other legislation, wording can be changed, which is why so many states with areas designated to become NHA’s are so adamantly opposed to them.

What Exactly Is a National Heritage Area?

A NHA is a site designated by the United States for the intention to encourage the historic preservation of the area. An additional goal is to encourage the appreciation of the history and heritage of the site. These are NOT National Park Service units or federally owned or managed land. Instead, these NHA sites are administered by state governments, nonprofit organizations, or PRIVATE corporations (referred to as local coordinating entities). The National Park Service may serve in an advisory role, with limited technical, planning and financial assistance.

Currently there are 55 National Heritage Areas, some as small as 3 acres, and others encompassing entire counties, and even the entire state of Tennessee. The Hudson River Valley NHA is 3 million acres; while the Tennessee Civil War NHA covers the entire state of roughly 26,973,000 acres. Some are measured in miles, or in the number of counties within the NHA. Blue Ridge NHA in North Carolina involves 25 counties, and the Ohio and Erie Canalway cover 110 miles. Size doesn’t matter, as long as the entire area designated is included.

There is a proposed NHA under consideration that would include 49 counties in both Kansas and Nebraska. Currently, there is a group seeking to form a nonprofit called the Kansas and Nebraska Heritage Area Partnership (KNHAP). Their next step would be to conduct a feasibility study regarding the NHA.

There is already a NHA in Kansas and Western Missouri called the Freedom’s Frontier National Heritage Area (FFNHA) established in 2006. Since economic development usually goes hand in hand with more jobs, one would expect that to have happened, however, FFNHA has not seen that. Of the 40 counties in FFNHA, only 13 counties saw an increase in population around Fort Riley (military post), Manhattan (home of a Bio-security Lab), and Metropolitan Kansas City areas. In addition, 27 counties saw a decrease in population, which infers a lack of jobs and economic development.
Opponents of the new KNHAP NHA question what benefit FFNHA has provided for the people of Kansas and Missouri. They also want to know where the money went that the FFNHA received for promoting economic development and tourism; and whether the proposed KNHAP will truly help the 26 counties in Kansas, and 23 counties in Nebraska.

NHA’s are created by Congress and each area has its own authorizing legislation and a set of unique resources and goals. An area that is to be considered must have specific elements. The landscape must be a nationally unique natural, cultural, historic, or scenic resource. When related sites are linked, they must tell a unique story about the United States. NHA’s are similar to National Parks, but are not considered as such. Unlike National Parks, they are large “lived-in” landscapes.
There is no comprehensive statute that establishes criteria for designating NHAs or providing standards for their funding and management. NHA’s may receive funding from a wide variety of sources. In the past, Presidential Administrations expressed interest in having the NHAs become self-sufficient, but this has not been the case for all of them.

The National Parks are federally owned and managed lands, whereas NHA’s are typically state, local or private ownership, or a combination. There are 63 National Parks administered and operated by the National Park Service. These are also created by Congress, and are designated for their natural beauty, unique geological features, diverse ecosystems, and recreational areas. This sounds very similar to the description of a National Heritage Area. In addition to the parks, there are National Monuments chosen for historical or archaeological significance. 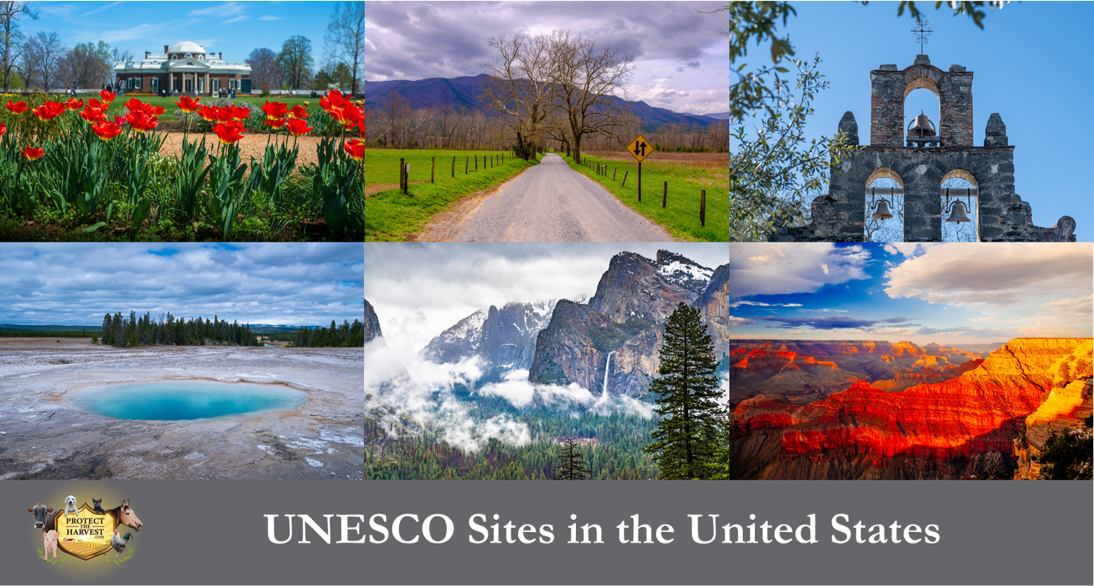 The United Nations is Involved in the National Parks System - UNESCO

Of even more concern is that the United Nations is involved in the National Parks System.
In 1972, the General Conference of the United Nations Educational, Scientific and Cultural Organization (UNESCO) held a meeting in Paris called the Convention Concerning the Protection of the World Cultural and Natural Heritage. At this convention, definitions of natural and cultural heritage were clarified, rules of procedure were adopted, and funding was established.

According to Article 6 of the convention:
“Whilst fully respecting the sovereignty of the States on whose territory the cultural and natural heritage mentioned in Articles 1 and 2 is situated, and without prejudice to property right provided by national legislation, the States Parties to the Convention recognize that such heritage constitutes a world heritage for whose protection it is the duty of the international community as a whole to co-operate.”

To read more on the UNESCO site click HERE

Most Americans are not aware that there are fourteen National Parks that are named UNESCO World Heritage Sites (United Nations Educational, Scientific and Cultural Organization). Twenty-one National Parks are named UNESCO Biosphere Reserves. Eight National Parks fall into both programs.
According to UNESCO’s website, the definition of a biosphere reserve is an area to “promote solutions reconciling the conservation of biodiversity with its sustainable use. They are learning areas for sustainable development under diverse ecological, social and economic contexts, touching the lives of more than 250 million people.

The sheer amount of land dedicated to UNESCO World Heritage Sites and Biosphere Reserves is mindboggling. The Cultural sites in the National Parks totals approximately 62,557 acres while the Natural sites totals 381,245,017 acres. The Biosphere Reserve acreage is 59,485,026 acres. The two groups together total roughly 440,792,600 acres of land.

Who Benefits from the UNESCO Designation?

This leads to a logical question: If large areas of US soil are considered National Heritage Areas, would they then be at risk of a UNESCO designation?

History has shown that the Eminent Domain Clause has been upheld by the U.S. Supreme Court several times for National Parks, and by cities expanding local parks. Parks, research facilities and other non-essential services are not specified in law as prohibited uses of eminent domain, so they are by default allowed. Even thought Section 7 of H.R. 1049 specifically spells out that nothing in the Act allows for the loss of rights of any property owner, the history of what has happened with the National Parks is obviously of concern for property owners in those states where NHA’s have been proposed.

“SEC. 7. PROPERTY OWNERS AND REGULATORY PROTECTIONS.
Nothing in this Act shall be construed to—
(1) abridge the rights of any property owner, whether public or private, including the right to refrain from participating in any plan, project, program, or activity conducted within the National Heritage Area;
(2) require any property owner to permit public access (including Federal, Tribal, State, or local government access) to such property or to modify any provisions of Federal, Tribal, State, or local law with regard to public access or use of private lands;
(3) alter any duly adopted land use regulation or any approved land use plan or any other regulatory authority of any Federal, Tribal, or State, or local government, or to convey any land use or other regulatory authority to any local coordinating entity;
(4) authorize or imply the reservation or appropriation of water or water rights;
(5) diminish the authority of the State to manage fish and wildlife including the regulation of fishing and hunting within the National Heritage Area;”

Changing Language Is Not a Protection Against Radical Global Ideology

We are already seeing plans by the Biden Administration to annex 30% of America’s land and waters for compliance with the United Nations Sustainable Development Plan. The “30 by 30” plan to conserve at least 30% of our land and water by 2030 is part of an international push for conservation aiming to protect biodiversity and mitigate climate change. The United Nations plan has had numerous names over the years; Rio Accord, Climate Accord, Agenda for the 21st Century, Agenda 21, Agenda 2030, Green New Deal, UN Sustainable Development Plan, and Goal 13. Now the plan has a new name established by President Biden’s Executive Order called “30 by 30” and the corresponding preliminary report has been titled the Conserving and Restoring America The Beautiful.

Protect The Harvest has written about the U.N’s plan for our future HERE

H.R. 1049, the National Heritage Act of 2020, specifically mentions that private property rights are not to be taken from property owners, nor are they to be punished if they are not interested in becoming involved with a NHA. However, this language was dated in December 2020. We are very aware that the language in an Act can be changed by passing a more current Act. Since NHA’s inception there have been several new acts, some for the Park Service, others naming new Heritage areas.

Information on the United Nations website makes it clear they are aiming to use NGOs to implement their agenda. If you watch the CSPAN video of the United Nations Agenda 21 being ratified by Congress you can see this strategy being announced. We believe additional governmental “designations” or identified “special areas” are setting the stage to take away property rights and that it may make it harder for American farmers and ranchers to feed our nation and the world.
There are numerous NGOs that have inserted themselves in all areas of government from local to federal and it is a concern that these groups are given a seat at the table when their representatives are not elected. They are pushing their own ideology and influencing government; and sadly the voice of the people is not considered. This is especially concerning when there are groups determined to end animal agriculture, end animal ownership, and strip away private property rights.

Prev Article
Good News Out of Colorado
Next Article
Eat that Burger!