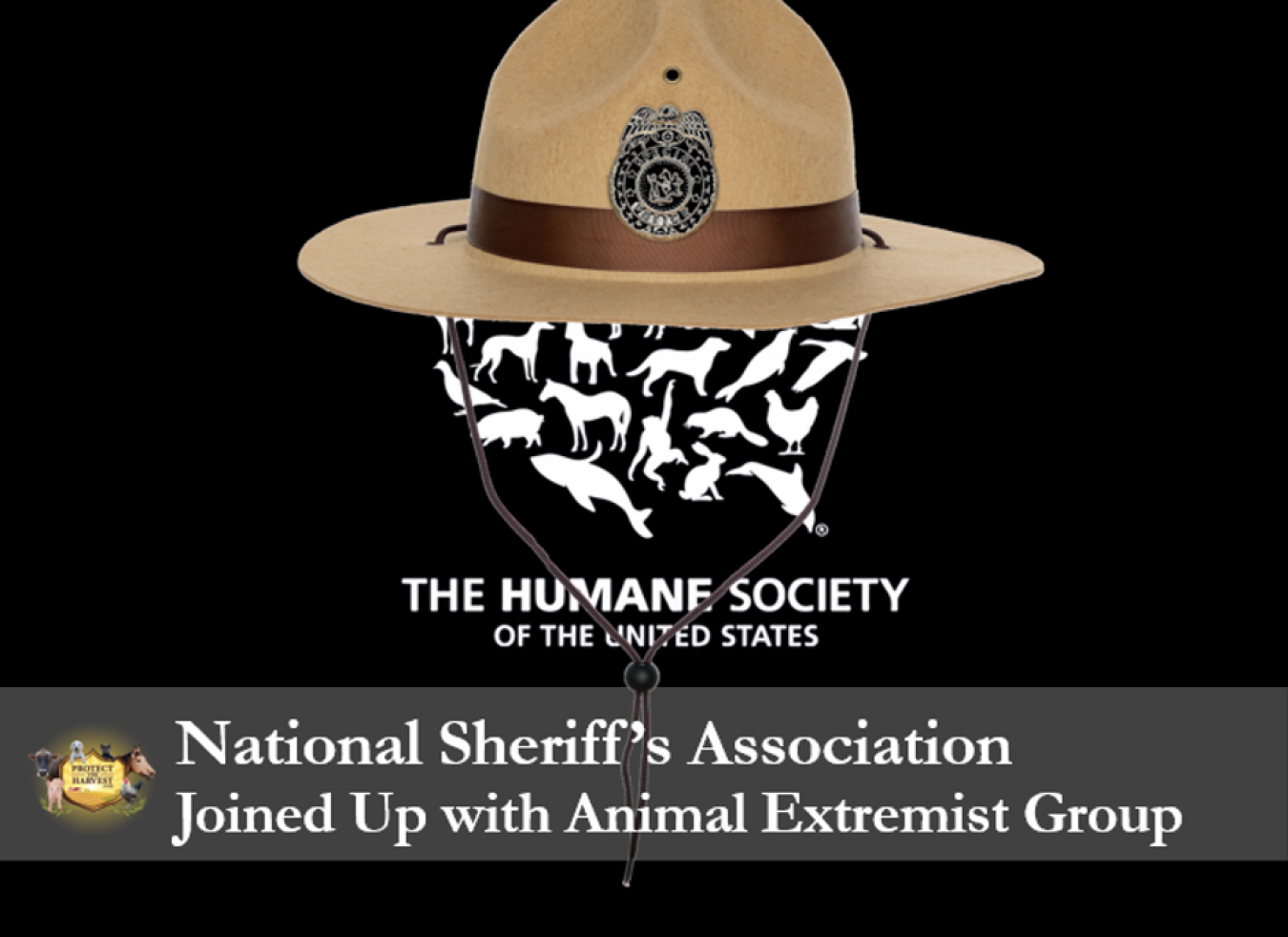 When the National Sheriffs’ Association Joins Forces with an Animal Extremist Organization, Who Ya Gonna Call?

Parody of Ghostbusters aside, the partnership between the National Sheriffs’ Association and Humane Society of the United States (HSUS) should be considered frightening for all who own animals, no matter what their use is.

It is true that there is a correlation between animal abusers and those who go on to become involved in violent crimes, child and elder abuse, and sexual abuse. This makes knowing how to deal with animal cruelty cases imperative for local law enforcement.

The question comes down to whether the HSUS, a group that has a negative history of dealing with perceived abuse and illegal confiscation of animals, should be the group educating the National Sheriffs’ Association.

Who Exactly is HSUS?

We have written about HSUS multiple times and their corrupt leadership, but a few key points to ponder are:

Other important items to know are from their “Statement on Farm Animals and Eating with Conscience” and their “Three R’s”:

In other words, they are an animal extremist organization that is pushing their vegan agenda through lobbying efforts, fundraising, and taking VERY good care of their executive staff.
Having the HSUS train law enforcement on dealing with animal cruelty is like putting a fox in the hen house.

How HSUS Reels in Law Enforcement

Law enforcement agencies face budgetary issues just like most of America. When a group that “appears” to be reputable offers FREE training, most agencies will jump at the chance to get their officers trained in areas not covered by most academies.

The National Sheriffs’ Association is one such group that has been reeled in by HSUS. Their statement regarding the partnership says it all:
“We are proud to work with The Humane Society of the United States because of their expertise on illegal animal cruelty and fighting and frequent collaboration with law enforcement in pursuing those crimes. The HSUS has provided free training to tens of thousands of law enforcement officials across the country on how to investigate illegal animal cruelty and its connection with crimes against people.

The organization is also a resource for law enforcement when they are confronted with a significant case of cruelty or fighting in their community. The HSUS has provided investigative assistance and the care of thousands of animals seized from large-scale animal hoarders, illegal puppy mills, and animal fighting operations.”

Sounds legitimate right?
When an animal extremist group has free rein to train local law enforcement, there is a great risk of corruption. The animal extremist influence on law enforcement is a justifiable cause for worry amongst people who own animals.
HSUS has been known to take extreme measures to end all animal ownership and production. They have also been known to participate in illegal animal seizures and use those seizures to raise considerable funds to pad their coffers. Therefore, with law enforcement receiving training and encouragement from animal rights extremists, animal rights groups are one step closer to achieving their goal of ending animal ownership.

There are multiple cases involving HSUS and illegal confiscations of animals, as well as illegally filming abuse and not reporting it. With farm animal settings, the vegan agenda appears to be the driving force behind many of their videos purportedly showing animal abuse, when in fact, they are highly edited with a narrative that is accusatory in nature.

Below are just a couple of examples of HSUS’s involvement in unlawful confiscations.

Fortunately, with the help of Gary’s daughter Missy, Protect The Harvest, and many others, Gary was successful in fighting to keep his livestock and 40-year breeding program.

The Sennes of Mississippi:
David and Mary Ellen Senne had their property raided on July 11, 2018, by the Jones County Sheriff’s Department and the Humane Society of the United States. Dozens of animals were seized from their 161-acre property on Lyons Ranch in Jones County. The Sennes, who claimed that the local animal shelter used them as a doggy drop-off, surrendered the animals with the exception of their 5 elderly dogs that lived in their home. Mary Senne reportedly accepted an animal surrender form from HSUS with these words handwritten, referring to the household dogs: “All animals removed from the above listed property with the exception of Miss Poo, Loco, Sister Angel, Precious, and Abby.” The note clearly stated the 5 dogs should have remained in the care of the Sennes.

The Sennes sued and the actions of both HSUS and the sheriff’s department were found to be unconstitutional. Not only did both HSUS and the sheriff lose the original case, but they also lost on appeal and the local prosecutor declined to prosecute the animal cruelty charges because they were based on a search warrant that was deemed unconstitutional.

Unfortunately, the 5 dogs had been transferred around the state of Mississippi and to an airport in Virginia, where they were retrieved by a rescue who adopted all 5 dogs out to new families. Due to the age of the dogs and the fact that they were in good homes, the Sennes decided not to uproot them again. For all of this, the Sennes were awarded $5,000, the maximum allowed.

Knowing the Background, Why Would the Sheriffs’ Association Choose to Partner With HSUS?

It’s understandable that with the negative perception many people have of law enforcement, agencies would want to make improvements in areas they believe are weak. Animal cruelty enforcement, how to engage with vicious dogs, and knowing that animal abuse can lead to other violent crimes are most likely the impetus.
However, choosing to partner with an animal extremist group that is known for its radical ideology, anti-farming legislation, and promoting a vegan lifestyle should raise eyebrows.

That and the fact that you get what you pay for; if it is free, it is probably not the best training available.