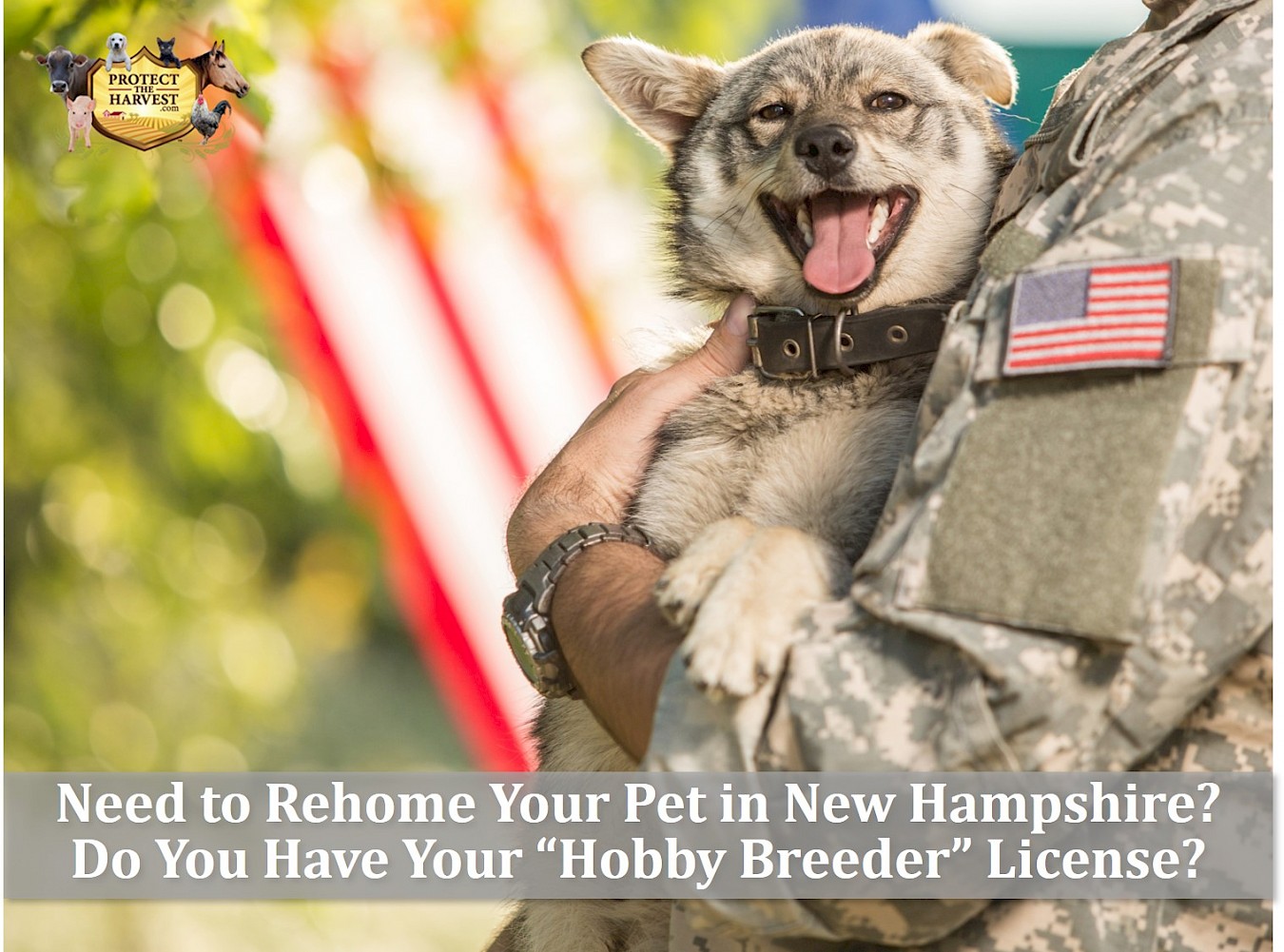 NEED TO REHOME YOUR PET IN NEW HAMPSHIRE? DO YOU HAVE YOUR “HOBBY BREEDER” OR “PET VENDOR” LICENSE?

Update: HB688 was tabled, then added into HB2, which was passed, however on June 28, 2019, Gov. Sununu vetoed HB2 and it was “adjourned sine die” (no plans to bring it back up at this time). This is good news for the state of New Hampshire; however, it also serves as an important example of troubling legislation animal rights groups continue to push around the country.

Imagine needing to rehome your pet, but in order to not break the law, you must get licensed as a “hobby breeder” or a “pet vendor”. HB688 was just introduced in New Hampshire in January and was considered in a public hearing before the House Environmental and Agriculture Committee on February 7th, 2019.

HB688 - Relative to Transfer and Inspection of Animals
This bill defines the term “hobby breeder”, and further defines “pet vendor” and “commercial breeder”. If the bill becomes a law, anyone who transfers any live animal for a fee (under 30 animals per year) would need to be licensed by the state as a “hobby breeder”.
Anyone transferring ownership of 31 live animals or more a year would need to be licensed as a “commercial breeder”, which includes additional regulations. A “pet vendor” is defined as any person, firm, corporation, or other entity engaged in the business of transferring live animals or birds customarily used as household pets to the public, with or without a fee or donation required, and whether or not a physical facility is owned by the licensee in New Hampshire, when transfer to the final owner occurs within New Hampshire. "Pet vendor" does not include animal shelter facilities.

If classified as a “hobby breeder”, the person would be subjected to these regulations:
• Must register with the state;
• Allow inspection (warrantless searches) of their premises by the State, local officials, law enforcement, or health officials;
• Submit records to the above-mentioned parties or any member of the public;
• Personal information and every exchange will be included in a new statewide "Animal Transfer Database;"
• Each individual animal must have identification records;
• Maintain substantial paperwork and records including vaccination records, rabies certificates and any other pertinent documents to each animal sold.

It is important to note that this bill would include any live animal, not just dogs or cats. The sale of reptiles, amphibians, birds, and rodents would be affected by this bill. Imagine selling your pet snake to a friend and needing to be licensed by the state as a “hobby breeder” or as a “pet vendor” – as well as subject yourself to all that it entails.

Intended Consequences – Making Animal Ownership Undesirable
This is all a calculated effort to make owning animals undesirable. Animal rights activists and organizations are hoping that by pushing these ridiculous regulations on pet owners that the hassle will be too much for them to continue owning pets, or engaging in a hobby or business involving animals.

Residents Forced to Open Their Home to Local and State “Officials”
As shown above, the regulations that New Hampshire residents would have to abide by as a “hobby breeder” or “pet vendor” are far reaching. Although “hobby breeders” inspections are announced, it does not negate the intrusion posed by the government on anyone who simply sells an animal. New Hampshire’s residents are being subjected to a process that inherently removes the privacy of their home even if they are not in the business of selling animals – a “hobby breeder” license is necessary when selling just one animal within a calendar year.
If licensed as a “pet vendor” this bill would force citizens to give up that due process and allow for unannounced inspections of their premises. According to the bill’s text, inspections could be completed by state or local “officials”, or animal control or law enforcement. What is an “official”? This verbiage is quite vague, which would be problematic because it does not define what kind of state or local “officials” could show up at your home and “inspect” it.

Personal Information a Matter of Public Record
Additionally, by having residents’ personal information published for any and all to see on a database, they are opened up to scrutiny and possible attack by animal rights organizations and activists. These groups will know the details and locations to every single family in the state that is breeding animals, or any person that simply just rehomes one of their pets. Beyond that, who will create and maintain this database? What will it cost the state to do so? According to the fiscal note associated with the bill, the cost is an “indeterminable increase” at this time, but their assumptions include almost a half million dollars just to get the database up and running. Over the course of 4 years, in order to implement the bill’s regulations, they estimate it will cost at least $3,896,000 to the tax payers.

What This Looks Like for Pet Owners
This bill would affect New Hampshire residents across all walks of life. The bill contains confusing language that in turn makes deciphering its meaning even more confusing. In order to be considered a “pet vendor” you must be “any person, firm, corporation, or other entity engaged in the business of transferring live animals or birds customarily used as household pets to the public, with or without a fee or donation required…”

What does “in the business of selling live animals” mean for residents? How can you be in the business of selling animals if it includes any person who transfers the ownership of an animal with or without a fee? Our concern lies with the vague and confusing wording of the bill. We worry that residents may not fully understand the expectations asked of them, and if it passes, they may unintentionally be breaking the law when selling an animal, or simply rehoming one. In an effort to clarify this confusing language of the bill we have tried more than once to reach the Representatives who sponsored this bill and were unable to reach them.

“Live Free or Die” State Motto?
New Hampshire already has sufficient animal welfare laws to protect animals from harm or cruelty like Criminal Code 644:8. The Humane Society of the United States even has New Hampshire ranked as one of the top 20 humane states in the U.S. So, instead of pushing more unnecessary and insensible regulations on residents, the state should focus on enforcing the animal welfare laws already in place.
This bill would punish law-abiding families who needed to rehome their pet parrot or had one small litter out of their favorite dog, instead of the criminals who should be targeted. New Hampshire’s official state motto is “Live Free or Die”, however this type of far-reaching legislation does not seem to match that credo. This bill would actually limit the rights and freedoms of New Hampshire residents.

Bill Being Pushed by Politicians Associated with the HSUS
Both Senator Watters and Senator Bradley, who sponsored this bill, have previously joined the Humane Society of the United States on animal rights legislation in the state of New Hampshire. In doing so, they have shown that their values align with the animal rights agenda. By sponsoring this bill, we can assume that this type of legislation is in line with that ideology and is further pushing animal rights goals of eliminating animals in human care rather than being for the good and welfare of animals.

What Can You Do to Voice Your Concerns?
If you are a New Hampshire resident concerned about this bill, your representative needs to know. You can call or email your member of the NH House of Representatives today. To identify your member and their contact information go to https://www.gencourt.state.nh.us/house/members/default.aspx.
Remember to be civil and professional when contacting legislators.
Concerned residents are also encouraged to contact the members of the House Environment and Agriculture Committee and express their viewpoint with HB 688. Committee Contact List: http://www.gencourt.state.nh.us/house/committees/committeedetails.aspx?id=2