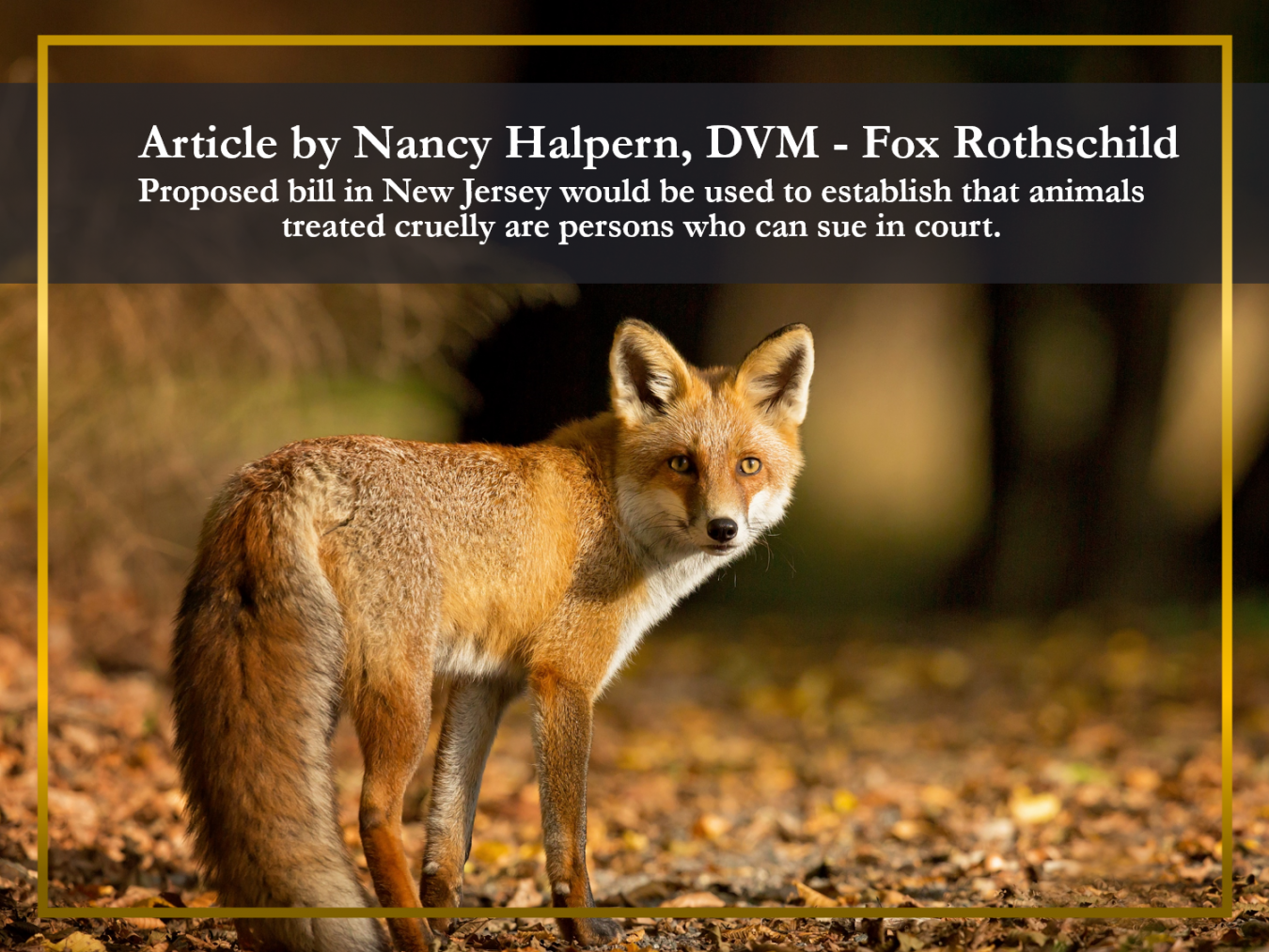 Proposed bill in New Jersey would be used to establish that animals treated cruelly are persons who can sue in court.
By Nancy E. Halpern, D.V.M. on September 8, 2020

The bill that provides for an advocate in criminal cases in New Jersey, concerning the welfare of care of animals has been reintroduced as A 4533 with additional language which renders it even more problematic for animal owners than before.

A preamble was added as Section 1, stating

The Legislature finds and declares that animals are sentient beings capable of experiencing pain, stress, and fear. It is the policy of New Jersey that, in order to protect animals from experiencing pain, stress, or fear at human hands, animals are to be treated humanely. For that reason, animals shall be considered the victims of animal cruelty crimes and shall be treated as such in a court of law. (Emphasis added).

If this bill passes, the state should expect to see cases filed on behalf of animals as animal cruelty victims who are legal persons at least with respect to their rights under the animal cruelty law, the argument Plaintiff and Appellant have used in Justice v. Vercher, No. A169933 (Washington Co. Cir. July 8, 2019).

In an Amicus Brief filed by law professors in Justice v. Vercher, No. A169933 (Washington Co. Cir. July 18, 2019), they state that “[t]he Oregon Supreme Court [which] has construed Oregon anti-cruelty laws as defining animals (not their owners), as victims of crime.” (Animal Law Professors Amicus Curiae Brief, p. 8). The Oregon statute cited describes animals as sentient being capable of experiencing pain, stress and fear. Id., at pp. 6-7 (citing ORG 167.305).

The amendments to proposed A 4533 expressly include both statements-that animals are sentient beings and that animals shall be considered the victims of animal cruelty crimes, in an apparent attempt to create a stronger argument that in such cases, they would be considered legal persons. As Professor Richard Cupp stated, discussing concerns about the elevation of animals to persons,

[i]f courts adopted this radical animal legal personhood theory, it could lead to personhood arguments ostensibly on behalf of hundreds of millions or perhaps even billions of other animals as potential plaintiffs, and could allow animal rights activists to flood the courts with a huge volume of lawsuits asserting to represent the new legal persons. Further, if animal legal personhood were accepted in this context, litigation would doubtless quickly spread to lawsuits challenging biomedical research on such ‘persons,’ any commercial use of such ‘persons,’ and pet ownership of such ‘persons.’ Justice v. Vercher, No. A169933 (Washington Co. Cir Nov. 12, 2019) (Professor Richard L. Cupp Jr Amicus Brief at p. 6.).

In addition to these real concerns about the results of the potential consequences of the adoption of A 4533, adding an additional advocate for animals in cases of animal cruelty is not needed in New Jersey. County prosecutors, and municipal prosecutors if assigned, are already charged with that duty.

An animal cruelty prosecutor shall:

(1) designate any municipal or county prosecutor as the animal cruelty prosecutor of the county, and may designate any assistant animal cruelty prosecutor as needed, who shall investigate, prosecute, and take other legal action as appropriate for violations of any provision of article 2 of chapter 22 of Title 4 of the Revised Statutes, and who may serve in such capacity on a part-time basis if the responsibilities of the position allow. L.2017, c. 331, § 28, eff. May 1, 2018.

This bill will not benefit animals since the protection of their rights not to be treated cruelly is already invested in prosecutors. This will only benefit advocates who want to advance the rights of animals as persons.