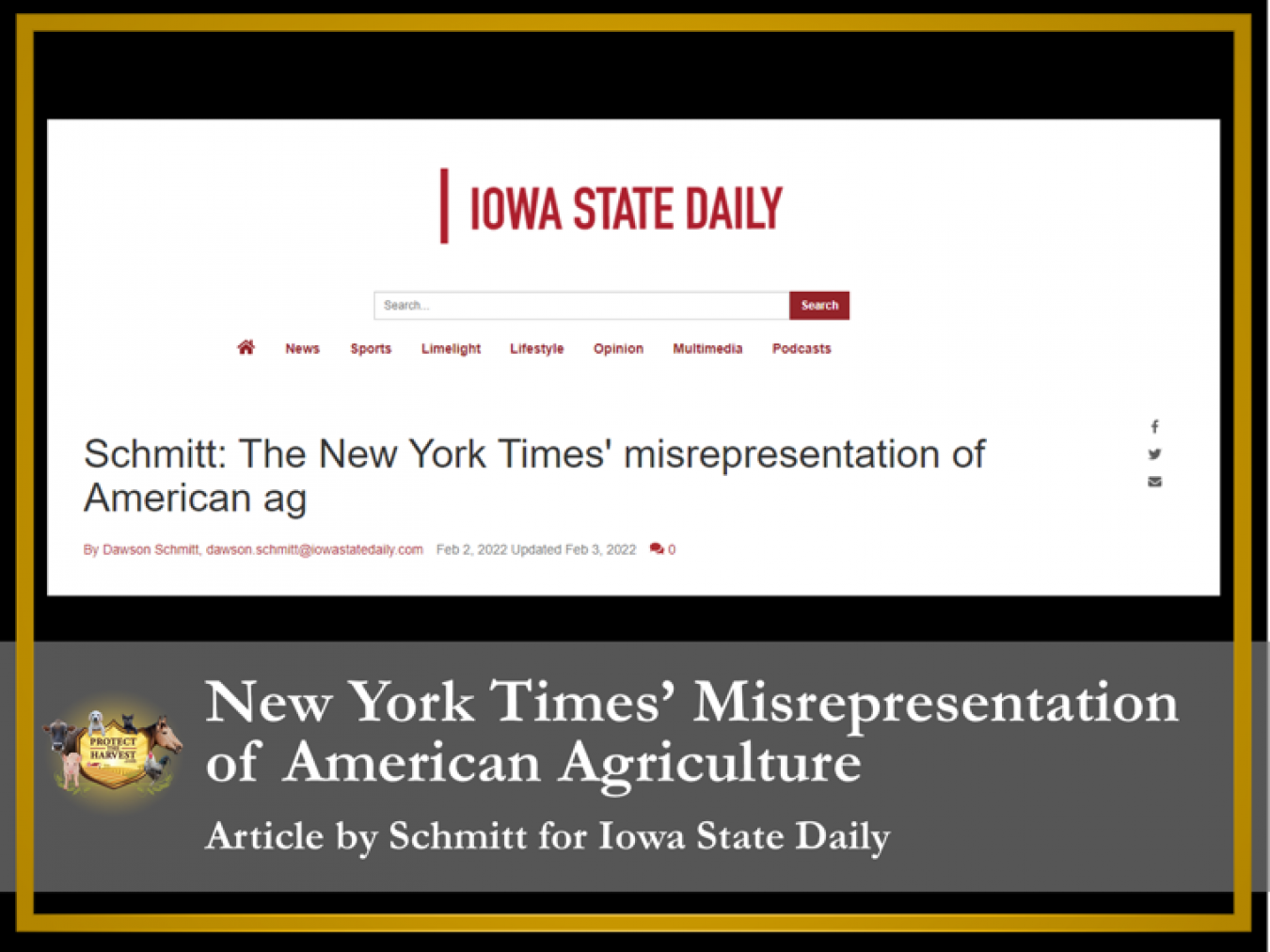 The video immediately sparked a backlash from agricultural groups, and rightly so. The National Beef Cattlemen’s Association (NCBA) responded to the Times, saying the “claims about emissions and land use are not true.”

According to the EPA, agriculture makes up only 10 percent of greenhouse gas emissions in the United States. While fermentation in ruminant livestock accounts for nearly 30 percent of total methane emissions, it may not be as detrimental to the environment as the Times makes it out to be, where I already explored this topic in a previous column.

NCBA also pointed out that the video leaves out facts about land use in America and the relationship farmers and ranchers have with what is and is not farmed. The Times is right that agriculture uses a significant amount of land, where they point out that much of it is used to raise livestock, yet they fail to mention the difference between arable and non-arable land. Arable land allows you to grow crops, either vegetables or commercial farm commodities. However, non-arable land is unsuitable for crop production, making livestock an easy asset to maintain the landscape.

Furthermore, well-managed livestock herd grazing has multiple benefits that help the environment that even environmentalists can appreciate. Properly managed grazing systems can reduce fire hazards and promote plant and wildlife diversity, which sounds better than turning the land over to urban development.

Yet that is not enough for Sen. Cory Booker, the outspoken vegan who has introduced legislation multiple times that would severely restrict livestock production and allow for more Big Government control over food production. He believes our food system is broken. That may be so, which I am for finding solutions and fixing the many issues of farmer income and supply chain disruption to ensure agriculture is safe and profitable.

Aside from excluding the facts, the Times’ article labels American agriculture as propaganda, letting large lobby groups influence legislation that protects farmers. Even if the video doesn’t refer to small farmers and ranchers as propagandists, it still labels them as such because many of the large groups the video attacks (such as the American Farm Bureau Federation) represent farmers. Farmers and ranchers pay dues to become members of the organization and access resources that help economically and environmentally sustainable.

In agriculture, farmers are encouraged to share their stories, yet the Times says their stories are a part of a myth. But the real myth comes from The New York Times’ belief that farmers and ranchers don’t care.

They only want larger corporate-appearing farmers to depict agriculture because it makes the industry an easier target. Agriculture is committed to sustainability to ensure the farm or ranch can remain for generations, and it remains committed to feeding the world. Farmers aren’t paid to destroy the planet. They are paid to fuel, feed and clothe it."