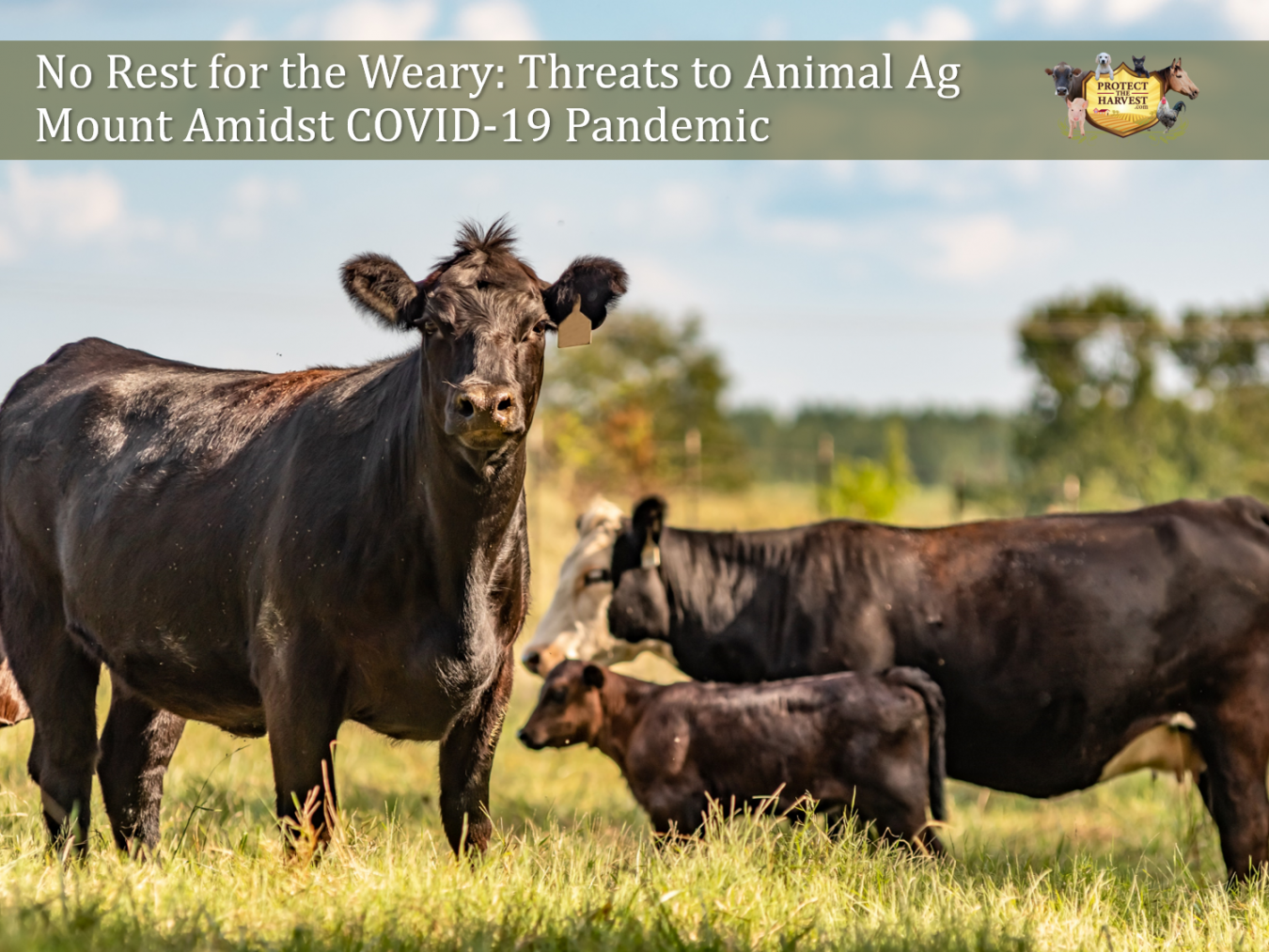 NO REST FOR THE WEARY: THREATS TO ANIMAL AGRICULTURE MOUNT AMIDST COVID-19 PANDEMIC

As the world focuses on the COVID-19 pandemic with the uncertain state of our economy and disruptions to our daily lives, animal extremists are charging full steam ahead towards their goal: the elimination of animal agriculture. Farmers and ranchers have worked tirelessly throughout the pandemic, and for generations before this, to make sure that throughout all of the uncertainty this time brings, there is safe and affordable food on our plates each day. However, there are some working to change that.

Anti-Animal Ag Agenda Uses the Pandemic to Malign Livestock Production
In May we shared that the organization, Physicians Committee for Responsible Medicine (PCRM), was actively working to exacerbate the turmoil brought by the pandemic by falsely claiming that livestock markets were to blame for the COVID-19 virus and its spread. They even filed a legal petition with the U.S. Surgeon General to demand that all live animal markets in the United States be shut down immediately. Had their demands been fulfilled, there would have been serious and extremely detrimental consequences to our food supply chain. This would have negatively impacted the availability of food and other goods at the grocery store.
Additionally, the Los Angeles Times published an Op-ed article in April by Viveca Morris, Executive Director of the Law, Ethics, & Animals Program (LEAP) at Yale Law School. In the article Ms. Morris made numerous negative assertions against animal agriculture. She attempts to make her assertions appear legitimate on the surface, but with deeper research her animal extremist viewpoint regarding the COVID-19 pandemic is revealed. The assertions included blaming recent infectious diseases on animals, blaming the way we treat animals and their habitats, as well as blaming agriculture, large modern farms, and deforestation for the outbreak and mutation of the virus.
Both the petition from PRCM and the Los Angeles Op-Ed are blatant examples of animal extremist viewpoints that not only malign agriculture but also wrongly influence the public into thinking livestock production is to blame for the virus. This type of misinformation is what the agricultural community is constantly up against when it comes to what the public really knows about our industries.

Direct Action Everywhere Stops at Nothing to Produce Anti-Animal Ag Content
Amidst the Coronavirus pandemic, Direct Action Everywhere (DxE) has continued to raid and illegally trespass on farms, particularly in the Midwest, in order to “expose” them. This group is forthcoming about their disregard of private property and has been charged with felonious trespassing numerous times in the past. It has also been revealed that they have doctored images and video footage to rile up emotions and misinform the public. This group cannot be trusted and is using the pandemic to further their agenda.

Robert Kenner Films Seeks to Misrepresent Agriculture in the Midwest
DxE isn’t the only group that has been traveling the Midwest seeking to “expose” agriculture practices. Robert Kenner, a filmmaker who co-produced the animal extremist movie, Food, Inc. has been traveling in the region pursuing opportunities to film farms. Unfortunately, they have not been forthcoming with their intent and based on the team’s inclination to misrepresent agriculture in the past, they cannot be trusted. The Indiana Pork Producers organization even notified members, urging them to be cautious of requests and asked that producers not engage with them in any way.

Project Counterglow Should Be a Wake-Up Call to All Animal Owners
Even more concerning is the newest animal extremist campaign, Project Counterglow. Project Counterglow is an animal extremist website that shows an interactive map with the physical addresses and GPS coordinates of more than 27,500 animal enterprise facilities including feedlots, butcher shops, zoos, animal research facilities, rodeos and more. The website invites the public to add facilities near them with addresses and identifying information included. A similar project in Australia, called the “Farm Transparency Map”, was launched last year to the outrage of Australia’s farming industry. The map was used by animal extremists to terrorize farmers and ranchers. Our concern is that Project Counterglow will be used in the same way. This website should concern all animal owners as it has the potential to invite trespassing and criminal activity to those locations.

DxE Has Ties to Project Counterglow
The Project Counterglow website was created by Kacia Doolittle, an animal rights activist romantically involved with DxE spokesman Matt Johnson. Beyond their relationship, she also aligns with DxE’s mission and values. DxE has not claimed authorship of the website and initiative likely for liability reasons, however the intent of the website is to expose facilities associated with animal enterprises which in turn allows for activists to take action against them. Based on DxE’s past we know that those actions are inevitable.

The Pandemic Has Not Slowed the Animal Extremist Agenda
It is easy to see why farmers and ranchers are private about their own facilities. It seems as though there is a group seeking to misinform the public about agriculture around every turn. The pandemic has made for a difficult and tumultuous spring and summer. This has not been made easier by animal extremist groups. Their steadfast commitment to their goal of eliminating animal ownership should only inspire us to work that much harder to protect it. We have to share positive stories, factual information and engage regularly to help maintain our rural way of life.
We, at Protect The Harvest, will always work diligently to inform the public about threats to animal enterprises, protect animal owners from those threats, and respond accordingly.