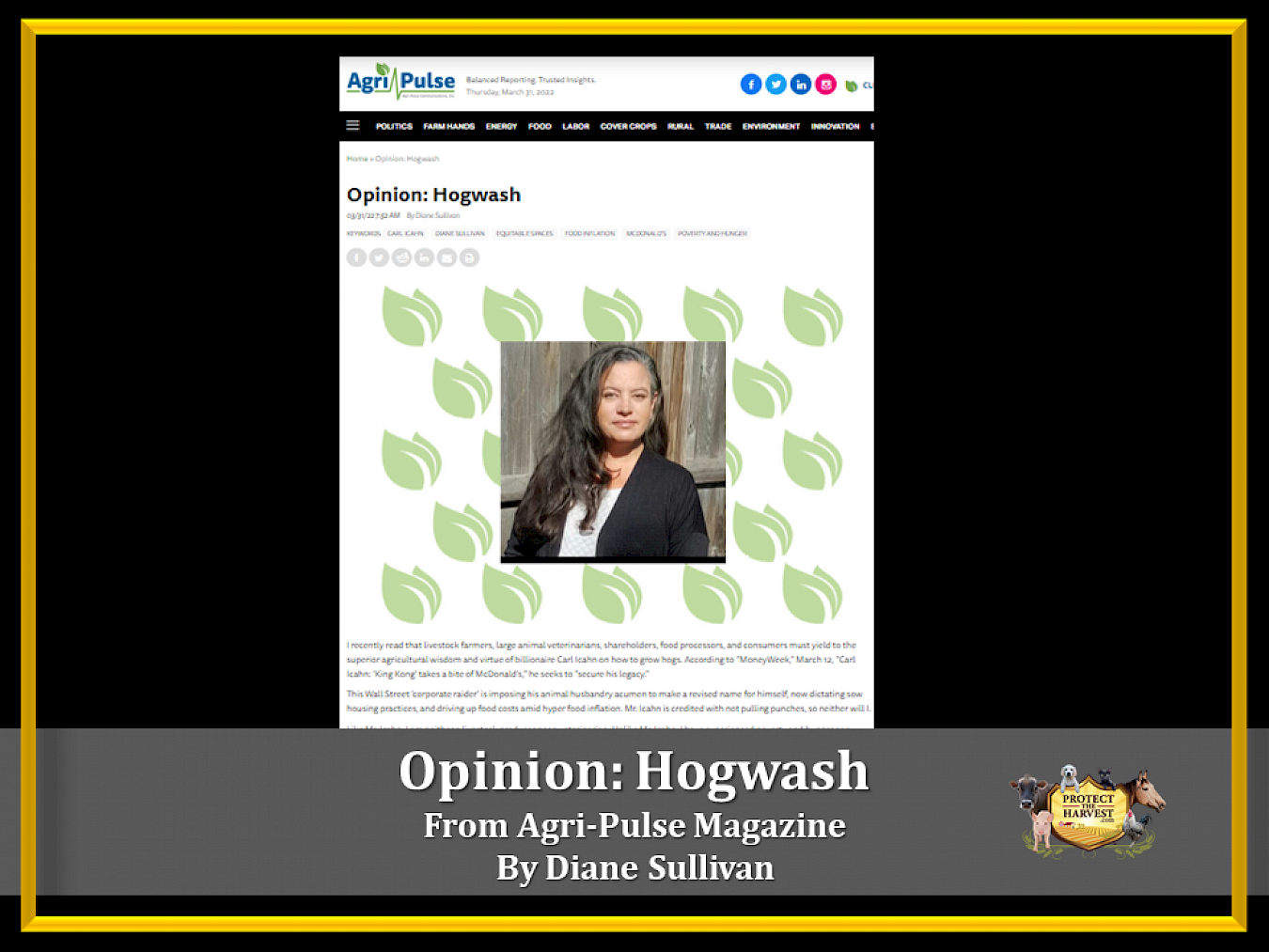 From an article in Agri-Pulse
by Diane Sullivan

I recently read that livestock farmers, large animal veterinarians, shareholders, food processors, and consumers must yield to the superior agricultural wisdom and virtue of billionaire Carl Icahn on how to grow hogs. According to “MoneyWeek,” March 12, “Carl Icahn: ‘King Kong’ takes a bite of McDonald’s,” he seeks to “secure his legacy.”

This Wall Street ‘corporate raider’ is imposing his animal husbandry acumen to make a revised name for himself, now dictating sow housing practices, and driving up food costs amid hyper food inflation. Mr. Icahn is credited with not pulling punches, so neither will I.

Like Mr. Icahn, I am neither a livestock producer nor a veterinarian. Unlike Mr. Icahn, I have experienced poverty and hunger as a mother and have dedicated my life’s work to ensuring that, regardless of income, everyone has consistent access to safe, affordable, and nutritious food. Mr. Icahn uses his influence to break up companies to build on his ever expanding $16B empire. I use mine to ensure that those who know hunger have access to the rooms where the policies that directly impact their lives are discussed, debated, and decided.

Are we supposed to allow Mr. Icahn the opportunity to virtue signal for the reliable reward of daily headlines or the affection of an heir to his fortune when his success depends on him stepping on the reputations of those working on farms for a living and those of us who actually have to look at the prices of food when we shop? Wealthy, well-fed, and disparaging of those who pull the wagon in which he rides, I suppose it is easier to look down on people when standing on their shoulders.

Most every week, there are scores of meetings of food experts discussing their high-minded vision of how others should grow and consume food. Send out a search party for one of those meetings where someone with lived experience in hunger is present. It is almost as unlikely that there will be anyone who has delivered a baby animal in foul weather and gotten their hands dirty for far less income than made by a transient McDonald’s investor on a media joy ride.

Food inflation is increasingly proving non-transitory, hitting low-income consumers the hardest. Meat, in particular, is becoming more and more expensive. Mr. Icahn proposes to make it harder to produce and purchase protein, limiting the food choices for those who cannot afford his particular preference.

There are an increasing number of activists who claim to know what is better for me and all others. This is unique because the timing and the messenger could not be more peculiar. While Mr. Icahn may enjoy badgering corporate executives; in aiming at them, he is taking a strike at farmers, and ultimately those already struggling to feed themselves.

Our nation’s farmers are perhaps among the best friends low-income consumers could have. They grow the safest and most affordable food options in the world, perhaps why those with full bellies tend to take them for granted. The farmers I know do not seek praise for their hard work, and they surely do not deserve condemnation from someone so distant from working with their strong backs and from hunger itself. Farmers’ experience in providing and relying upon the well-being of their animals, under consultation with qualified veterinarians, surely must mean more to McDonald’s than a temporary investor whose experience in farming appears to be inversely proportional to his desire to abuse it.

On behalf of those who do not and cannot take our farmers and food for granted, I appeal to those at McDonald’s, their Board, and their shareholders to outright reject this effort from a man never hungry for food, but apparently, always hungry for power and headlines.

Diane Sullivan, co-founder of Equitable Spaces, is a mother, grandmother, and anti-hunger activist from Massachusetts. Driven by her own family's experience with hunger, homelessness, and poverty, Sullivan works to ensure that community members with lived and living experiences have a voice in the on-going food policy debates that directly impact their lives by driving up the cost of food.