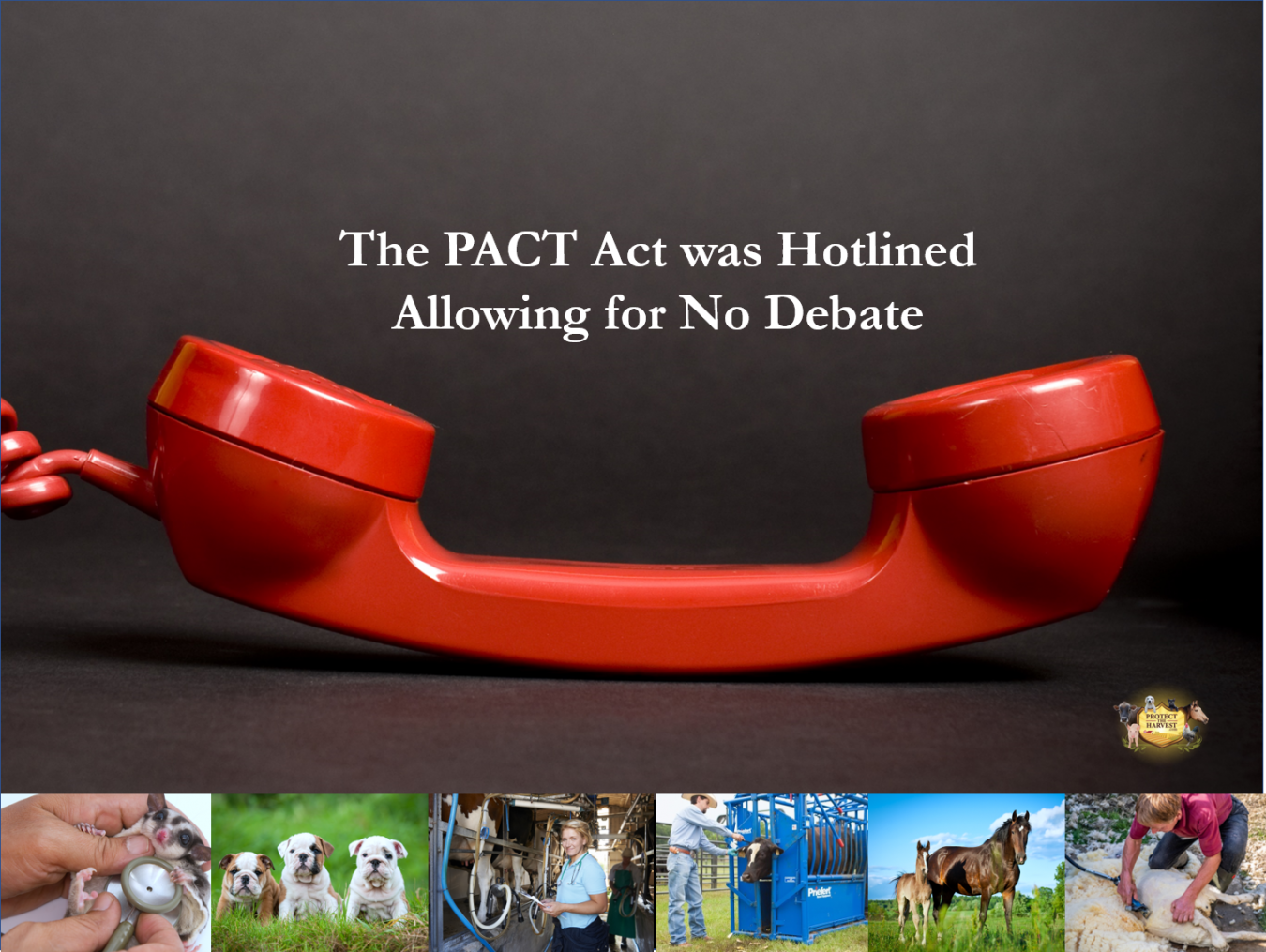 PACT ACT WAS HOTLINED - ALLOWING FOR NO DEBATE

The PACT Act Was “Hotlined” – Allowing for No Debate

The PACT ACT passed through the House and the Senate with lightning speed. The fact it happened without debate should alarm every American that owns animals. In reality, it appears to not have been officially voted on in either the House or the Senate. The process used to push the PACT Act through the Senate without debate is called “Hotlining” and it raises as many red flags as the legislation written and sponsored by animal rights groups.

Hotlining is the practice of bypassing regular Senate procedures and moving legislation through to a vote with little or no floor debate. This is done in an attempt to pass the legislation through the unanimous consent of all Senators. It’s intended use is to quickly move noncontroversial bills or simple procedural motions through the process. Unfortunately, it is used for much more than that. According to an article in Roll Call, a Capitol Hill News Source since 1955, the process is as follows:

“In order for a bill to be hotlined, the Senate Majority Leader and Minority Leader must agree to pass it by unanimous consent, without a roll-call vote. The two leaders then inform Members of this agreement using special hotlines installed in each office and give Members a specified amount of time to object — in some cases as little as 15 minutes. If no objection is registered, the bill is passed. Critics also point out that hotlining is often done during “wrap-up” at the end of the day — which can occur well after Members’ offices have closed for business — and is particularly popular in the runup to recesses.”

Several excerpts from the September 2007, Roll Call article elaborate on the hot lining process and how often it is used to pass legislation. It lists concerns and statistics. Quoting Senator Tom Coburn (R-Okla.), the article states:
“Sen. Tom Coburn (R-Okla.) said hotlining bills is not necessarily a bad thing but that Members have increasingly seen the process as a right. “People think they can hotline [a bill] and you have to agree,” Coburn said, adding that “a lot of Members are offended” if anyone raises an objection or wants to offer changes to a bill. “

The Threat of Bad Press and Fake News

In addition to lawmakers taking the attitude that hot lining is a “right” there is the very real threat of bad press. This is done by intentionally turning reasonable questions or objections into essentially fake news. As an organization, Protect The Harvest certainly has experienced these sorts of false assertions when we bring to light the true motives and consequences of animal rights based legislation. A good example of this is when we opposed Prop B in Missouri. The animal rights groups that proposed the bill attempted to slur our organization by making the claim that since we were against Prop B, we were against animal welfare protections for animals. Nothing could be further from the truth. In the article Roll Call Article about hotlining, Senator Coburn addresses this as well:

“Coburn also said that because of limited floor time, “we don’t have time to debate everything ... but if you object, they ought to be willing to negotiate with you. But usually, they put the press after you. They accuse you of being against veterans, of being against breast cancer patients ... I’ve been accused of so many things,” Coburn lamented. But he insisted that when sponsors of bills he has objected to take his concerns seriously, they often are able to work out an agreement. “

“PACT Act” is an acronym for “Preventing Animal Cruelty and Torture Act”. The name is strategic and it is one of the tactics used in the animal rights lobbying bag of tricks. Based on experience and the commentary from Senator Coburn, imagine the headlines that animal rights organizations can use as a weapon against lawmakers who might have asked questions about the language, and opposed it altogether if time had allowed.

In the same Roll Call article about hotlining the lack of transparency is discussed. Bill Allison is quoted:

“Bill Allison, a senior fellow at the government watchdog group Sunlight Foundation, said the process of hotlining has added to the lack of transparency and accountability in Congress. “Hotlining bills diminishes the accountability of Congress. Senators are forced into an ‘all-or-nothing’ posture — place a secret hold on legislation and negotiate in the back room or keep their objections to themselves. The Senate is supposed to be a deliberative body, and those deliberations should occur in the light of day and be part of the public record,” Allison said.”

The Consensus Calendar – New Rule for the 116th Congressional Session

The Consensus Calendar is a new rule effective this year for the 116th Congressional Session in the House of Representatives. Referring a bill to the Consensus Calendar removes a legislative step that is designed to give the public an opportunity to inform members of the committee (that discusses the merits of a bill and amends it as needed, or keeps it from moving forward) of concerns about a bill prior to it being sent to the floor for a vote. To date, 9 bills have been referred to the Consensus Calendar, 2 of which are concerning animal rights related bills.

What Happened with the PACT ACT in The House of Representatives

The PACT ACT was Hotlined in The Senate

If the process used in the House of Representatives wasn’t concerning enough, the way the identical bill, S. 479, passed the Senate is also something we should explain. Proposed legislation takes many forms and there are many processes in making a bill law. Bills like the PACT Act, that are not exactly as they seem on the surface, need time and open communication with all types of stakeholders prior to a vote. That did not happen in this instance. This bill was hotlined.

Many media outlets are painting the passing of S. 479 as a unanimous vote, in truth it was not. S. 479 was hotlined out of the Judiciary Committee to the Senate floor on November 5th. At that time there were only one or two Senators present. The PACT ACT was brought forward and passed with no vote because no one knew it was on the floor, and consequently there was no one to oppose the bill. This is the most deceptive way to pass a bill.

We, as the supporters of animal owners and producers of all kinds, need to ask ourselves how a bill with such dangerous language was able to work its way through the process all the way to the President of the United States’ desk in a matter of 2 weeks. Almost completely unnoticed by many in DC.

When will it happen again?

To learn more about the PACT Act CLICK HERE