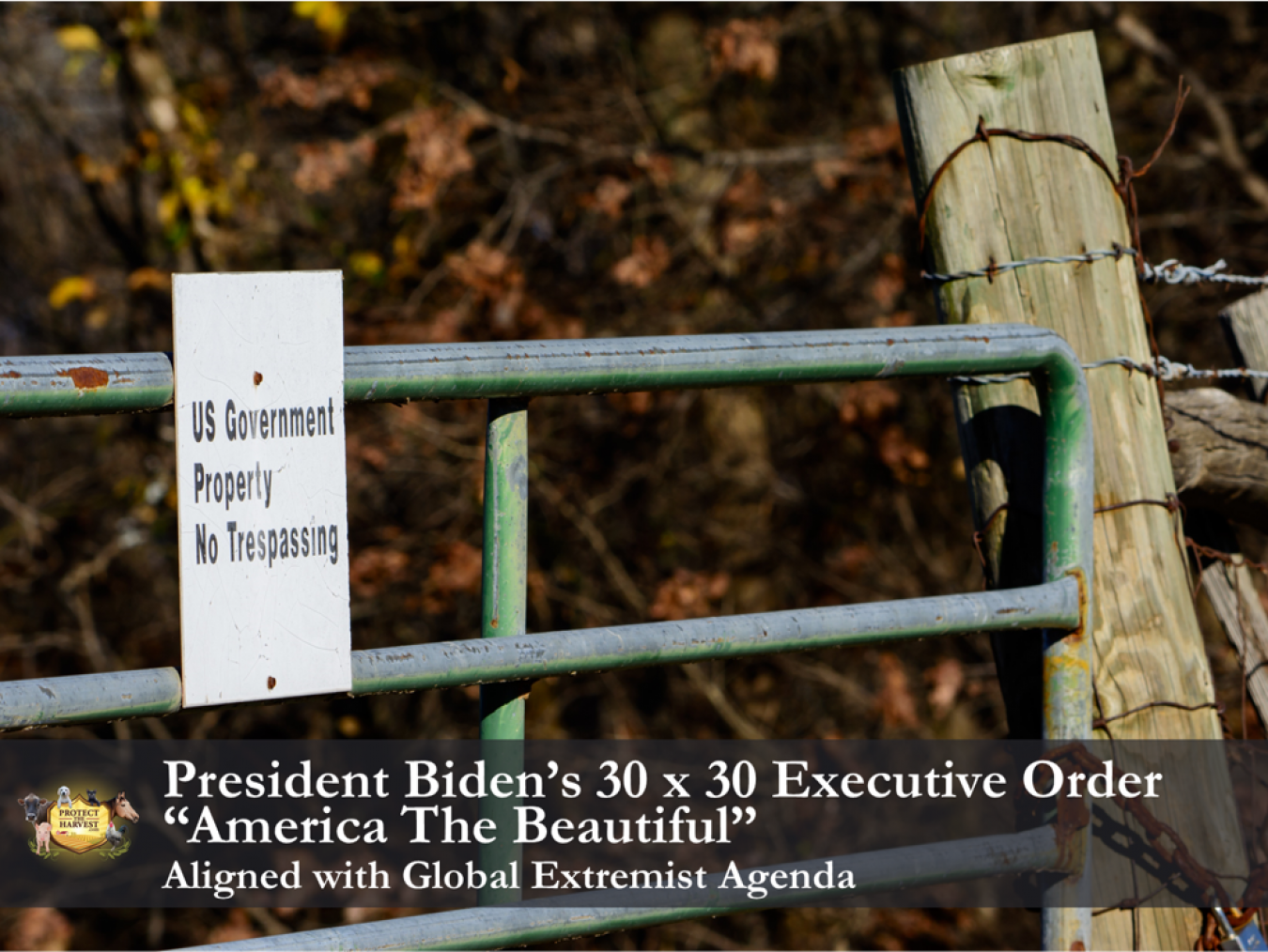 In the midst of a very politically turbulent time for agriculture, tensions are high as farmers, ranchers and rural landowners look to concerning legislative activity. Just seven days after he was sworn in, President Biden signed Executive Order 14008, titled Tackling the Climate Crisis at Home and Abroad. This is also known as the 30 X 30 initiative in reference to the overarching goal to conserve 30% of United States land and water by the year 2030.

Recently the Biden administration released a vague document called the “America the Beautiful” report. This report is, “A preliminary report to the National Climate Task Force recommending a ten-year, locally led campaign to conserve and restore the lands and waters upon which we all depend, and that bind us together as Americans.” This is supposed to go hand-in-hand with the 30 X 30 initiative and provide a layout of how it will be implemented. Not surprising, the report has quoted on page 5 two extremist groups that we have discussed previously, The Nature Conservancy and the Society for Range Management. Page 10 of the report offers the same goals listed as Executive Order 14008 and mentions that, “...the U.S. is well positioned to achieve a 30 percent goal over the next decade.” To track all of the information from lands and waters that have been “conserved” and will be in the future, the government plans to establish an interagency called the American Conservation and Stewardship Atlas. 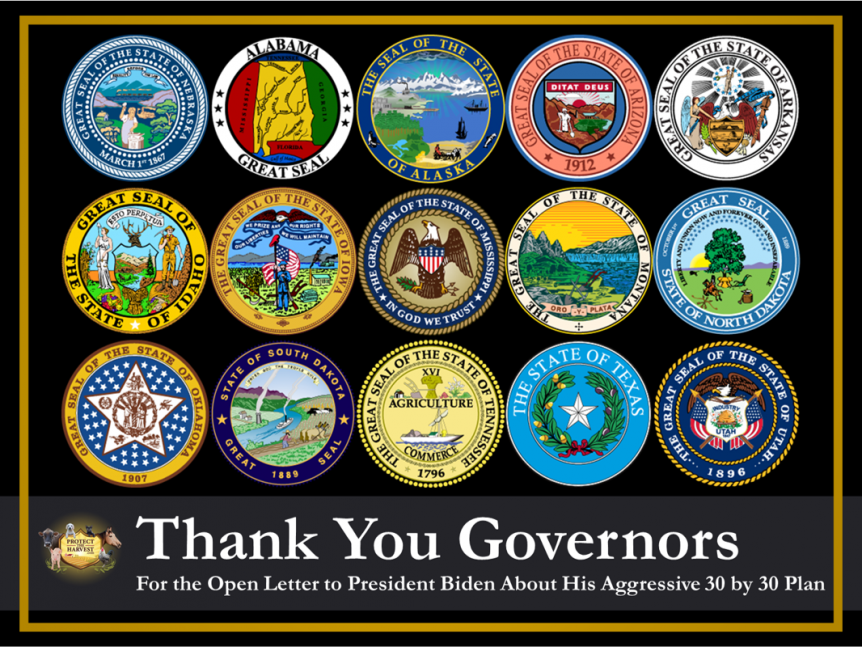 The language used in this order has raised questions from the agriculture community and politicians regarding the constitutionality of such implications. Fifteen governors sent an open letter to the President voicing some of their concerns, especially in light of the many farmers, ranchers, and rural citizens who own large tracts of land. The language of the order implies they will be targeted and is being called a hidden “land grab.”

“Some of us govern western states with massive amounts of lands in the categories mentioned above or other federal designations that should be considered as ‘conserved,’” the governors wrote. “We are deeply concerned about any effort to enlarge the federal estate or further restrict the use of public lands in our states.”

30 X 30 doesn’t seem to just be a bit of ignorance from the Capitol Hill elite; it also seems to have ties to other massive global movements with extremist entities.

While USDA Secretary Tom Vilsack has disputed the notion that the 30 X 30 order is a “land grab,” rural America remains yet unconvinced. Aware that the language of the order doesn’t exclude farmland, opponents have duly noted that a conservation effort this large would undoubtedly have to require either conservation easements or purchasing land from private owners.

Given the percentage of land that is privately owned, especially in certain states where much of that land is used for agrarian purposes, infringing on private land ownership would be inevitable to some degree. This has not been denied by any politicians. However, according to Jewel Bronaugh, Biden’s nominee for Deputy Secretary of Agriculture, “a lot more opportunities to make decisions” are reportedly on the horizon.

To read a letter submitted to the Gina McCarthy, Biden's National Climate Advisor about the America the Beautiful Report from the Western Governors Association click HERE

“This ’30 X 30’ goal has received a great deal of attention in farming and ranching communities across the country,” said Zippy Duvall, president of American Farm Bureau Federation in a letter. “America’s agriculturalists are asking whether their good work will be recognized by the administration. They have voluntarily enrolled more than 140 million acres of private land into federal and non-federal conservation programs – a landmass larger than the size of New York and California combined.”

On a larger level, some of the motives and individuals behind 30 X 30 are concerning in and of themselves. President Biden’s appointee for the Special Presidential Envoy for Climate is John Kerry who will be a notable figure as discussion around this executive order continues. Kerry played a pivotal role in negotiating the 2015 Paris Climate Accord, which has ties to the UN Agenda 2030 and Goal 13.

Beyond his involvement with environmental policy, Kerry also bears endorsements from animal extremists, which is always a red flag. In his 2004 run for the presidency, Kerry was endorsed by Humane USA. Humane USA is a political action committee (PAC) that was formed by multiple animal extremist entities including Farm Sanctuary, ASPCA, and the Humane Society of the United States (HSUS) among others. With the large animal extremist groups backing them, they had no problem donating over $1 million to election campaign funding.

In 2011, Kerry was named a “Humane Advocate” by the Humane Society of the United States (HSUS). He also previously earned a 100% rating on their Humane Scorecard. Additionally, Kerry holds a 91% lifetime score from the League of Conservation Voters. With his track record, notably his work on the Paris Climate Accord, Kerry has been hailed as “one of the world's most effective climate champions” by another extremist group the Environmental Defense Fund.

In addition to his role as Envoy, Kerry is also the Departmental Climate Task Force Co-Chair with Alexandria Ocasio-Cortez. Like Kerry, Ocasio-Cortez is no stranger to the extremist world, and is especially known for her role in the Green New Deal legislation. Her appointment was praised by the vegan extremist media outlet VegNews. The publication praised her again this year when the congresswoman tweeted that she would be going vegetarian for Lent in memory of the vegan extremist Tommy Raskin and encouraged her followers to join her. This was not the first time. Ocasio-Cortez has repeatedly discouraged the consumption of meat and dairy products under the misguided belief that it would have a significant impact on climate change.

Her Green New Deal has been problematic for livestock farmers and ranchers since its introduction.

“…farmers were stunned by another admission by the Congresswoman,” according to one Missouri Farm Bureau article, “One document (which she later retracted, saying it was a “draft”) explains that she watered down her goals for the first 10 years ‘because we aren’t sure that we’ll be able to fully get rid of farting cows and airplanes that fast.’”

And her record with the animal extremist world does not end with farming. In 2019, she responded to a tweet from extremist Yashar Ali regarding an effort to “free” Happy the elephant from the Bronx Zoo saying, “Thanks for bringing Happy’s situation to my attention! The team and I are looking into what we can do,” which earned her a headline on the extremist site Livekindly which is affiliated with PETA.

In addition to the obvious issues the executive order poses it also eerily aligns with other political movements heavily influenced by both animal and environmental extremists. The year 2030 that keeps coming up as the goal for multiple climate change-centric measures is rooted in the United Nation’s Sustainable Development Plan or Agenda 2030. The plan has seventeen global goals of which many are regarding food, agriculture and sustainability.

Agenda 2030, developed in 2015, is the root cause behind much of the governmental climate control legislation in action today. Just a year later the Paris Agreement was signed as another step to ensure the cooperation of nations in implementation. Following with his climate change initiative, President Biden has re-entered the agreement, and as part of that effort has “…organized through his National Climate Task Force, to establish this new 2030 emissions target – known as the ‘nationally determined contribution’ or ‘NDC,’ a formal submission to the United Nations Framework Convention on Climate Change (UNFCCC).”

The aid of non-governmental organizations (NGOs), including HSUS, PETA, and the ASPCA have long been deployed in tandem with the UN to promote propaganda aimed at reducing animal production and consumption, as previously documented by Protect the Harvest. With these initiatives being heavily pushed by the media as a saving grace to climate change, the implications of devastating the food supply were easily slipped past the general public.

In Line with the Green New Deal

Using the 30 X 30 plan to take land out of commission from agricultural production mirrors the implications made by the Green New Deal. While this resolution has been vague in what “should” be done regarding our agricultural system, it implies the need to severely regulate, if not reduce, conventional food production. It uses language like, “eliminate pollution and greenhouse gas emissions from the agricultural sector” and “investing in sustainable farming and land use practices that increase soil health” while utilizing “family farming” though it failed to define the term.

The implications that conventional and large-scale livestock production would be heavily impacted was duly noted. This garnered a lot of media discussion and attention from various animal extremist NGOs. We Animals Media posted an article titled “Green New Deal: A Just Transition for Animals,” discussing how it could be leveraged in tandem of the animal extremist agenda as they push for a totally vegan world.

The increased growth of the agtech sector, including the pushes for urban agriculture, hydroponics, and container farming have made it easy for extremists to point to increased efforts aimed at eliminating the meat sector and large-scale agriculture. This begins with downsizing and cutting back. The movement away from large-scale production and pushing out families and individuals involved was put on display when Senators Cory Booker and Elizabeth Warren introduced the Farm System Reform Act.

A Vox article was very revealing about how this is viewed in light of “fake meat” and food technology:

“There are two wild cards here. One is the rapid rise of plant- and lab-based meats. By 2040, when the Farm System Reform Act is fully implemented, how rapidly have those technologies advanced? How cheap is an Impossible Burger? How tasty is lab-grown pork, or 3D-printed steak?

If a bill like this made animal-based meat more expensive, it might accelerate the transition to other forms of meat. That’s certainly a quiet hope in the animal rights crowd.”

The push away from meat has long been linked to the work being done at the UN. It’s no coincidence that the official “Meatless Monday” website pulls citations directly from them.

Putting All the Pieces Together

A look at the overall picture shows that no one piece of legislation or political action is truly remote when it comes to discussing the environment or food production. It is all connected in a plan that goes all the way to the global level. The plan is quietly moved in each nation with the aid of NGOs in both the animal and environmental extremist camps.

Those in the food and agriculture industries need to be extremely vigilant with what is going on. Take a close look at both the vagueness and wider implications of everything happening in national and local government. Stay up to date from reliable sources such as agriculture advocacy groups and pay close attention to what your representatives and senators are deciding on your behalf.