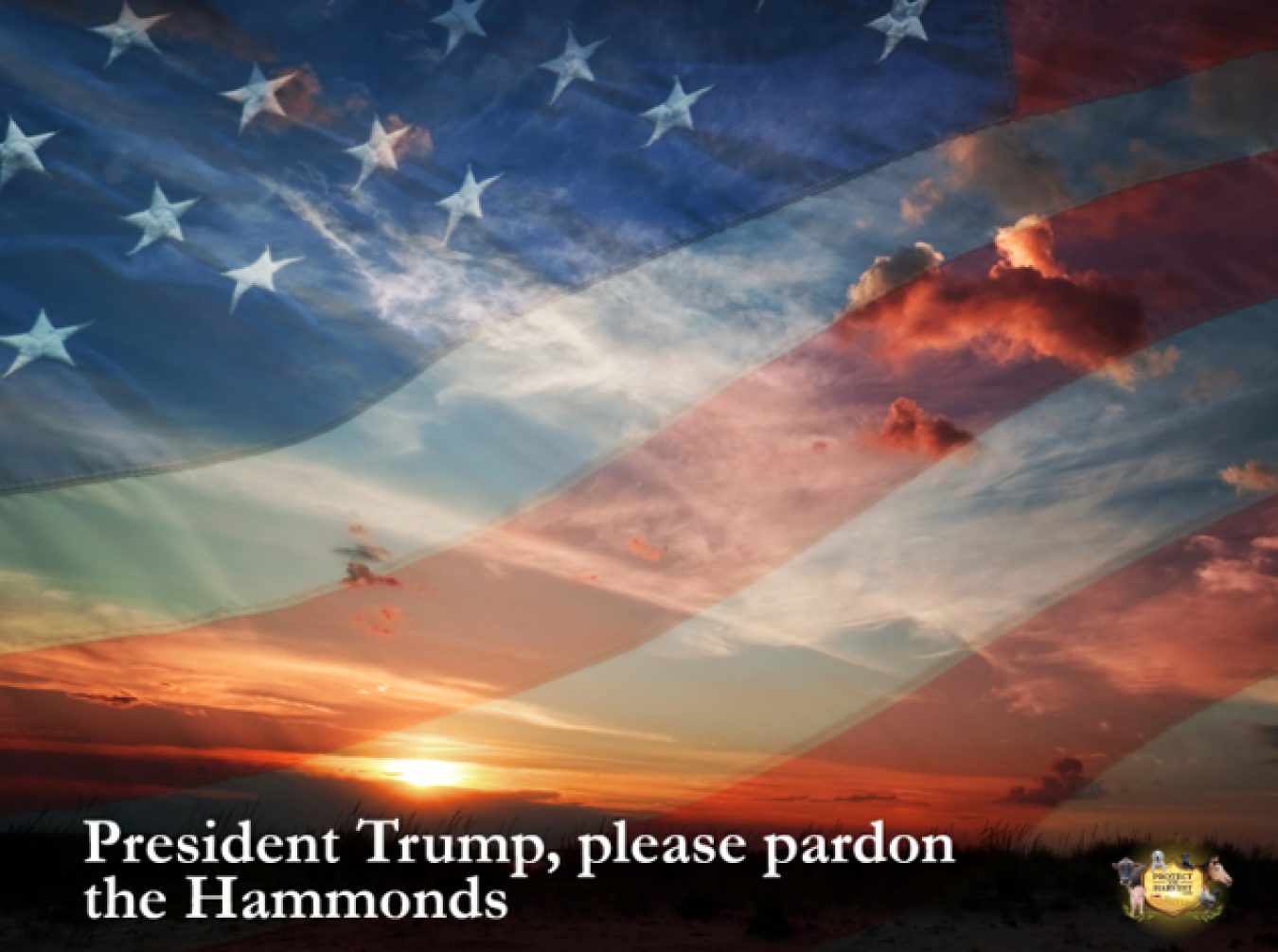 Please help us in sending a message of support to President Trump on behalf of Dwight and Steven Hammond.

We are asking everyone to contact media outlets and to participate in a social outlet blitz. The pardon is currently in the office of the President. He has recently spoken with Congressman Greg Walden about their case.

What is most important to know is that Dwight and Steven Hammond never should have been tried under the Antiterrorism and Effective Death Penalty Act of 1996.

The media blitz is planned to start this weekend and follow through to the next week. You can help show your support by contacting the media and by participating in our Twitter Storm and Facebook blasts.

To Participate in our Social Media Blitz:

To submit a news tip to CNN Headline News, text CNN space and your tip to 772937. cnn.feedback@cnn.com
community@cnn.com

Please flood Congressman Walden’s social outlets with messages of support for the Hammonds:

Information about the Hammond case, provided by Linsay Tyler:

In the present case, in 2001, with BLM permission, Steve Hammond started a prescribed burn on their private land that accidentally spilled onto 137 acres of adjoining federal land. The BLM never cited the Hammonds for that fire.

In 2006, during a violent thunderstorm, lightning struck federal land near the Hammond’s home, barns and stack yards of winter feed. The Hammonds started an emergency backfire on their private land to protect their home and buildings but which burned one acre of adjoining federal land before it could be contained. The BLM was notified of the burned acre of land. The backfire not only saved the Hammond’s home and barns but ultimately their grazing lands potentially protecting thousands of acres of federal land from the ravages of the wind-driven wildfire.

The BLM pursued criminal charges for the fire against Dwight and Steve in state court. District Attorney Tim Colahan reviewed the case and dismissed all charges against the Hammonds.

In 2010, before the statute of limitations had run on the 2001 fire, the BLM brought the Hammonds into federal court, indicting them on 9 charges relating to both fires. Rather than charging Dwight and Steve under the BLM’s own land-use statutes, prosecutors instead maliciously charged them as domestic “terrorists” under the Antiterrorism Act of 1996. This time the BLM succeeded in obtaining a conviction against Dwight Hammond, Jr., now 78, and Steven D. Hammond, 50. However, the government did offer to drop all charges if the Hammonds would simply sign over two-thirds of their ranch to the federal government.

Significantly, the Interior Department avoided bringing charges under their own statutes which specifically provide an exception for crimes attaching to fires started by ranchers who own grazing allotments in certain circumstances:

“This section shall not apply in the case of a fire set by an allottee in the reasonable exercise of his property rights in the allotment,” 18U.S.C. § 1855.

Federal District Court Judge Michael Hogan stated at sentencing, “I will impose a sentence that I believe is defensible under the law, but also one that is defensible to my conscience.” Hogan specifically found,

“It would be cruel and unusual punishment for this crime to give them the mandatory minimum of five years.”

Steven was sentenced to one year; Dwight, 90 days, which they served. He also sentenced both Hammonds to three years of post-prison supervision and required them to surrender their firearms. The judge also allowed the men to stagger their sentences in order to keep operating their ranch.

Tragically, council for the Hammonds failed to raise critical defenses in pleadings, and pressured the Hammonds to take a midnight plea deal to a partial verdict. The Hammonds understood the plea to mean that the case was over once and for all. They did not realize that in signing the agreement they had waived all their rights to appeal but that the federal government’s right of appeal was retained.

Once the ink was dry on the plea agreement the government prepared to appeal to the Ninth Circuit Court of Appeals. In a separate but related civil case, the Hammonds were fined $400,000. The Hammonds signed this agreement under duress, giving the BLM the first right-of-refusal should the Hammonds be forced to sell their ranch.

In 2015, the DOJ and DOI appealed to the Ninth Circuit Court of Appeals and the Court ordered the Hammonds to be re-sentenced for the full five-year term beginning January 4, 2016. Dwight and Steve are currently incarcerated in federal prison in Southern California.

The Rule of Law:

Impositions of arbitrary and capricious rules and regulations singling out one rancher is inconsistent with the rule of law. The government clearly engaged in selective criminal and civil prosecutions of the Hammonds as terrorists for accidental fires when there is ample evidence the BLM and USFWS had for decades been attempting to drive the Hammonds out of business and off the land as they had with numerous other ranchers in the ever expanding Mahler Wildlife Refuge.

The punitive double imprisonment of the Hammonds is especially troubling in light of multiple documented cases of Oregon BLM employees starting controlled burns or backfires which “accidentally” spread to burn thousands of acres of both federal and private land and structures. Those employees remain unpunished and property owners uncompensated for lost property.

For the rule of law to mean anything in this country it must be applied equally to everyone—not selectively to private citizens for ulterior motives. Federal employees receive immunity for the very same act for which the Hammonds were charged criminally and sent to prison in a manner even the trial judge found to be egregious.

Even more troubling is the long history in the Hammond case, and others, of federal administrative and prosecutorial powers being weaponized in what appears to be a concerted effort by the BLM, aided by the Department of Justice, to take property without compensation and extort exorbitant fines from law abiding ranchers. While government abuse of power is not uncommon, it is uncommon for a 78-year old man and his son, both of whom have exemplary records, to be sent to prison for as domestic terrorists for an accidental fire.

Back History of Harassment:

For decades agencies of the Department of Interior, namely the Bureau of Land Management (BLM) and U.S. Fish and Wildlife Service (USFWS), have deployed their administrative powers to punitively regulate and maliciously prosecute the Hammond family of Oregon in a thinly veiled attempt to drive them off their ranch, their historic grazing allotments and vested water rights.

For 20 years, the Hammonds fought to be able to trail cattle on historic stock driveways through USFWS land using historical records to establish their right to trail their cattle. During that time, government records document repeated efforts by the USFWS and BLM to prevent the Hammonds from using their historic rights. Between 1994 to 2006, the Hammonds were arbitrarily stripped of three BLM grazing permits and one Malheur National Wildlife Refuge grazing permit, gutting the economic viability of their ranching operation. The grazing permits were attached to the Hammond’s statutorily protected vested stock water rights and grazing preferences.

History of Fires in the American West:

The 2014 Bully fire in Shasta county …12,000 acres burned, homes & one death caused Alexander Smoke driving on dry grass to his illegal pot grow… skips bail for 2 years then gets only 5 years with parole at 2 1/2.

The 2014 Rim fire near Yosemite …200,000 acres burned… including federal land … one tanker pilot died, 11 injuries… caused by hunters illegal campfire which he lied about twice before admitting to it.

The Long Draw fire become Oregon’s biggest blaze since 1865. The team managing the fire said it blazed across 515,000 acres.

Transient with prior offenses sentenced to 3 years but paroled after 18 months.

Hammonds had permission for control burn that escaped & burned only 137 acres of sagebrush & later 1 acre of sagebrush on a backfire …no deaths or structures burned.

Tried twice, the second time as Terrorists. Dwight and Steven Hammond received five years in a federal penitentiary & $400,000 fine. In addition, they are required to assign the BLM first right of refusal to their land.

Less acres burned, no deaths or structures lost on permitted fires, yet longest sentences & highest fines that there supposed to be exempt from.