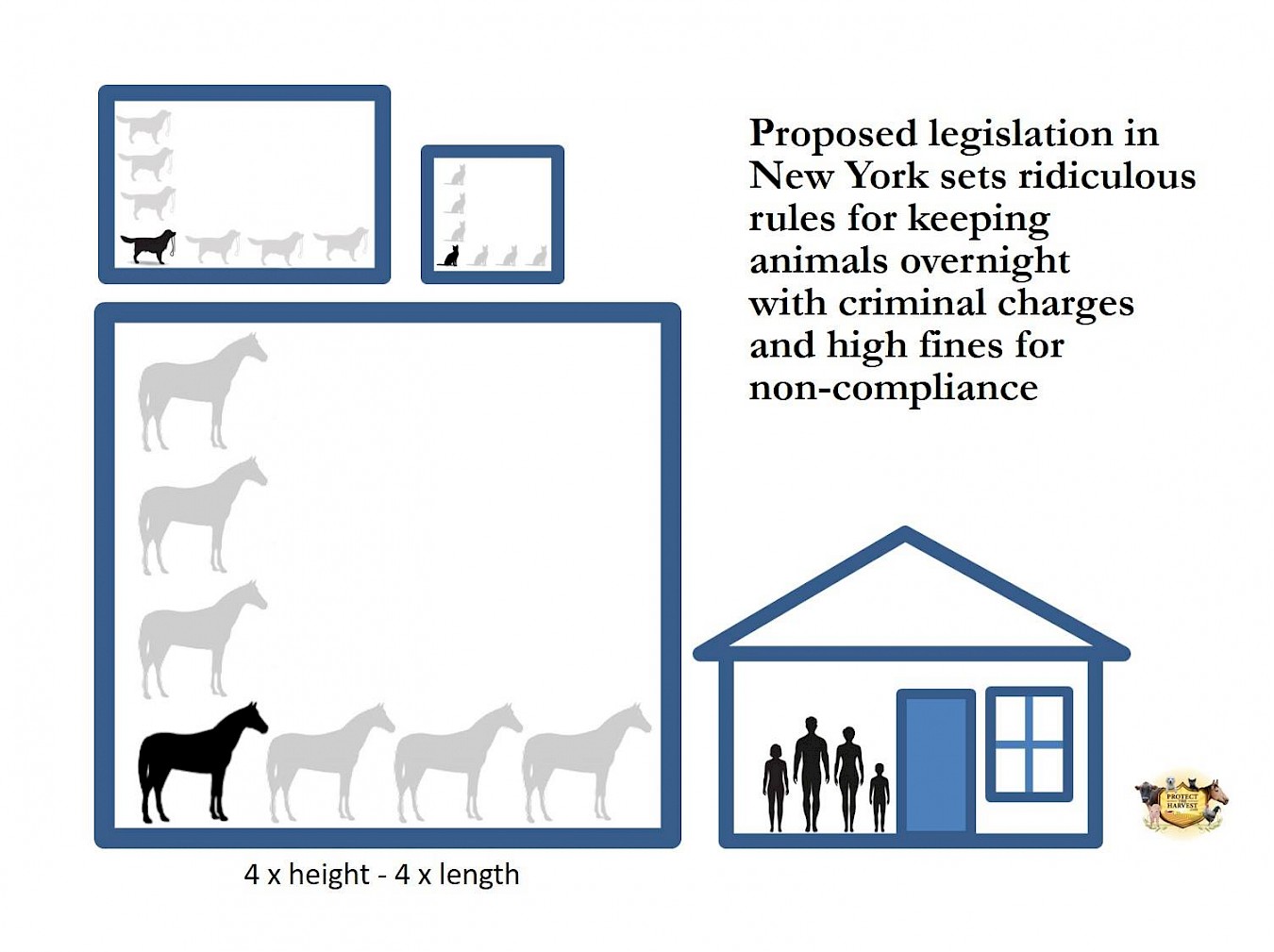 On 1/29/2019, Protect the Harvest published an article to educate the public about New York Legislation A830 and how it would affect animal owners in the state of New York. This post reached a very large audience. Information about A830 was also published by various other news and animal interest organizations.

At the time of our original post, the language in A830 is as follows.
THE PEOPLE OF THE STATE OF NEW YORK, REPRESENTED IN SENATE AND ASSEM- BLY, DO ENACT AS FOLLOWS: Section 1. The agriculture and markets law is amended by adding a new section 353-g to read as follows: § 353-G. TETHERING, RESTRAINING, CAGING OR PENNING OF DOGS OR ANIMALS. 1. IT SHALL BE UNLAWFUL TO TIE, TETHER, RESTRAIN, CAGE OR PEN A WORKING OR NON-WORKING DOG OR ANIMAL, BETWEEN THE HOURS OF 7 P.M. TO 6 A.M.

Current form of A830: https://www.nysenate.gov/legislation/bills/2019/A830
Current Language (as of 2/4/2019)
THE PEOPLE OF THE STATE OF NEW YORK, REPRESENTED IN SENATE AND ASSEM- BLY, DO ENACT AS FOLLOWS: Section 1. The agriculture and markets law is amended by adding a new section 353-g to read as follows: § 353-G. TETHERING, RESTRAINING, CAGING OR PENNING OF DOGS. 1. IT SHALL BE UNLAWFUL TO TIE, TETHER, RESTRAIN, CAGE OR PEN A WORKING OR NON-WORKING DOG OUTDOORS, BETWEEN THE HOURS OF 7 P.M. TO 6 A.M.

Despite this language change, the original intent of the bill and its original language are still of concern and should not be taken lightly. Linda Rosenthal, a past member of the Humane Society Legislation Fund National Humane Legislators Council, introduced this bill. The proposed legislation has nothing to do with what animals actually need. Animal welfare was not taken into consideration in the slightest. This is just another ploy by Animal Rights groups to undermine animal ownership, this time in New York. Division of the animal owning public is a common tactic among AR groups, as is opening a door for future legislation.

If passed, it could be dogs today, all tomorrow.

There is a proposed bill in New York state that will make it illegal to;

“…tie, tether, restrain, cage or pen a working or non-working animal between the hours of 7 p.m. to 6 a.m.”

A830, introduced to the New York State Assembly is a bill that will negatively impact its resident animal owners. If you read the summary of the bill, it may sound innocent, but the regulations will have a large impact on pet owners, working animals, animal agriculture, pet breeding, and veterinarians. Linda Rosenthal, who is a past member of the Humane Society Legislation Fund National Humane Legislators Council, introduced this bill. We believe that the animal rights agenda is behind this proposed bill and the public needs to be informed.

The language in A830 is vague and can be interpreted differently based on a person’s background or training. For example, when describing what will be allowed, the bill states:

The bill does not contain a description of what is considered inhumane. There is also no information in the bill regarding veterinary or other animal welfare protocols.

Often horses and cattle are kept in stables for long periods if they are recovering from an ailment. Dogs and cats and other animals in veterinary hospitals are kept in cages, kennels and pens or stalls when they are being treated. Does New York plan to arrest all veterinarians for inhumane treatment?

What about all of the dogs kept inside a crate overnight in their home? Are there plans to send inspectors into pet owner’s homes and then arrest them for putting a puppy in a crate during house training? If a dog is tethered outside for 30 minutes in the evening to relieve itself, does that warrant a violation? The language in this bill is so ambiguous and void of common sense in regard to animal husbandry that it is embarrassing.

The language in the legislation does allow for a variance in compliance, but the requirements are ridiculous. The tether, pen, or cage must be at least 4 times the height and length of said animal. A medium sized dog is 22 inches at the shoulder. A crate 4 times the height of a medium sized dog would be over 7 feet tall. The average horse is 5 feet tall at the shoulder and about 7 feet long so its “pen” would need to be over 20 feet high and 28 feet long. For reference, the average size of horse stalls at most stables range from 10 feet by 10 feet to 12 feet by 12 feet, and the height of average pens are 5 to 6 feet high.

“Escaping Harm” Actually Puts Animals at Risk of Harm
In addition to the ridiculous pen size requirements, the legislation also reads that the pen must permit the animal to “escape harm”. It is not inhumane to keep a pet or livestock animal in an enclosure overnight to keep it safe. However, in this bill, a pet or any animal would need a way to escape that enclosure which defeats the purpose.

How would one go about creating a safe environment for a pet, horse, cow, or other livestock animal, etc. while also allowing them to escape? How can a dog owner put their dog in a pen or crate for the night and make sure they have an escape route that they will only use during an emergency? Animals are not people; they do not understand the concept of emergency exits. When putting a horse in a stable, the last thing you want them to do is to escape and get injured or cause injury to someone else.

If this bill is voted into law, the fines for violations are equally as ridiculous as the regulations. While the first violation would be considered a misdemeanor, the minimum jail sentence is 2 days and up to 6 months. Also required would be community service, a minimum of 48 hours and a maximum of 120 hours. The fine for the first offense is $200 to $1,000. Upon the second offense, the jail time goes up to 10 days, and the fine goes up to $1,000 to $2,000. A third offense will be considered a felony.

To put this into context, if you live in New York State and keep your puppy in a standard crate, you will be violating the law and subject to a fine and jail time and will be at risk of committing a felony if you continue to crate your puppy overnight.

If you live in New York State and keep your horse in a stable overnight in a standard horse stall, you will also be violating the law. To avoid further fines, jail time and eventually felony charges you will have to find another way to keep your horse.

Horses with a Noble Purpose

Since the bill language covers dogs and all animals working and non-working, this would include carriage horses, mounted police horses, and horses used by therapeutic riding centers. Horses used in these areas are some of the best cared for animals anywhere. Their handlers and partners know they serve a noble cause. A830, through its nonsensical language and obvious lack of practical application to animal welfare and animal husbandry, would make it very difficult for these organizations to continue.

It is interesting to note that these requirements are to be in effect during the hours of 7 p.m. and 6 a.m. This coincides with the same hours that working carriage horses are kept in stalls overnight.

Carriage horses thrive working as they were bred to do, and they receive excellent care. However, animal rights ideologues have the misguided belief that working horses are miserable and are treated like slaves. They would prefer to see these horses turned out into the wild where they will not receive care, including ready access to food and water. They have no true concern for the welfare of the horses, their only concern is their belief that animals should not be in human care.

For more information about the carriage horses in New York City and the dirty politics involved, we highly recommend the movie, “The Last Horsemen of New York”. Link: https://www.amazon.com/Last-Horsemen-New-York/dp/B07CL7TWWR

What about the great service mounted police horses offer to the general public in New York City? Below are a few excerpts from a 2017 CBS interview with the NYPD Mounted Unit:

“We knew we had to act fast and get there as quickly as possible,” O’Leary said.
“If we weren’t there on horseback, the next police officer might have been a few minutes away because they have to come in on a car,” Tomeo said.
The mounted unit is crucial to counter-terrorism. They were among the first on scene at the Times Square car bomb in 2010. During protests like Occupy Wall Street, mounted officers have a broader view for crowd control.
“There’s a lot of time we have a thousand, 1,500 people street fairs, a concert, if something’s going on in the middle of the crowd and we need to get into that crowd to get somebody out or to bring other police officers in we can open that crowd up within a short amount of time without causing anyone to get hurt,” Deputy Commander Barry Gelbman said.

A830 disregards the partnership the NYPD officers have with their equine partners as compliance would make keeping police horses difficult to impossible.

The unrealistic requirements outlined in A830 would also have a negative impact on therapy horses. New York State hosts close to 35 therapy centers that utilize horses in their programs. These centers serve both children and adults with disabilities. Often the adults are armed service veterans. The importance of equine therapy to an individual with physical, cognitive, and emotional challenges has been well documented in many medical journals. These horses receive excellent care and help serve many communities across the state.

Link to the American Hippotherapy Association’s website for info on horse-assisted therapy: https://americanhippotherapyassociation.org/what-is-hippotherapy/

Find a Therapy Center near you: https://www.pathintl.org/path-intl-centers/find-center

What Can I Do?

A bill like this is the gateway to eliminate pet ownership, horse ownership, and animal agriculture. It is also a gateway to close down the carriage horse industry, mounted police departments, therapy animals, pet breeding, and all other animal industries that follow common sense animal husbandry practices and scientific animal welfare standards. If you own pets or livestock and live in New York state and want to continue to own pets or livestock, your state representatives need to hear from you. If you are not a resident but have friends or family that reside in New York, please share this information with them.

If you are unsure who your representatives are, you can find them here: https://www.nysenate.gov/registration/nojs/form/start/find-my-senator

You can read the full text of the bill here: https://www.nysenate.gov/legislation/bills/2019/A830?intent=oppose