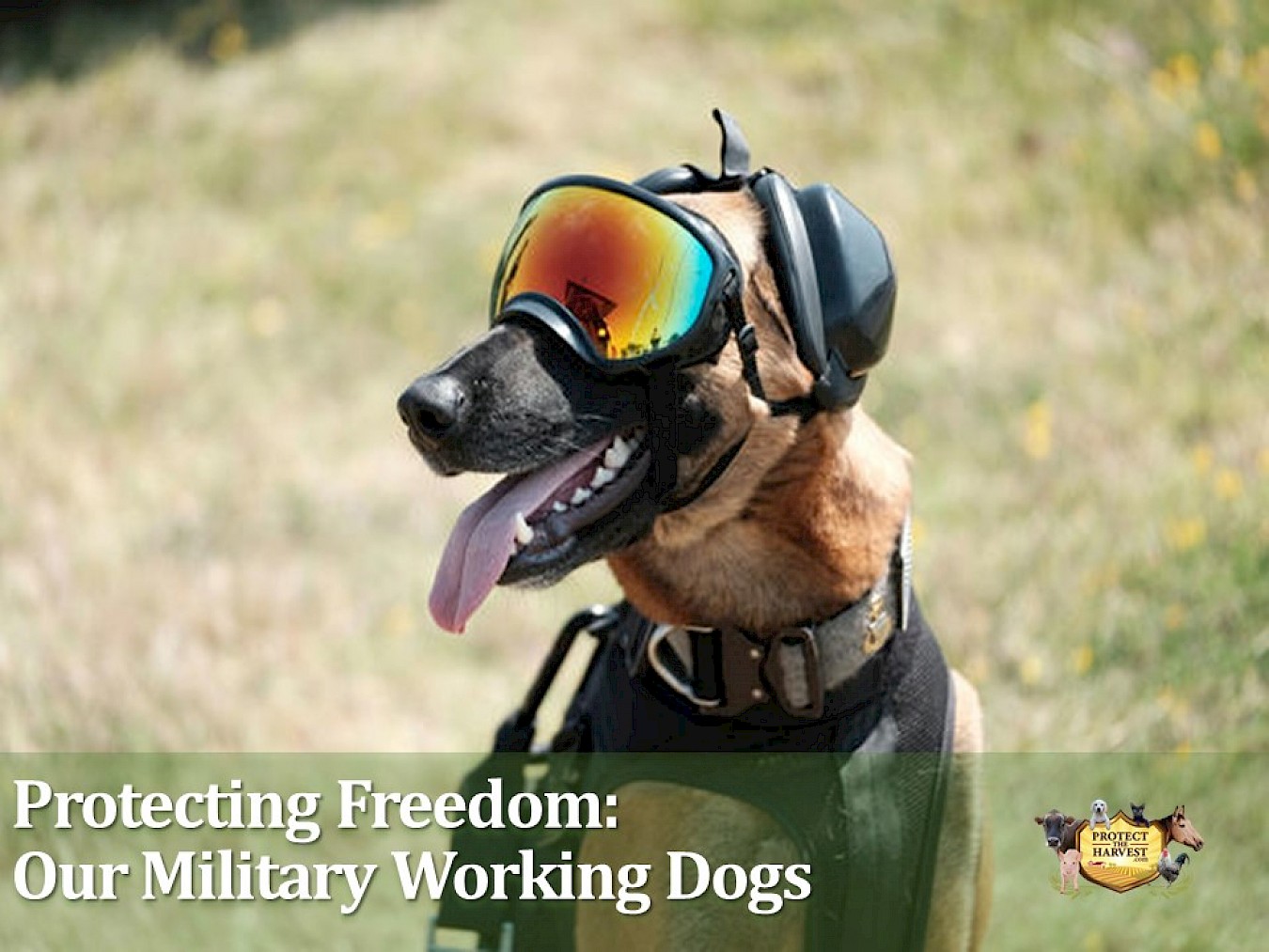 Recently, a valued canine member of the U.S. military played a crucial role in the take down of ISIS leader, Abu Bakr al-Baghdadi. The Belgian Malinois named Conan chased him into a tunnel where he ultimately committed suicide after realizing escape was not an option. Military Working Dogs, or MWDs, as they are commonly known, have proven their usefulness since World War ll and are an important part of today’s military.
Military Working Dogs, like other purebred dogs, are the result of specialized breeding for traits intended to produce, preserve or remove specific physical characteristics, mental traits, health conditions, skills and ability to perform specific tasks. The breeding of dogs to enforce a skill that is prevalent in a breed has been used for centuries and is a great benefit as it can help an entire society. Examples of this are the MWD, police K9’s, hunting dogs, herding dogs, and Seeing Eye dogs. Protect The Harvest believes that we need to protect the right to breed, train and use working dogs.

Dogs Are an Invaluable Asset That Cannot Be Substituted or Replaced
With the dog’s ability to hear and smell five to ten times more acutely than a human, they prove their value to our military daily. MWDs serve many different purposes and are specialized in the jobs they perform. Some are used to search for narcotics or explosives, but never both. The reason is simple. If a dog is trained to sniff out both, when he alerts, the handler must know in a split second what the dog is alerting to, as an incorrect guess by the human could prove dangerous. They are also trained as combat trackers or patrol dogs, required to conduct Secret Service missions, and for health and welfare inspections.
While animal rights activists complain that we are enslaving these dogs by making them work, there is no substitution for a MWD. There are research projects underway to create “artificial noses,” a machine that could replace the single purpose dog. However, their development is a long way down the road. These “artificial noses” would use chips created from olfactory cells to sniff out various substances, but at this point in time, the cells must be replaced after one use.
The one thing a machine can never replace is the dog’s immense loyalty and desire to please. In 2004 an article from Defense.gov archives, Army Colonel David Rolfe, Ret., former director of the Defense Department's Military Working Dog Program, stated it best, “A machine doesn’t care if it finds something, but a dog wants to please its handler. A dog will go looking for something on its own where a machine won’t. The bottom line is that dogs have a heart- something that makes them an invaluable asset to our fighting forces.”

Common Breeds Used in Military Working Dog Programs
The standard breeds used for U.S. Military Working Dogs are German and Dutch Shepherds and Belgian Malinois. These breeds are chosen because they are smart, loyal, athletic and can be aggressive if the situation dictates a need. These breed standards are naturally uniform in type and well suited for those tasks.
For other specialized roles, particularly detector dogs, other breeds are used. For example, retrievers (Labrador, Golden and Chesapeake Bay) are the preferred breeds for One-Odor Detector Dogs.

Working Like a Dog: MWD Jobs
Single Purpose Dogs
Single purpose dogs are very specialized, often to a singular type of scent such as sniffing out just narcotics or just explosives; or in the case of combat tracking dogs, just humans. These single purpose dogs are often sporting breeds like the retrievers. Their exceptional sense of smell and the lack of likely combat makes these breeds well suited. Many dogs are naturally protective of their handlers, but protection is not usually part of their job.
The single-purpose dogs play important roles in military base security, drug task forces, search and rescue, and also can be trained as service animals for the military troops recovering at military hospitals. Their abilities are invaluable in saving the lives of lost troops, preventing drug distribution, and protecting the troops from ambushes or explosive devices.
Dual-Purpose Dogs
Dual-purpose dogs are trained to do both patrol work (protection, deter aggression) and detection work, along with basic scouting. Scout dogs are trained to track a human scent through the air. Dual-purpose dogs are the most common type of dogs procured for the Department of Defense. They have a variety of jobs, including patrolling and protection, narcotics or explosive detection, and assisting in military operations.
Dual-purposed MWD’s are usually breeds like German or Dutch Shepherd or Belgian Malinois.
Multi-purpose Dogs
Multi-purpose dogs are used by Special Ops personnel. In addition to protection and detection, MPC (multi-purpose canines) are used on missions that may include parachuting and rappel operations. They are outfitted with the necessary gear including waterproof tactical vests and night-vision or infrared cameras so their handlers can see what they’re seeing as they work from a distance. These dogs work off leash and are highly trained.
MPC’s tend to be Malinois as they’re a little smaller than the German or Dutch shepherd, making it easier to parachute or rappel down cliffs with them.

Procurement and Training
85% of Dogs Trained at Lackland Are Provided by Commercial Breeders
The Military Working Dog Breeding Program at Lackland provides working dogs to every service branch. However, that breeding program cannot realistically provide enough dogs for the entire MWD program. The rest of the dogs come from high quality, commercial breeders contracted by the military, who breed for specific desired traits. Approximately 85% of the dogs trained at Lackland are procured from these selected commercial breeders.
Training- Puppy Development Specialists
There are puppy development specialists who work with carefully selected puppies from birth until they begin their training at around 6-7 months of age. They work to develop basic social skills and expose them to many different environments. Lackland’s 120-day training program teaches the dogs basic obedience as well as more advanced skills like combat and how to sniff for specific substances. The initial training involves positive rewards-generally a ball or a Kong toy. Once the dogs receive their initial training, members of the 37th Security Forces teach the dogs and their handlers to work as a team.
What Happens to Dogs That Don’t Pass Muster
The dogs must meet the rigorous standards expected by the military (about 50% of the dogs do not make it out of “boot camp”). For those dogs who are unable to meet the needs of the military, according to Title 10 US Code 2583, adoption priority is first given to civilian law enforcement agencies (training for police K9s), then their prior handlers, and finally to the general public after first passing obedience testing.

Breeding Bans Threaten Procurement of Purpose-Bred Dogs
Animal rights activists believe that bringing new, purpose-bred dogs into existence is unethical and a form of slavery. They cite dogs in shelters as the reason there should not be dog breeding of any kind.
Purpose-bred dogs perform specific jobs, ranging from defending our military, to working as a service animal to a person with disabilities, having the inborn qualities needed to succeed. Restricting breeding of these working dogs cripples not only the military but infringes on our rights to choose a dog that is bred for specific traits, like hunting dogs, herding dogs, livestock guard dogs and even service dogs such as Seeing Eye and Canine Companions for Independence. This is concerning as pushing breeding bans and other overreaching legislation are some of the ways animal rights groups are working to push law-abiding dog breeders out of business.
Recently, in California, New Jersey and New York, there have been bans instituted on selling of purebred animals in pet stores. Many other municipalities are proposing similar bans citing the “Adopt, Don’t Shop” narrative used by animal rights groups. This effectively prohibits the sale of purebred animals to pet stores for resale, only allowing the stores to sell shelter animals. This is problematic in many ways. Licensed, high quality breeders keep detailed records, showing the dogs are free from disease, genetic abnormalities or other problems that would keep them from being assets to the military and law enforcement. Pet stores are licensed and regulated sources of pets, while shelters and rescues are not held to the same standards. In many parts of the country, shelters are known to import pets, causing increased risk of infectious disease to the dog population.
Freedom to choose a pet from a breeder or a shelter allows them to make the right choice of pet for their lifestyle and needs, including purebred dogs from commercial breeders. Limiting pet stores to sourcing pets only from shelters, rescues, or pounds, limits choice.

Protect The Harvest Supports Your Right to Choose
Protect The Harvest believes in an owner’s freedom to choose a type and source of pet that suits their needs and situation, whether it’s a purebred dog from a breeder or a dog from a shelter. Animal rights groups like PETA, believe that breeding for sale is a “greedy and callous business”. These groups are doing everything they can to work towards eliminating breeding good, purpose-bred animals. We believe that it is the right of individuals to purchase an animal based on their needs, and to uphold the rights of breeders to breed for specific traits. We work to protect those rights through educating and informing the public about legislation that may affect you as an owner or breeder.
We recommend staying current with issues in your state regarding canine legislation issues by following the AKC Government Relations Department. Click Here
You can also sign up for AKC Legislative Alerts to see what legislation is pending in your area. https://www.akc.org/legislative-alerts/