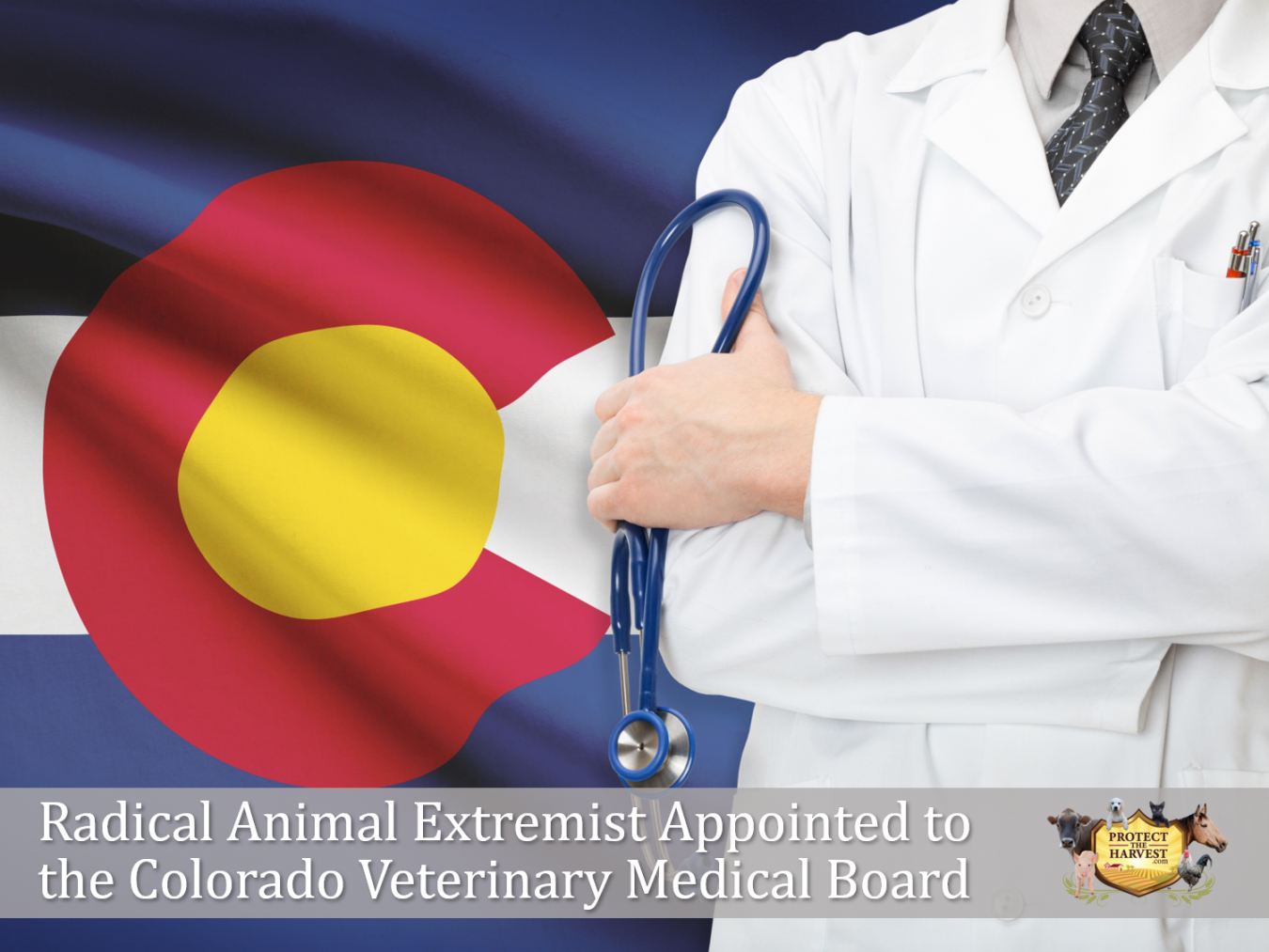 RADICAL ANIMAL EXTREMIST APPOINTED TO THE COLORADO VETERINARY MEDICAL BOARD

The Colorado Veterinary Medical Board consists of five veterinarians and two public positions held by those outside the veterinary profession. The board activities include licensing veterinarians, investigating complaints about licensed and unlicensed practice of veterinary medicine, disciplining violators of the law and/or the board’s rules, as well as making, amending, and adopting reasonable rules and regulations that govern the conduct of veterinarians. It would seem to reason that this decision is to maintain balance and provide outside input when the board is making decisions that impact animal owners or the public. Unfortunately, the latest appointment of Ellen Kessler to the CVMA board by Colorado Governor Jared Polis seems to fly in the face of that sort of logic since she has her own agenda of promoting veganism and animal rights.
There is no question about Kessler’s animal extremist ideology. Her viewpoints are front and center on her social outlets. Her Facebook profile cover image says “Vegan” across the top and her profile says, (Vegan AF) below her name. She’s also a self-proclaimed “Vegan Animal Rights Activist” on her LinkedIn profile. She is greatly involved with a vegan group that “rescues” farm animals called “Luvin Arms”. Incidentally, this is the same group that hosted Colorado’s First Gentleman, Marlon Reis, the vegan animal extremist husband of Colorado Governor, Jared Polis.

Why Coloradans Should be Concerned
Appointing a radical animal rights activist should concern any and all animal owners in the state. The main goal of animal extremist ideology is to not only eliminate animal agriculture but to end animal ownership all together. How will she be able to advise the Colorado Veterinary Medical Board with this extreme ideology? According to the online publication The Fence Post, Terry Fankhauser the executive vice president of the Colorado Cattlemen’s Association has the same concerns. He shares: “The question is not about her dietary choices, I don’t think anyone is judging that, the question is whether she will be able to serve with the level of responsibility necessary and in an objective way, or will her personal feelings, personal beliefs, and objections get in the way of that. That’s a question for every person who serves on a board, regardless of their background or lunch order.”

Colorado Has a Rich Agricultural Identity
Colorado has always had a rich agricultural industry, even before it joined the Union in 1876. Now, nearly half of the state’s 66 million acres are dedicated just to farms and ranches. The agricultural sector contributes more than $40 billion to the state’s economy each year and provides more than 173,000 jobs. More specifically, cattle and calves, corn, wheat, hay and dairy dominate the state’s agricultural commodities. For this reason, we are extremely surprised that the Governor would appoint someone with such a clear anti-animal agriculture agenda. Kessler is open about her opinions and her role on the veterinary medical board could lead to issues within the veterinary community as it pertains to large animal veterinarians.

Veterinarians Play a Vital Role in Animal Health on Farms and Ranches
It should come as no surprise that veterinarians play a vital role in the health of animals on farms and ranches. They provide preventive medical care for livestock and diagnose and treat illnesses that could impact the state’s economy. They prescribe important medication, perform surgical procedures, and advise animal owners on best practices for individual animals and for herd health. As fewer veterinary students pursue large animal practice, it places current large animal and food animal veterinarians in invaluable roles. The state’s veterinary medical board knows all of this and as such needs to be guided by people with the best interest of animals and humans in mind. We do not believe Ellen Kessler fits that criteria. Her radical views could be massively damaging to the state’s important animal agricultural sector.

We Are Not the Only Ones Concerned
Kessler’s appointment to the Colorado VMB is not only worrisome to us, there is widespread concern throughout the Colorado agricultural community and beyond. In fact, the online publication, “The Fence Post”, started a Change.org petition to urge Gov. Polis to retract his appointment. They’ve also written about their concerns in an article that we referenced above. The Colorado Livestock Association (CLA) has also submitted a letter to Colorado State Auditor Diane Ray, Governor Polis, Press Secretary Conor Cahill, Colorado Agriculture Commissioner Kate Greenberg, and members of the House and Senate Agriculture Committees. In all, the CLA is asking Gov. Polis to rescind his appointment of Kessler.

Bottom Line: Remain Vigilant to Your State’s Advisors
This appointment could have happened in any state. We urge our followers to remain vigilant to roles like these that could be open to animal extremist influence. Radical activists, like Kessler, are seeking positions in every animal-related sector. We do hope that the Colorado Veterinary Medical Board reconsiders this appointment and protects animal owners in the state by doing so.