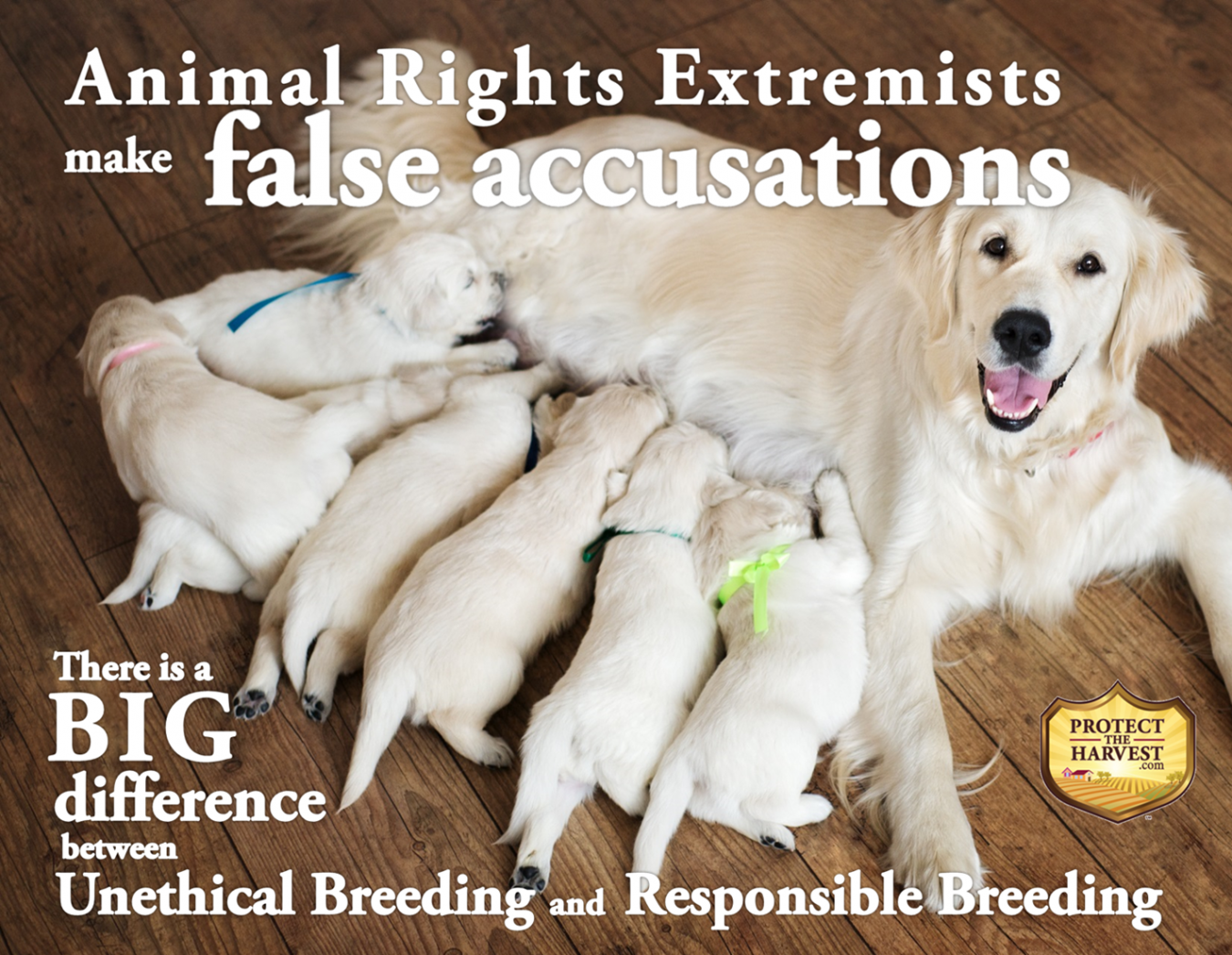 There is a big difference between responsible breeding and unethical breeding. According to the Michigan State Animal Legal and Historical Center, “Currently, no current state statute utilizes the phrase “puppy mill” in its text.” The phrase “Puppy Mill” was used in 1984 by the Minnesota Humane Society. Since then, the HSUS and other animal rights extremist groups have morphed the term to include all breeders. People who genuinely care about animal welfare do not use bullying tactics to stop thoughtful discussions nor do they attempt to mislead the general public about animal law. Describing the activities of people who raise puppies with derogatory terms like "puppy mill" is nothing more than being a bully. The definition is blurred by animal rights activists to confuse the public. Responsible breeders as well as Protect The Harvest, have been falsely accused. We want to advance the law and policy about animals. We support responsible animal ownership and breeding with measures that are scientifically sound.

Unethical breeders give little to no concern about the welfare of animals. They breed dogs without considering the genetic traits they pass on to their offspring. They do not provide proper medical care or adequate, clean, and safe housing. There is absolutely no comparison between unethical breeders and a dog breeding facility that is run by a responsible breeder.

A responsible breeder demonstrates extensive knowledge and has years of experience with the breed of dog they represent. A responsible breeder pays attention to the breed’s conformation, temperament and history and ensure that their animals display the desired physical and behavioral traits. They strive to produce litters where the pups will excel in their career; whether it is showing, hunting, working, or as a pet. Responsible breeders value their reputation and are proud to be known as an expert and excellent resource for pet owners. Responsible breeders plan their litters and provide medical care to the parents and the pups. They provide appropriate socialization to make sure puppies are set up for success in the show pen, in service, or as a family pet. As a part of this they make sure the housing for their breeding dogs and puppies is clean, comfortable and safe.

The reason for breeding in the first place -

Pets are an important part of American culture. Pets are also an important part of our world history. To know that, all that is needed is to view art from different time periods or have a talk with an archeologist or anthropologist. Dogs and cats and other animals were human companions throughout the history of mankind and found in ancient digs on every continent. Over thousands of years humans have bred dogs and other animals for specific purposes; some for hunting, others as herders and guardians of livestock, guardians of home and family, soldiers in war, physical assistants, and many simply as pets. This is still true today. We use special types of dogs whose genetic traits help us with police work, bomb detection, disease detection, search and rescue, helping solve crimes, guiding the blind, assisting the disabled and reaching and assisting those who need psychologic support, and companionship. The list goes on. If breeding is eliminated, the specific traits in dogs are lost.

Missouri’s Proposition B was a catalyst –

Proposition B in Missouri, is important to us because it was the catalyst to start Protect the Harvest. When asked if he would allow a sign for the opposition of Proposition B to be placed on his ranch, our founder, Forrest Lucas, decided to do some investigation. What he discovered was alarming.

The Humane Society of the United States' role -

The Humane Society of the United States was the biggest supporter. The proposition was cleverly named “The Puppy Mill Cruelty Prevention Act”. This name was chosen to hit people in the gut and whip up emotions. It was launched by a letter from Wayne Pacelle, HSUS CEO and President, to the Missouri State Legislature. The HSUS spent millions of dollars on this deceitful campaign. It wasn’t just designed to stop the activities of unethical breeders. There were hidden provisions that reached far past the name of the proposition. One of the key issues is the word “pet” was used, which in Missouri, is anything that can live within 15 feet of a home. This threatened the state’s entire agricultural industry. The way the proposition was originally written, it would have done absolutely nothing to improve the well-being of animals. Instead, it would have added excessive expenses to responsible breeders. Animal Rights groups are looking for inroads to further push their agenda. When considering the initiatives the Animal Rights extremists are writing, supporting and funding, it is important to keep in mind their end goal. Their goal is to eliminate ALL pet ownership.

As a part of the revision of the bill, the name changed from “Puppy Mill” to “Canine Cruelty Prevention Act”. Unfortunately, the HSUS and others extremist animal rights groups are hanging on to the old name. Since we opposed Proposition B that originally had the name “puppy mill” attached to it, animal rights groups have smeared us by claiming that we are against the welfare of dogs and support unethical breeding businesses. These claims are completely untrue. As pet owners ourselves, we support the welfare of dogs and companion animals. We opposed Prop B, because we were against additional regulations placed on responsible breeders, and the threat to agriculture. We were not alone. Opponents included the Missouri Veterinary Medical Association, the American Kennel Club, the Missouri Farm Family Agricultural Alliance, Missouri and Humane Watch to name just a few.