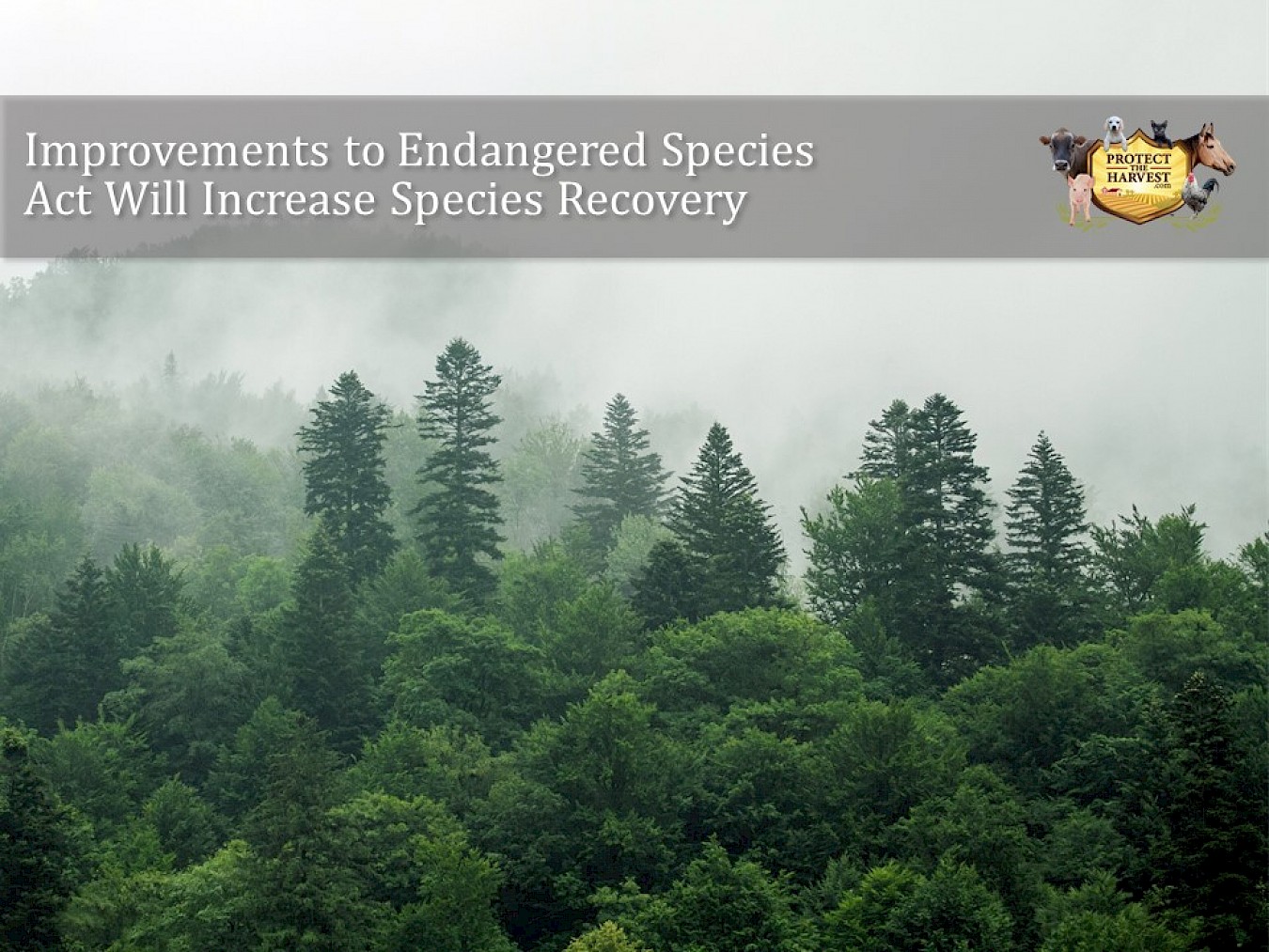 Collaboration With A Wide Range of Stakeholders

Regulations for implementing the Endangered Species Act (ESA) were recently revised by the Trump administration after a lengthy and thorough collaborative effort by a wide range of stakeholders. The ESA has long been in need of improvement, and in 2017 President Trump tasked agencies with seeking ways to improve its regulatory framework. The revisions will allow for more streamlined and effective processes for recovery of sensitive species. The changes apply to the section in the ESA that covers adding or removing species from the Act’s protections as well as the identification and designation of critical habitat. Changes also apply to the section that covers federal inter-agency collaboration.

U.S. Secretary of Commerce Wilbur Ross stated: “The revisions finalized with this rulemaking fit squarely within the President’s mandate of easing the regulatory burden on the American public, without sacrificing our species’ protection and recovery goals. These changes were subject to a robust, transparent public process, during which we received significant public input that helped us finalize these rules.”

Support for the revision of the implementation regulations of the ESA came from a large variety of entities, including career professionals in the Fish & Wildlife Service and NOAA/Fisheries, local and state governments, environmental and business groups, and members of the public. Read some supporting statements here: https://www.doi.gov/pressreleases/what-they-are-saying-endangered-species-act-announcement

Old Version of ESA Recovered Only 3% of Listed Species

Since its implementation in 1973, the ESA has recovered only 3% of listed species. This has been due to limited resources, continuous litigation from NGOs, and those same organizations’ strategic approach in petitioning the listing of hundreds of species at a time. Because of these things, the implementation of the Act has resulted in less efficient processes for recovery. Meanwhile, more than 2,000 “protected” species sat on a list without meaningful, effective action being taken. Despite the predictable and practiced “the sky is falling” type outcry of some environmentalist groups who claim that the ESA has now been “undermined” and “gutted,” the truth is that sensitive species will now have a greater chance of recovery and survival as regulations have evolved to allow better implementation of the Act.

Differentiation of Procedure for Endangered vs Threatened Species

Previously, there was no differentiation in the way the species labeled “endangered” or “threatened” were handled unless there were certain specifications. This meant that instead of resources being focused on the species actually in the most need of protection, funding and manpower were needlessly, thinly spread over hundreds of species. Now, the distinction between the categories has been restored. Endangered species will still have full protection, and treatment of threatened species will be tailored on a species-specific basis so that conservation measures will be commensurate with the threats to the species. The species in the most urgent need of protection will be given the most resources, thus giving them the best opportunity for recovery. This method is not new—the National Marine Fisheries Service never utilized such a one-size-fits-all rule.

Similarly, habitat protection will be prioritized, aiming toward the protection of actual critical habitat instead of potential habitat. Spaces actually occupied by a species will be considered and evaluated prior to unoccupied spaces, again ensuring that biological and physical features necessary for the species survival are present for critical habitat designations. What was formerly a very grey area of the definition of “potential habitat” did great harm to private property owners, who frequently had to sacrifice productive lands for the sake of potential habitat. This occurred even when the species in question was not present, and in some cases, had not even been present historically.

In addition, unclear terminology in the original Act left much room for interpretation. This room for interpretation provided an open invitation for non-governmental environmentalist groups to sue the government. Agencies were therefore forced to spend already scarce funds on litigation that could have better been allocated toward actual species recovery efforts. Clarification will help to eliminate such issues. Clarification will greatly limit the ability for frivolous and extremely costly lawsuits that do nothing toward on-the-ground assistance for the species in question, and everything toward filling the bank accounts of extremist activist groups. For example, the definitions of “foreseeable future,” “destruction or adverse modification,” “effects of the action” and “environmental baseline” have all been clarified to leave less room for interpretation.

Environmental Extremist Actions Will Be Affected

Environmentalist extremist groups have taken extreme advantage of loopholes in not only the Endangered Species Act, but laws like the National Environmental Policy Act (NEPA) and the Equal Access to Justice Act (EAJA) as well. For decades their infamous “sue and settle” tactics have cost taxpayers millions of dollars and prevented sound, balanced natural resource utilization. Fortunately, the changes to the implementing regulations of the ESA will work to help limit such activity. Learn about some environmentalist NGOs and their actions here: https://protecttheharvest.com/what-you-need-to-know/overview-of-environmental-ngos/

In the past, the process of delisting a species has sometimes been more difficult than that of listing a species, due to a higher standard being utilized for delisting than listings. Environmentalist NGOs will undoubtedly continue to sue, but these changes in regulations should result in more court decisions favorable to the Fish & Wildlife Service and Department of the Interior. Keeping a species on the list after it has been recovered has been another stumbling block that has prevented resources from being directed where they are most needed. The regulations state that “The Secretary shall make a [listing] determination solely on the basis of the best scientific and commercial information regarding a species’ status.” Although science has of course always been utilized in decision making, the goal of the changes in regulation is to return to the statutory mandate.

These common-sense reforms will lead to better focus of resources. Secretary of the Interior Bernhardt said: “The best way to uphold the Endangered Species Act is to do everything we can to ensure it remains effective in achieving its ultimate goal—recovery of our rarest species. The Act’s effectiveness rests on clear, consistent and efficient implementation. An effectively administered Act ensures more resources can go where they will do the most good: on-the-ground conservation.”

Protect The Harvest greatly supports the revision of the ESA’s implementation regulations, which will work to better serve our most sensitive species as well as providing a more practical and meaningful balance between conservation and keeping lands healthy and productive.

Prev Article
A Win for Salmon, Steelhead, and Sturgeon at the Bonneville Dam
Next Article
Lawsuit Filed to Overturn Florida's Amendment 13