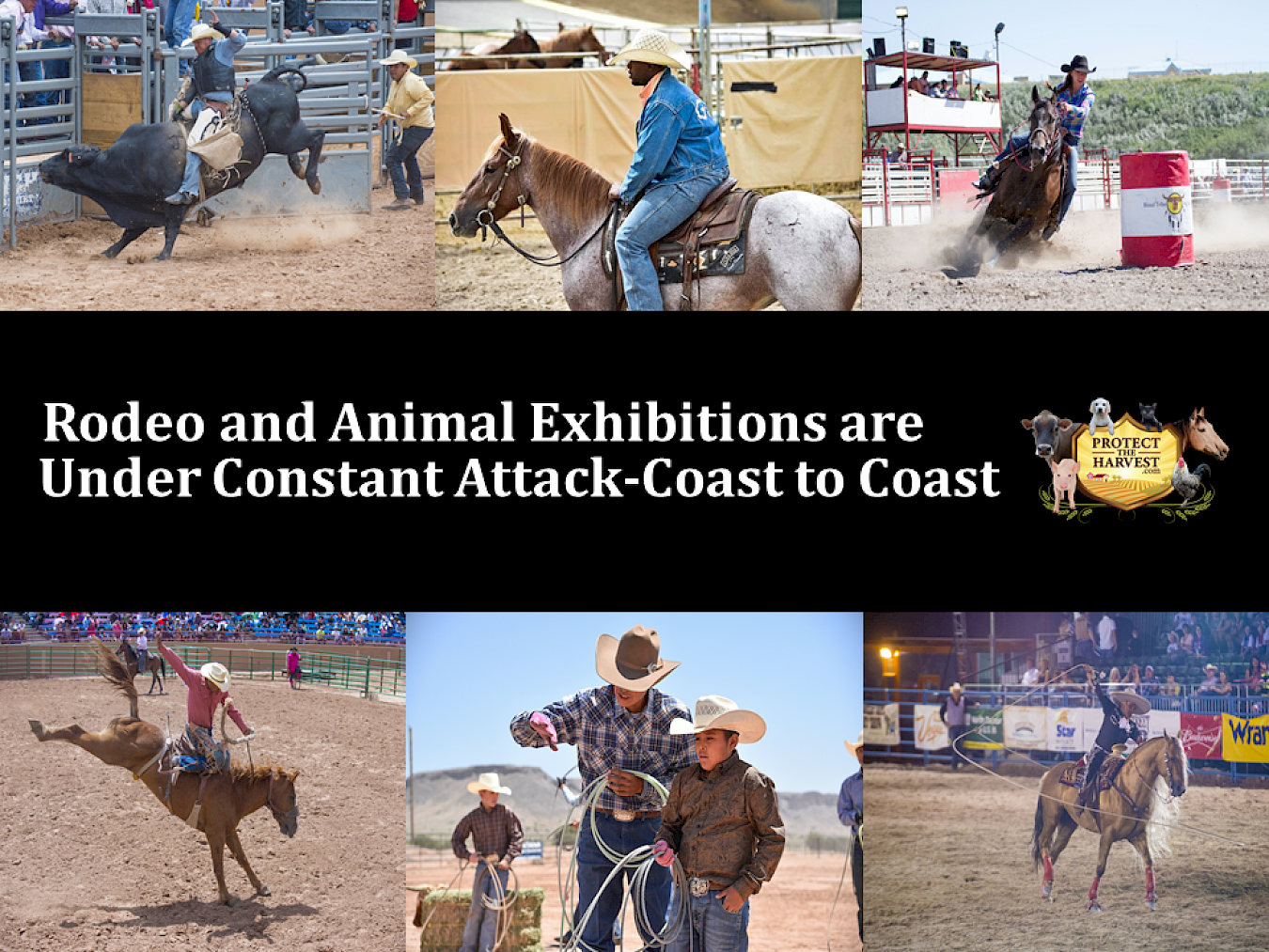 RODEO AND ANIMAL EXHIBITIONS UNDER CONSTANT ATTACK BY EXTREMIST GROUPS

Coast to Coast Rodeo and Animal Exhibitions Are Under Constant Attack

We have written about lawmakers who are promoting bills to shut down rodeo in New York by using falsehoods they are spoon fed from extremist groups. We have also written about the push to end rodeo and animal exhibitions in California. California’s long history with rodeo has very deep roots culturally. At Protect The Harvest we are continuing to investigate these attempts to end animal exhibitions.

The Bigger Picture – All Animal Exhibitions Are Targeted

Some readers may wonder why we are so concerned about a ban on rodeo. Much of it has to do with the loss of historical and cultural influences that helped to shape not only California, but much of America. There is much more behind this proposed ban in Los Angeles than the concern for bulls and horses. The Los Angeles City Attorney was tasked to write an ordinance banning rodeo and “rodeo-like” events based on language used in a Pittsburgh ban which contains over-reaching and dangerous verbiage. Specifically, the Pittsburgh ordinance reads:
“635.04 No rodeo or rodeo related event shall be permitted in which animals are induced or encouraged to perform through the use of any practice or technique, or any chemical, mechanical, electrical or manual device that will cause, or is likely to cause physical injury, torment or suffering. The following devices are specifically prohibited at all events: electric prods or shocking devices, flank or bucking straps, wire tie-downs, and sharpened or fixed spurs or rowels.”

This language is extremely alarming and anyone who owns and competes with their animals should take notice. Since animal extremists believe any ownership of animals is slavery and training an animal is abuse, this ordinance is open for interpretation on what they consider “torment or suffering.” Should this legislation move forward, all animal activities are at risk. You have an agility dog? No more agility. Dressage, show jumping, hunter/jumper, barrel racing, breed shows, reined cow horse, team penning, team sorting, lead-line classes, dog shows, field trials, hunting, police K9, schutzhund, cat shows, horse units in parades such as the Rose Parade, would fall under this language. Livestock shows, 4-H, and FFA exhibitions would also be included as well as educational exhibitions. Training is exactly what the Pittsburgh ordinance was attacking when they used the words “practice or technique.”

States like California, Rhode Island, and Nevada have passed laws that ban or tightly regulate rodeo events; and some city ordinances have followed suit like San Francisco and Irvine in California. Even the rodeo at NRG Stadium in Houston, Texas is consistently bombarded with protesters at their events. Protesters even made the local news at one event. They claimed that as soon as the steers were done at the rodeo that they were shipped to slaughter, but the managing director of sports and events corrected the protesters by explaining:
“Those trucks are taking them to property the rodeo owns about four miles away from NRG Park. There's not enough room to house them at NRG Park, so they are brought in on trucks for their events and then returned. That whole facility is designed with this in mind," she said. "It's all about the livestock welfare and giving them a great space to graze and relax."
Of course, this narrative is NOT what animal extremists want to hear, so they supply lawmakers, city council members, and the general public with falsehoods to promote their agenda. Some of these falsehoods are so outrageous that if one takes the time to think about it, one will just shake their head in disbelief.

Some falsehoods perpetuated by animal extremists are:

False Statement: Flank straps are tightened severely and wrapped around the genitalia of the bucking animal to make them buck.

There is no logic to this statement. Anything tightened around the waist or genitalia tightly as animal extremists claim would cause pain. Therefore, it would cause the opposite reaction, no animal would move because moving would hurt them. In regards to horses, many of the very best bucking horses are mares, therefore there is no genitalia to wrap around.

False Statement: Bucking bulls and horses are tame animals that must be provoked into battle and forced to perform over and over.

Bulls and broncs are bred for competition and genetics are the main factor in determining an animal’s desire and ability to buck. In fact, the American Bucking Bull is now a recognized breed of cattle.

Bucking animals work for literally a few minutes in a year. A qualified ride is 8 seconds, and in a weekend event, they are ridden twice.

Animal welfare is the top priority and there are strict travel regulations and accommodations which include length of travel, required layovers, types of trailers and bedding required.

False Statement: Spurs cut the hide of the bulls and horses

Spurs are required to be dull all points of the rowel must be filed to be dull. In addition, in the saddle bronc and bareback events, the rowel must be unlocked. It must roll freely. In bull riding, the rowel may be loosely locked. This allows the rider’s spur to grip the loose hide of the bull to stay on for the required 8 seconds. An important note to point out- human skin is about 1-2mm thick. By contrast, horse hide is 5mm and bull hide is 7mm thick, so there is no way for the spur to cut the skin.

Prods were developed by cattle industry experts to safely move cattle. They are considered by veterinarians and cattlemen to be one of the most humane methods to move cattle on a ranch, or in veterinary settings. Cattle prods run on D cell batteries and produce volts, not amperage. It is amperage that causes burns. Volts give the shock sensation, a tingly effect. If you have ever had physical therapy accompanied by electrical stimulation from a battery-powered transcutaneous electrical nerve stimulation (or TENS unit), that is voltage that provides pain relief and speeds up healing.

False Statement: Rodeo animals are worked hard and seen as being expendable and have short lives. After a rodeo, they are gathered up and sent to slaughter.

This myth will raise the hackles of ANY horse or cattle person as the truth is quite the opposite. Championship bucking stock is expensive and has been bred from the very best bucking lines. Many bucking bulls, once done with rodeo, are retired to sire the next generations of bucking bulls. Many bucking bulls are worth between $10,000 to over $500,000, with their value increasing as they produce quality bucking offspring. The top bull, Bushwacker once had an offer made to his owner for $1,000,000. The champion bucking horse Nightjacket was sold for $200,000. It is clear that with stock this valuable, they will be well cared for.

Most of the legislation and ordinances against rodeo have been drafted based on the lawmaker’s animal extremist tendencies or with heavy influence and input from animal extremist groups. Many lawmakers are not from rural areas. Most have never even taken the opportunity to meet the competitors, stock contractors, or the animals themselves. These groups claim there is a very high injury rate in rodeo animals, when the opposite is true. The Professional Rodeo Cowboys Association has a 99.9 % safety rating in the sport of rodeo, making it safer to be a rodeo animal than a person driving a car.

Animal Extremist groups via nefarious fundraising tactics have amassed huge bank accounts. This means they have unlimited funds to market and lobby their ideology via city and county ordinances, regulations and state laws. They believe that no animals should be in human care and view animal ownership as slavery and therefore abuse. Due to this ideology, they do not care whether their agenda affects humans or animals. Animal extremist groups do not care about the proud multi-cultural history of rodeo in California either.

It should come as no surprise that Los Angeles is home to the largest Hispanic population in the country. Descended from the Charros and Vaqueros who helped settle the west, there is huge cultural and historical pride in their sport of Charreria. Our modern rodeo has its roots first in Spain, Mexico, then Texas and California.
Charreria offers all the contests that are in rodeo plus a few more. One of those, is the Escaramuza. These women ride side saddle, perform solo with sliding stops. They also perform a refined and perfectly timed drill in groups of ten. As any horse enthusiast knows, riding is a team effort and the horse only does what it wants to do. To see the Escaramuza is like watching an intricate synchronized dance.

Most are not aware of the rich American history of black cowboys, cattle ranching and settling the west. These cowboys were experts at managing livestock and training horses. In particular they were invaluable to the Texas cattle industry in the post-Civil War era. These cowboys made their way north into Colorado, Kansas, Missouri, and then eventually west to California.

Although the ranching industry in the United States is still providing for our citizens and the rest of the world, with the advent of the railroad, the need for the cowboy has diminished from the early years of settling the West. Some found a new way to earn a living, still doing what they do best, but as entertainment for the public and a way to share our heritage instead. To this day, cowboys and cowgirls are demonstrating their skills across the country, bringing our rich history and culture to cities and towns across America. These cowboys and cowgirls compete and often use those same skills while ranching and training horses when they are not on the road.
Union de Asociaciones de Charros del Estado California and Bill Pickett Invitational Rodeo (first Black inductee into the Rodeo Hall of Fame) are two groups who would be adversely affected by a ban on rodeo and animal exhibitions.

The Compton Jr. Posse, a nonprofit organization founded by Mayisha Akbar in Richland Farms, a semirural area in Compton, has been home to many Black horse riders since the mid-20th century. The Compton Jr. Posse has helped many inner-city kids avoid the pitfalls of gangs and instead, become role models for other kids. Ten of these former Jr. Posse members formed a group called the Compton Cowboys, who are breaking into the western rodeo circuit. Their motto “Streets raised us. Horses saved Us.”

What You Can Do to Save Rodeo

Animal extremist groups who push to ban rodeo and animal exhibitions claim the sport as cruelty to animals. They believe the animals are being exploited and that is against the “animal’s rights.” They do not care that the animals are well cared for and are doing the job they were bred to do. Their aim is to stop the use of all animals in any manner, no matter the cost to animal welfare or the damage it does to unique cultures within our country.

We have joined with the Western Sports Industry Coalition to help further address the fallacies perpetuated by animal extremists and the undue influence they have on lawmakers. Our coalition has a very strong voice, representing millions of animal owners and rodeo and animal exhibition enthusiasts.

Sign the Petition and Donate to the Western Sports Industry Coalition

There is information and an outline of a letter to help you cover all the basics which you can read before signing.

More importantly, click HERE and make a public comment.
We ask, as do all members of the coalition, that you keep your comments respectful. Please present factual information and avoid the histrionics that animal extremists like to use.

We cannot sit silent and let these groups manipulate the general public into believing their false narrative. We must protect animal ownership, animal exhibitions, our rich American culture and history.