To most people, the idea of losing the right to own a pet probably seems far fetched, but with the passing of a recent San Diego city ordinance, animal rights activists are bringing this scenario one step closer to reality. According to ABC 10 news coverage last week, San Diego became the 32nd city in the nation to pass a ban prohibiting the "retail sale of dogs, cats, and rabbits in pet stores." The path to San Diego's pet store ban started on March 13, 2013 when the Companion Animal Protection Society, a national animal rights organization leading the movement to prohibit pet sales, presented a report to San Diego city council members. The council, after hearing public testimony, created a special working group composed of "animal organizations, City staff, and the City Attorney's Office to draft an ordinance regulating the sale of companion animals in pet shops, retail businesses, and commercial establishments." Initially, the city's two local pet store owners were not asked for their input on an issue directly impacting their businesses. Bobby Hick's, owner of PetMarket, later testified, "I'm a business owner and I didn't ever know it was happening." The group presented their findings to the City Council on May 1st, 2013, and, amidst strong demands and concerns raised by several local citizens on both sides of the issue, the council agreed to move forward with their consideration of the proposed ban. On July 9th, 2013, the nine San Diego City Council members voted unanimously to adopt demands made by animal rights groups to ban the retail sale of dogs, cats, and rabbits. With its passage, San Diego becomes the 12th city in California to adopt such a ban. During the final meeting, several animal rights activists gathered in the council chamber wearing red shirts, calling themselves the "San Diego Animal Defense Team."  Karen Gregory Clayton, a member of the group, testified before the council that,

"It is unlawful for any person to display, offer for sale, deliver, barter, auction, give away, transfer, or sell any live dog, cat, or rabbit in any pet shop, retail business, or other commercial establishment located in the City of San Diego, unless the dog, cat, or rabbit was obtained from a city or county animal shelter or animal control agency, a humane society, or a non-profit rescue organization."

The ban will force the closure of two local businesses -- PetMarket and San Diego Puppy. David Salinas, President of San Diego Puppy, became the focal point of animal rights protests and threats. In his final testimony to the City, Salinas refuted lies, defended his business practices, and spoke of his love for animals, stating,

"I would never do anything to jeopardize the health of a puppy." 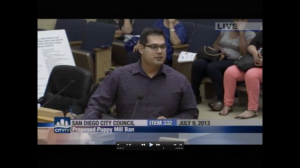 He also addressed the council members, calling into question their logic for purposefully shutting down a local business which provides jobs and generates $68,407 annually in state and city taxes. He reminded the council that,

"We would be out of business if we were in the business to sell sick puppies."

San Diego Puppy released an online blog post following the final City Council meeting calling this ban a "blatant abuse of power."  This San Diego ordinance, banning the commercial sale of dogs, cats, and rabbits, will leave citizens with only one choice. Forget trying to obtain a licensed purebred, because when you're looking for the next family pet, you will only be allowed to select from what's currently available at the local shelter. These bans are growing in popularity across the nation, backed by animal rights organizations like HSUS.  They guilt the general public to adopt the view that animal ownership is an immoral practice, rather than an honorable and rewarding responsibility. Make sure you keep up with your own local government activity. Because, in the end, it will be up to you, as a citizen, to stand up for freedom in your own cities and towns.
Prev Article
Animal Rights Activist Equates Pet Breeders to Drug Dealers? That's Insane!
Next Article
Forrest Lucas Explains Importance of Protect the Harvest