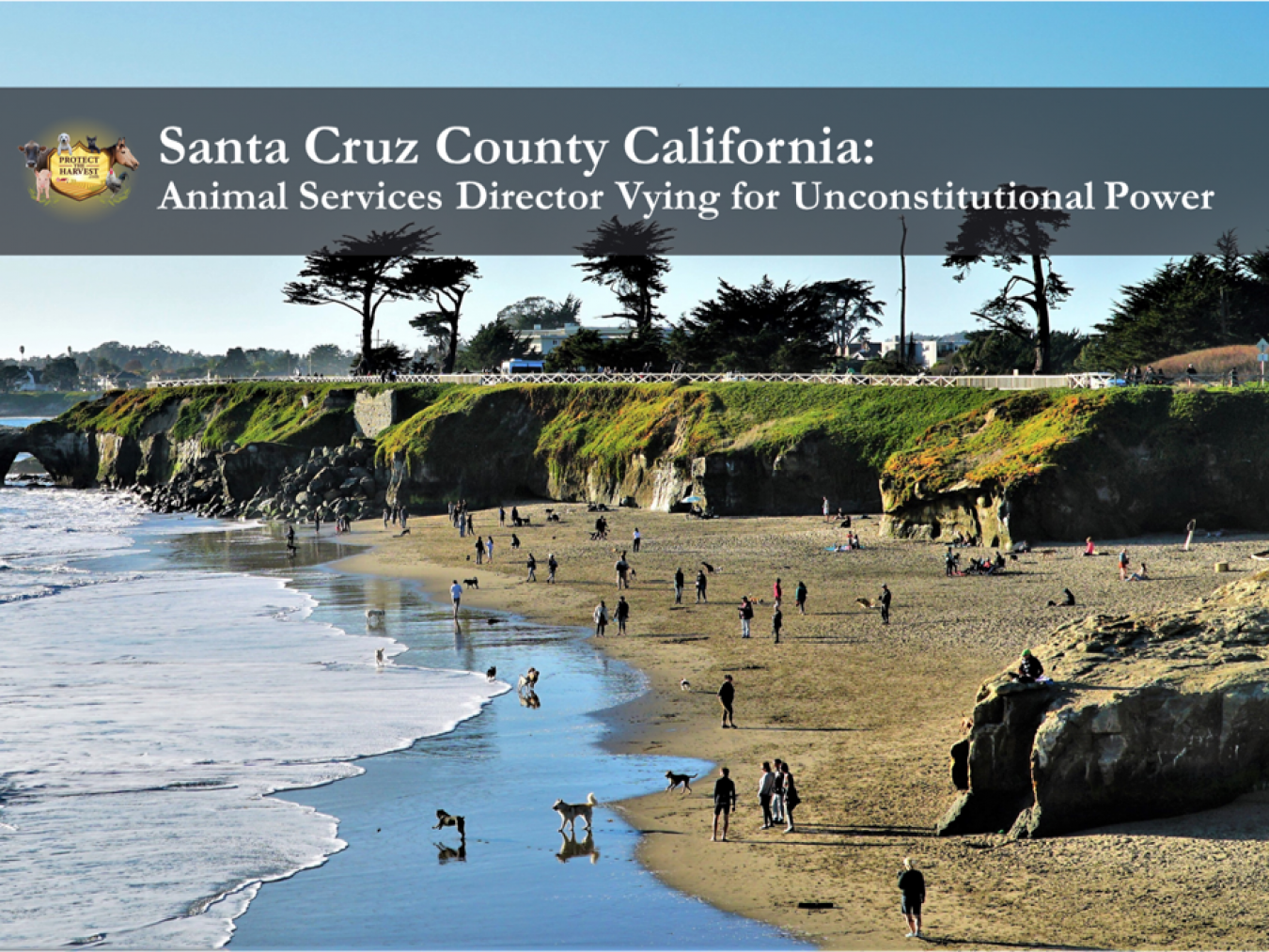 In an earlier Protect The Harvest article, we dove into the outlandish governmental overreach occurring in California’s Santa Cruz County. The hoops a Santa Cruz County animal owner has to go through in order to prove they are taking good care of their animals or some strays is expansive to say the least. The language they purposefully used throughout the animal services ordinance should cause significant alarm.

One of the many restrictions the Model Ordinance outlined is mandatory spaying and neutering of animals. While most of the animal owners understand that spaying and neutering can be a best practice if they are not interested in breeding their animals, those that choose otherwise should not have to be subject to approval by the Animal Control director. According to the new Santa Cruz County Model Ordinance known and reputable breeders and trainers must first seek approval from the Animal Services Director in order to continue breeding. What constitutes “Approved breeding stock” is outlined here:

(4) Dogs which are appropriately trained and actually being used for herding of other, or as livestock guardian dogs, or dogs designated as breeding stock by an appropriate agency or organization approved by the Director after consultation with knowledgeable professionals.

The Director, whom we have found has no formal training in animal science or husbandry, has appointed themselves judge and jury to determine if you should be able to continue to breed your animals in Santa Cruz County. If a resident chooses to appeal any decisions, the Board of Supervisors hears the case.

In addition to mandatory spay and neuter language, the Model Ordinance provides the county’s Animal Services Director or anyone they ask to work on their behalf, the ability to violate Americans’ Fourth Amendment Rights. If the county Animal Services “representative” has the suspicion that an animal in your charge is not spayed or neutered they can enter your property without a warrant and take your animal from your home, without warning.

The ordinance language also allows the Animal Services Director or “assignee” the ability to enter a citizen’s home or property if there is a suspicion that one of their animals may be sick with a communicable disease or have a painful disease. It is extremely concerning that the ordinance allows for what is equal to Fourth Amendment violations based solely on suspicion – not facts or evidence. Here is the actual language:

(X) No person shall have, keep, or harbor any animal which is known or believed to be infected with any dangerous or communicable disease or which is afflicted with any painful disease which is believed by such person to be incurable except as otherwise provided in this title.
Arthritis is a painful and incurable disease which affects many elderly pets. While it can often be managed, this language would allow the Director or “assignee” the authority to enter your home or property and seize your animal.

“Any animal which is known or believed to be infected” can be interpreted a number of ways and few require evidence or are based in science. What if your dog has seasonal allergies or was at a dog park and picked up kennel cough and is coughing or sneezing for a day or two before you get the symptoms under control? What is stopping a representative or agent that the animal services director charges to act on their behalf from entering your property and taking your animal? This is an egregious overreach and nothing short of trespassing and theft.

Additional language that should concern everyone, and is also wide open for interpretation is as follows:

6.04.190 Right of entry for inspection.
(3) The Director or law enforcement officer has reasonable cause to believe that the keeping of an animal on the property is so dangerous that an immediate inspection is necessary to safeguard an animal or public health and safety and there is insufficient time to obtain a search warrant given the safety concerns. Under these circumstances, the Director or law enforcement officer may use reasonable means to immediately enter and inspect the building or property after presenting their credentials to the owner or occupant and requesting entry, if it is possible under the circumstances.
(B) This section does not prohibit the Director or a law enforcement officer from entering property for the purpose of capturing an animal running at large in violation of this title or another applicable law.

The erosion of your constitutional rights as a law abiding American starts with dogs and cats but where will it end. In addition to mandatory spay-neuter, they also deem microchips and vaccines as mandatory. According to the ordinance language, animals over three months of age must be chipped. If an animal is impounded and found to be without a chip, the county animal control will implant a chip and charge the owner prior to its release.

Reading the section on vaccines, one will notice that writer of the ordinance either made an error or they are being purposefully contradictory. They allow you to not vaccinate your dog but then consider them unvaccinated and force you to abide by their rules, and still can come seize your dog anytime they deem necessary. The ordinance language regarding capture and custody of animals allows the animal control director or assignee to seize a dog and take it into custody if they believe it to be unvaccinated. According to the language, this includes dogs with a veterinary exemption from vaccination.

This section is just as purposely vague as the others. If a person subscribes to an animal extremist ideology, basic ownership of an animal is akin to slavery and therefore abuse. They view animals in human care as mistreatment, torment, and suffering. The language in section (F) is vague and leaves a door open to interpretation and misuse by animal extremists.

(F) Animals may not be neglected, teased, abused, mistreated, annoyed, tormented, or in any manner made to suffer.
(G) No condition may be maintained or permitted that is or could be injurious to the animals.

There are a number of regulations in this ordinance that use the terms, “could be injurious to animals.” Anyone who has owned animals, and especially those that work in veterinary hospitals know that animals can injure themselves even in the most well-designed environment. Who decides what “could be injurious?” If it is up to the animal control director or assignee, that is basically providing them with any reason to confiscate animals.

Equipment rules fall under the same category. Any equipment simply by accident has the ability to be injurious. For example, a dog could get tangled up in its own leash while out on a walk with its owner and injure a leg. A bit, reins, saddle, halter and lead rope if tangled or caught on something, or simply too loose by mistake could cause injury to a horse. This language essentially makes any use of equipment or other items a violation of the animal ordinance.

(R) Any equipment, device, substance, or material that is, or could be, injurious or cause unnecessary cruelty to an animal may not be used.

There are many more examples in this ordinance that could be misused and only one thing is clear – nothing about this ordinance is definitive or just.

Elimination of Public Protections from Government Overreach in California

“Notwithstanding any other provision of state or local law (including but not limited to, the Bailey-Keene Act or the Brown Act), and subject to the notice and accessibility requirements set forth below, a local legislative body or state body authorized to hold public meetings via teleconferencing and to make public meetings accessible telephonically or. Otherwise electronically to all members of the public seeking to observe and to address the local legislative. Body or state body. All requirements of both the Bagley-Keene Act and the Brown Act expressly or impliedly requiring the physical presence of member, the clerk or other personnel of. The body, or of the public as a condition of participation in or quorum for a public meeting are hereby waived.

With the stroke of a pen, Governor Newsom unleashed ill-intended elected officials to shove through legislation with only a closing recommendation:

“All state and local bodies are engaged to use sound discretion and to make reasonable efforts to adhere as closely as reasonably possible to the provisions of the Bagley-Keene Act and the Brown Act, and other applicable local laws regulating the conduct of public meetings in order to maximize transparency and provide the public access to their meetings”

All sounds great but who is watching when governing bodies are no longer required to post meeting locations and agendas? And how long will it take to discover all that’s been done against the will of the constituents in each of these areas?

Santa Cruz County Board of Supervisors and their Director of Animal Services collectively showed their hand last May (2020) when they trotted out legislation to ban rodeos, livestock exhibitions, and beef up their own power. The public outcry was loud and effective until the powerful board realized the Bagley-Keene Act and Brown Act had been suspended. Indeed, they walked the legislation back and hastily added 4-H and FFA Livestock Exhibitions to the list of legal activities. All went quiet until January 26th, 2021 when the Board of Supervisors updated their County Code with Ordinance 5366. The meeting minutes include no information as to what Ordinance 5366 entails or how it will affect residents.

The citizens of the County of Santa Cruz will continue to live at the mercy of their elected officials as long as the Bagley-Keene Act and Brown Act are wholly or in part, suspended.

If this has already happened in Santa Cruz County, what is your own Board of Supervisors wiling to do to infringe on your rights?

Are you attending your local meetings and staying on top of the issues?

The first step towards protecting our rights starts at the local level. You can make a difference in your town and county, but you have to take that first step.