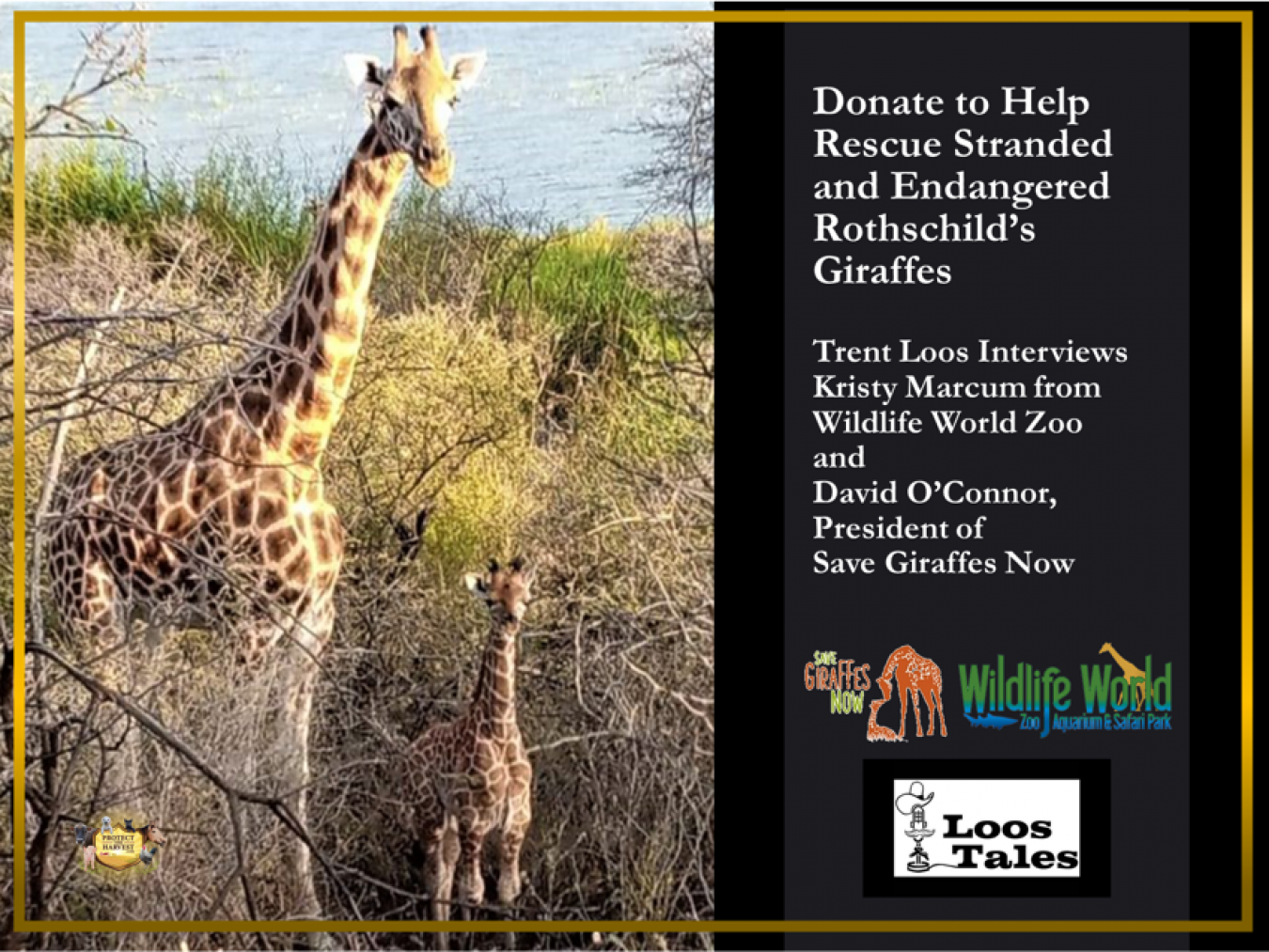 SAVE GIRAFFES NOW NEEDS YOUR HELP

Loos Tales Special Report March 16, 2021 Kristy Morcom and David O'Connor join from Litchfield Park, AZ at the World Wildlife Zoo. David explains the giraffe population is 40% below what it was and these two are about to embark on an adventure in Kenya to rescue some stranded Rothchild's giraffes. The organization, Save Giraffes Now needs donations to fund its work. Floodwaters from heavy rains are gradually submerging Longicharo Island, home to several of these endangered giraffes.

"In December 2020, two females, Asiwa and Pasaka, made a trip off of the island, one at a time. They had all been carefully transferred by American-based nonprofit Save Giraffes Now in collaboration with Kenya Wildlife Service, the Northern Rangelands Trust, and local members of the Ruko community. Another six animals remain on the island."

"The long-necked grazers are extremely challenging to move around, according to David O’Connor, president of Save Giraffes Now, who was present at the first rescue. Unlike elephants, rhinoceroses, and lions, who can be sedated while being transported, giraffe physiology makes this strategy risky for the animals. “Once they’re down and horizontal, which is not a natural position for them, potentially they could choke on their own saliva. Or because of their unique blood flow system, basically their brain could explode because of the high pressure of the blood going to the brain,” says O’Connor."

"The solution was a custom-built steel barge. Made by the Ruko community, it was specifically engineered to carry a tall creature weighing as much as 2,600 pounds, with a rectangular steel structure with reinforced sides atop a series of empty steel drums. ”Our hope all along had been not to tranquilize the giraffe at all, but really try to move them, with the amazing team on the ground, to slowly train them to be comfortable on the barge,” says O’Connor. The training is painstaking, involving food such as mangoes and acacia seed pods, and acclimating the giraffes to the barge."

"There are significant reasons for all this effort. Rothschild’s giraffes are a subspecies—not only one of the tallest of their kind, but also one of the most endangered populations. They look different, too. They have five, nubby horn-like ossicones on their heads (other giraffes have only two), and they appear to be wearing white socks, since their markings fade halfway down their legs. Named for zoologist Lord Walter Rothschild, who observed them in the early 1900s (and founded the Natural History Museum at Tring in England), they once roamed in large numbers across the whole Western Rift Valley, where Lake Baringo is located, in Kenya and into Uganda. But in the mid-1900s, they disappeared from the area due to drought, loss of habitat, and poaching. Today, less than 3,000 are left in the world, with only about 800 in Kenya.
“Giraffes are undergoing a silent extinction, and each one matters greatly to the survival of these animals,” O’Connor adds."

“We must finish these rescues as quickly as possible,” says Susan Myers, founder and CEO of Save Giraffes Now, in a press release. There are plans to move two more female giraffes, depending on weather, staffing, and finances. The final move of the remaining four, including two calves, is hoped for in March 2021. The work is all part of a long-term plan. “ Once we rescue them, that’s not the end of it,” O’Connor says. “That’s actually just the beginning of trying to repopulate the entire Western Rift Valley with this type of giraffe, where they became locally extinct 70 years ago.”