SHOULD THE USDA BE WORKING WITH HSUS?

During the 2013 American Farm Bureau Federation National Convention, U.S. Secretary of Agriculture, Tom Vilsack, highlighted HSUS's bully tactics and strong-arming of the United Egg Producers as an example of a worthy and necessary effort to reach "common ground."

"Now I know that there are not too many fans of the Humane Society in this room. But egg producers thought it was in their best interest to avoid fifty different referendums, fifty different sets of rules. So they sat down with folks and they reached common ground. After all, isn’t that what we’re asking our Congress to do? Isn’t that what we’re asking our political leaders to do? To sit down and make common cause? I think the egg producers have the right idea." - Sec. Vilsack - Ag Wired Article

And, he kept going, as if he had not stated it clearly the first time:

"I'm not suggesting it's easy but there is an opportunity here ... We need to build strategic alliances." Sec. Vilsack - AgriPulse Report

And a month before those comments were made, he said rural America is: 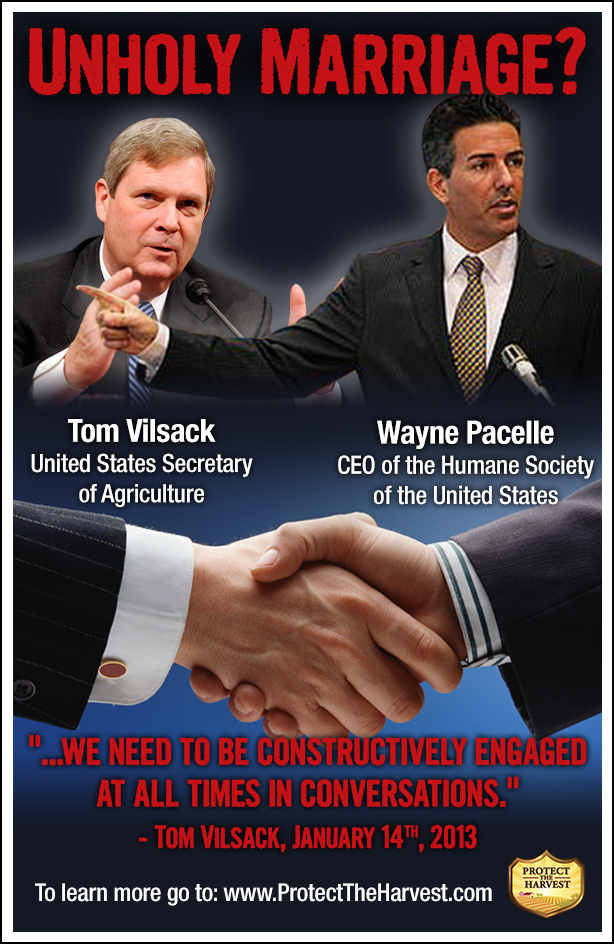 Why is it that the leader of American Agriculture, Secretary Vilsack, finds it necessary to build a bridge big enough for the nation's largest animal rights group to cross? Secretary Vilsack's comments have caused concerns and sparked conversations regarding the United States Department of Agriculture's (USDA) developing relationship with the Humane Society of the United States (HSUS) under his leadership.

Does he realize the truth behind radical organizations, like HSUS?

“My goal is the abolition of all animal agriculture.” - J.P. Goodwin, Grassroots Director for HSUS

As we wrote about in a previous blog post, the Vilsack family seems to have close ties with HSUS. There is no refuting the facts; HSUS offered a direct campaign contribution and spent more than $750,000 running negative attack ads in favor of Christie Vilsack's bid for Congress.

Before Secretary Vilsack started making public statements about his desire for cooperation between America's farmers and animal rights groups, HSUS had already found a way to extend their reach and spread their influence within the halls of the USDA.  As you may recall, former HSUS litigation lawyer Sarah L. Conant was hired as the Chief Enforcement Officer for USDA's Animal and Plant Health Inspection Service (APHIS).

Now, Secretary Vilsack seems to be traveling down a dangerous path, publicly stating his support for agreements and cooperation with a radical animal rights group that is seeking to destroy American agriculture.

It's time to start asking questions.

Why was a former HSUS employee hired by Secretary Vilsack to work at USDA?  Why did HSUS spend hundreds of thousands of dollars in an attempt to get the wife of the U.S. Secretary of Agriculture elected to Congress?  And most importantly, why would the head of the U.S. Department of Agriculture advocate for an unholy marriage between American food producers and a radical animal rights group seeking to attack farmers, alter our food choices, and restrict our freedoms?