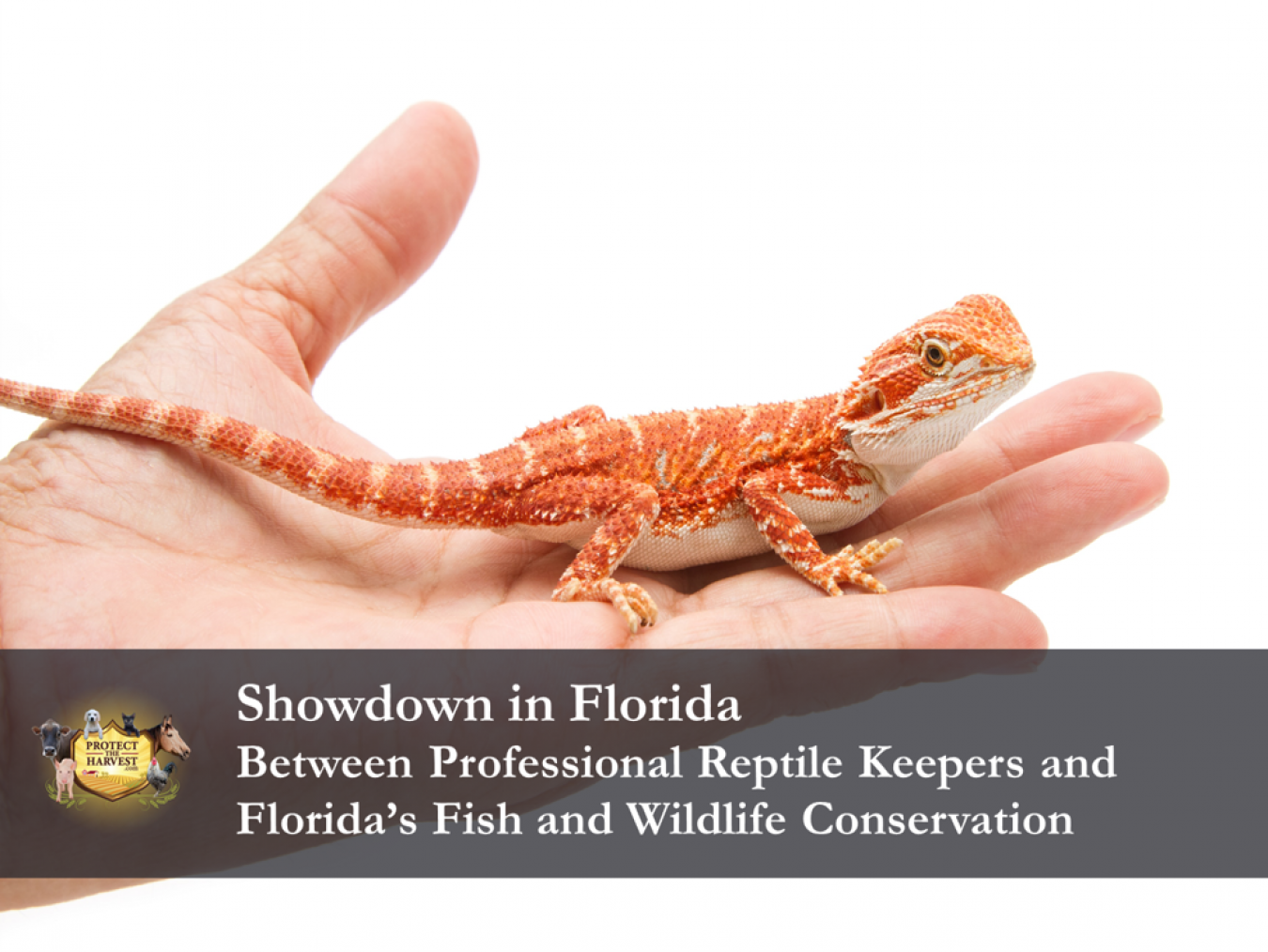 Things are not so sunny in Florida between professional reptile keepers and Florida Fish and Wildlife Conservation (FWC) regarding the classification of non-native invasive reptile species. The FWC is the entity charged to enact rules and regulations regarding the state's fish and wildlife resources.
The reptile keepers are members of the United States Association of Reptile Keepers (USARK) Florida chapter (USARK FL or USARK Florida). USARK is a non-profit organization which represents pet owners, conservationists, business owners, veterinarians and scientists who work with reptiles and amphibians. Recognized as true experts, USARK is a respected resource utilized by federal, state, and local governments for education and training. USARK Florida members are subject to proper licensing and permitting by the FWC under its existing regulations.

USARK’s mission is to:
“...facilitate cooperation between government agencies, the scientific community, and the private sector in order to produce policies that will effectively address live animal husbandry and conservation issues.”

For several years, the media has highlighted stories about the excess of Burmese pythons and other non-native invasive species establishing populations in the Everglades, and other parts of Florida. Even though the FWC is solely charged in Florida with rules and regulations regarding fish and wildlife, Florida legislators amended section 379.372 of the Florida Statutes (SB 1414) that regulate certain nonnative invasive reptiles. The Governor signed this bill into law effective July 1st, 2020.

Why the FWC Feels This is Necessary

A recent presentation by the FWC at the commissioners meeting in February 2021, noted that they believe “breeding for commercial sale and pet ownership increases the risk of establishment in Florida.” They point to factors such as Florida’s climate being suitable for many species, and enough animals being released to allow for breeding and establishment of the species. They go on to make the assertion that “commercial breeding for sale and pet ownership play a significant role in the opportunity component of establishment by increasing the number of individual animals that could escape... Our current classification for the 16 species of high-risk nonnative reptiles that are part of this rule package is not sufficient to protect Florida.”

Due to the amendment made by the state legislature, the FWC is now charged with the implementation. At their July 23rd, 2020 commission meeting they proposed modifying nonnative species regulations found in Chapter 68-5, Florida Administrative Code (F.A.C.).
The final rule at the Feb. 25th, 2021, meeting regarding nonnative species regulations was approved. The summary from Florida FWC is as follows:
1. Proposed rules will eliminate commercial breeding and pet ownership of these high-risk reptiles to protect Florida’s environment and economy.
2. Proposed rules will place these high-risk reptiles on the Prohibited Species List, limiting possession to permitted facilities engaged in educational exhibition, research, or eradication or control activities.
3. Final rule language includes provisions to lessen the impact to regulated entities. Affected Parties: Owners of tegus and green iguanas, retail pet stores, reptile industry, nuisance wildlife trappers, exhibitors, citizens, land managers and municipalities of Florida adversely affected by or concerned about invasive wildlife.
A very immediate concern was shared by Dr. Richard Engeman, former biostatistician and biologist for the National Wildlife Research Center, and USARK President Phil Goss, is that prohibiting certain species will likely drive illegal trade and breeding of the animals. If this happens there would be no regulatory control and no knowledge of who possessed the animals or where they would be kept.

Stakeholders Will Be Regulated Out of Business

USARK is extremely disappointed with the new rules as they reclassify all of these species to prohibited, which changes how they can be kept. The rules put unreasonable burdens and timeframes on businesses as there is no outdoor breeding allowed, so breeders would need to build new buildings to house all of their animals and then end breeding by June 30th, 2024. Eggs laid after that date must be destroyed, even if you have the animals indoors. It is certainly unreasonable to think someone would take on the expense and effort to build an indoor facility to use for only three years.
A full summary can be found HERE

The new rule adds green iguanas and tegus to the Prohibited Species list. It moves others from the heavily regulated Conditional Species Program to the Prohibited Species list. Both measures will cause the ripple effect of putting legitimate reptile breeders and sellers out of business. This action ultimately prohibits owning and breeding of the listed species in the state.

USARK’s affected members are not opposed to logical regulation; rather they are opposed to overreaching and unconstitutional mandates, which is what they believe this to be. Responsible breeders and owners will be put out of business and offered no compensation.

Phil Goss, USARK President, strongly disagrees with this direction by FWC and states that the reputable businesses and breeders are NOT the ones responsible for the release of invasive species. Eleven years of FWC data revealed that, “Over 7,700 in-person inspections of Conditional Species List license holders for reptile species under consideration for prohibition produced only 6 citations (0.08%) with none being for escapes. This represents extraordinary compliance. Such inspections are assured by the existence of the licenses required by the Conditional Species List.”
Goss notes that Florida reptile businesses who are members of USARK have worked with FWC and other agencies to create more stringent standards for keeping reptiles. What makes the rules more absurd is that, for over a decade these stakeholders have been requesting FWC to regulate tegus, which affirms that these responsible reptile owners and breeders are open and committed to common-sense regulation of “high-risk” species. Goss and USARK believe there is a bigger agenda in play. They assert the primary goal of the rule package considered is ultimately the elimination of commercial breeding and pet ownership.

What Happened In Between

The first order of business for USARK Florida was to successfully take on the state legislators by filing suit declaring aspects of SB 1414 unconstitutional. USARK Florida also provided an analysis by economic consulting firm Capital Trade, Inc., which specifically identified various shortcomings found within the economic analysis of the proposed rules provided by the FWC.

Ariel Collis, an economist with Capital Trade, Inc., an economic consulting firm located in Washington D.C. has researched the economics of the U.S. reptile industry for over a decade. He has authored several papers on the U.S. reptile industry, and specifically one entitled An Economic Impact Report on Florida’s Reptile and Amphibian Industry. He interviewed hundreds of reptile owners in Florida, many of who deal with the species of snakes and lizards named in the proposed changes, as well as the owners of Florida businesses providing products and medical services for those animals.

USARK offered reasonable compromise to the new rules from FWC. The following is an excerpt from USARK to FWC in a letter dated October 2020:
“USARK Florida also offered three lower cost regulatory alternatives (LCRAs) that would better accomplish the goal of addressing invasive species while allowing a highly regulated commercial industry to continue, as required per Florida Statute 120.541. Specifically, USARK Florida proposed the following:
(1) make no change to Chapter 68-5, Florida Administrative Code, as the current regulatory scheme has worked well in Florida.
(2) add tegu lizards to the Conditional Species list, subjecting them to the same stringent requirements applicable to other Conditional Species, including caging, biosecurity, and reporting requirements—something that USARK Florida advocated for at the inception of the Conditional Species regulations; or
(3) add tegu lizards and green iguanas to the Conditional Species list, subjecting both to the stringent requirements of the existing Conditional Species permitting program. “
USARK also requested the creation of a Technical Assistance Group (TAG) to discuss practical regulation of the species that were just listed as Prohibited. At the February 25th, 2021 FWC meeting a TAG group was ordered by the Commissioners, but is yet to be fully developed. The task of the TAG will be to provide expert guidance and assist with the amendment and development of regulatory rules managing nonnative reptile species in Florida. While this is a positive move, it is too late in the game to alter any of the changes already made.

What the Experts Have to Say

Dr. Richard Engeman, former biostatistician and biologist for the National Wildlife Research Center (a research unit of the U.S. Department of Agriculture), with over 200 publications regarding invasive species, concurs with USARK’s Goss that this new rule is an overreach. He observes there have been no documented escapes or releases from Conditional Species List license holders. Additionally, none of the species on the Conditional Species List, “...has established a wild population since implementing this tightly controlled regulatory approach.”
His conclusion is, “The existing Conditional Species List approach should be maintained with the addition of green iguanas and Argentine giant tegus as a means to securely protect Florida’s environment from escapes or releases while permitting commerce in the listed species, including commercial breeding.”

Attention seekers like Audubon Florida stated, “a few escapes can become populations, and then taxpayers and private landowners are on the hook for millions annually in eradication and management costs. Audubon supports these proposed rules.” The Everglades Coalition also weighed in pronouncing they “strongly support” the rules related to high-risk reptiles. It is clear these groups have not considered the experts, true data, and the economics of the new rules. Indicative of the animal/environment extremist communities and the media, they utilize emotion, philosophy and even scare tactics over data, facts, and science.
The FWC is also utilizing fear to gain public approval by touting hefty costs and threats to personal property with such statements as, “Management costs by FWC are over $8 million each year. One of our primary management priorities is the Argentine black and white tegu, where nearly $1 million is spent annually managing this unregulated species. Other agencies also spend millions of dollars in Florida to reduce the impacts of invasive fish and wildlife. Citizens are also impacted directly when their private property is affected.”

Fear is a tactic Protect The Harvest often sees put to use by NGOs. It is not unlike politics at the highest level; an untrue, well-crafted and delivered soundbite often carries much more weight than time-consuming research to uncover the real numbers, data, and facts. With COVID taking such a toll on businesses, it would seem that FWC goals may be better served by maintaining relationships with individuals and businesses who desire to work toward the existence of a successful, well-regulated, secure means for the management and ownership of reptiles in Florida.