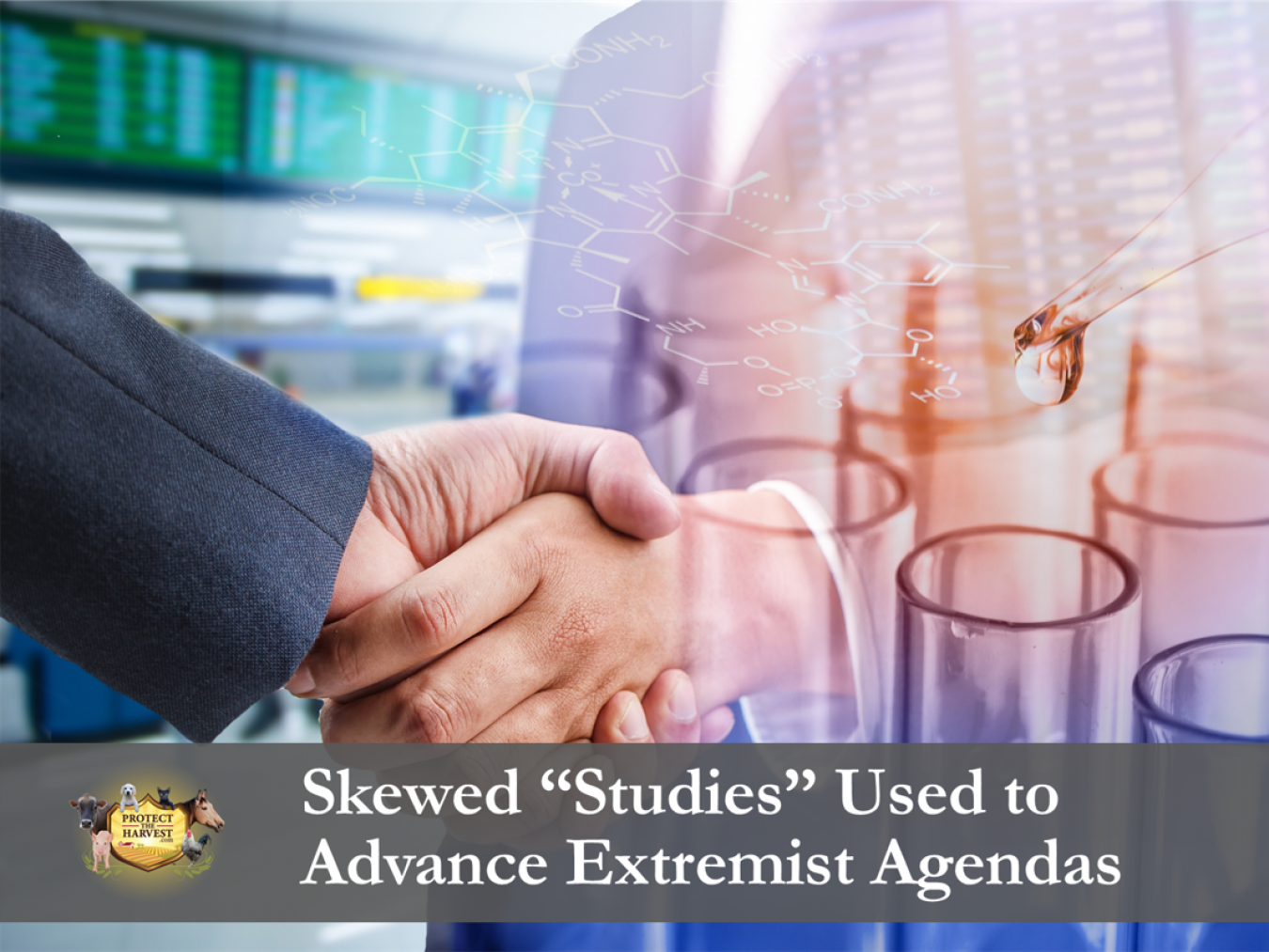 As the war against animal agriculture rages on, it has become common for wealthy animal and environmental extremists to fund, conduct, and then publicize biased and erroneous studies via complicit media outlets. The skewed results of such studies are nearly always presented to the public as irrefutable facts, but the reality is that these studies are most often completed by hand-picked, like-minded researchers, frequently with the predetermined goal of “proving” that animal agriculture should be eliminated. This kind of slanted research is designed to demonstrate that meat and dairy products are supposedly unhealthy to eat, that animal agriculture is supposedly harmful to the environment, or a combination of both.

In addition, it is standard for “researchers” to omit information that is contradictory to the desired outcomes of their work. Sadly, it has become standard practice for a significant portion of the mainstream media to refuse to cover opposing viewpoints. Thus, even when the incomplete, biased studies are contested by experts, rebuttals are unlikely to get any coverage. In the rare instances that they do, the damage can already be done in the mind of a well-meaning but perhaps non-discerning reader.

The average consumer might not normally track down, read, and review studies; instead they may rely upon various media for information. The problem is that much of the media plays the role of an all too willing accomplice in driving extremist narratives. When studies are published and pushed to the news, much of the media routinely features flawed statements that are attributed to scientists. It’s a subtle but effective ploy that can work to suggest that the overall scientific community, or at least a significant portion of it, support the findings. This is very often not the case.

A recent article in the UK’s SkyNews was titled, “Ending animal agriculture and planting trees on empty fields is 'best chance' to slow climate change, scientists say.” The truth is that there were only two scientists behind this study: Professor Patrick Brown of Stanford University, who is also the CEO of vegan food brand Impossible Foods, and Professor Michael Eisen of the University of California, Berkeley, who is a consultant for Impossible Foods. At the beginning of the study, published in PLOS Climate journal, it is plainly stated under Competing Interests that: “Both (Brown and Eisen) are shareholders in the company and thus stand to benefit financially from reduction of animal agriculture.” Unfortunately, most of the public will never see such a key piece of information.
This is a perfect example of the all-too-often underhanded way that animal and environmental extremist agendas are promoted to the public under the guise of sound science.

EAT is a global non-profit startup dedicated to transforming our global food system, and to creating a “global planetary health diet that is healthy for both people and planet.” Highly anticipated and expected to be revolutionary, the EAT-Lancet Commission’s report was publicized in January 2019. It turned out to be simply an upcycled rehash of the tired “eating meat is bad for the planet” mantra.
Dr. Frank Mitloehner is a professor at the Department of Animal Science at UC Davis, an air quality specialist, and the director of the CLEAR Center (Clarity and Leadership for Environmental Awareness and Research Center). Regarding the EAT report, he stated, “…the disservice of the EAT Commission’s work – the downright danger – is that it leads the public to believe that food choices will drastically affect the climate and the environment overall.”

Dr. Mitloehner analyzed the report closely, and stated that he “found numerous incorrect references, and both the methodology and conclusions to be flawed.”

He questioned the commission and finally received an email from Fabrice DeClerck, the science director of the EAT-Lancet Commission:

“Finally, the meat consumption limits proposed by the Commission were not set due to environmental considerations, but were solely in light of health recommendations. The dietary guidelines only refer to healthy eating. Thus is not the diet to reduce climate change, but the diet to reduce the risk of premature mortality due to dietary related health causes...”
Dr. Mitloehner stated, “I applaud Dr. DeClerck’s honesty, but it’s a glaring example of too little too late. The much-awaited study of the EAT Commission makes environmental claims that are misleading the public into thinking all one has to do to halt climate change is opt for a veggie burger. It’s a claim that has no basis in science, not even the brand employed by the commission in the recently released report.”

With such a fanatic push to force veganism on the global population, it’s natural to wonder what the motivation behind it might be. Beyond an underlying sense of supposed moral superiority by the food elitists, the vegan movement is in no small part driven by greed.
The FAIRR Initiative was founded in 2015 with the stated goal of making the food supply chain more sustainable by promoting vegan foods, while also “helping investors cash in on a lucrative new business.” FAIRR was founded by seventy-one investors worth a whopping $1.9 trillion, who are working together to put pressure on the world's largest food companies to "future-proof" their supply chains by bringing more meat alternatives to market.

FAAIR Founder is a Vegan Billionaire Driven by Ideological Agenda

British billionaire Jeremy Coller is a founder of FAIRR, the Coller Institute, and the Jeremy Coller Foundation, which has the primary goal of ending so-called “factory farming.” Coller explained to Business Insider that since members of FAIRR comprise a large percentage of investors in grocery chains and food manufacturers, “they essentially have the power to say ‘we own you.’ The investors can then steer food companies toward more sustainable supply chains.” Not surprisingly, the supposed sustainability they tout is tied directly to profitability.

Coller was one of the main supporters behind an extremely biased study titled “Rethinking Food and Agriculture 2020-2030: The Second Domestication of Plants and Animals, the Disruption of the Cow, and the Collapse of Industrial Livestock Farming.” The Machiavellian mentality behind the study is frankly terrifying, as it completely disregards the realities of the world’s nutritional needs and how it can only realistically be provided with animal agriculture as part of the equation.

The “study” in question states:
“The By 2030, demand for cow products will have fallen by 70%. Before we reach this point, the U.S. cattle industry will be effectively bankrupt. By 2035, demand for cow products will have shrunk by 80% to 90%. Other livestock markets such as chicken, pig, and fish will follow a similar trajectory. There will be enormous destruction of value for those involved in rearing animals and processing them, and for all the industries that support and supply the sector (fertilizers, machinery, veterinary services, and more). We estimate this will total more than $100bn. At the same time, there will be huge opportunities for the producers of modern foods and materials.”

Those opportunities are based on something you’d find in a bizarre science fiction movie. “The current industrialized, animal-agriculture system will be replaced with a Food-as-Software model, where foods are engineered by scientists at a molecular level and uploaded to databases that can be accessed by food designers anywhere in the world.”

The report doesn’t end there and goes on to say that 60% of the land currently being used for livestock and feed production will be put to other uses by 2035.

Wealthy vegans of the world like Coller are so caught up in their zealous hubris, they refuse to acknowledge the fact that the nutritional needs of the global population cannot be properly filled by vegan diets. A close look at the vegan movement as a whole reveals a strong anti-humanistic cant.
In addition to being nutritionally lacking, it turns out that vegan diets are simply not desirable to most people. Consumers vote with their dollars, and it is quite telling that fake meat sales have plummeted. 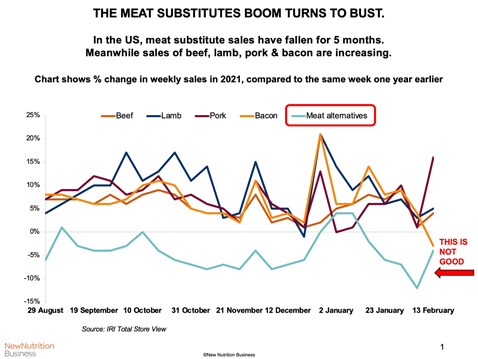 It has been estimated that a mere 3% of the world’s population is vegan, despite the availability of vegan foods and despite the nonstop propaganda promoting the vegan lifestyle.

It would seem that the food elitist billionaires funding the war on animal agriculture are well aware that their platform is a shaky one, and one that can only be promoted through utter chicanery.

Prev Article
Opinion: Colorado’s top animal-protection officer is not a friend of livestock producers
Next Article
Nevada Rancher Fights for His Livelihood