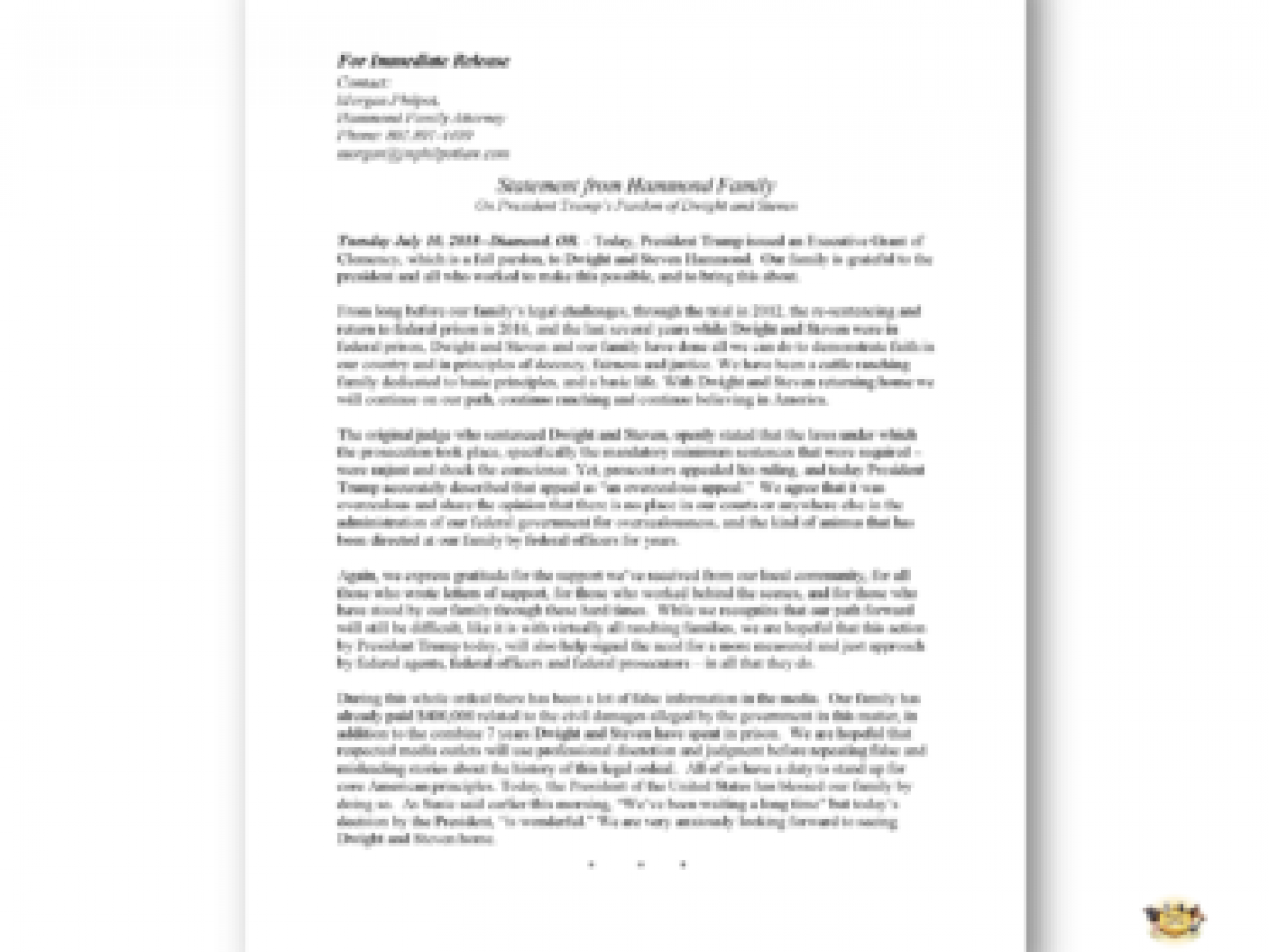 Dwight and Steven Hammond have been Pardoned by President Trump.
Please take the time to read and share the Hammond Family’s Official Statement:

Statement from Hammond Family
On President Trump’s Pardon of Dwight and Steven
Tuesday July 10, 2018–Diamond, OR.

Today, President Trump issued an Executive Grant of Clemency, which is a full pardon, to Dwight and Steven Hammond. Our family is grateful to the president and all who worked to make this possible, and to bring this about.

The original judge who sentenced Dwight and Steven, openly stated that the laws under which the prosecution took place, specifically the mandatory minimum sentences that were required – were unjust and shock the conscience. Yet, prosecutors appealed his ruling, and today President Trump accurately described that appeal as “an overzealous appeal.” We agree that it was overzealous and share the opinion that there is no place in our courts or anywhere else in the administration of our federal government for overzealousness, and the kind of animus that hasbeen directed at our family by federal officers for years.

Again, we express gratitude for the support we’ve received from our local community, for all those who wrote letters of support, for those who worked behind the scenes, and for those who have stood by our family through these hard times. While we recognize that our path forward will still be difficult, like it is with virtually all ranching families, we are hopeful that this action by President Trump today, will also help signal the need for a more measured and just approach by federal agents, federal officers and federal prosecutors – in all that they do.

During this whole ordeal there has been a lot of false information in the media. Our family has already paid $400,000 related to the civil damages alleged by the government in this matter, in addition to the combine 7 years Dwight and Steven have spent in prison.

We are hopeful that respected media outlets will use professional discretion and judgment before repeating false and misleading stories about the history of this legal ordeal. All of us have a duty to stand up for core American principles. Today, the President of the United States has blessed our family by doing so.

As Susie said earlier this morning, “We’ve been waiting a long time” but today’s decision by the President, “is wonderful.” We are very anxiously looking forward to seeing
Dwight and Steven home.
* * *