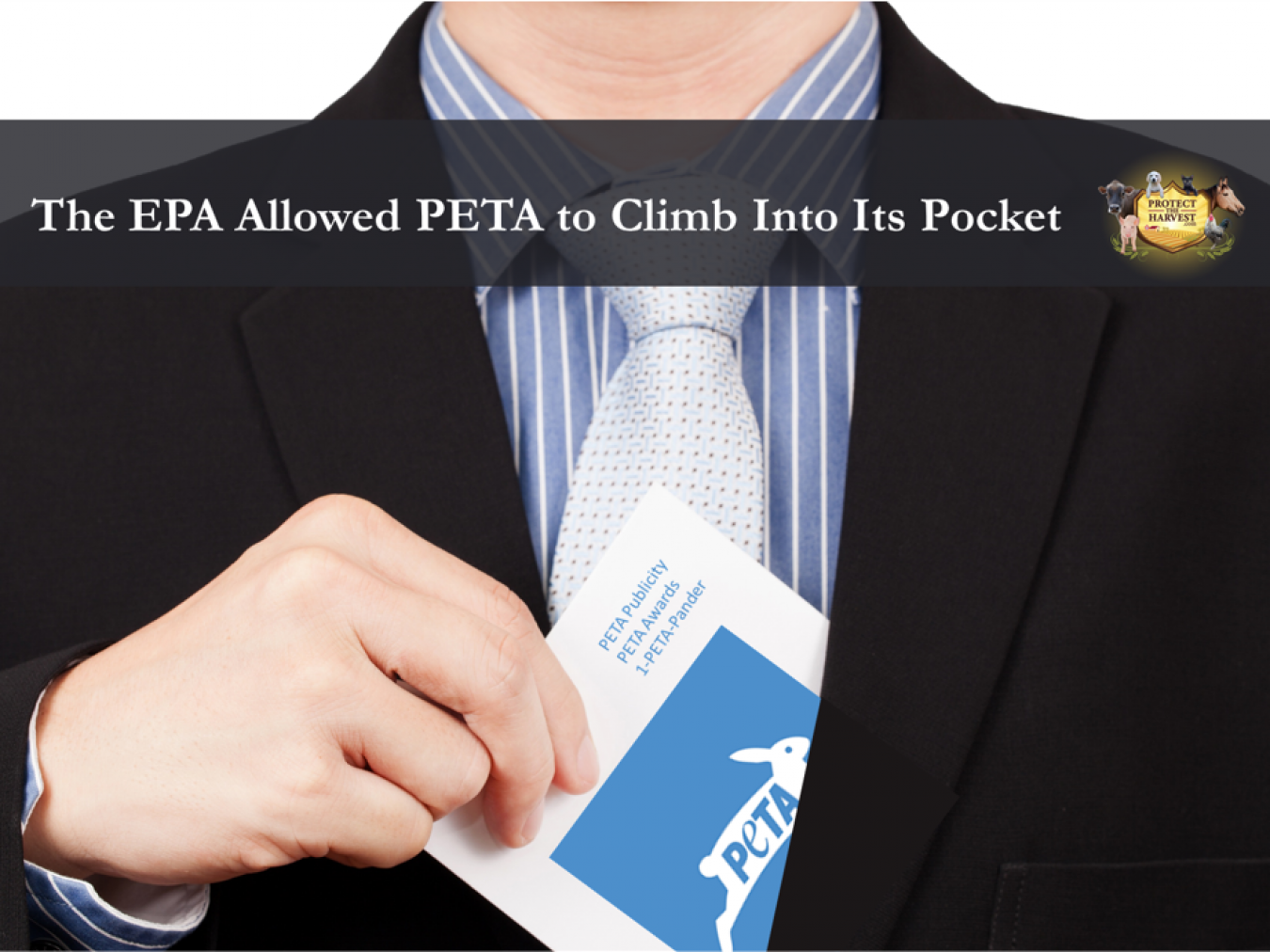 THE EPA ALLOWED PETA TO CLIMB INTO ITS POCKET

In September 2019, PETA claimed victory as Andrew Wheeler, the head of the Environmental Protection Agency (EPA), held a press conference stating that the EPA has pledged to end toxicity testing on mammals by 2035. While long term this news may be encouraging, it is also disheartening as PETA staff were seated next to Wheeler at the press conference. What is missing are the scientists and research teams. They are the subject matter experts who for years have already been working on finding ways to reduce the need for animal testing.

During the press conference, Wheeler indicated that PETA was a key player in the effort. PETA seized on this event and their relationship with Wheeler even further by naming a scholarship after Wheeler’s mother, Pat in October 2020. He seemed quite happy to accept the scholarship on her behalf, pandering even further to PETA by referencing the ‘ethical treatment of animals’ in his statement.

"My mother was a supporter of the ethical treatment of animals all her life, so this scholarship is special for me and my family," says Wheeler. "Scientific advances in cell-based testing and computation methods are now at a point that it's no longer necessary, or even useful, to use animals in toxicity tests. I'm happy to be in a position to lead EPA in this direction."

Wheeler went even further stating he “…feels that it's no longer necessary, or even useful, to use animals in toxicity tests”.
Wheeler and the EPA are not the only agency to project unrealistic expectations to the public. The FDA states on its website that it “supports the development and use of alternatives to whole-animal testing as well as adherence to the most humane methods available within the limits of scientific capability when animals are used for testing the safety of cosmetic products. We will continue to be a strong advocate of methodologies for the refinement, reduction, and replacement of animal tests with alternative methodologies that do not employ the use of animals”.
And yet in a statement buried further down on the FDA.gov website, they go on to note, “There are still many areas where animal testing is necessary and non-animal testing is not yet a scientifically valid and available option.”

Why Are These Agencies Playing Politics with Animal Extremists?

The EPA and FDA appear to be pandering to the animal extremist community. This is interesting particularly when our federal government requires the use of animal testing in some scenarios including chemicals, drugs, and vaccines in an effort to keep both humans and animals safe and healthy (Food, Drug & Cosmetic Act). Our government agencies should always utilize science, data, and technology updates to improve practices and phase out or eliminate those that are outdated. Yet, most in the scientific community do not see complete elimination of animal research and testing in the near future.

Americans for Medical Progress see even more issues with the EPA statement…
“Aside from technological limitations, there’s another big reason to be concerned about the EPA’s announcement. The decision – one which will dictate how science should be conducted in the near future – did not appear to include much input from actual scientists. Even the EPA’s own press release failed to include supportive comments from a single researcher. Instead, the agency chose to feature four separate animal rights groups. No matter how you feel about animals, this notable omission should send a chill down the spine of every American.”

Also weighing in, Stanford Medical College wrote…
“…U.S. federal laws require that non-human animal research occur to show the safety and efficacy of new treatments before any human research will be allowed to be conducted. Not only do we humans benefit from this research and testing, but hundreds of drugs and treatments developed for human use are now routinely used in veterinary clinics as well, helping animals live longer, healthier lives. It is important to stress that 95% of all animals necessary for biomedical research in the United States are rodents – rats and mice especially bred for laboratory use – and that animals are only one part of the larger process of biomedical research.”

Animal Extremist Believe That Animals Should Not Be Utilized by Humans

The PETA website states: “Animals are not ours to experiment on, eat, wear, use for entertainment, or abuse in any other way.” The animal extremist groups have a definite bias and agenda against animal research as they do not philosophically believe there should ever be a reason for animal testing, even if it saves human and animal lives. Independent scientists and the EPA should be interested only in the actual science, and not bring their personal agenda, beliefs, philosophy, and bias to their jobs.

Government Agencies Should Not Be Influenced by Groups with Radical Ideologies

At Protect The Harvest we also are concerned about the access these radical groups, specifically PETA have to Government Agencies. In particular allowing PETA to claim a victory seated next to Wheeler at an EPA press conference when scientists and research teams have been working for years to create ways to test safety and efficacy without using animal models whenever possible. Our government agencies including the FDA and EPA have a responsibility to stay impartial and should not be allowing the animal extremist ideology to influence their discussions and direction.

Article - EPA Plan will Place Animals, Humans and the Environment at Risk. So Why is PETA Celebrating? - Click Here