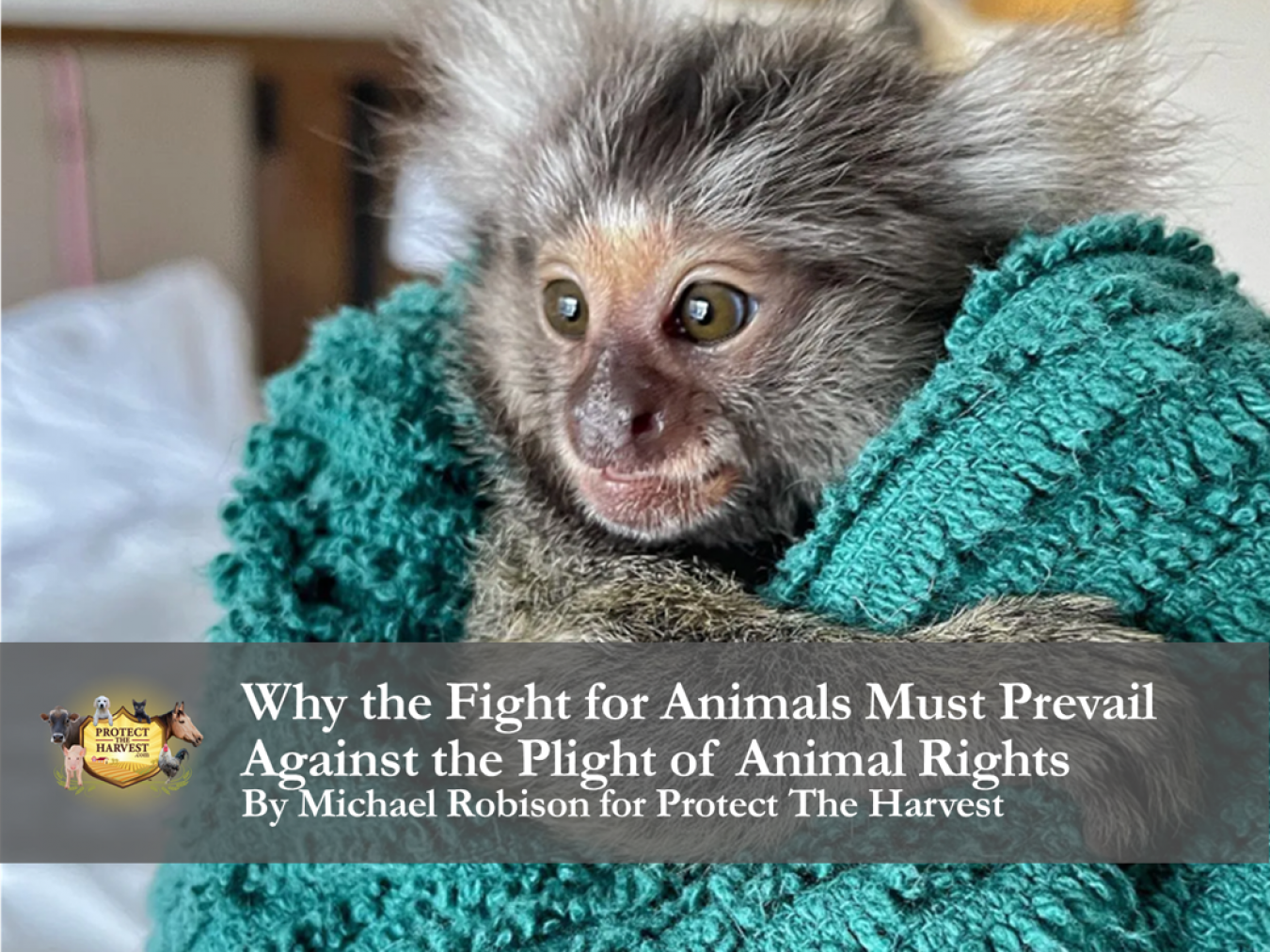 THE FIGHT FOR ANIMALS MUST PREVAIL AGAINST ANIMAL RIGHTS

By Michael Robison for Protect The Harvest

There is a war within the ranks of those who stand for the good of animals, specifically the most endangered and prized animals that have become the icons of zoos, movies, and non-profits worldwide.

Before we expose the plight of this alleged war, let's talk about what got us to this point.

For the last few decades, there has been a growing concern among many people about using animals in entertainment, enjoyment, and academics.

If you're older than 35, like me, you might remember the days of seeing animals such as chimpanzees, tigers, capuchin monkeys, and parrots in movies, on television, and in live entertainment. Maybe you remember growing up and watching Jack Hannah appear on late-night television or a morning show with a tiger cub, a small bear, snakes, and the like. Those very appearances by animals inspired me to focus my energy and work on caring for animals.

From an early age, I have been hands-on with animals of all kinds. In kindergarten, I was the kid who brought home the class pet on the weekends or for the summer to provide proper care. By high school, I was rescuing exotic birds and local wildlife like deer and squirrels and working as a veterinary assistant. I even started the journey toward being a veterinary student, but life took a different route.

I spent twenty years as an entrepreneur, business owner, and leader of a large non-profit. While it was not a career focused on animals, my spare time, extra resources, and attention were most often diverted to caring for injured, abandoned, and abused animals. Throughout the last twenty-two years, I have been able to serve and help more than 500 animals of different species, all with unique stories and needs.

During that time, we saw the public face of animal care, media, and accessibility change. During that time, the rise of the animal rights movement became a primary focus of media and organizations around the nation. Animal rights is a stark deviation from the concept of animal welfare, and the result of this focus threatens to end the ability of humans to enjoy the beauty of the animal kingdom.

As knowledge expands, we gain more data from caring for animals; expanded resources become available, the animal welfare standards continue to evolve and improve. This could apply to the enclosures in which they're kept, the diets they're fed, the psychological enrichment they receive, or the medical care they are given. Those who genuinely care about animals focus intensely on the best animal welfare standards.

However, the rise of animal rights poses a significant threat to the overall concept of animal welfare.

While animal rights and animal welfare are oriented towards the well-being of individual animals, they differ significantly. Animal rights advocates believe that every animal deserves the right to live a life free from human control.

Under this set of ideals, you have organizations such as PETA, People for the Ethical Treatment of Animals. The non-profit group has focused millions of dollars, more than $72 million in 2021, towards removing the rights and access humans have to any animals. They have utilized political ideals and verbiage to create campaigns that mirror human rights and civil rights movements. For example, their latest campaign uses the phrase "end speciesism," which implies the discrimination of rights of animals by any human.

Such groups have long fought to "free" animals from any form of captivity, human interaction, and exposure to any media or publicity. This is where you have seen the groups fight to remove the killer whales from Seaworld, using tactics like the film Blackfish. They have portrayed the use of animals for shows and displays as an egregious abuse, resulting in the end of such shows and viewings.

This movement shut down the century-old Barnum and Bailey Circus under the auspices that the group had long abused, exploited, and violated the rights of the animals.

But, they have not just set their sights on places like the circus and public aquariums. They have begun to shift their attention to privately owned animals nationwide.

In 2021 PETA decided that a family who owned a winery in California had no right to own a Giraffe named Stanely, which they claimed was being abused by exploitation to draw visitors to the business. Likewise, beginning in 2016, they set their sights on a group of retired performing chimps housed in Festus, Missouri. That fight for the retired chimpanzees has continued to rage on and has seen the groups utilize federal taxpayer funds to remove privately owned animals from private citizens, despite no violations of laws or ethics.

These animals, like Tonka the Chimp, become a trophy for their endeavors. Tonka's welfare was in the best shape possible, but according to animal rights standards, he was being abused simply because he lived under human care in a private home.

The media, celebrities, and influencers worldwide have aligned with groups like PETA to push the narrative of animal rights. Most often, it is not from an uneducated point of view, but rather a financially influenced decision. Groups like PETA are known to pay celebrities thousands, even millions of dollars, to speak for the concept of animal rights. All the while, they violate all of the organization's core values by eating meat, owning pets, wearing fur, and much more.

What is disturbing about groups such as PETA, after raising over $72 million in 2021, PETA provided no funding support for the animals they "rescued." More disturbing, according to whistleblowers, PETA has an average "kill rate" of 71% annually, euthanizing most of the animals they rescue.

There is an expanded need for a focus on animal welfare. It helps to safeguard against breeding farms, improper animal brokerage, substandard care, and animal abuse. But when it branches into the realm of animal rights, it infringes upon the rights and dominion we have as human beings.

It is this distinction that has driven me to do the work I do each day for hundreds of animals under my direct care.

In 2019, my life shifted, and it was time to leave behind my corporate career path for my passion and purpose. During the last three years, I focused my experience in leadership, management, fundraising, speaking, and animal care to build an organization that focuses on expanded animal welfare while supporting the rights of human beings worldwide.

I founded an organization called Small Primate Animal Rescue of TN, or SPARTN. The focus is to provide long-term care, protection, and love for primates who have been neglected, abandoned, and abused. We have expanded into multiple locations as a sanctuary network and seek to provide stable homes and a modernized form of husbandry for the animals. Most of the animals we care for are primates that groups or individuals privately owned and have spent most, if not all, of their lives in direct companionship with human beings.

Part of our hope at SPARTN is to help develop an updated form of husbandry for primates and other animals that humans have directly raised. It is not healthy or developmentally fair to remove sentient animals, such as primates, from that direct interaction with humans. As we have seen in the past, when this happens, the grief and distress often result in their eventual death.

In the weeks and months ahead, my hope is to be able to inspire, educate, motivate and activate you to be part of a world that displaces the concept of animal rights and directs your time, resources, and attention to the need for expanded animal welfare.

If we do not work together, there is a future devoid of our right to share life with the animals we love.