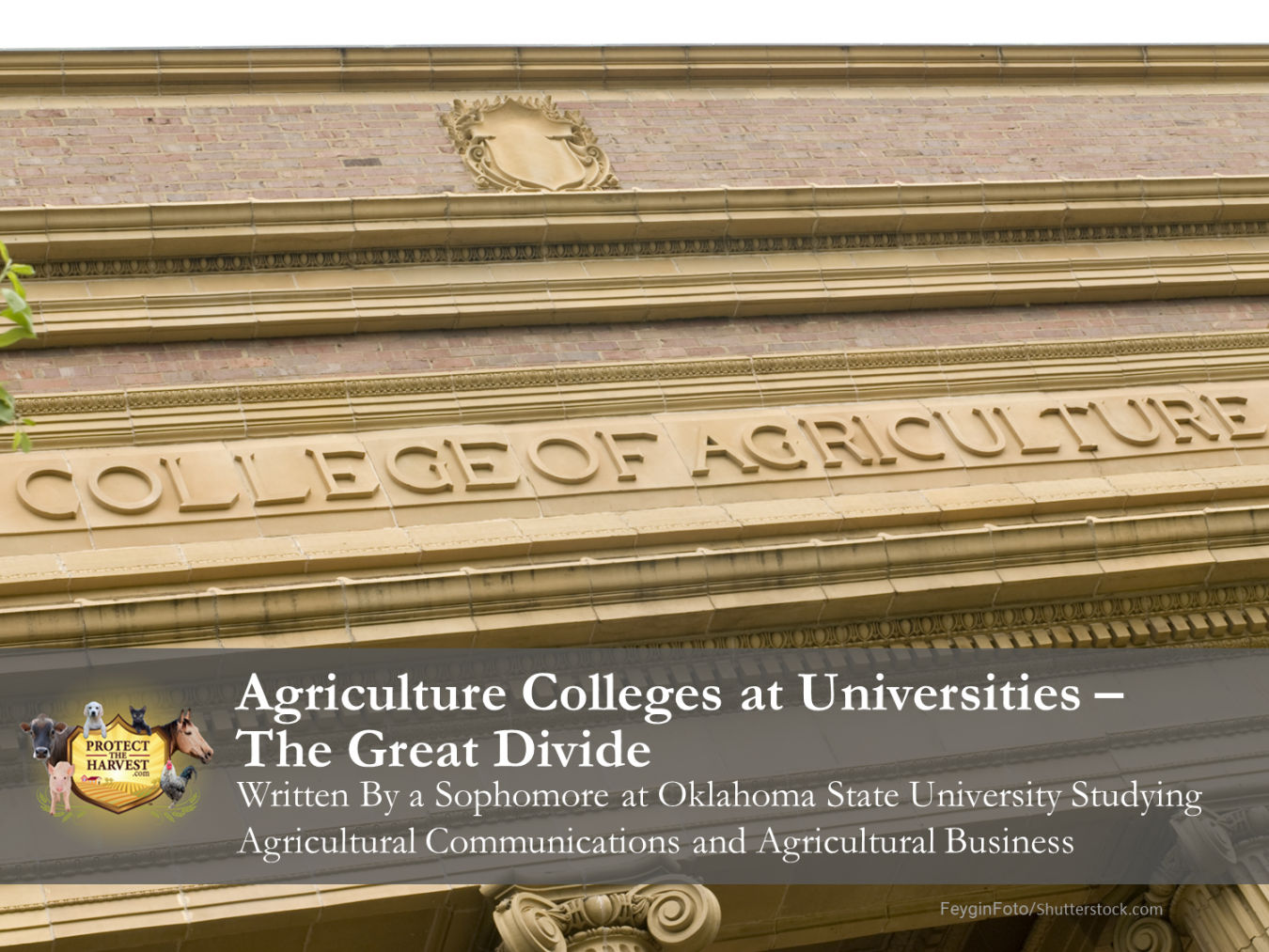 Land Grant Schools Seem to Have Forgotten Their Purpose

I eat, sleep, and breathe agriculture — as do many of my peers. However, agriculture is often forgotten by students at the university I attend. The same can also be said of the students at other universities which were founded to promote and support agriculture. What also seems to be forgotten as well are the morals, skills, and ideals that those in agriculture encompass and hold with them.

From the start of my higher education journey, I have observed an exceedingly clear gap between students whose interests fall under agriculture and those who do not. It is my opinion that this is made possible by allowing extremist groups and their false and negative connotations to perpetuate at the university level. I also believe that many of these negative and false perceptions about agriculture are started at universities which widen the gap that many can see throughout agriculture and non-agriculture industries.

I will never forget the day I realized that agriculture-based schools at the university level needed to do a better job promoting the principles upon which their institutions were founded. It was also clear that they needed to do a better job bridging the gap between students of every interest and department. This realization happened before I made my decision to attend Oklahoma State University.

The Great Divide – The Other Side of Campus

Before enrolling at OSU, I toured campus after campus looking to find my place in the higher education system. Every campus that I visited had a clear division between those who studied agriculture and those who did not. The first two universities I visited catered towards my chosen emphasis in agriculture from start to finish. I was grouped with students of similar interests which made conversation easy among peers. All was well until the conversation was mentioned about the “other” side of campus where the non-agriculture programs were and how it was dreaded among students to have to take classes there. It was almost as if the schools of agriculture had isolated themselves from the rest of the colleges at each respective university.

I was grouped with students from various backgrounds and interests at the last and final school. There is a chance that I was one of the only students interested in agriculture in my group. During the tour, we were walked through the impressive colleges that the university had to offer, from the state-of-the-art business center to the stunning college of architecture the programs seemed impeccable and so I was excited to see the school of agriculture. When it came time to look at the college of agriculture my tour guide brushed past it and dismissed it as “just another college” at the university. I distinctly remember another girl on my tour loudly asking, “If we go in are there cows in there.” The rest of the tour group, including the guide, laughed at the joke. I, however, did not find it funny. It just added to the ever-growing list of isolating comments made by those around me who did not understand agriculture. It was not until after my group tour was over and I met with the faculty in the agriculture college that I got any insight into what the agriculture program had to offer. Quite frankly it was a lot and in my opinion, the tour guide was dismissing a large part of the university’s history by brushing past the college of agriculture.

While my experiences differed, one thing was clear, there is a great divide between the colleges of agriculture and the rest of the colleges at every university I visited. This was a disheartening discovery. As students, we must do better about not keeping ourselves locked away from the rest of the student population. Time and time again I hear students complain that they have to advocate for agriculture to other students. I cannot help but think there is a possibility that the need for advocacy would dwindle if we were to open our doors to students of other interests.

On the flip side, there is a reason that students of agriculture have isolated themselves. Many have grown up facing backlash over agriculture on social media and even from people in their lives. I know both are true for me.
The easiest course of action seems to be to do our own thing within the schools of agriculture and not include the other colleges who have rejected us time and time again. Making us out to be the place where “cows are studied.”

The truth is, as members of these institutions, both faculty and students, we have contributed to this misinformation-filled gap. This predicament is not one group’s fault over another. It must be fixed if we have any hope of bridging the gap outside of and past the university system. We must first bridge it at the place where minds are impressionable. Where we, as students, are learning skills to further our society in every aspect, not just agriculture, and learning how to be productive members of society.

With that, I leave you with one final question:

If we cannot bridge this gap at a university level, how are we supposed to support those in agriculture past it and into the future of our ever-changing world?