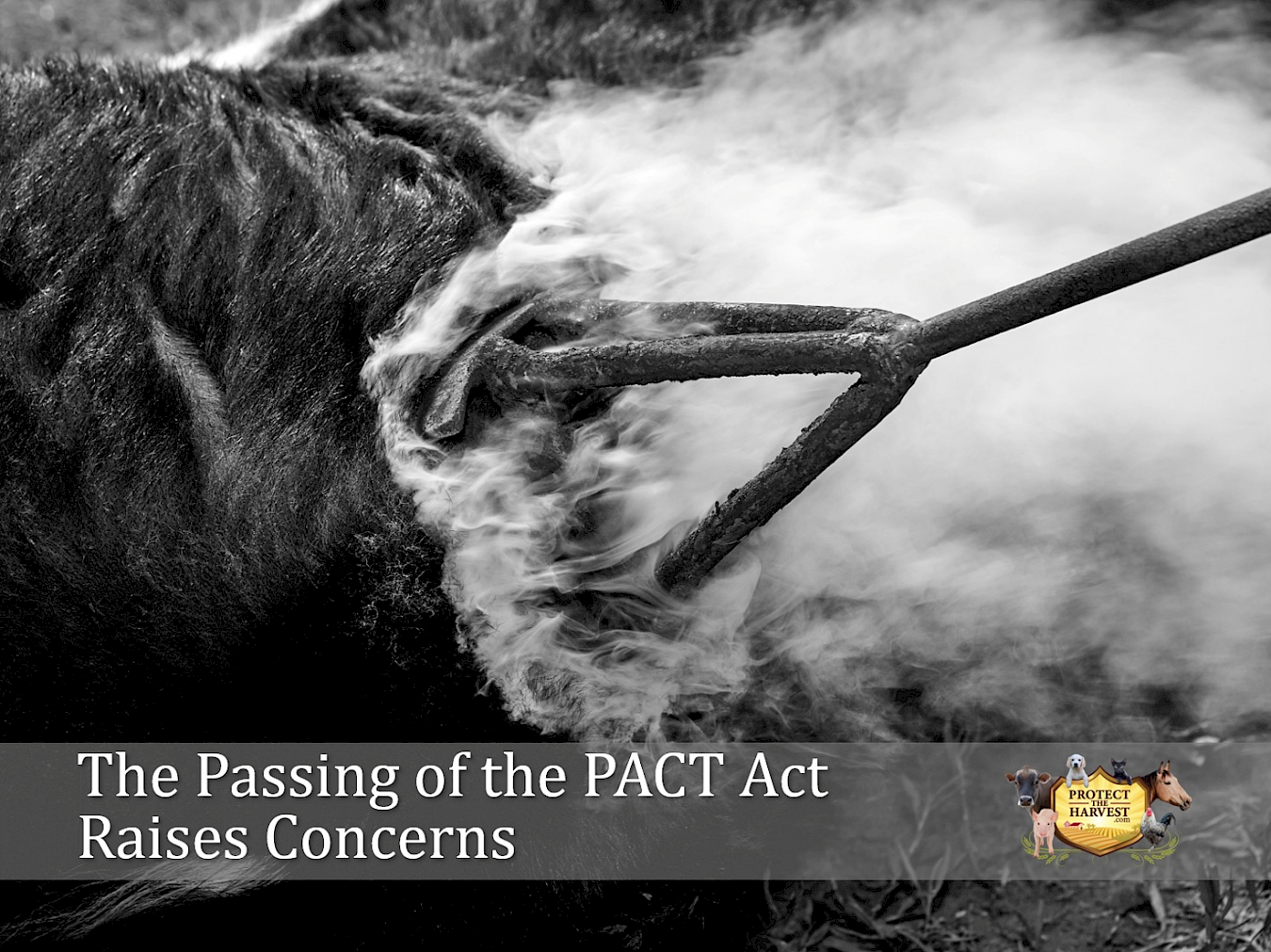 THE PASSING OF THE PACT ACT RAISES CONCERNS

We Appreciate Your Efforts to Reach the White House
President Trump signed the Preventing Animal Cruelty and Torture (PACT) Act into law Monday, November 25th, 2019. The animal rights groups behind this bill presented it in a highly deceptive way, so we knew it was likely to be signed into law. However, we hoped that the tens of thousands of emails, calls, and letters you sent would impact the signing decision. We truly appreciate each and every one of you that reached out to the White House to urge the President not to sign this Act into law.

While Protect The Harvest and other animal welfare groups are very concerned about this bill, we are not standing down in our fight against the animal rights ideology and agenda. It is important for American farmers, ranchers and animal owners to continue to feel empowered in your ability, and right, to have your voices heard in government. We ask that the signing of this bill does not cause you to lose faith in our government or faith in the current administration. Protect The Harvest will always work to protect the rights and freedoms of farmers, ranchers, sportsmen, and pet owners. We will not give up on our efforts to educate others of the consequences of the activities of animal rights and other non-governmental organizations, as well as their impact on animal welfare and our American way of life. We will continue to fight to ensure our American traditions continue for generations to come.

Protect The Harvest’s National Strategic Planner Warns of the Precedent This Will Set
Our National Strategic Planner, David Duquette, explains: “Once the rules are written, I will bet within weeks I will be at the steps of the White House with cases of perversion of this law. It only took days after Arkansas signed their own felony animal cruelty law that the regional director for the HSUS tried to put a woman in jail with 25 felony counts of cruelty for her 25 horses that had nothing wrong with them, this was supposed to be the “precedent-setter” for that law. We were able to prove she was innocent, but it was a severe financial burden and almost buried her”. We urge our followers to stay vigilant and reach out to us if someone you know is affected by the passing of this law.

The Group at the Signing of the PACT Act are Most Likely Not Trump Supporters
Whether President Trump and his advisors knew he was supporting the animal rights movement or not, unfortunately he validated these groups and their ideology and agenda. Those present at the signing included Kitty Block, President and CEO of the HSUS (and past PETA employee), Jack Hubbard, the COO of American Humane, Sara Amundson the CEO of the Humane Society Legislative Fund, and Marty Irby, the Executive Director of Animal Wellness Action, an organization founded by former CEO of the HSUS, Wayne Pacelle .
We can’t help but point out that the folks standing around President Trump during the signing of the PACT Act are not members of the base that helped to get him elected. In fact, they are likely Progressive Democrats who have fought against him at every single turn.
PACT Act Consequences
Now that the act has been passed, our concern is for the consequences of this law as rules are written. Rules are being written by the Department of Justice who may or may not know anything about animal care, while enforcement will be up to the USDA. As we outlined in our previous PACT Act articles, this law could have enormous implications on animal ownership and breeding in many ways. Below are two main concerns.
• Since this is an act instead of a bill, it can be easily amended in the future. A simple language change could make felons out of those now listed as exempt in (d)(1)(B-F) of HR724. Currently, slaughter for food, hunting, scientific research, protection of property, and euthanizing an animal are exempt. Imagine if they were a federal crime. The world would change as we know it.
• Our other main concern is one we have voiced from our very first article. What are the qualifications of those who will decide what is considered ‘customary and normal’ as it applies to exemption (A) for veterinary, agricultural husbandry, or other animal management practices? Considering the make-up of the group standing behind the president while he signed the act, we should all be very concerned about them positioning themselves to be our decision makers. It was the who’s who of the Humane Society of the United States and Humane Society Legislative Fund.

Overreaching Language Will Bite Those That Wrote It - Animal Rights Groups and Their Cruelty Videos Used to Collect Donations
The HSUS PETA, ASPCA and other animal rights groups are well known for writing, funding and marketing legislation packed with vague and overreaching language. The PACT Act is no different. Yet this time, it is the specific language in the PACT Act that will bite the creators of this bill. The PACT Act makes the filming of animal cruelty for financial gain a federal offense.
Sending undercover operatives to become employees at farms, ranches and breeding facilities with the specific intent of staging and filming animal cruelty and abuse is a basic move in the animal rights playbook. They even run advertisements on major employment platforms looking for undercover operatives, film makers and video editors with special effect and CGI (Computer Generated Imagery) experience. Numerous groups employ this tactic including the HSUS, PETA, ASPCA, Direct Action Everywhere, Mercy for Animals, Animal Recovery Mission (ARM) and many others.
If videoing and distributing videos of animal cruelty is now a federal offense, what are these animal rights groups going to do? How are they going to raise money since they have just officially made criminals of themselves? While we have major concerns about the PACT Act and its impact in the future, the fact that it will bite animal rights groups where it hurts them most, their bank accounts, is certainly not a disappointment.