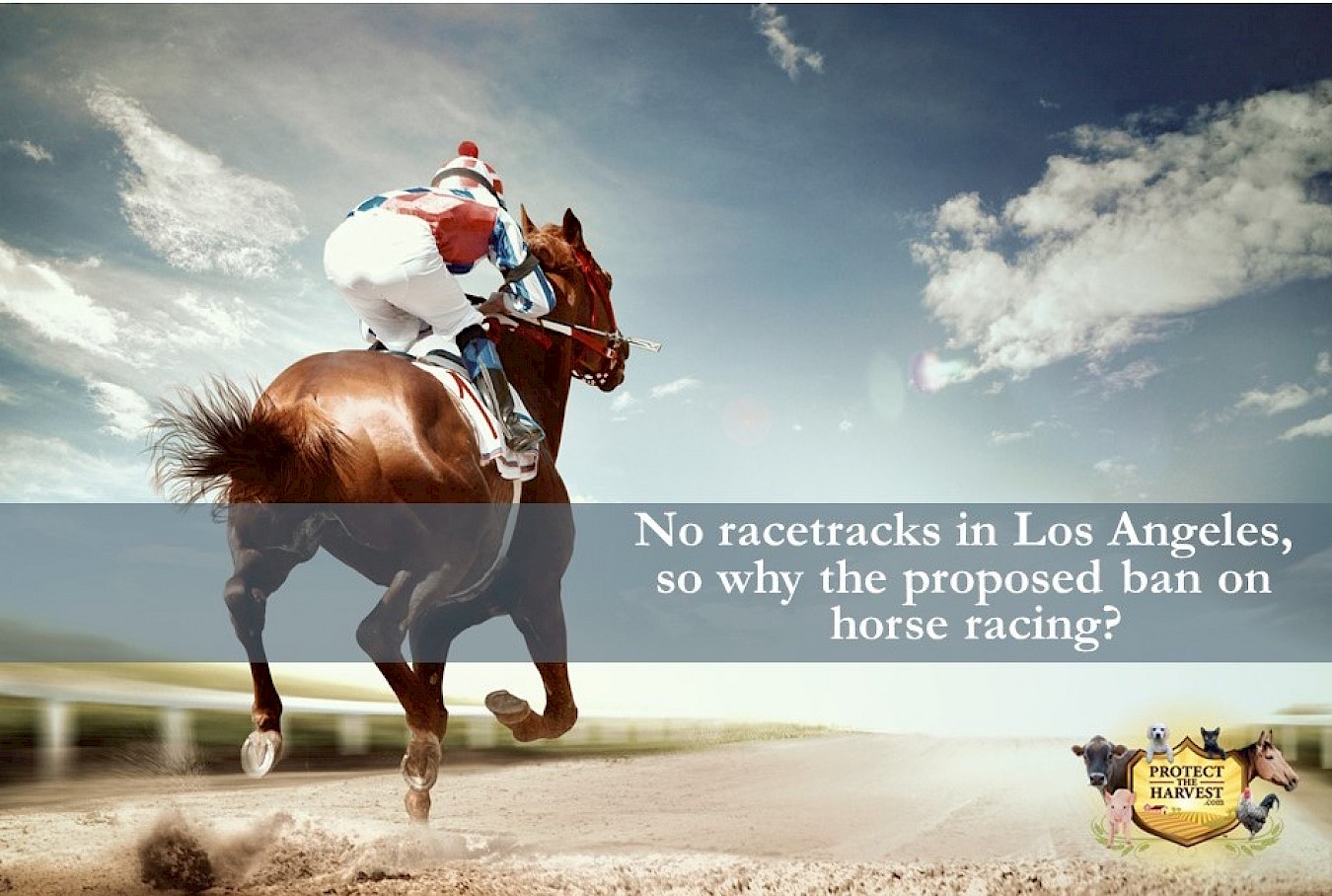 THERE ARE NO RACETRACKS IN LOS ANGELES, SO WHY THE PROPOSED BAN ON HORSE RACING?

A self-proclaimed animal rights activist on the Los Angeles Board of Animal Services, Roger Wolfson, is again attempting to push the animal rights agenda in Los Angeles City Government. At the July 23rd board meeting, he proposed first a city-wide ban on horse racing, then city government support for a statewide ban. He did not have a formal motion prepared for the meeting, in fact he furiously typed one during the meeting when he should have been listening. Needing a unanimous vote from the three attending Commissioners, the motion was not passed. Nevertheless, if he stays true to form, it will end up on the agenda again.

Imagine a room full of animal lovers, and in walks Wolfson and the animal rights agenda. He sows seeds of misinformation and demonizes a long-standing California industry to a group of people where few know anything at all about horses and even less about the sport of racing. He clamors for support, and he gets it.
Why is it important to take note of actions like this? Why should you inform yourself and understand the motivation? Wolfson himself, as he was proposing a motion to support a statewide ban on horse racing, even said it is symbolic in nature as there currently aren’t any horse races in LA.
In reality, the motivation behind actions like this are simple and show the dark underbelly of the animal rights movement. Think big picture. When a group is pushing an agenda, they need public support. So, they choose a large urban population, twist facts, and make their purpose seem credible. Therefore, making it easier to “sell” to a population that knows little to nothing about it. In this case with horse racing, the public doesn’t even have access to horse races in Los Angeles in order to learn about it or see it firsthand.

One needs to ask, has Wolfson himself ever seen a horse in person? He has a stereotypical Los Angeles type resume of television writing & producing. He has even practiced law some. However, he does not appear to be licensed in the state of California. There is no indication that he went to veterinary school or would have had the time to do so if he were truly interested. It also seems as if he would have had little time to dedicate to learning much about animal welfare, especially livestock. Yet, because he is sitting behind the table and appointed to the LA County Animal Services board by the Mayor, he holds a position of authority and perceived experience.

Animal rights activism is not new for Wolfson. He has a track record for pushing both bans and ideas that are in lockstep with the animal rights ideological agenda. In 2017-2018, against the advice of the veterinarian in charge of the health and welfare of Los Angeles shelter animals, and other well-respected veterinary specialists, Wolfson aggressively attempted to get a motion passed that would restrict the diet of Los Angeles shelter dogs to only vegan dog food. The continual and ongoing saga caught nationwide media attention and rightfully ended up being an embarrassment to both Wolfson and the City of Los Angeles. He pushed that motion despite scientific proof provided by the California Veterinary Medical Association, showing a vegan diet would be detrimental to dogs’ health. Regardless, he didn’t seem to care because that fact did not fit his agenda then, just like real facts don’t fit his agenda now.
Along with shelter dogs and racehorses, Wolfson also has rodeo in his crosshairs. He encouraged the board to pass a motion supporting a ban on rodeos in the city. The proposed ban on rodeos has yet to be reviewed by the city council.

Here are some other points to consider:

During the course of our research into Wolfson and the proposed horse racing ban, we uncovered the following information about the connections between Los Angeles Animal Services and animal rights groups. It’s no surprise that that a couple of the biggest radical animal rights groups are jumping in against horse racing. The ASPCA, PETA, and an animal liberation fringe group, “Horse Racing Wrongs” are all involved.

Here’s a snapshot of what we discovered: 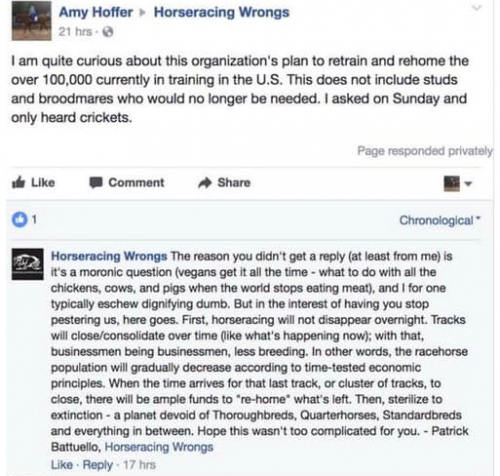 Horse & Racing Facts for the State of California

Horse racing is an event that is enjoyed by millions of people worldwide. It is a part of world history and culture. It is also a sport that is collectively making important strides to improve from within and should have the freedom to do that. Animal rights groups have fabricated untruths about the horse racing industry and have spread this misinformation far and wide via their heavily funded marketing campaigns. Because of this, we believe it is important to share the facts with the public:

Insider’s Opinion from a Track Photographer and Registered Veterinary Technician in Equine and Small Animal Practice:

Mornings are hectic on the backside. Grooms start at about 4 am, taking standing wraps off, checking legs, checking to see if the horse ate its entire dinner. The horses are groomed, tacked, then they begin the morning workout period. After the track is renovated by the tractors, the first 10 minutes of a set is for those horses breezing, then they begin the morning gallops. Sometimes a jockey will breeze the horse, other times it’s an exercise rider. Those are hired by the trainer, though smaller trainers may share the same riders. Even though the pace is fast and hectic, there’s a rhythm about the barn and a cheerful vibe. Workers greet other workers, telling jokes, greeting visitors with smiles. It’s a happy place.

A barn will use one of the track veterinarians for routine care and to do pre-race checks about 3-4 days prior to a race. The state vet will perform a pre-race check 1-2 days prior to the race then on race day, a different vet does the vet check. For workouts, the trainer must put in writing that a specific horse will be doing a timed workout. That horse then has to be checked by the veterinarians as well. If a horse is coming off a layoff, there will be increased scrutiny to make sure the horse is okay to work.

Racehorses, because they’re handled from a very young age, learn their manners quickly and will stand quietly for almost anything. Farriers put racing plates on the horses in the middle of the barn aisle, while the groom holds the horse. Barn veterinarians will do exams, and scope horses in that same barn aisle without needing sedation because the groom is with the horse. The groom is the horse’s best friend.

Most horses are curious and will stick their heads out of their stall to see if there might be a stray carrot or horse cookie in your pocket. When the barn quiets down, they will sometimes stretch out flat in their stall and take a nap or turn their hindquarters to the stall door as if to say, “don’t bother me”.

There are two pieces of current legislation surrounding horse racing. They are deserving of their own article, so we won’t cover them in depth here. We encourage those that are interested to look into them.

California SB 469 – This bill gives the California Horse Racing Board authority to immediately suspend licenses to protect the health and safety of horses and riders. This bill was signed by California Governor, Gavin Newsom, in May 2019.

Horse Racing Integrity Act (H.R. 1754) – Proposed in March 2019 – A concerning aspect is that the member list is full of animal rights groups. This is disappointing as there is also a lot of racing industry support for the Act. The bill would offer a new set of rules, testing procedures, and penalties that would replace the current disconnected regulatory systems that govern horse racing’s 38 jurisdictions.

What can you do:

Keep in mind that first and foremost animal rights groups believe there should be no animals in human hands, none. As we have shared in other articles, they take methodical and gradual strides to achieve this goal, using a ‘divide and conquer’ plan of attack.

This situation is an example of that plan. As we have shown in this article, they are working very hard to insert themselves into the horseracing industry. They are presenting themselves as knowledgeable authorities on both the sport and the animals. We know that this is their goal. PETA has had a long-running employment ad on Indeed looking to hire a person they can use to influence the industry.

Secondly, animal rights is a business and they are in the business of fleecing donation dollars from animal lovers. Exploiting events like horse racing, rodeos, and the like is good for business.
Horse Racing has been an animal rights target for decades. Over the last several years we have written multiple articles about animal rights groups targeting performing animals. There are a wide range of articles available on our website including topics like circuses, rodeos, horse shows, and dog shows.

Protect The Harvest supports performing animals of all kinds, as we know, the vast majority of owners and trainers care deeply for their animal’s welfare, work by their sides every day, and enjoy each other’s company. These animals foster the next generation of animal lovers and that is important to preserve.

Would you like to support California Horse Racing?
Here is an organization to look into:https://www.wesupporthorseracing.org/