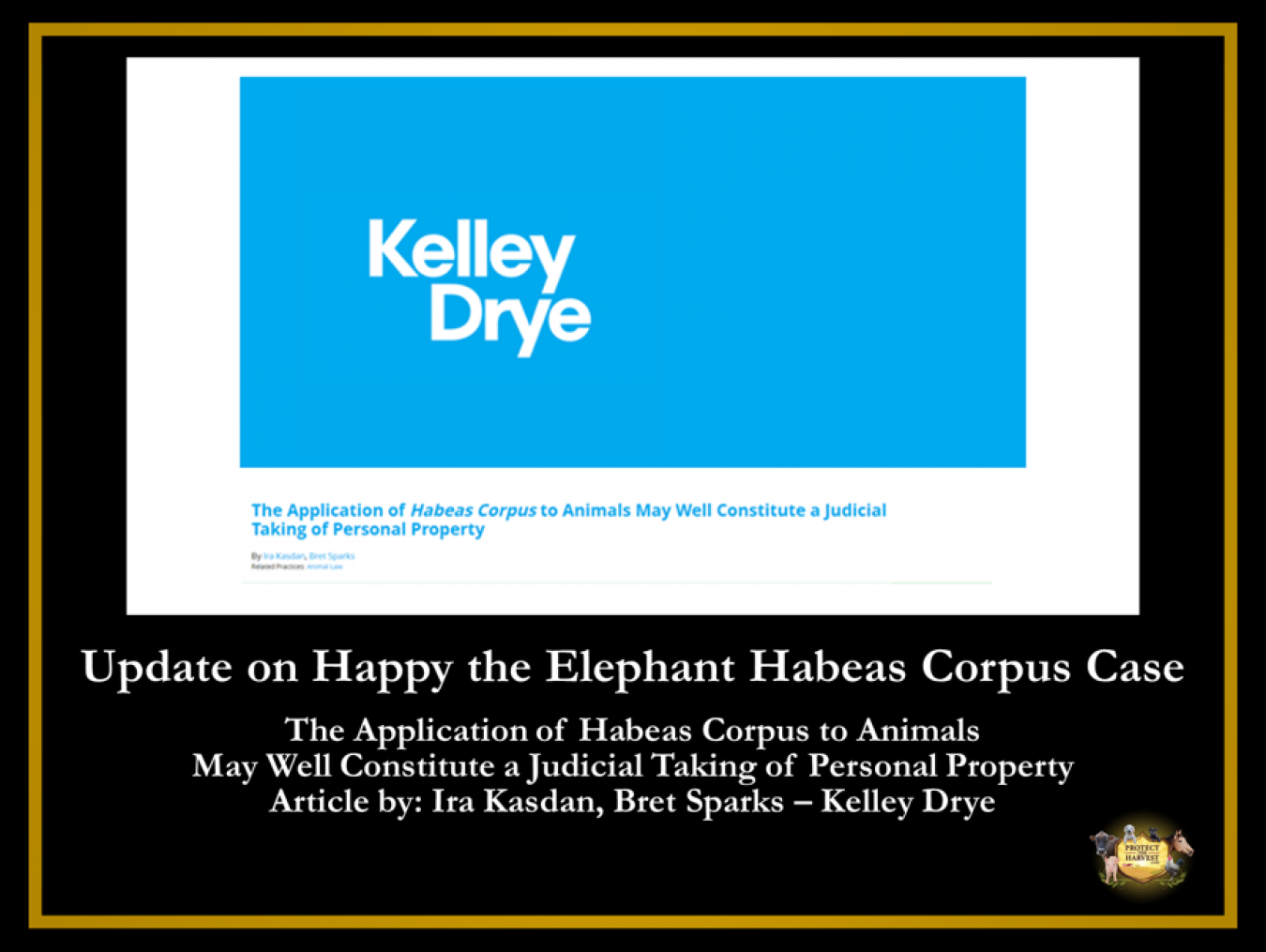 Earlier this year, the Nonhuman Rights Project (“NRP”) filed an appeal to New York’s highest court, arguing for the release of Happy the Elephant from the Bronx Zoo. The basis of NRP’s case, which was rejected by both the New York Supreme Court and the New York Appellate Division—First Department, is that Happy is being kept by the zoo “against her will.” In its brief, NRP requested that the Court of Appeals liberate Happy under a legal right known as habeas corpus, which historically has been used to grant freedom to people who truly were unlawfully incarcerated, such as slaves and illegally detained prisoners.

This is not NRP’s first attempt to misemploy one of the most sacred and fundamental human rights in our legal system. In 2018, the group sought (and was denied) a writ of habeas corpus for two chimpanzees in New York. It more recently lost a similar case on behalf of elephants in Connecticut. NRP has also publicly stated that it envisions more lawsuits in the future, with hopes of “freeing” a wide variety of animals. Should NRP succeed on its latest appeal, habeas corpus could be invoked for all animals that activist groups believe are being “kept against their will,” including livestock and household pets.

Beyond its degradation of habeas corpus, there are a host of problems associated with NRP’s request, most of which were argued before the lower courts. For starters, Happy is well-kept by her owners at the Zoo. Moreover, a writ of habeas corpus wouldn’t actually provide Happy with any form of “autonomy.” Rather than releasing her back into the wild, NRP has requested her transfer to another enclosed location, a “sanctuary,” under someone else’s watch. In essence, Happy would be no closer to true freedom than she is now.

What perhaps is most disconcerting about NRP’s argument, though, is the fact that Happy is not a human being with inherent or established legal rights. Instead, Happy (and any privately-owned animal) is classified as personal property under centuries-old New York State law. New York courts have long held that the sole purpose of a habeas corpus proceeding is to inquire into the imprisonment or restraint of a person, and that habeas corpus cannot be used to seek a release of property. Given that New York law unequivocally classifies animals, like Happy, as personal property, there is no legal foundation for granting NRP’s request.

Nevertheless, NRP retains a sliver of hope. Although NRP lost its chimpanzee appeal to the Court of Appeals on a procedural ground, Judge Eugene Fahey issued a concurring opinion that seemed to grant some credence to NRP’s mission. Yet, if the Court were now to grant NRP’s request for Happy, would it not constitute an unlawful taking of the Zoo’s property? In an amicus brief submitted to the Court of Appeals on behalf of several parties led by Forrest Lucas’ non-profit organization, Protect the Harvest, we argued this very point.

The Fifth Amendment to the U.S. Constitution prevents the government from taking private property without just compensation. While litigation over violations of the “Takings Clause” have traditionally concerned actions by the legislative and executive branches of government, case law supports its application equally to the judiciary.

The judicial takings theory has garnered significant publicity following Justice Scalia’s decision in the 2010 landmark case Stop the Beach Renourishment, Inc. v. Florida Department of Environmental Protection. In his plurality opinion, Justice Scalia ruled that the Takings Clause prohibits courts from eliminating an “established property right” without awarding just compensation to the owner—just as it would prohibit similar legislative or executive actions. In the years following Stop the Beach, scholars have argued over the legal merits of a judicial takings claim. While some believe that applying the Takings Clause to the courts would stifle efficacy and objectivity of judicial decision-making, Happy’s habeas corpus case provides a unique and well-suited opportunity to demonstrate the validity of this legal theory.

Kelley Drye’s amicus brief explained the inherent flaws underpinning a court’s drastic departure from established property rights. First, courts lack the authority to unilaterally redefine well-established property rights. In its brief, NRP requested that the Court of Appeals apply habeas corpus to Happy under its judicial authority to establish “new” common law regardless of statutory enactments. While courts are provided some leeway in that regard, Stop the Beach made clear that common law may not be used to usurp long-recognized principles of property law. Applied here, the Court of Appeals cannot uproot the Bronx Zoo’s property rights that clearly classify animals like Happy as personal property.

Second, even if courts could change habeas corpus law to apply to animals, courts still are not permitted to order the transfer of one person’s private property to another, whether for public or private use. In the case of private use, courts are prohibited altogether from such a transfer when the property rights are previously established. In this instance, the Zoo indisputably is the sole legal owner of Happy.

And even if the transfer of Happy from the Bronx Zoo is deemed to be for a “public purpose” (which NRP has never argued), courts lack both the authority and the resources necessary to justly compensate the Zoo for its loss. Only the legislature, as controller of the State’s purse strings, can authorize the payment of such funds.

None of the above means to imply that Happy, or any other animal, should be treated simply as a “thing.” Happy and all animals must be well-maintained and cared for. It does mean, however, that Happy is not a “person” subject to habeas corpus.

This latest appeal in Happy’s case could have significant ramifications for animal ownership rights throughout the country. While the same arguments made in the lower courts may be enough to defeat NRP a third time, this novel judicial takings claim theory serves as a final line of defense for established property rights in this or any future case NRP may bring to “free” animals.

Mr. Kasdan is a partner in the D.C. office of Kelley Drye & Warren LLP. Mr. Sparks is an associate in the firm’s Houston, Texas office.