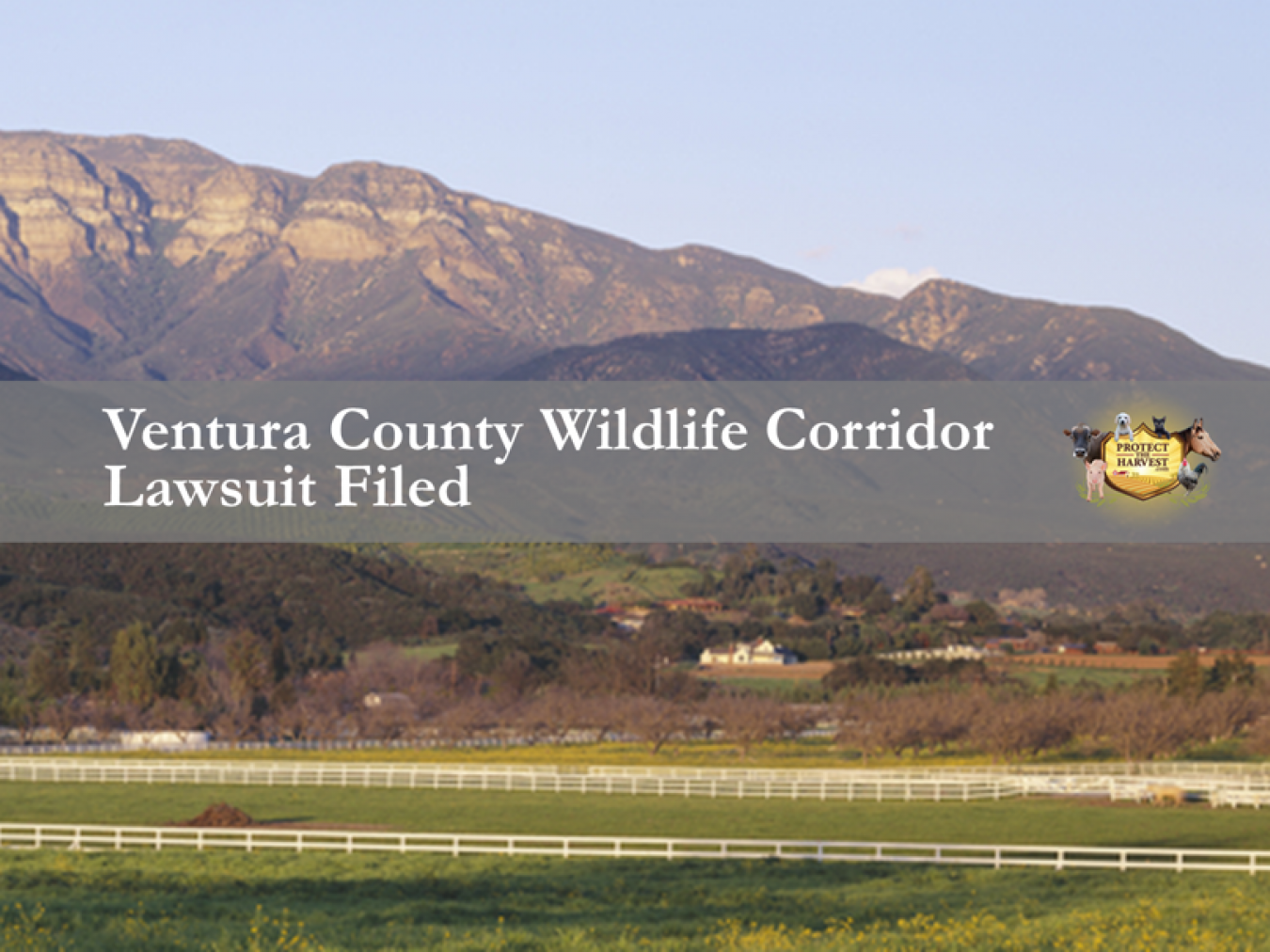 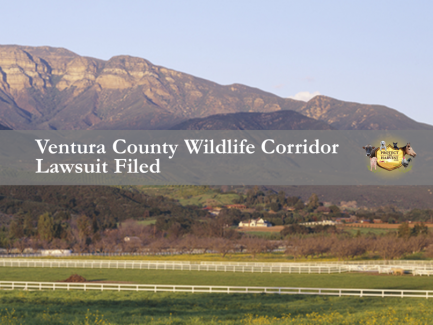 Lawsuit Filed by The Ventura County Coalition of Labor, Agriculture and Business

The Ventura County Coalition of Labor, Agriculture and Business (V CoLAB) filed a suit in in Superior Court in the County of Ventura asking the Court to set aside the County's 3-2 approval of the Wildlife Corridor zoning ordinance.

The reasons for filing suit are outlined as follows:

• NO ENVIRONMENTAL REVIEW - The County made the erroneous and legally unsupportable determination that the Ventura County Wildlife Ordinance is exempt from the California Environmental Quality Act (CEQA) review. As a result, the Wildlife Corridor Ordinance has the potential to cause significant environmental impacts, unintended consequences, and negative effects to property owners throughout the County.

o A California Environmental Quality Act (CEQA) review would have provided the County’s decision makers with a scientifically sound and accurate basis upon which to protect wildlife movement and corridors.

• INCREASED THE RISK OF DEVASTATING WILDFIRES - The Ventura County region has a long history of severe wildfires. In the past two fire seasons, 383,000 acres of wildlife habitat burned in the three fires. Over 72,000 acres were within the designated corridors. The entire region was devastated by these recent fires that affected homes, businesses, communities, habitat, and even the very wildlife that the Ordinance is designed to protect. The County’s refusal to study the environmental impact of the Ordinance restrictions to fire hazards, is a tragic oversight.
o Over 119,500 acres of the overlay zones (73% of the total Ordinance) are within state designated Fire Hazard Severity Zones. The Wildlife Corridor zoning ordinance places limitations on brush clearing in these areas. These limitations will exacerbate wildfires that threaten both humans and wildlife.

• USE OF OUTDATED INFORMATION - In constructing the ordinance, the County relied on outdated studies over 13 years old, with no updates. This resulted in inaccuracies and problems with how the boundaries of the overlay drawn.

• HIGHLY RESTRICTIVE OVERLAY ZONES WERE CREATED WITHOUT SCIENTIFIC BASIS – Particularly, the County arbitrarily created three even more restrictive “critical zones”, with no basis in fact or science, identifying properties that they long coveted to be parkland and trails. Only later did the County attempt to generate a scientific justification that never materialized.

• OVERLAY ZONE BOUNDARIES WERE ADJUSTED DUE TO POLITIAL PRESSURE AND FAVORITISM – For some Ventura County landowners, the County granted a last minute pass by removing specific parcels from the overlay zone in neighborhoods in Santa Rosa Valley and Oak Park. CoLAB believes this was due to political pressure from area residents. These parcels are within Supervisor Linda Parks’ Municipal Advisory Committee jurisdiction and the removal has no scientific basis as it is in one of the narrowest parts of the corridor.
o As this removal process was not offered to any other areas of the County, this is a clear violation of equal protection and due process and a stark example of the County’s arbitrary and capricious decision making while constructing this ordinance.

• APPEAL PROCESS REMOVED - Ventura County’s own Planning Commission recommended creating an appeal process “for resolving the inevitable complications of individual properties and have mechanisms for revisions of the program.” Unfortunately, this was rejected by the County Board of Supervisors, leaving the only option for even minor requests as an expensive and lengthy process that will be out of reach for most people.

• THE ORDINANCE WAS DRAFTED AND ENACTED IN A MANNER CONTRARY TO THE LAW - Ultimately, rather than taking the required time to study the issues and generate an ordinance that would actually address the objectives of the County with regard to wildlife movement and habitat protection, the County instead hastily drafted and enacted an Ordinance in a manner contrary to law that does not even accomplish its desired objectives.

• DEVALUED LAND AND INCREASED COSTS – The Wildlife Corridor Ordinance passed by the County Board of Supervisors includes unreasonable and unlawful restrictions, increasing costs and devaluing land of affected Ventura County taxpayers and landowners.

Statements from CoLAB Attorney and President

"I've never seen regulations affecting over 160,000 acres of land be enacted without any environmental review whatsoever. Relying on obscure exemptions to California's environmental laws in a regulation of this magnitude is highly unusual. The regulations are going to have a serious negative impact on the ability of property owners to use their land. It's a shame that the County would do something like this without even conducting the proper studies to ensure that the regulations achieve their intended purpose"

“We have worked for years offering reasonable solutions to the onerous limitations proposed in the Wildlife Corridor Ordinance that is now being forced on citizens of Ventura County. Regardless of how advocates of the ordinance spin the facts, the administrative record holds the truth and we will be using that record to fight this overreach of local government.”

What many people are not aware of is the fact that in the mountains and hills behind Ventura, and stretching for 220 miles from Northern Los Angeles County to Monterey County sits the Los Padres National Forest, encompassing almost 1, 750, 000 acres of which 48% is designated as National Wilderness Areas. This new corridor area proposed in Ventura county, will not protect wildlife further, instead it will place significant restrictions and regulations on land owners, including farmers, ranchers, and horse enthusiasts. Essentially the Wildlife Corridor Ordinance is a conservation easement with no compensation to land owners. It does not provide any allowances for the individual needs of families who own and pay taxes on Ventura County properties. The limitations adopted for fencing, lighting and brush clearance will cause more conflicts with wildlife in residential communities, endangering predators and increasing fire danger.

Link to Petition for Writ of Mandate and Complaint: http://colabvc.org/wp-content/uploads/2019/05/2019-04-25-Verified-Petition-for-Writ-of-Mandate-and-Complaint-CONFORMED.pdf