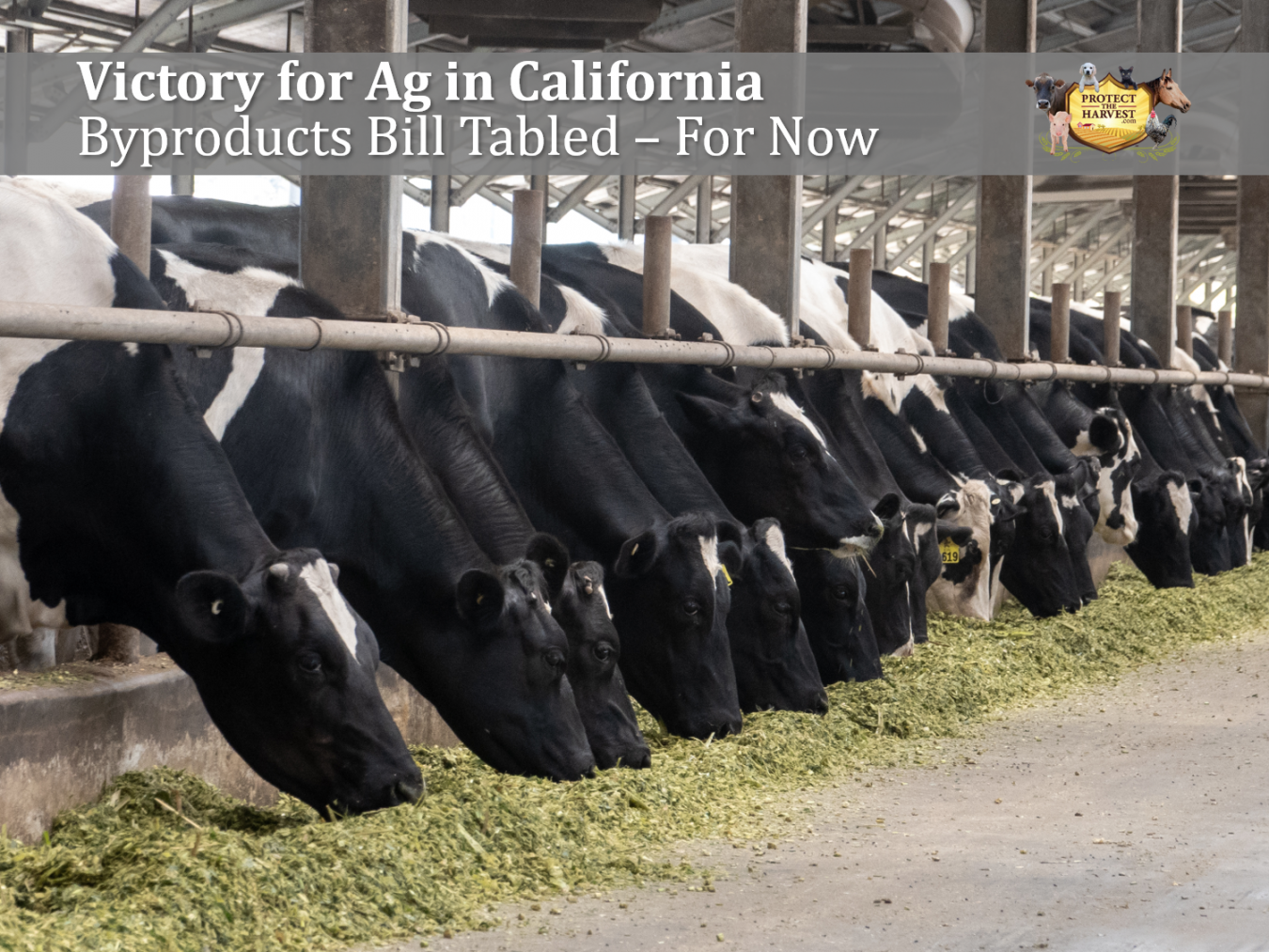 VICTORY FOR AG IN CALIFORNIA BYPRODUCTS BILL TABLED – FOR NOW

California producers, were you aware of California Assembly Bill 2959? It was a bill which sought to change an existing law that dictates where certain food waste or food byproducts can be distributed. More specifically, this bill intended to force the unfranchised hauling of organic byproducts from grocery stores and restaurants to be subjected to the same franchise agreements that municipalities now have with select companies to remove garbage. Franchise agreements are binding legal contracts enforced at the state level.

Opponents Include Large Ag Organizations
On the other hand, this bill was largely opposed by agricultural groups who were concerned that this bill would effectively end the use of organic byproducts by livestock producers for feed and bedding.
Opposing organizations included:
• California Farm Bureau Federation
• Almond Alliance of California
• Association of California Egg Farmers
• California Advanced Biofuels
• California Grain and Feed Association
• Western United Dairymen
• Several dairies and 19 individuals

We are extremely proud of the organizations listed above as they fought hard to get this bill tabled and were successful in doing so. In a statement published by the California Farm Bureau on the online publication AgAlert, Taylor Roschen, a CFBF policy advocate shared "We are pleased to see that restrictions on livestock feed, through AB 2959, will no longer be pursued this year. As the state works toward managing its organic waste, our farms, dairies and ranches provide an invaluable service. We look forward to continuing to highlight that work."

Byproducts Utilized in Animal Feed
The reason this bill received such strong backlash is because utilizing organic food byproducts in animal feed is an extremely sustainable way to close the food cycle that often includes a lot of waste. Dairies in particular, are well known for having nutritionists formulate the perfect ration for each cow at every stage of her life whether she be freshening, early in her pregnancy, later in her pregnancy or at maintenance. These specific food rations often incorporate fruit and vegetable rinds, tomato and grape pomace, nut hulls, milk byproducts and bakery waste so that that food is used rather than discarded in a landfill.
In the AgAlert update referenced above, they interviewed Frank Konyn, a Dairyman from Escondido, California who said: “If there wasn't operations like myself, that is material that would be ending up in the landfill. It all gets upcycled. ... It gets fed to cows. The cows produce milk. That milk gets shipped out into various dairy products—butter, cheese, ice cream, yogurt, chocolate milk, etc. That's how that waste product gets transformed back into human, edible food."

Who Would Have Benefitted from This Bill?
It is very obvious that waste haulers would have benefitted from this bill while agriculture and livestock producers would have suffered. The bill would have made it so that grocery stores and restaurants did not have a choice in how their food byproducts, food waste, or expired food was handled. It would have made it so that this type of food waste or excess food would have fallen under the purview of the city, county, or other governmental jurisdiction. Instead of giving away, donating, or selling their excess food or food by products, grocers and restaurants would have had to contract with local waste hauling authorities to have them picked up.
Only the franchise companies with licenses issued by local municipalities would have had the authority to haul these products.

Why Was This Change Being Proposed?
Even though landfills are being mandated to reduce their volume, many seek organic byproducts because it helps compost buried waste. Under the existing law (the Integrated Waste Management Act) 75% of solid waste is mandated to be diverted away from landfills in order to reduce green house gas emissions. Waste companies want to change this.
If this bill passes in the future, waste companies will charge the grocer or restaurant owner to remove their organic waste and move it to a new location. It will allow them to divert the waste to their own landfills, composting businesses, or other contracted arrangement. If the waste hauler is also making compost they will then also charge for it again when they sell the compost back to the consumer. It will allow the waste hauler to potentially make money at both ends. Either way, it would allow garbage companies to haul larger loads from restaurants and grocery stores, ultimately creating a situation where they can make more money by charging for larger loads, meanwhile farmers and the animals that benefit from utilizing food waste would lose out.

Bill Would Have Harmed Food Banks
Agricultural groups weren’t the only ones voicing concern over this bill. Restaurant owners and grocers also opposed the bill because it would have mandated where they could send their byproducts or unused food. Many are proud to be a part of the cycle that repurposes unused or unwanted food. We know that utilizing organic byproducts in livestock feed is a huge win for producers, the animals, the environment and the consumer. However, animal feed isn’t the only option. Some food, whether it be unused, imperfect, or leftover goes to food banks to feed those in need. This bill would mean that the flow of food toward the needy would end as well.
Our organization has always advocated for the safe and affordable access of food for everyone. This result of redirecting valuable food items to disadvantaged families, whether it is intentional or not, was extremely concerning to us.

The Bottom Line
We are proud of the agricultural groups, restaurateurs, and grocers who stood up in opposition of this bill. For some time, we have been sharing the message of “we must stand united” in order to protect agriculture and our rural way of life. In this case, we have witnessed what can happen when groups stand together and speak up. Their doing so kept a concerning bill from coming to fruition this year. We must warn that like we have seen with other bills that have a great benefit to certain interest groups, we are certain that the waste companies will likely reintroduce the bill the following session.
Therefore, we must remain vigilant and pay attention to when it makes its rounds again.

Prev Article
USARK Alert Re: Wildlife-Borne Disease Prevention Act
Next Article
Protect The Harvest at Art of the Cowgirl - Ranching Life and Family