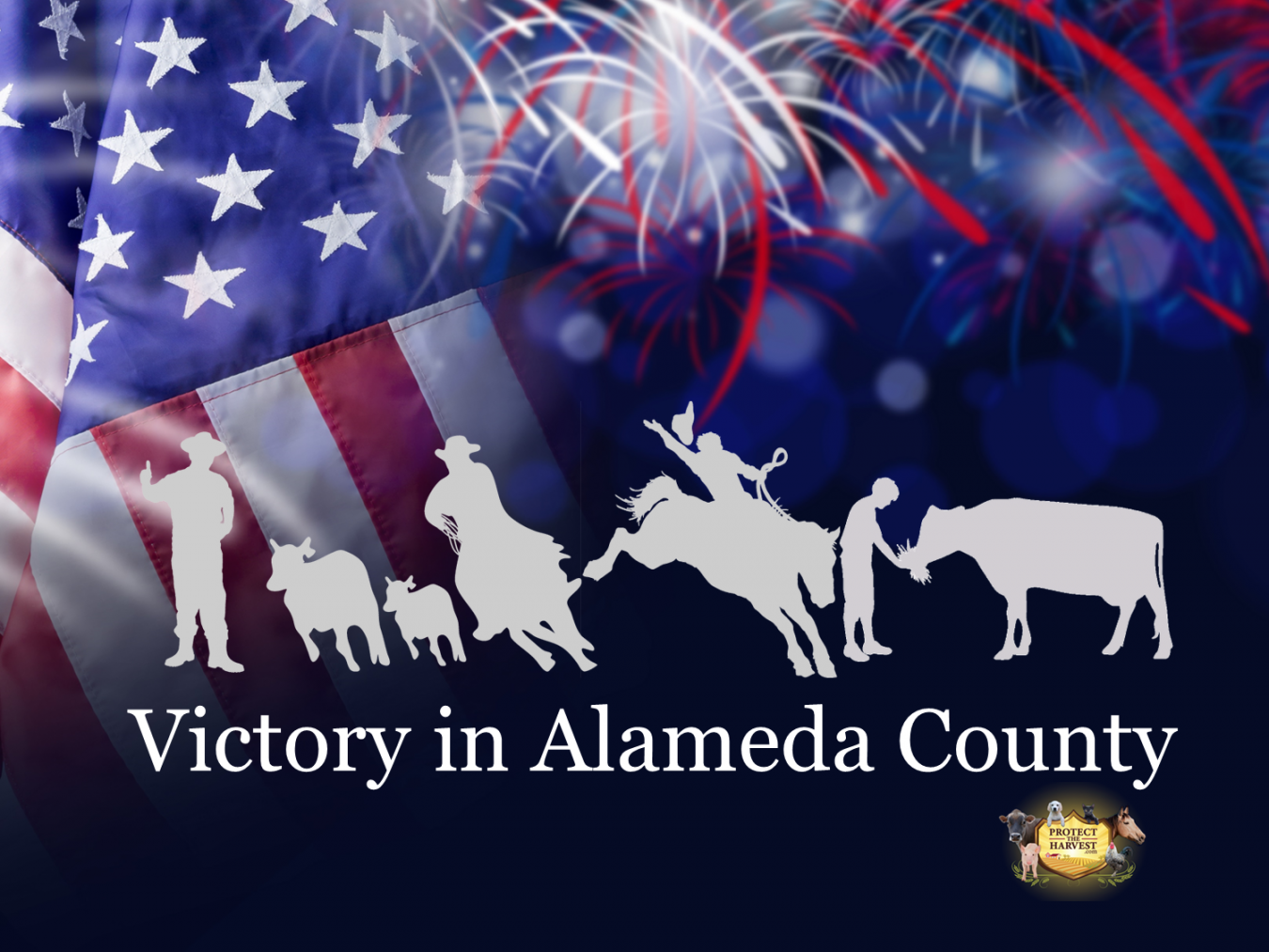 Proof that Standing Up Works

In a vote on September 20th, 2022, Alameda County’s Board of Supervisors ( California ) voted to strike out the proposed ordinance language that would have banned rodeo and other equestrian activities as well as common animal husbandry practices for livestock production. Instead, they chose to prohibit a ranch rodeo event “Wild Cow Milking” in their county.

This is a victory for animal welfare and food security, and a sharp redress for animal extremist groups like DxE who are vying to end animal agriculture and animals in human care.
The Alameda County Agricultural Coalition and its supporters were present and very successful in informing and educating the county supervisors about the animal welfare practices in Professional Rodeo Cowboys Association (PRCA) rodeo events as well as livestock production and its practices.
According to the two supervisors who penned the ordinance, Supervisor Valle and Supervisor Brown, banning rodeo was never their intent (although banning the use of the actual equipment implements in rodeo, equestrian activities, and livestock production clearly results in a broad-sweeping ban).

In the end, Supervisor Valle made the motion to strike all language referring to using straps, ropes, and spurs and keep the language to ban wild cow milking.

Not surprisingly, Supervisor David Haubert, whose district covers most of the agricultural area of Alameda County, objectively expressed the fact that there were already state and federal laws prohibiting animal cruelty. He expressed that he listened to both sides, and that straps, ropes, and dulled spurs were widely accepted across the country. He mentioned that wild cow milking is very controversial, but he discovered less than 0.1% of animals were injured, and that there were many regulations. He mentioned that there was a lot of rhetoric including false statements that cows were wrestled to the ground. He stated that he asked a lot of questions about why a beef cow be milked and was educated that beef cows suckle their calves and used to it.

Supervisor Haubert then eloquently stated that he found the comparison of wild cow milking and rodeo events to rape to be detestable. “To actually suggest that rodeo events are rape is, I think, repugnant in itself. To those people who have been raped, I apologize that you have to even listen to that. It seems that some people will say anything, or do anything, to get what they want.” He went on to say, “And I’m not quite sure exactly what that is. Some people, as it was mentioned earlier, think that horse riding itself is cruel; that having a dog on a leash is cruel; some people think that eating meat is cruel to animals. And I think that some people would see that killing rodeos as one step closer to eliminating meat.”
Supervisor Haubert continued by saying that in Alameda County they had the ability to make a lot of laws and that their mission was to protect vulnerable people by offering medical care, food for vulnerable families, public health and safety.
He concluded by saying, “I think we should prioritize…this. I wish that we had 5 hours of public comment on homelessness, we could make a lot of progress then.”

Interspersed amongst the public commenters were members of the group Direct Action Everywhere (DxE), known for their criminal antics of farm invasions, criminal trespassing, and theft. They call these actions “open rescues.” These activities violate biosecurity rules on ranches and farms and put animals and humans at risk of illness. This group also frequently participates in actions where they cover themselves in fake blood to protest the sale of meat products, blocking dairy and meat aisles in grocery stores, and berate innocent shoppers.

Supervisor Brown, District 3, was also clearly opposed to rodeo events. In his comment, he stated, “I just want it to be on record that I value the ranching community in Alameda County, even though I’ve taken on these issues in support of humane treatment of animals.” He went on to state “this ordinance was never intended to affect ranchers.” Since he states he values the ranching community in Alameda County, we recommend Supervisor Brown spend time at farms and ranches in the county. We also recommend he spend time at the rodeos so he can see for himself the care and attention given to rodeo livestock. Doing this will also illustrate how language penned by animal extremists constitutes egregious overreach.

The participants and groups who banded together won the day by informing and educating the supervisors on how rodeo events and livestock production practices are closely intertwined. They presented facts as opposed to rhetoric to support their case. Rodeo is still allowed in Alameda County, and so are equestrian activities and common animal husbandry practices in livestock production.

We hope everyone celebrates today and can see how standing up will make a difference. However, we encourage everyone to understand that animal extremists are relentless in their goal of spreading their ideology. They targeted Alameda County last year and succeeded in banning mutton busting – a rodeo event enjoyed by small children. This year they succeeded in banning wild cow milking. What will they target next year? Like always, we will keep a watchful eye and help to support those who are pushing back against the animal extremist ideology.