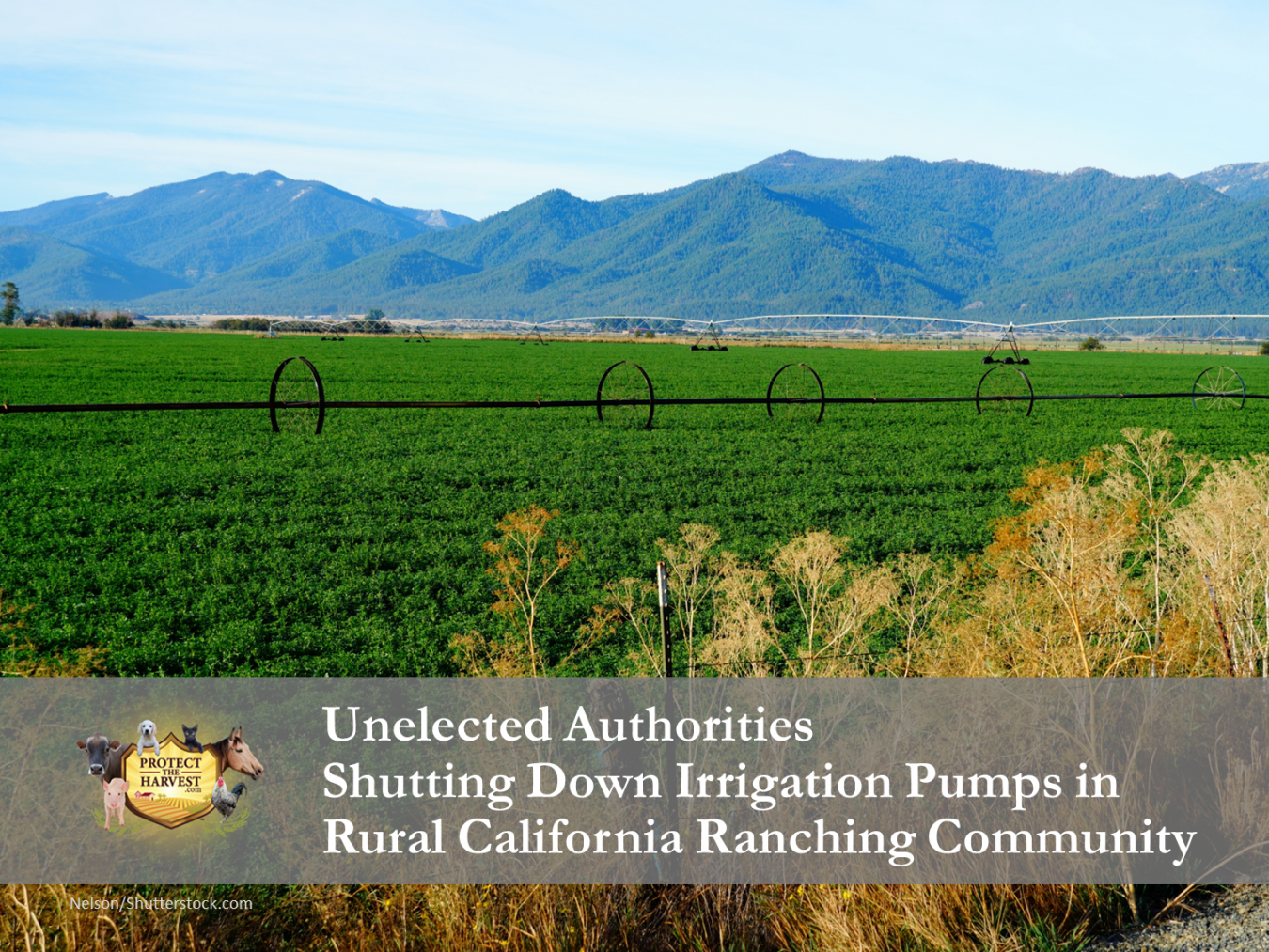 WATER IS BEING TURNED OFF IN RURAL CALIFORNIA COMMUNITY

These ranchers, fighting for their livelihoods, sure hope so.

“The truth is like a lion; you don’t have to defend it. Let it loose; it will defend itself.” Some people credit St. Augustine of Hippo for this quote. Whoever said it, small family farmers and ranchers in far-northern California are sure hoping it’s true. A group of them have banded together to tell their story: the State of California is turning off these farmers’ and ranchers’ irrigation pumps.

Yes, you read right. On July 14th, in one remote corner of rural California, the State turned off farmers’ and ranchers’ groundwater. It’s unprecedented and shocking, even considering this prolonged drought and the many gut-wrenching tales of water restrictions we’re hearing from across California.

While most of the restrictions by the State Water Resources Control Board (Water Board) are on surface water deliveries, the agency has now ventured into a new legal territory: it is turning off groundwater.

Aquifers Are Not Overdrafted

This is not happening in a part of California with large corporate farms or vineyards, but up in rural Scott and Shasta valleys in Siskiyou County, where multi-generational family farms and ranches grow mostly cows and hay. There are no massive public water projects storing and delivering water, no water imports, and no large and well-staffed irrigation districts, unlike much of the rest of the state.

Also, unlike other parts of the state, the Scott and Shasta aquifers are not over-drafted, according to U.C. Davis hydrologists.

California Bureaucrats Are Regulating How Much Water Livestock Can Drink

The State is being more heavy-handed in this region than anywhere else. Could it be that the Water Board is attempting to expand its jurisdiction? Is this a “testing the waters” with this small ranching community where there are no “Big Ag” lawyers or political sway?

Even more deranged, the harsh regulations on Scott and Shasta valleys don’t stop with turning off irrigation pumps: they even limit how much livestock are allowed to drink.

Theodora Johnson is a local rancher and spokesman for Scott Valley Agriculture Water Alliance (AgWA) which is a group that was formed in response to the Water Board’s regulations. Johnson reports that the Water Board’s restrictions on livestock watering make it even tougher for ranchers to stay in business. It is also a critical animal welfare issue.

When river flows drop below the monthly minimum level, Scott and Shasta ranchers are required to restrict their animals’ water intake. The regulation directs livestock owners to “self-certify,” under penalty of perjury, that their cattle and horses are being given no more than 15 gallons per head per day, and sheep are given no more than 1.5 gallons per day.

“This isn’t enough water, and animals should always be given free-choice water,” Johnson says. “We talked to experts and read papers on livestock water intake. Lactating cows need closer to 30 gallons per day, and sheep need up to 8 gallons per day. We told the Water Board this. They have since allowed for double the original allowable amount, but only on days hotter than 90 degrees. We believe it borders on animal cruelty to limit their water intake. They drink no more than what they need.”

In addition to livestock drinking water limitations, the emergency regulation severely restricts the use of earthen ditches to deliver water to livestock in the non-irrigation season, calling it “inefficient livestock watering.”

“Winter livestock watering via ditches is something we’ve done here in Scott Valley for probably a century,” says Johnson. “In the non-irrigation season, when flows in the river and its tributaries are abundant, we divert water into earthen, unlined ditches to water our livestock. These stock water rights are written into the decrees governing Scott Valley’s water.”

Johnson says winter livestock watering does more than supply stock with a reliable source of water during a time when pumps can freeze up. It also recharges the groundwater while surface water is abundant.
“U.C. Davis hydrologists who have studied our watershed for years recognize this side-benefit of winter livestock watering,” Johnson points out.

Fish May Not Be the Reason

If the Water Board’s precedent-setting actions in Siskiyou County take hold in the rest of the state, it could transform, if not destroy, California agriculture as we know it. The “reason” behind these new regulations? Ostensibly, to save fish; but a close look at the facts reveals that this might not really be about fish.

It all began last summer, under the auspices of an “emergency drought” proclamation made by Governor Newsom. In August 2021, the Water Board adopted a new drought regulation for the Scott and Shasta River watersheds, requiring that the two rivers maintain “emergency minimum flows” in order to protect fish. The flow levels were recommended by the California Dept. of Fish and Wildlife. Notices went out to all agricultural water users demanding that they turn off their surface diversions and irrigation pumps, because the rivers in both valleys were not flowing above the new “emergency minimum” levels.

According to Scott Valley Agriculture Water Alliance, the monthly flow minimums set for Scott River are “unattainable” in the summer and early fall months, except during very good precipitation years. The Scott River hasn’t met the new flow standards in 10 of the past 12 summers. The Scott is a snow-melt dependent stream, and snow has been scarce in recent years.
Yet, as AgWA points out, the Scott River’s fish populations have endured.

“The Water Board originally cited the coho salmon as being in danger of ‘extinction’ in the Scott River, and that’s why the minimum flows were supposedly needed,” recalls Theodora Johnson, a local rancher and spokesman for AgWA. Coho are listed as “threatened” under the state and federal Endangered Species Acts.

“But data from California’s own Department of Fish and Wildlife shows the Scott River coho populations have been significantly increasing over the past two decades and have been resilient in past drought years.”
When AgWA pointed out the coho facts to the agencies and the media, Johnson says the agencies had to change their tune.

“Now, the agencies publicly recognize that our coho are doing well, and that it’s thanks in part to our local conservation efforts over the years.”

Moving Targets and No Evidence

The messaging victory about the Coho Salmon did not cause the Water Board to drop its minimum flow targets on the Scott. Now, the agencies cite two additional species, Chinook Salmon and Steelhead Trout, as also needing the minimum flows.

“The problem is, steelhead population isn’t monitored enough to get an accurate population estimate,” says Johnson. “In light of the lack of data, the State is just handling us irrigators as ‘guilty until proven innocent’.”
As for Chinook, a commercially and tribally fished salmon, Johnson said the Scott has seen reduced spawning returns over the past five years, because Chinook adults need timely fall flows to access the good spawning gravels.
“Unless we get some better water storage, fall flows can only come when Mother Nature decides during these types of drought years,” Johnson says. “The State has offered no evidence that cutting off our irrigation pumps in the summer will improve fall flows enough to even come close to their required level. When we were 100-percent curtailed last September, the river didn’t bounce back until we got fall rains—just like any other year.”

Johnson adds that Chinook salmon conservation efforts had been underway in Scott Valley until the coho salmon was ESA-listed about 20 years ago. Then, all funding and political attention shifted to coho “recovery.”
“If given the chance, I know we could help the Chinook the way we did the coho—voluntarily, and in a way that doesn’t put farmers and ranchers out of business,” says Johnson. “Losing ag ground and replacing it with a subdivided, populated landscape can’t be good for any fish species.”

The Community Is Already Proactive in Recharging Groundwater

Johnson noted that, even though Scott Valley’s aquifer is stable and not over-drafted, locals have been proactive in recent years, looking for new ways to “fill the sponge” (recharge the aquifer) in the cool months when water is abundant. Research is underway on aquifer recharge pilot projects. However, Johnson says the new regulation has made it more difficult to do these projects.
“Decades of experience shows us recharging the groundwater in the winter works. It’s common sense,” Johnson says. “Doing this research can help us quantify that recharge, and strategically increase it to help improve stream flows. The Water Board should be facilitating these types of projects, not making them harder to do.”

Johnson says the only thing protecting Scott Valley’s farms and ranches from total failure right now is the fact that the State is allowing individual operations to keep pumping water if they agree to reduce their water use by 30 percent. These binding agreements are called “local cooperative solutions.”
“People get pretty ‘cooperative’ when they’re threatened with a 100 percent shut-off,” Johnson says. “No one wants to be the one to lose the family ranch. Many of us have been here for five or more generations.”
Only about half of the valley’s 32,000 irrigated acres are part of a “local cooperative solution” this year.

The rest must be fallowed.

If farmers violate the curtailment, the regulation threatens “fines, a cease-and-desist order, or prosecution in court.” Fines are $500 per violation per day. Some ranchers have already been fined for accidentally misfiling their compliance paperwork.

No compensation is being offered to Scott or Shasta farmers and ranchers for the loss of their water; unlike many other agricultural areas in California during this drought.

Johnson said AgWA plans to continue making sure the Water Board knows that this unfair treatment is not going unnoticed.

“The Water Board is officially tasked with regulating water in a way that is reasonable, balanced, ‘in the interest of the people and for the public welfare’,” Johnson says. “We think this regulation flies in the face of that mandate.”
She says AgWA will continue to speak out so that falsehoods—such as the “coho extinction” myth—don’t win the day. If truth is a lion, AgWA hopes this lion will fight.

To find out how you can help, please contact Theodora at theo@scottvalleyagwa.org.