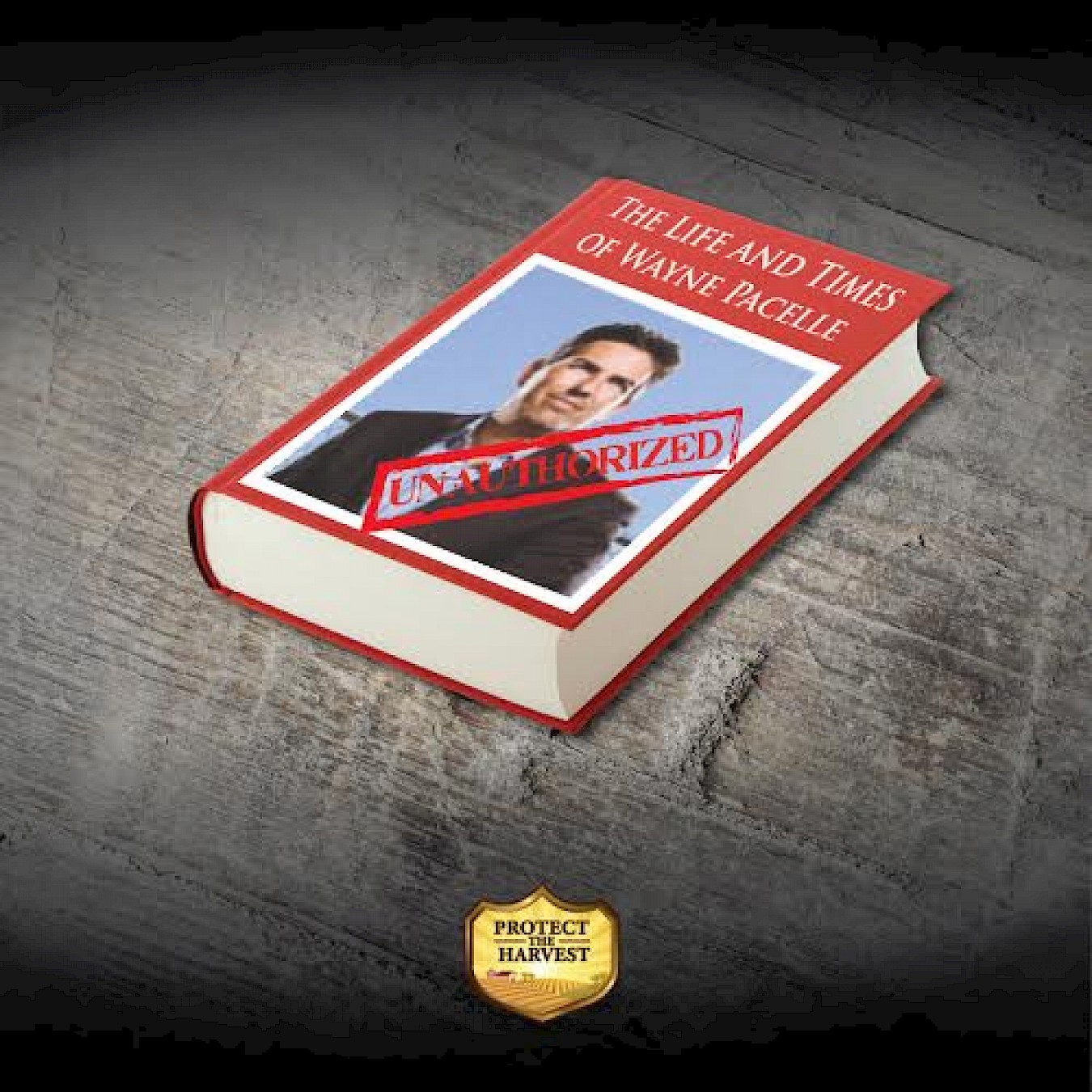 WAYNE PACELLE: THE LIFE AND TIMES OF A RADICAL LEADER - PART TWO

In Part 1, we covered Wayne’s time in college and working for The Fund For Animals. Today we detail his time at HSUS, both as a lobbyist and as its president. When Pacelle joined HSUS, he was brought on by his friend and HSUS VP David Wills. They were so close that they even got married during the same ceremony, causing a large HSUS scandal. Wills used HSUS donor dollars to pay for the lavish Mexican wedding that ended up getting him fired. During the same ceremony, paid for by HSUS donors, Wayne married his first wife Kirsten Rosenberg. Although they committed the same crime, using the donations meant for animals to pay for an over-the-top wedding, Wills took the fall and Pacelle went unpunished. HSUS Lobbyist For ten years, Wayne Pacelle acted as the HSUS chief lobbyist. Ironically, the founding document of HSUS plainly forbids legislative lobbying, stating that “No substantial part of the activities of the corporation shall consist of the carrying on of propoganda [sic] or otherwise attempting to influence legislation.”  But that has done little to stop their legislative activity and definitely will not now with a former lobbyist as their president. Throughout his life, at the Fund and with HSUS, Wayne Pacelle has been very active in many levels of government. As we mentioned in our previous article, he even ran for office under the Green Party. He has grown to be influential in Washington, and can be attributed with the passage and defeat of many bills in his time as a lobbyist on K Street and as president of HSUS. Some examples of the legislation he pushed were to ban the use of bait and dogs in the hunting of bears, cougars, and bobcats in Colorado (Amendment 10, 1992 – while still at the Fund), Massachusetts (Question One, 1996), Oregon (Measure 18, 1994) and Washington (Initiative 655, 1996). He also helped with the ban of the use of certain traps in California (Proposition 4, 1998), Colorado (Amendment 14, 1996), Massachusetts (Question One, 1996), and Washington (Initiative 713, 2000). Most of his legislation at the time was geared towards limiting or ending certain hunting practices across the nation. However, he did more than pass bills; he spent much time defeating bills that he viewed as hostile to HSUS’s vegan agenda as well. Some of the campaigns against bills he successfully defeated include Proposition 197 in California which would have changed the voting requirements on laws regarding mountain lions from a 4/5ths to a simple majority (1996), Measure 34 in Oregon which would have allowed hunters to use bait and dogs in hunting (1994), and Proposition 201 the Fair Gaming Act in Arizona (2002). He continued his activity in legislation throughout his years of president. Pacelle has taken an organization that once had a simple goal of fighting to end cruelty (not pushing veganism on the public) – and has turned it into an aggressive and radical animal rights and vegan advocacy group. Although they were beginning their legislative activism before his tenure, he certainly took it to the next level. With their huge budget (brought to them through questionable fundraising practices) and Pacelle in lead, HSUS has turned radical vegan activism into big business that flexes its muscles in courtrooms and legislatures across the country. During his time as a lobbyist, Pacelle became more sophisticated. He was no longer physically confronting hunters or following them in the woods to scare away their prey. His activism took a legislative, and dangerous, turn. Then, in 2004, Pacelle agreed to take the position of President of the Humane Society of the United States. The changes in the organization since his takeover are evident.  In fact, soon after he took over as president of the organization in 2004, Pacelle absorbed his past organization, the Fund For Animals, and turned it into the lobbying arm of HSUS. Now called the Humane Society Legislative Fund, it is an essential part of his quest to increase HSUS political power and influence. Other organizations that they took over were the Ark Trust, Doris Day Animal League, and the Association of Veterinarians for Animal Rights. Along with the takeover of these other organizations, Wayne Pacelle facilitated many changes within HSUS itself. After just 10 weeks of holding his position, he had already implemented a “no animal products in the office” policy, and soon after sent out a memo to all employees urging them to convert to a vegan lifestyle and explaining a new food policy for the organization. It is easy to see how Pacelle’s radical leadership at HSUS has influenced the organization. HSUS President Considering his position, it is somewhat understandable that Wayne Pacelle would claim he does not hold the thoroughly ingrained radical beliefs of his youth anymore. However, many think that these claims are just to ward off negative media attention. Does he still not think animals are cute? Does he still think that they should be left alone, and does he still not care about the survival of domesticated animals? A statement from Wayne’s 2008 girlfriend, Christine Gutleben, describes how he acts around her cat Libby, and captures exactly how he feels about domestic animals:

For years, Pacelle did not even have a pet. But when Gutleben moved in with him, she brought along her cat, Libby. "He's interesting with animals," said Gutleben, 30. "He doesn't want to bother them or invade their space. He's like 'Hello, Libby.'" She imitated a formal, masculine voice, then laughed. "I just want to swoop her up and bury my head in her fur. He just lets her be. So, of course, she just crawls on the counters and he lets her crawl up and sit on his chest. If he needs to work, he'll ask me to remove her."

This is fascinating imagery, as he seems to not even remove the cat himself, but asks his girlfriend to do it instead. Despite his talk of change and growth he sees animals as he always has, individuals that should be left alone, and his inability to even pick up a cat off of himself so that he can work shows how ingrained that belief is in him. Five years later he married Lisa Fletcher, an award winning television journalist, investigative reporter, and news anchor who has worked as a correspondent for ABC News and various other major television stations. She hosts The Steam on Al Jazeera America which is based in Washington, D.C. Pacelle also showed the world that support from the Humane Society can be bought. After a $50,000 ‘donation’ from the Philadelphia Eagles, Wayne Pacelle actively and personally participated in the image rehabilitation efforts for Michael Vick, the most notorious dog fighter in U.S. history. He is even quoted saying that Vick “would do a good job as a pet owner.” On top of his public support for the convicted criminal, Wayne fundraised with images of Vick’s dogs while lobbying to have them killed. Breaking a deal with the U.S. Attorney General that they would not bring cameras or take pictures of the dogs (for reasons pertaining to the case), HSUS officials went to the 6 local animal shelters that had taken in the dogs and photographed them with people wearing HSUS shirts. Using these photographs, they released ads which claimed the money you donated would go directly to helping those animals. After he was out of prison, in a radio interview with Wayne, Vick said his was “a different kind of loving dogs.” Rather than denounce Vick for such a statement, Wayne, a supposed animal protection advocate, agreed. He responded, “Obviously people who are involved in dog-fighting … they really do value the animals in certain ways.” In a different case in 2009, HSUS led the charge to slaughter 150 dogs that were seized from a dog fighter in North Carolina. Each dog was put to death, and they even ordered a foster parent of a two-week old puppy from one of the fighting dogs to return the dog that she had given a loving home to so that it could be killed. Despite the dog’s young age, HSUS testified in court that none of the animals (yes, not even the two week old puppy) were able to be rehabilitated and should be put to death. More than just testify for the death of some animals, HSUS has been actively fighting legislation that would have implemented a no-kill shelter mandate in areas of the United States. Wayne Pacelle personally wrote a letter to a California Commission that took up the issue of a San Francisco becoming a no-kill city, arguing that shelters should not be regulated – despite their insistence on farm regulation and the increasing amount of media showing animal neglect and abuse at kill shelters. One moneymaking ploy HSUS has been accused of in the past is profiting from natural disasters. HSUS has shown a pattern of misrepresentation when it comes to campaigns for disaster relief. Well known for their alleged corruption involved with Hurricanes Katrina and Sandy, and the Moore Tornado, HSUS made piles of cash exploiting the local people - and for those transgressions earned several lawsuits putting them under investigation. They advertised the premise of reuniting lost animals with their owners, but in actuality little of the money went to that purpose. Yet, in both Mississippi and Louisiana, the lawsuits were dropped. The claws came out when they couldn’t get their behavior swept under the rug in Oklahoma like they did in Mississippi and Louisiana, and they turned around and sued the Attorney General of Oklahoma, Scott Pruitt, to block his investigation into their Moore Tornado fundraising and how they spent that money. Currently, lawmakers in the state of Indiana are even urging for an investigation into HSUS and its fundraising practices. All facilitated under and perpetuated by Wayne Pacelle, the Humane Society of the United States is taking the hard earned money of American citizens under false pretense and instead of directly helping animals with it they stash it away in the Cayman Islands or use it on advertising (to make more money). Worse than spending their donor dollars on ‘investments’ in the Caribbean, enormous salaries, and more fundraising, HSUS was forced to pay part of a $15.75 million settlement in a racketeering lawsuit after allegedly paying off a witness in a case against the Ringling Bros. Circus. Although their insurance covered most of the settlement (that’ll do a number on those insurance rates), their financial statements show that they paid $5.7 million of the total. The Racketeer Influenced and Corrupt Organizations (RICO) Act was originally created to go after the mob. When a payment scheme from the organizations to lawyers to witnesses was discovered, with Wayne Pacelle having signed one of the payoff checks himself, the Ringling Bros. sued the ASPCA and HSUS in the RICO courts. These are not the actions of a charitable organization. Non-profits do not go to these extremes. It is because of this toxic environment that Wayne Pacelle has helped create at HSUS that Charity Navigator revoked its charity rating and put out a donor advisory against it. We hope that this in-depth look at Wayne Pacelle and his involvement with animal rights radicalism has answered all of your questions about his merits as an individual and leader. This dangerous influence has spread throughout his organization. Much like children often take on some of their parents’ personality traits, any major organization eventually takes on the personality of its leaders, and in this case it seems the apple doesn’t fall too far from the tree.     * We'd like to thank our sources for this piece, especially Nathan Winograd and HumaneWatch.
Prev Article
Comedian Trolls PETA Circus Protest
Next Article
Resolution Passed Calling on 11 States to Investigate HSUS