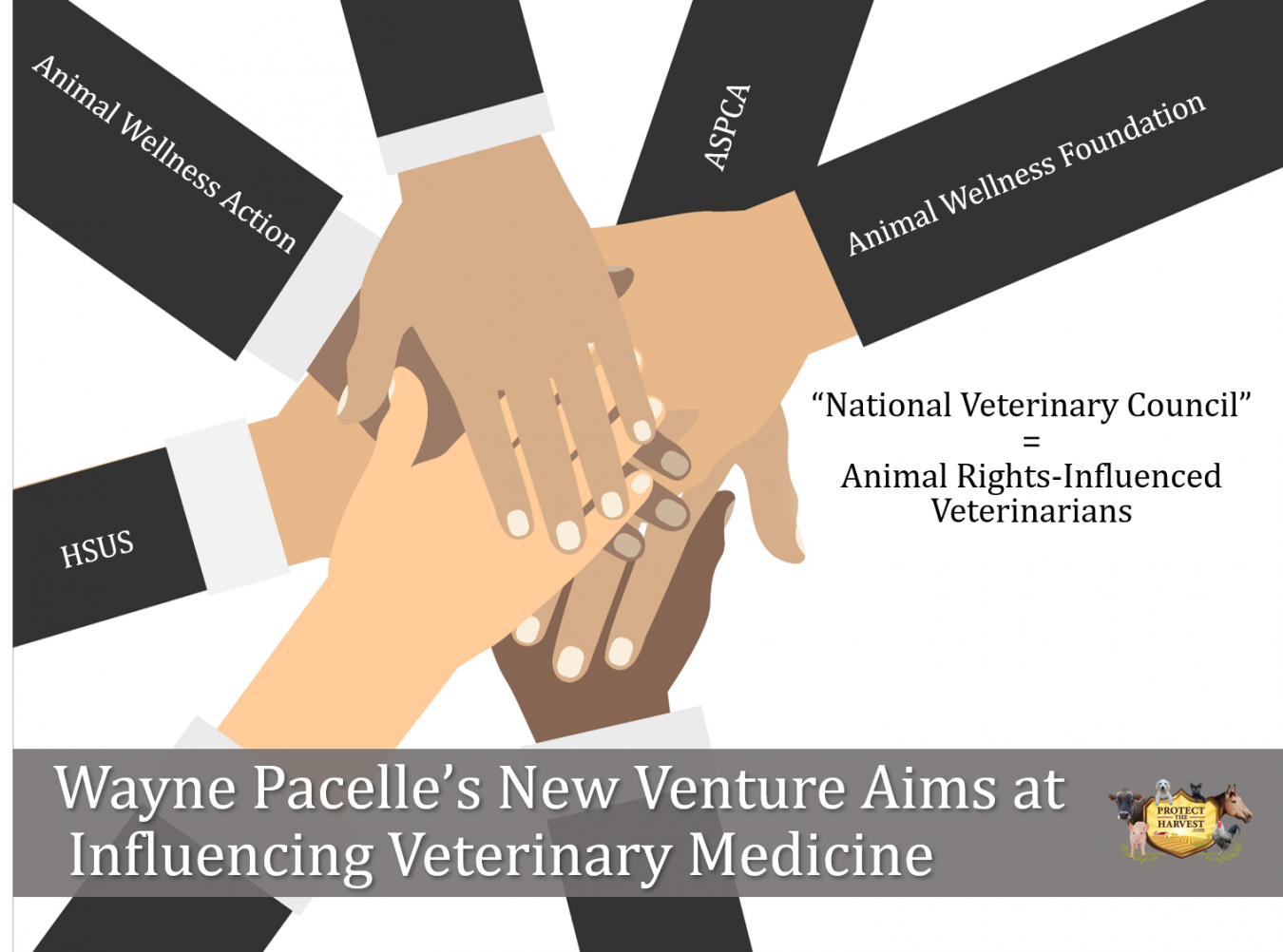 Introduction of the National Veterinary Council
For the last few years, a new wave of animal extremist infiltration has been aimed at veterinary medicine. The goal is to control the conversation revolving around animal welfare. The target of this influence is veterinary students, new veterinarians, and technicians via continuing education courses offered to long-standing professionals. Wayne Pacelle (disgraced ex CEO of the HSUS) founded Animal Wellness Action, a sister organization to the Animal Wellness Foundation, to create a “National Veterinary Council”. This council with its purposely misleading name, according to their website, is claiming to, “…put veterinarians in the forefront of animal advocacy, helping animals on the ground but also working to prevent cruelty by promoting public and corporate policies to help animals. It will work with our staff members to drive a range of reforms.”
Funny that this new “council” is claiming to “put veterinarians in the forefront of animal advocacy”. Veterinarians already are at the forefront of animal advocacy and have been since the dawn of the profession.

Veterinary Professionals are Being Influenced by the Animal Extremist Movement
Veterinarians are a respected and trusted source of information when it comes to animal health and welfare. Unfortunately, because of that, groups like PETA, the HSUS and others push their agenda in veterinary schools to attempt to shape the students prior to their entering the workforce. Examples of dangerous ideas include: encouraging anthropomorphism by viewing animals as “fur babies”, “adopt don’t shop”, guardianship for animals, spay and neuter all animals, client shaming those who choose to breed or purchase purpose-bred animals, and disparaging animal research. All of these ideas have grave consequences that actually make a veterinarian’s job much harder, and if carried to the full extent of animal extremist ideology, obsolete.
Veterinarians are trained scientists, and we hope they continue to use scientific facts to guide their practice rather than emotions that have been manipulated by the animal rights movement.

The Veterinary Council’s Members Have Direct Ties to Animal Extremist Movement
It comes as no surprise that some members of the Animal Wellness Foundation’s National Veterinary Council have direct ties to major animal extremist organizations and their initiatives. One member is currently a visiting fellow in Harvard Law School’s Animal Law and Policy Program, focusing on animal extremism and policies that can reduce the use of livestock, dogs, cats and primates in federally funded in-house research programs. Another is the former Medical Director and current Vice President of the ASPCA Animal Hospital in New York. The ASPCA is an animal extremist group with affiliations and partnerships with radical animal extremist organizations. Other veterinarians in the group have ties to Wayne Pacelle and Marty Irby, both of whom are former “higher-ups” within the HSUS. One of their members is the founder of a radical animal extremist non-profit that drives around showing horrific scenes of animal abuse in order to “inform” the public. These connections to animal extremist groups and agendas clearly show the motives behind their intended “reforms”. The motivation is not animal welfare, it is spreading the ideology of animal extremism, ending animal agriculture and animal ownership.

Our Concerns with Their Initiatives
Some of the initiatives they have publicly stated they plan to “reform” include:
• “Horse Issues” – soring and “wild horse advocacy”.
• “Stop and Frisky” – education of law enforcement when confronted by dogs at a property.
• “Mutilation” – working to outlaw declawing, ear cropping, and tail docking.
• There is also praise for the PACT Act and they are wholly against Greyhound racing.

Horses
Their website describes “horse issues” as one of their intended “reforms”. This raises both concerns and questions. This National Veterinary Council claims to want to outlaw soring, but soring is already outlawed and has been illegal for over three decades. When it comes to “wild horse advocacy”, it won’t be a surprise which method they will push. Their founder’s previous involvement with HSUS makes that an easy guess. The patent for PZP, an inhumane birth control injection used on rangeland horses, is owned by the Humane Society of the United States. PZP has proven time and time again to be inhumane because the mares continue to cycle. It is not near as useful or effective as PZP supporters claim, yet they will continue to push its use. Could that be purely for financial reasons?

Preventive Care and Elective Procedures for Working Animals
The wholesale outlawing of tail docking, removal of dewclaws and ear cropping sets a dangerous precedent when it comes to animal husbandry. It is true that these elective procedures can be purely cosmetic. However, for many working dogs across the country, they serve an important purpose and are not simply cosmetic. These procedures are often performed to keep the animals safe and healthy when working. For example, a tail is easy to get caught or lost altogether when dogs work cattle. Having a docked tail at a young age is much more humane for a working dog than the potential of sustaining a life-threatening injury. The same goes for dewclaws that can snag and tear on underbrush and cause great pain and distress to working dogs.
This type of language and the in-common disregard for the reason things are done seem very similar when comparing it to our concerns about the PACT Act. Veterinarians know the value of having the option to perform these elective procedures. They are normal and customary animal husbandry practices, just like branding, vaccinating, and using a squeeze chute. It should be up to the animal owner and their veterinarian to make decisions about the care and wellbeing of animals, not a “council” made up of fringe veterinarians that ascribe to a radical ideology.

Anti-Greyhound Racing
The Animal Wellness Foundation’s website calls for an end to greyhound racing. Not only does this show a gross misunderstanding of the nature of racing dogs, it also shows a lack of understanding about their treatment and care. Last year, due to an anti-greyhound racing amendment an entire segment of Florida’s economy, employing thousands of people, was abolished in a fell swoop. We’ve shared information about the racing industry and urge anyone unfamiliar with the way the dogs are treated and rehomed after they retire, to check out both our articles, as well as the Greyhound Chronicle’s website.

How Is This Council Different from Other Animal Extremist Organizations?
How is this National Veterinary Council different from the HSUS or any other animal extremist organization? The truth is, it’s not. While they can tout a council made up of veterinarians, a profession easily seen as the most respected and trusted when it comes to animal welfare, all they have done is put together a group of fringe veterinarians that ascribe to the animal extremist ideology. Making veterinarians the face of the organization is an attempt to give merit to their ideology. However, veterinarians who understand the real situation can see right through that.

The Public Shares Apprehension of Council with Veterinary Publication
It seems that we aren’t the only ones that can see right through them. In an article about the National Veterinary Council on the website Today’s Veterinary Business, commenters shared their apprehension regarding the integrity of the group. One shared: “Gee, do ya think they'll lecture us about not breeding and only acquiring from non-profits?”, while another said: “I think the Veterinary community should be more concerned with educating the public about animal welfare and animal husbandry. Yet with these two "non" profit organization it pushes the animal rights propaganda.” We believe this one got it right when they said: “Wanna bet this is just one more attempt to separate you from your pets OR your food??????”. These reactions are significant because they show an awareness of the tactics of these groups in the veterinary industry and resentment towards the goals of animal extremist ideologues. It is important to remember that the animal extremist movement is being pushed by a small, all be it well-funded, minority and that they don’t represent the values of all veterinarians or animal owners.
We have to ask though, why would a publication dedicated to the veterinary medicine industry share a glowing article about this organization? It seems they do not realize the ultimate goal of animal extremism is eliminating animal ownership. If they were aware, they would know that supporting an organization like this could lead to the demise of veterinary medicine. No pets equal no need for veterinarians.

The Group’s Name is Misleading and Manipulative
We want to point out that blatant manipulation is being used here by calling this animal extremist group a “national veterinary council”. The name is meant to trick the public into thinking that the legislation they will be pushing is supported by all veterinarians, when it is truly a small, fringe group that believe in the animal extremist ideology. Just as the Humane Society of the United States plays on the fact that most believe their donations go straight to funding local shelters or supporting actual animals, when in fact, those dollars go to pushing specific animal extremist legislation and paying huge salaries. The Humane Society of the United States does not run, own or operate any shelters in the US. This “national council” is not a governing body of veterinarians. That is left up to state veterinary organizations and the AVMA - American Veterinary Medical Association.

Protect The Harvest Warns of Changing Culture within Veterinary Medicine
The inception of this “veterinary council” is concerning, but not a surprise to us. We urge our followers to be aware of the attempt by animal extremist organizations to change the culture within veterinary medicine. It is important to take your animals to a veterinarian you feel aligns with your values. Remember the animal extremist goal of this shift is to implement change far beyond the exam and treatment room.
At its core, it is clear the animal extremist based “National Veterinary Council” aims to make national changes to animal policies. Please be aware of legislation that will undoubtedly come forward. Take time to investigate those who are pushing the change. Protect The Harvest has always been, and will continue to be, an advocate for animal welfare. That means we will continue to inform and educate the public about the activities and dangers of animal extremist groups.